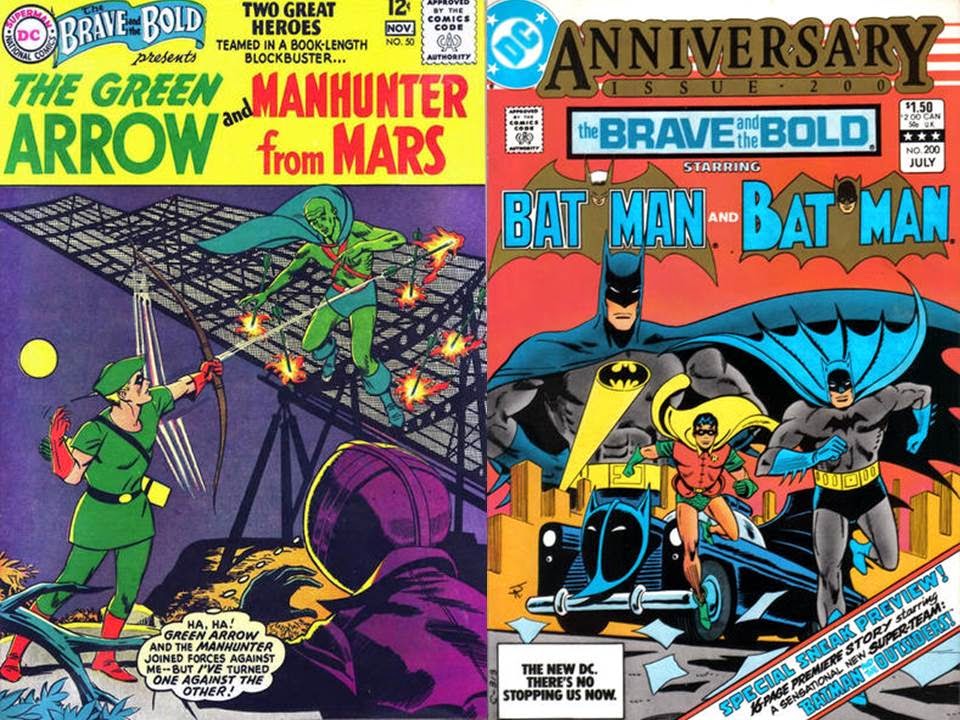 Green Arrow was one of the first two heroes in a team-up in Brave and the Bold when the title became a place for DC heroes to meet starting with Brave and the Bold #50 (October, 1963)...and Batman was so popular (thanks in part to the 1966 TV Show) that he became the regular star of the title (so awesome, he teamed with himself in the last issue of the series (Brave and the Bold #200, July, 1983, though, sadly, never with the Manhunter from Mars, at least in B&B).

So, it seems obvious that Batman and Green Arrow would be the most frequent team-up of the B&B era!  Let's take a look at these meetings.... 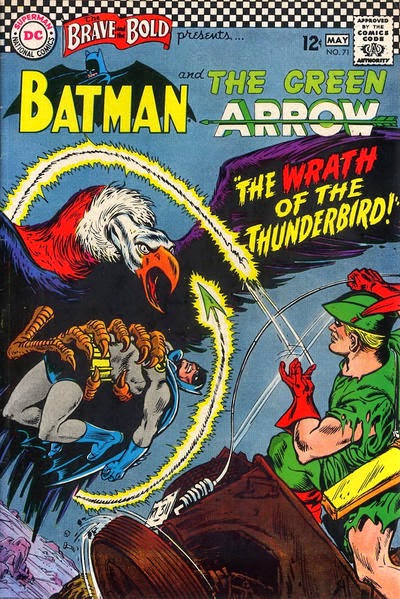 Brave and the Bold #71 (April-May, 1967) has the first B&B teaming of these two heroes, in a story by Bob Haney (who started the team-ups in B&B #50), with art by George Papp (the co-creator of Green Arrow), all under a cover by Carmine Infantino (who was the artist who started Batman's "new look"...which included the yellow oval).


"The Wrath of the Thunderbird" was a pretty simple story of Batman and Green Arrow facing off against a crooked promoter and save an Indian tribe..

...a reflection of what the average team-up was like at the time, but boy was that to change!


The Times Are A Changin' 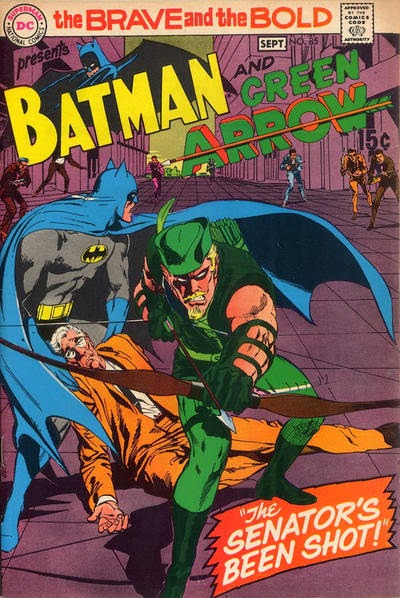 Brave and the Bold #85 (August-September, 1969) was Bob Haney's second Batman/Green Arrow story, but the first for new artist...Neal Adams, who got to redesign Green Arrow's look for the issue (as Green Arrow had no individual feature of his own at the time).

This led to Green Arrow getting paired with Green Lantern (and Neal Adams getting the art assignment there as well with writer Denny O'Neil, creating the very famous pairing and socially relevant comics...) .


But it all started here with "The Senator's Been Shot!" in a story that's been reprinted more than a few times as well! 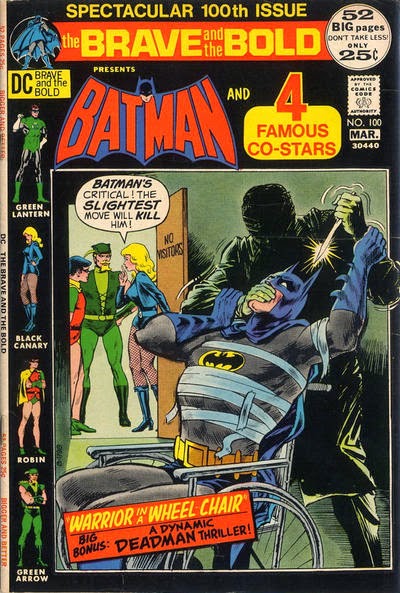 Brave and the Bold #100 (February-March, 1972) had a story by Bob Haney, and art by Jim Aparo (with a stunning cover by Nick Cardy).  For the anniversary issue of B&B, Batman was nearly killed by a gangster's bullet, and met with Robin, Black Canary, Green Lantern and Green Arrow...

...and the lot of them gathered to prevent a shipment of drugs from being dumped in Gotham and make sure Batman recovered from his wounds.


"The Warrior in the Wheel-Chair" has been reprinted in color, in the first volume of the Legends of the Dark Knight: Jim Aparo hardcover. 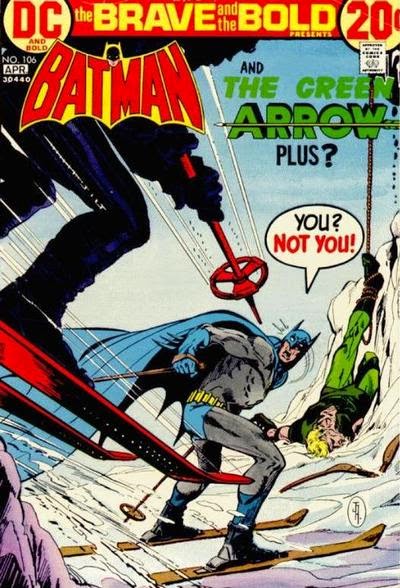 Brave and the Bold #106 (March-April, 1973) had Batman and Green Arrow face off against a mystery villain that was defrauding people in a double your money scheme...and that might suggest which Batman villain that was the ?.


This story was by Bob Haney and Jim Aparo, and was the first time Jim Aparo got to draw Green Arrow on a B&B cover...but it wouldn't be his last.


"Double Your Money...And Die" also made it into the first volume of the Legends of the Dark Knight: Jim Aparo hardcover, and Green Arrow would face that mystery villain again in the pages of B&B! 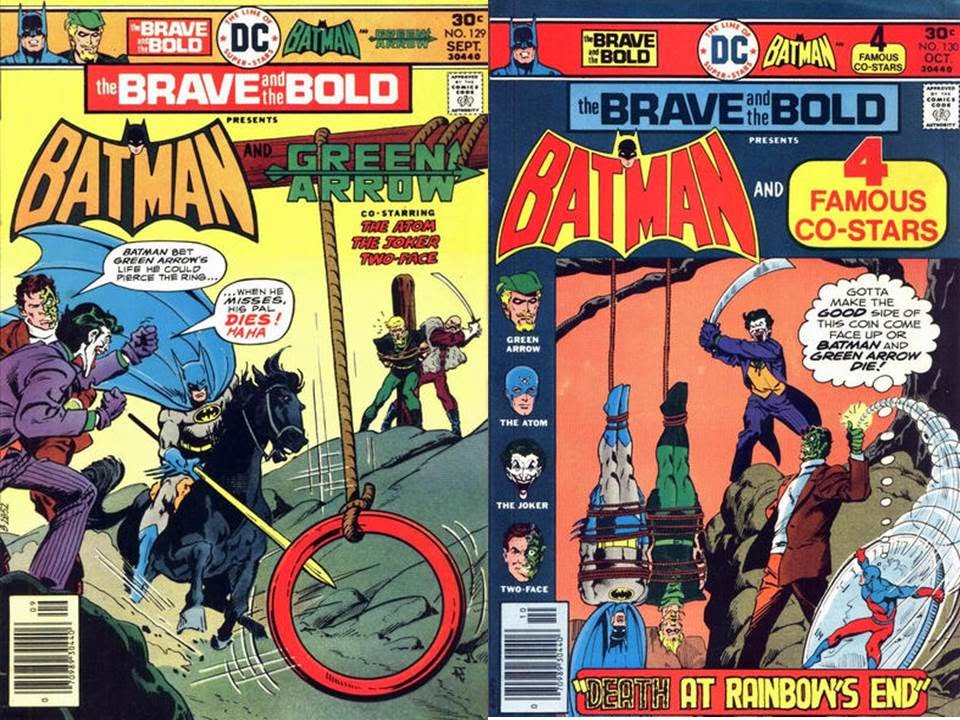 Brave and the Bold #129 and 130 (September and October, 1976) was Green Arrow's only two-parter with Batman...and added additional hero, the Atom, as well as two Batman villains (the Joker and Two-Face, both of whom had been in B&B before) to the mix in a story by Bob Haney and Jim Aparo, wherein Oliver Queen gets the Pathanistanian Emperor Eagle, and has to return it to its homeland, all the while fighting with Joker, Two-Face and General Mahmood Khan (with the help of Batman and Atom).  Wonder if some variant of this story might show up on the CW's Arrow as Atom will be a guest there this year?

These stories are also reprinted in color in the second volume of the Legends of the Dark Knight: Jim Aparo hardcover. 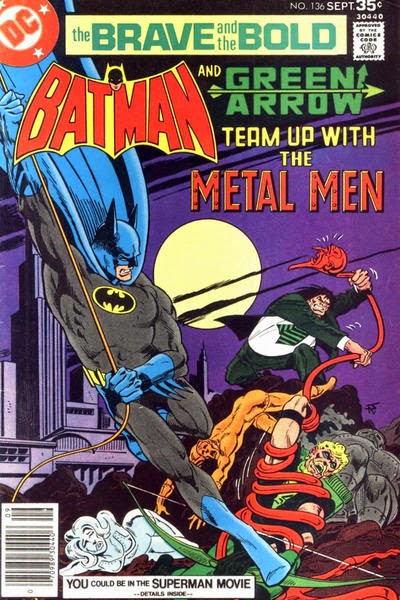 True, it was just another story by Bob Haney and Jim Aparo, but along with Green Arrow, it featured the Metal Men (robots of Dr. Will Magnus that fought evil and exhibited the properties of the metals they were made of), as well as reoccurring Batman B&B foe and femme fatale Ruby Ryder - who was previously in B&B #95, 123 and 135, menacing Batman, Plastic Man and Metamorpho).

"Legacy of the Doomed" (along with all but Ruby's first appearance) all made it into the second volume of the Legends of the Dark Knight: Jim Aparo hardcover. 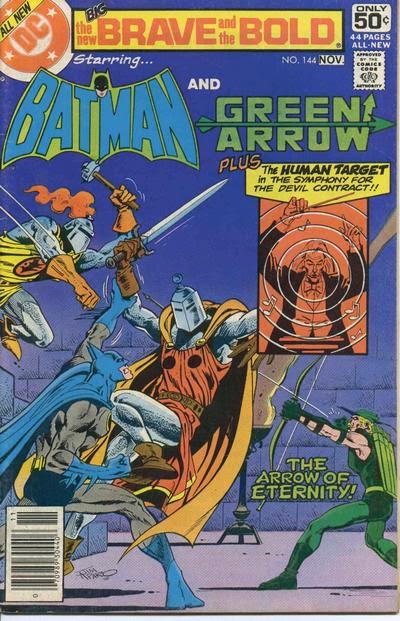 Brave and the Bold #144 (October-November, 1978) featured Bob Haney's last Batman/Green Arrow tale (with art by Jim Aparo) but it was a chance for him to return an old villain as well, the Gargoyle (whom had been a foe for Robin in two issues of Teen Titans, #14 and 35, for those that want to know, in two stories written by Bob Haney, who was also the co-creator of the Teen Titans).


This time Batman and Green Arrow faced the Gargoyle over an enchanted arrow..."The Arrow of Eternity".

This story also ended up in the second volume of the Legends of the Dark Knight: Jim Aparo hardcover.


Meet the New Boss, Same as the Old Boss 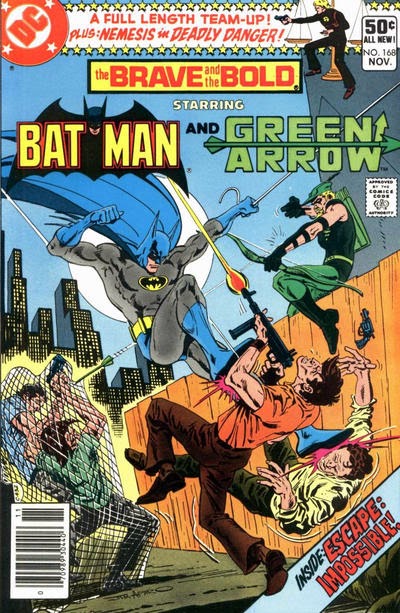 Brave and the Bold #168 (November, 1980) began with adding a new writer to the Batman/Green Arrow pairing, that of Cary Burkett, but at least Jim Aparo was still providing the art.


This time around, Batman was helping Green Arrow by introducing a friend's escape artist act...

...an oddly friendly thing for the "grim and gritty" Batman to do.  Still, it was something for this B&B team to do to while away the time... 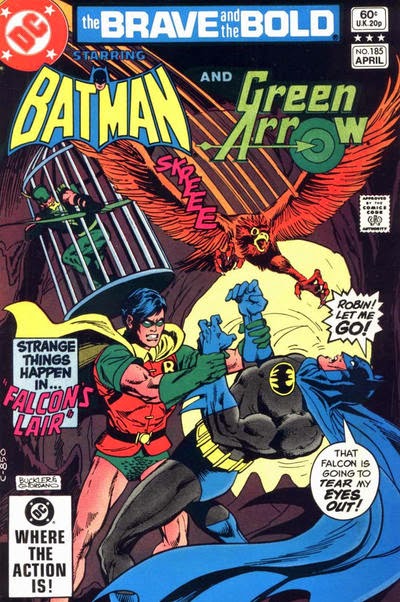 
"The Falcon's Lair" has not been reprinted, but at least the cover featured the newer Green Arrow logo...which had made it onto Green Arrow's first mini-series as well.

Batman and Green Arrow weren't done teaming up either, still working together in the Justice League, and even in more than a few issues of Detective Comics. 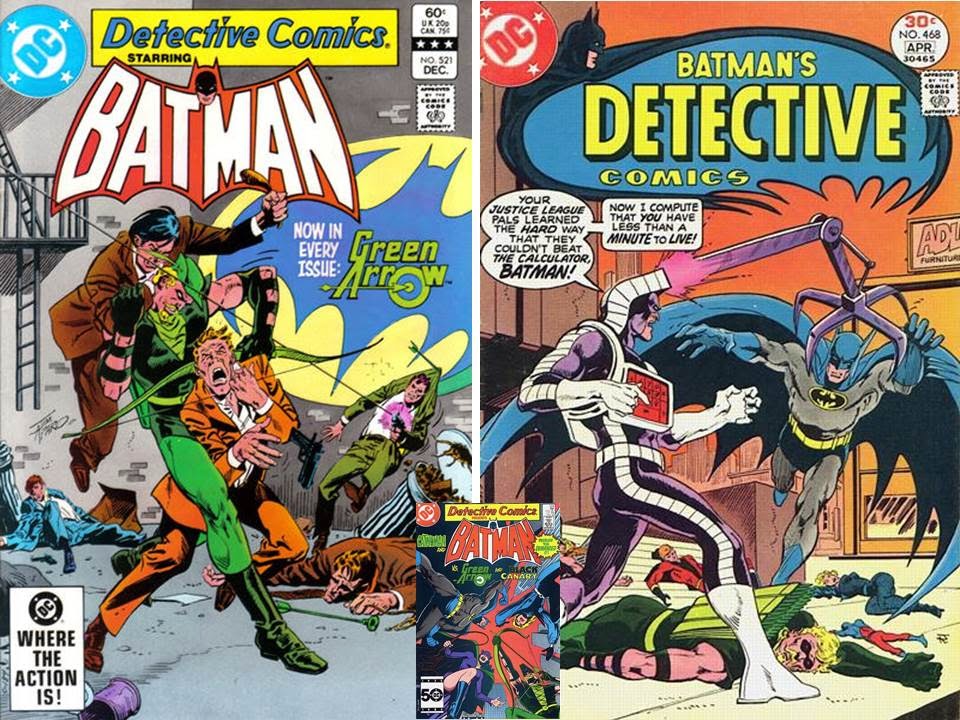 Green Arrow ended up as a back up feature there for a time, and some notable appearances include #468 with Atom and Black Canary, and #559 with Black Canary and Catwoman)....but those team-ups can be covered at a later date, as can Batman's B&B team-ups with "Team Arrow" members Black Canary and Speedy (though Speedy was with the Teen Titans).