Arrow Hits The Man Of Steel 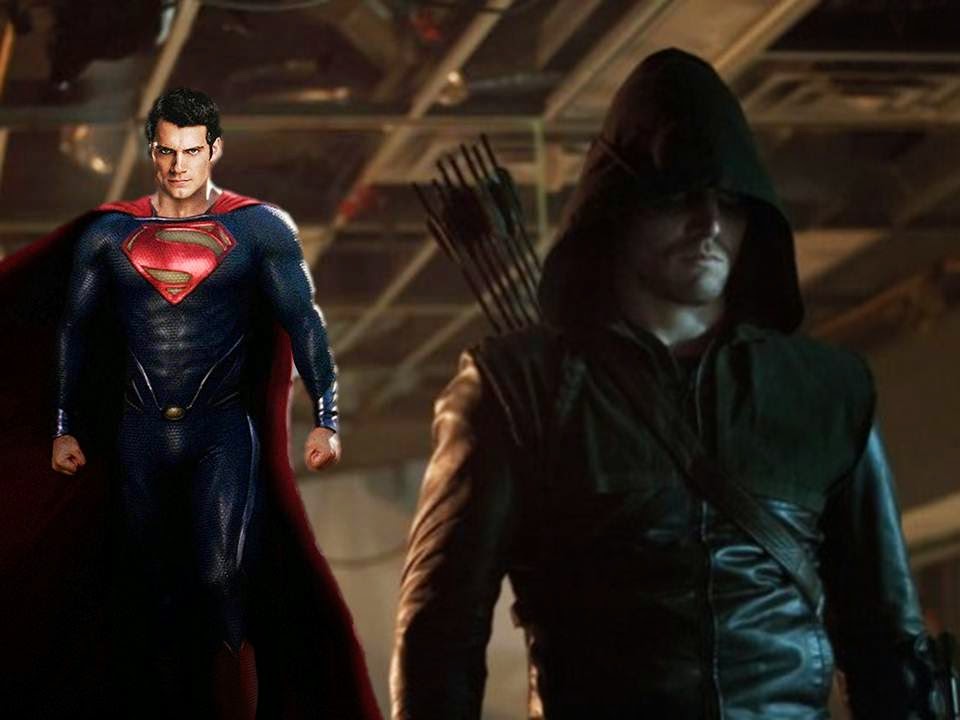 Well, sometimes Ollie and Clark weren’t the best of friends, so the Emerald Archer might have wanted to hit the Kryptonian Crusader, but for the most part their relationship was cordial.
And, it isn’t a small screen/big screen crossover that brings them together (though Arrow is enjoying success on the CW, and the Man of Steel sequel will be rocketing into theatres….).

It took a while for these two characters to meet, and it was while they were young! 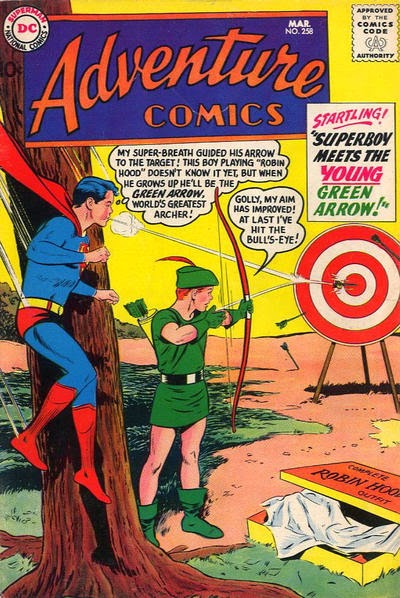 In Adventure Comics #258 (March, 1959) in a story by Jerry Coleman and George Papp entitled “Superboy Meets The Young Green Arrow”…well, that’s what happened!  Superboy creates a “time-viewer” and learns about Green Arrow and Oliver Queen’s future, and tries to steer the young, spoiled rich lad in a better direction by getting him into a Robin Hood costume…though Oliver shows no ability to wield a bow and arrow, and he and his family move away from Smallville (with Ollie eventually ending up on an island, and adopting the Green Arrow identity without Kal-El’s help).  Green Arrow even returns the favor to Superman, when in Adventure Comics #266 (November, 1959) when Ollie and his ward, Speedy (Roy Harper) make some new arrowheads out of green rock they found outside the Arrowcave…arrows which seem to mysteriously disappear for a time…until Superman explains that green rock is kryptonite! 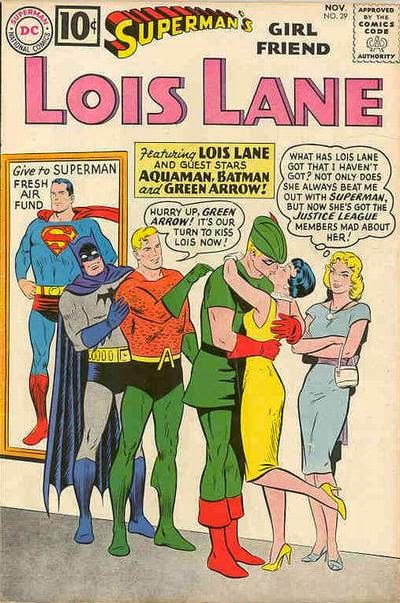 This issue is the first meeting of Green Arrow and Superman (and one of the earliest crossovers, as at this time, DC characters didn’t interact much…other than the Justice Society of America and the Seven Soldiers of Victory…the Justice League hadn’t had their first appearance even!), and happens even before Green Arrow has met Batman (though Superman and the Darknight Detective have been friends for some time, and Green Arrow meets the Gotham Guardian soon enough…).

In fact, along with Aquaman, Batman and Green Arrow compete for Lois Lane’s affections in Superman’s Girlfriend, Lois Lane #29 (November, 1961), after Green Arrow has joined the Justice League.

A League of their own 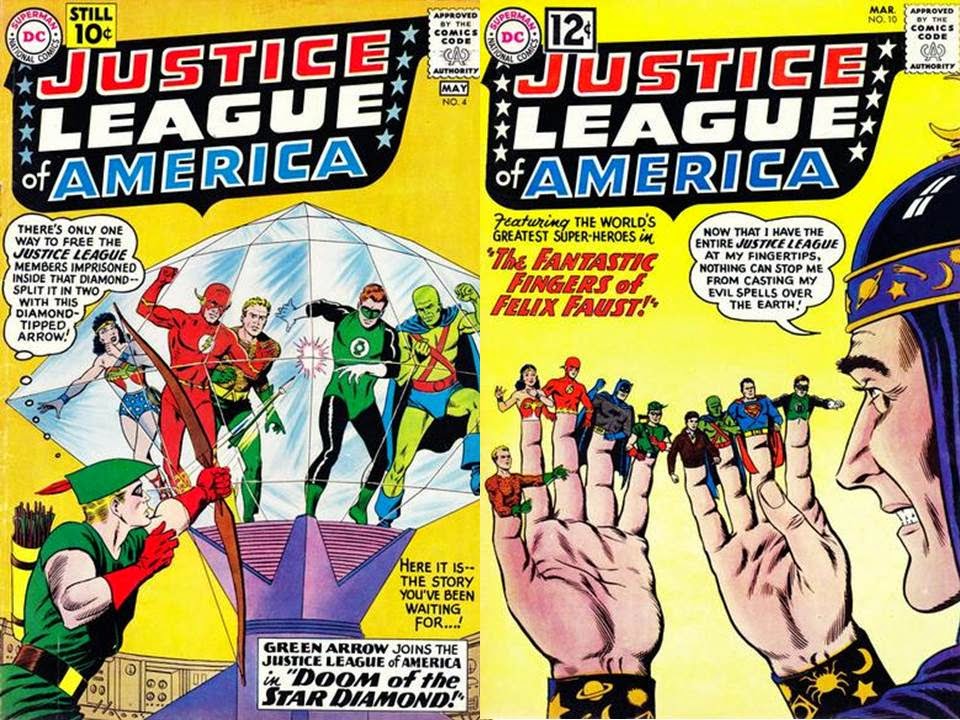 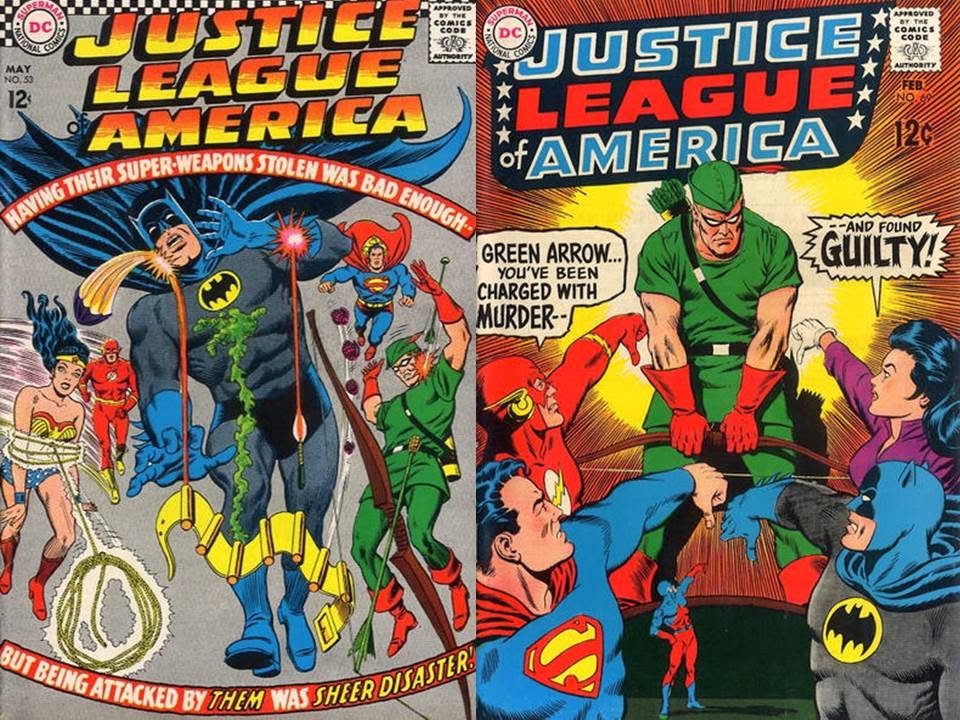 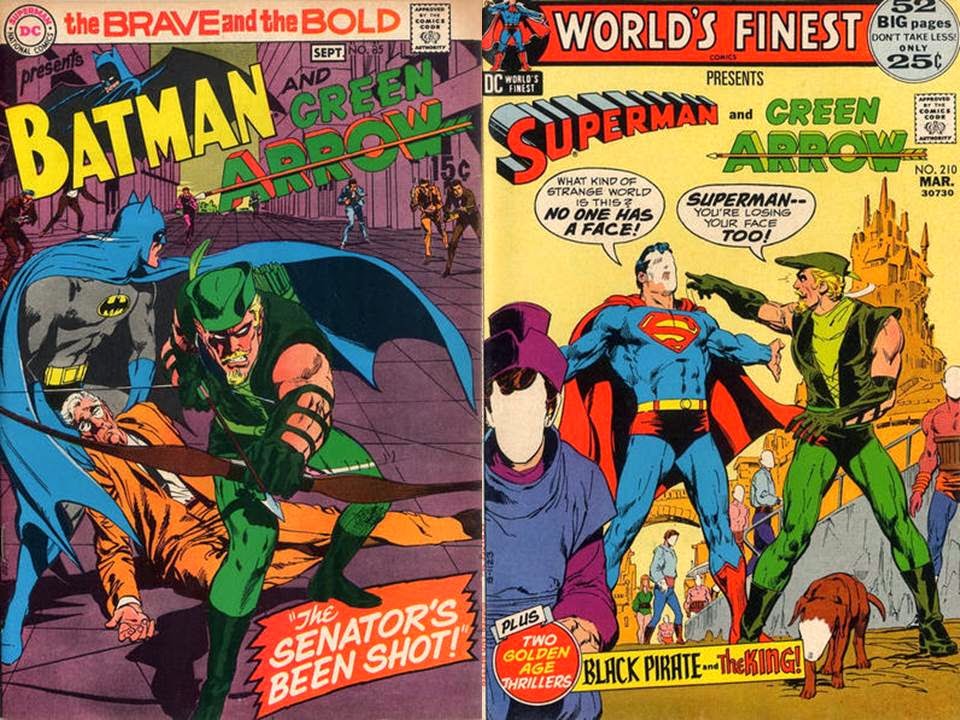 …and Green Arrow needed the help, as he had become homeless (losing his Adventure Comics spot with #269, and even his back up behind Superman and Batman in World’s Finest Comics with #140, so other than Justice League of America (and their guest appearances), Green Arrow only had Brave & the Bold and meetings with Batman to look forward to!  In Brave & the Bold #85 (August-September, 1969), Green Arrow got a new costume (by artist Neal Adams, who had major influence on Green Arrow’s life), and in Justice League of America #75 (November, 1969), Ollie lost his fortune….and that led him to work with Green Lantern, in a hard travelling run from Green Lantern #76-89…and Clark Kent stopped by in Green Lantern #87 (December-January 1971-1972) to give Ollie a little advice (and led into a somewhat unrelated adventure in a magical land with Superman in World’s Finest Comics #210 in March, 1972, when DC was experimenting with having Superman team up with others besides Batman for a little while….). 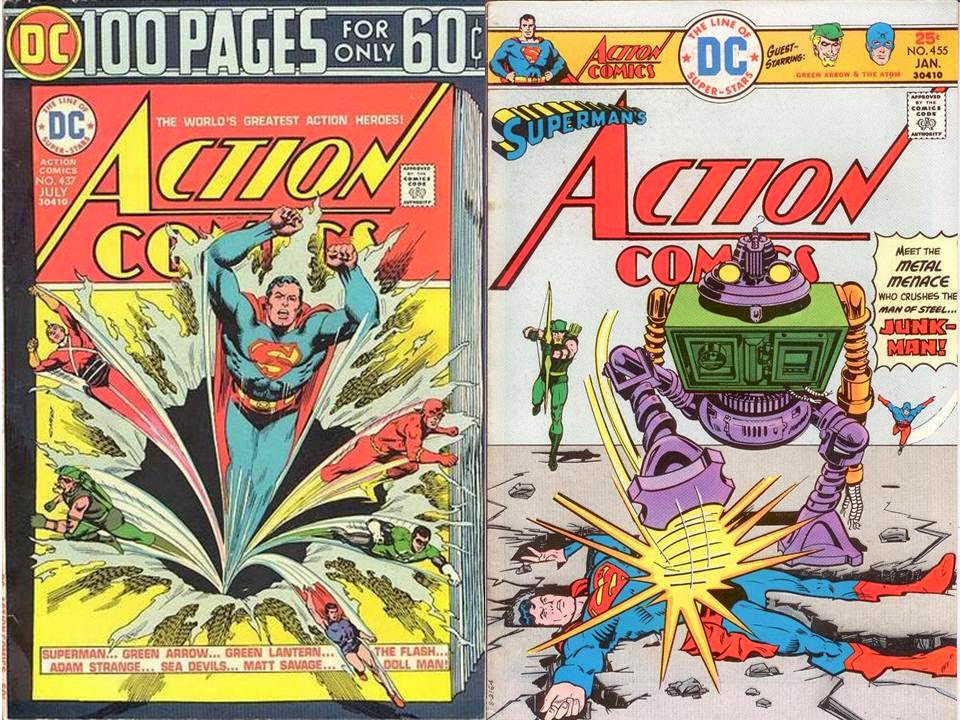 Hanging around with Superman must have led to Ollie getting a new home (along with his new paramour, Black Canary) in the back of Action Comics, starting with #421 (and alternating with the Atom and the Human Target for a time), and even working with Superman (as well as Flash and Green Lantern) in #437, and the whole Justice League and their individual foes in #443.  Ollie even handled some super-stuff, with Krypto in #440-441, a team-up with Superman and Atom in #455, and facing Luthor in #456-458 (both multi-issue arcs drawn by Mike Grell…a major artist in the life of Green Arrow!). 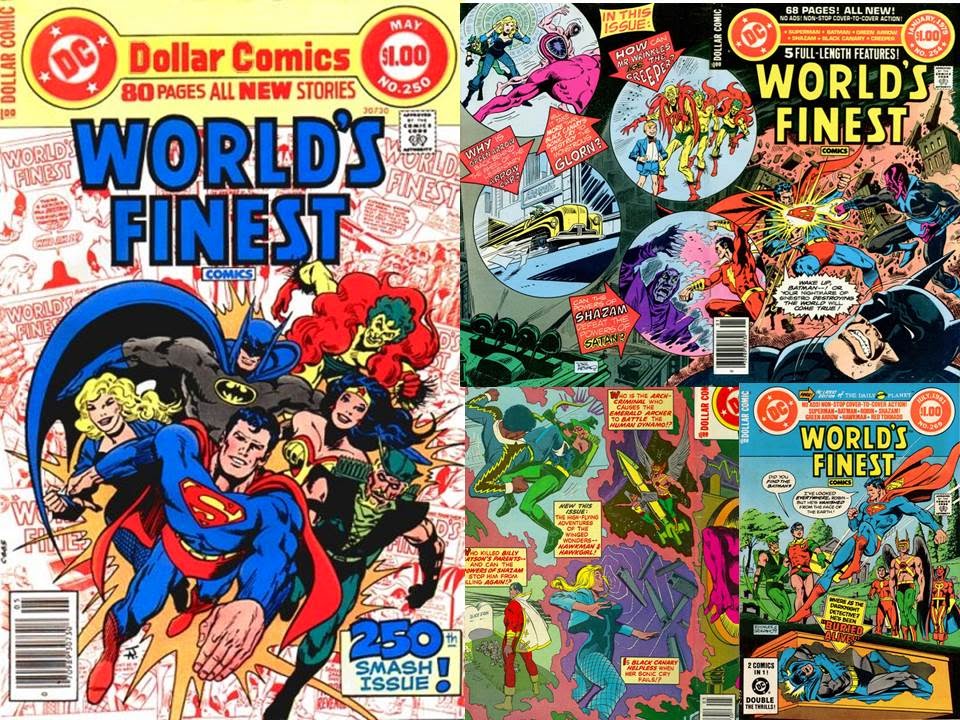 Green Arrow moved from his home in Action Comics over to World’s Finest Comics (from #244-284), only missing a few issues along the way…yet not usually meeting with Superman (except for World’s Finest Comics #250 from April-May, 1978), wherein Superman and Green Arrow, along with Batman, Black Canary and the Wonder Woman of World War II (this coming about due to Lynda Carter’s success on TV in the World War II adventures of Wonder Woman!) had to save the entire universe from ending….and the fact that there were issues after #250 shows they were successful!

At least Green Arrow was being social at this time!  That would change as time progressed…though Superman just kept expanding who he’d work with….and got more titles for himself as well! 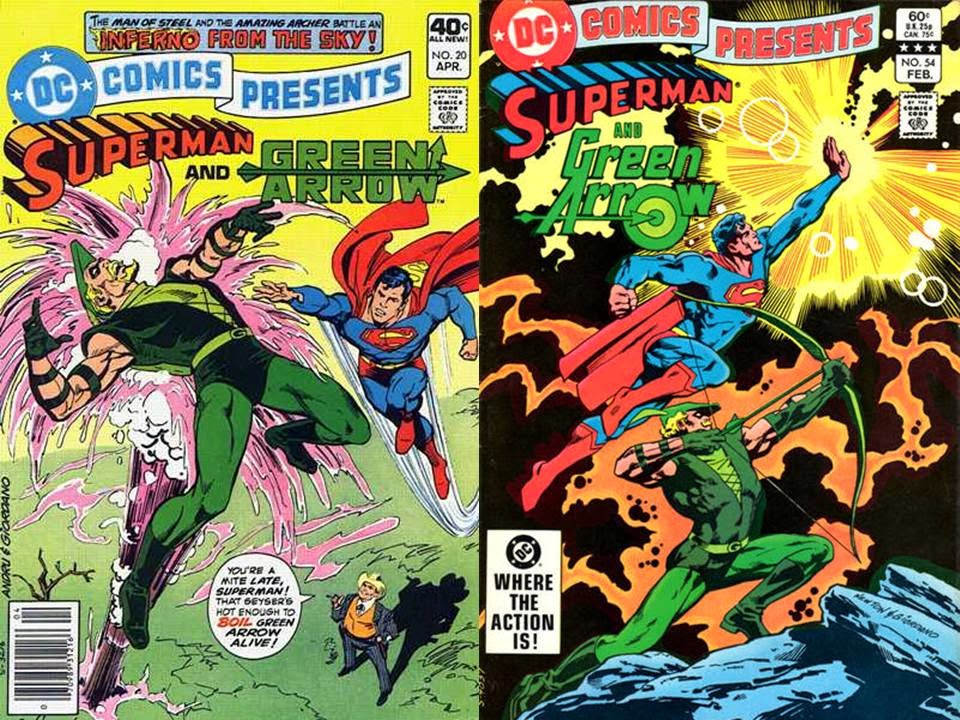 After Crisis Arrow and Steel 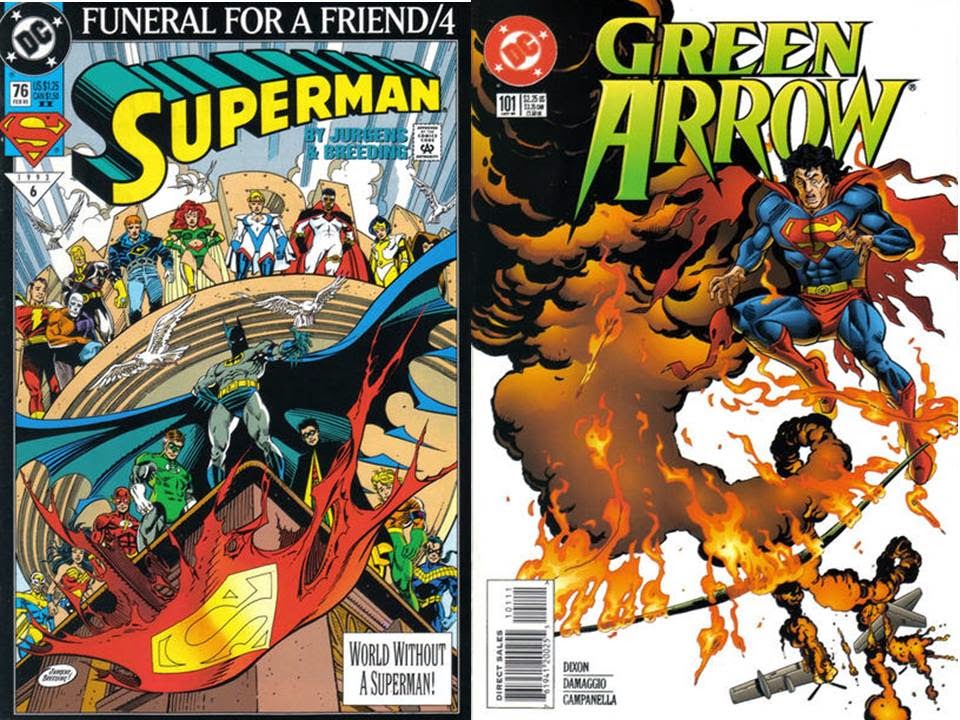 But, after the Crisis on Infinite Earths, Green Arrow was homeless again…at least until Mike Grell started Ollie on his adventure with Green Arrow: the Longbow Hunters in 1987 (and the regular series that followed…wherein Green Arrow stayed away from the more “super” elements of the DC Universe, including Superman!).

Still, both Ollie and Clark found time to stop by each other’s books when they died…both later to come back as well! 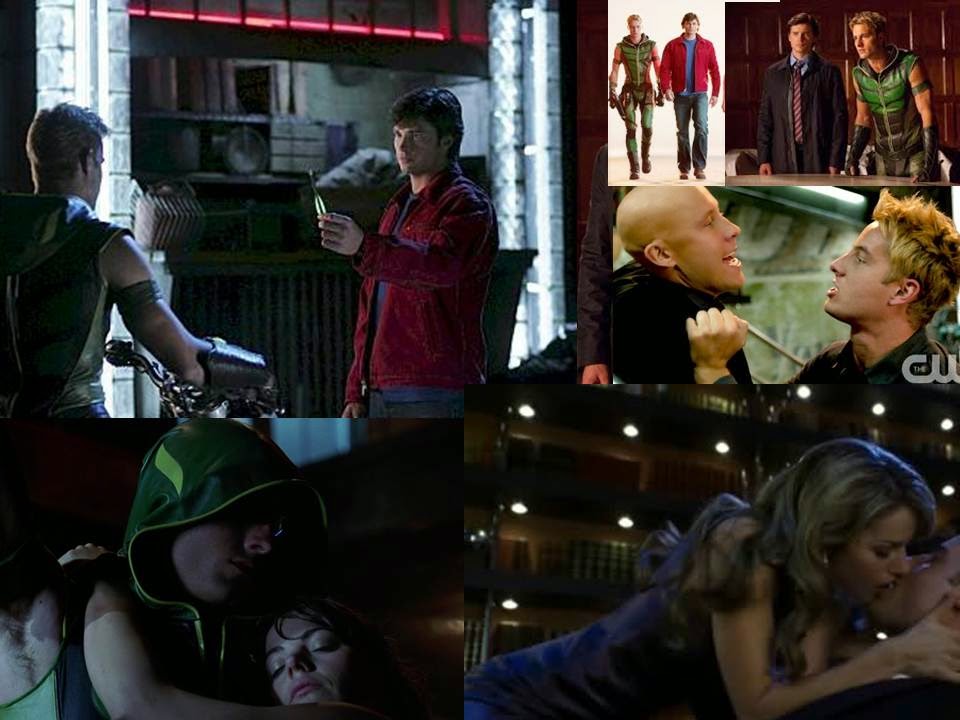 Ollie and Clark’s friendship even crossed genres, as Oliver Queen popped up on Clark Kent’s television show, Smallville, starting with season six, and their friendship continued through the end of the series with season ten, with Clark portrayed by Tom Welling and Ollie by Justin Hartley from 2006 to 2011.  Amazingly, the history related above showed up in a few of the episodes (battles with Lex Luthor, and an affair with Lois Lane for Ollie) as well as seeing one of Ollie’s foes (Meryln, though in Smallville, he was called Vordigan or the Dark Archer) and a few other things as well. 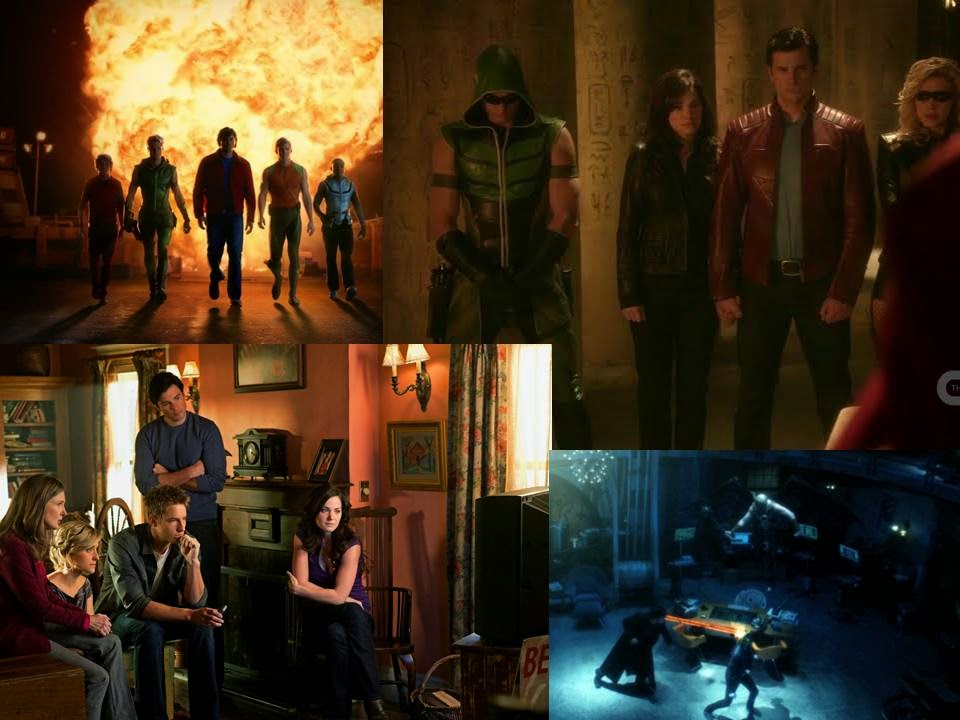 Still, this show does NOT relate to Arrow (as that has adapted the Mike Grell idea of less super heroics, and has Stephen Amell as Arrow…but one never knows what the future may hold, so who knows?  Maybe some future meeting of Arrow and the Man of Steel is what Superboy saw when he looked into his “time-viewer”…. 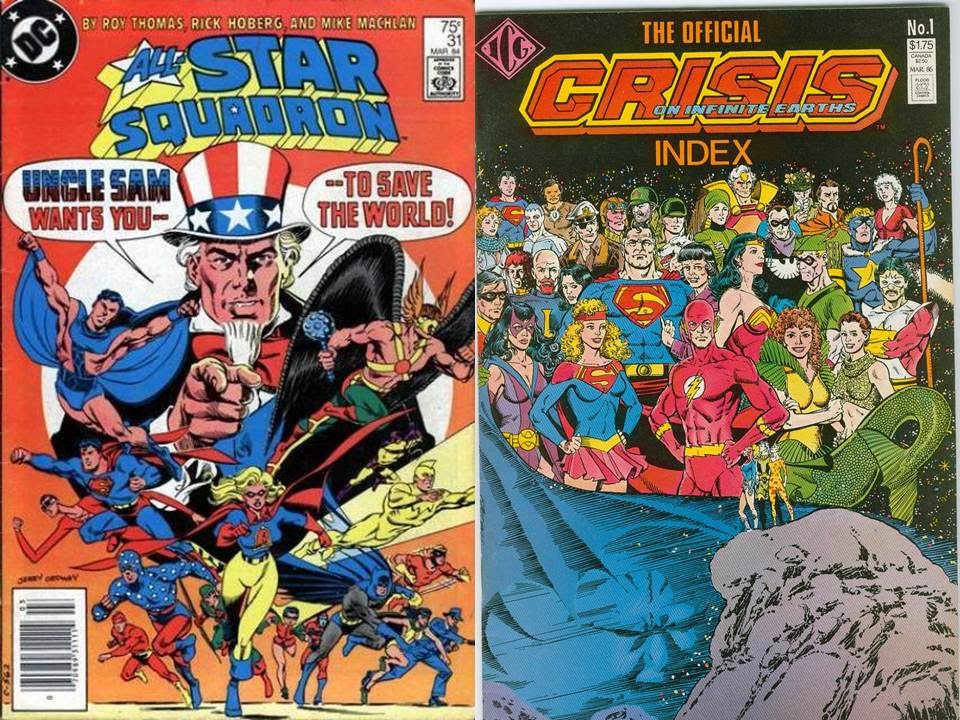 …or maybe it was back to Earth-2, where the original Green Arrow and Superman met for the first time, in All-Star Squadron #31 (March, 1984), though the story was set in the early 1940s…and the two crossed paths again in the Crisis on Infinite Earths!