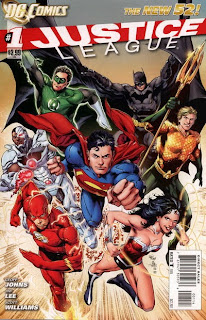 Yes, 2011's Justice League #1 teased us with a first meeting of the new DC Universe’s Superman and Batman, but, they have met before...

In other worlds, and other places (and of course, in other comics as well!).


So, let’s explore a few of those first meetings! 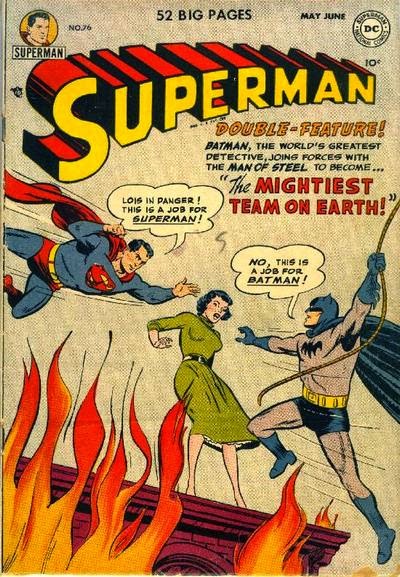 One of the longest lasting first encounters of Superman and Batman happened in Superman #76 (May-June 1952, by Edmond Hamilton and Curt Swan).  Superman and Batman (these being the Superman and Batman of Earth-1, and this story ends up being one of the earliest, definite Earth-1 stories…but it is also one of the first time Superman and Batman met in one of their own titles), travel as Clark Kent and Bruce Wayne on board a cruise ship.  The two heroes battled a diamond thief and vied for the affections of Lois Lane as well.  Within this tale, they learned each other’s identities for the first time as they changed from their normal clothes to their super-selves in a darkened cabin suddenly lit by fire…they were able to foil the criminal, but it was a third party who ended up with the damsel in distress at the end!  DC Comics had reprinted this story as one of the most influential in its history as a Millennium Edition, and it can rightfully take its place as one of the most important comics, because it was in this very issue that one character’s comic appearances were made valid in another’s individual series (as, at least at DC, characters didn’t crossover into other characters stories, except in team books, and while Fawcett Comics had a whole family of Marvels meeting each other and other Fawcett characters, Marvel Comics only existed as Timely Comics). 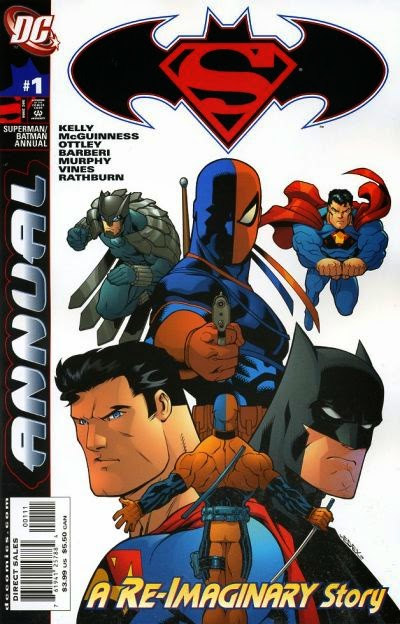 A more recent recovering of the first Superman/Batman meeting happened in Superman/Batman Annual #1 (December 2006, by writer Joe Kelly and a slew of artists including Ed McGuinness, Ryan Ottley, Sean Murphy and Carlo Barberi), and, for fun, threw in Alfred Pennyworth, Mr. Mxyzptlk, Deathstroke, the Terminator and the Superman/Batman of the Crime Syndicate of Amerika (Ultraman and Owlman) into the mix (as well as the Crime Syndicate’s Superwoman, and someone who couldn’t be Deadpool) along with Lois Lane (yet took the Boy Wonder out of the story, more recent histories of Batman have not had Robin as his partner in the early years, and this tale reflects that reality).  Not really sure that adding all of these other characters to the mix really improved the story, but it did make for an entertaining tale…more or less.  And it did take the first meeting of Superman and Batman back to the boat (even though it moved the meeting into the Bermuda Triangle), something that had not been followed previous changes to the tale, as the first meeting has been touched on other times as well. 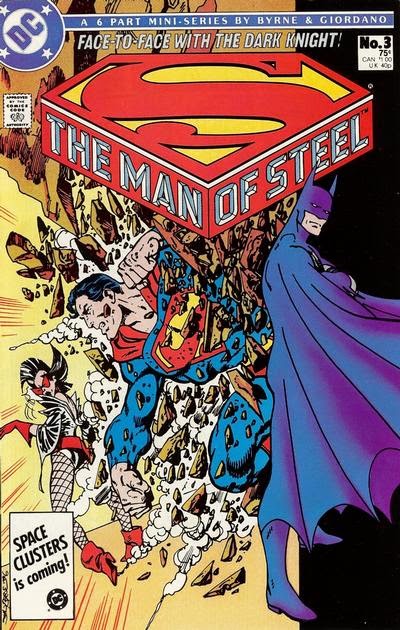 DC’s first major reboot of the Superman mythos happened with the Man of Steel mini-series by writer/artist John Byrne, and one of the major events to have happened in Man of Steel #3 (November 1986), with that DC Universe’s first meeting of the Man of Steel and the Dark Knight.  This first meeting was inspired by a new villain, a lady by the name of Magpie, who had a fascination with shiny diamonds, and Batman having to deal with the caped Kryptonian to stop her.  This established the idea of Batman being ready for anything, as he had prepared himself for a confrontation with the Metropolis Marvel, and had outwit him at the time.  Superman and Batman did NOT learn each others identities at this time, instead having that shared secret between the two unfold over time (and, it ended up taking place in the current DC Comics of the time, which, considering, that, as co-members of the Justice League, they may have revealed their identities to each other before, but Superman’s role in the early Justice League, post-Crisis on Infinite Earths but pre-Infinite Crisis  had been reduced, and this story implied very heavily that Superman and Batman were not best of friends after this meeting…and, this event was soon followed by the gathering of the original Justice League of America in Superman: The Man of Steel Annual #4 (1995), with Superman meeting all the new young heroes of the time). 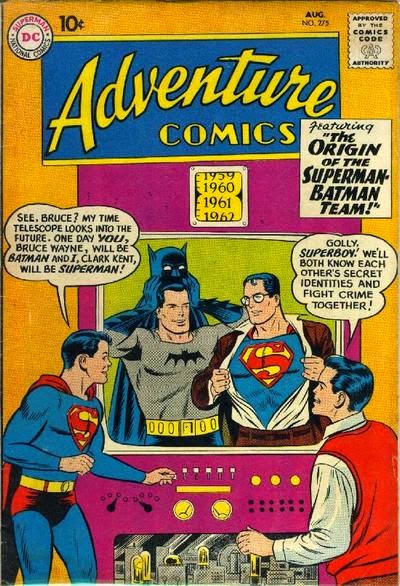 One tends to forget that even their heroes were young once, but (at least on Earth-1), before Superman was SuperMAN, he was SuperBOY.  Superboy and a young Bruce Wayne (taking on the identity of the Flying Fox) first met in Adventure Comics #275 (August 1960, by Jerry Coleman and George Papp).  In this story, young Bruce Wayne moves to Smallville, learns Superboy’s secret identity but does not reveal it to Lana Lang, and Superboy erases the knowledge of his identity from young Bruce’s mind…or so he thinks.

But, young Bruce Wayne met Superboy once before (as detailed in World’s Finest Comics #84, September-October 1956), but Superboy didn’t know it was Bruce Wayne who prevented crook Thad Linnis (whom young Bruce was working with) from learning Superboy was really Clark Kent!  But, Bruce does know and keeps the secret for years! 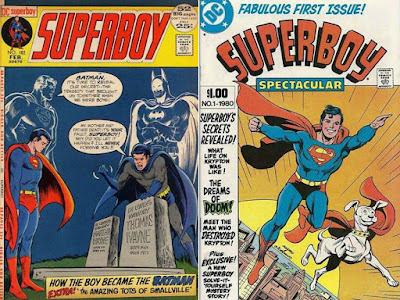 Superboy met a young Bruce Wayne a few times later in Earth-1 continuity (in Superboy #182 from February 1972, and in the Superboy Spectacular #1 of 1980), but those meetings were erased from Superboy’s memory (not as an evil plot, but by Superboy himself…

...preventing him from having too much knowledge of the future, and thus accidentally making it not happen). 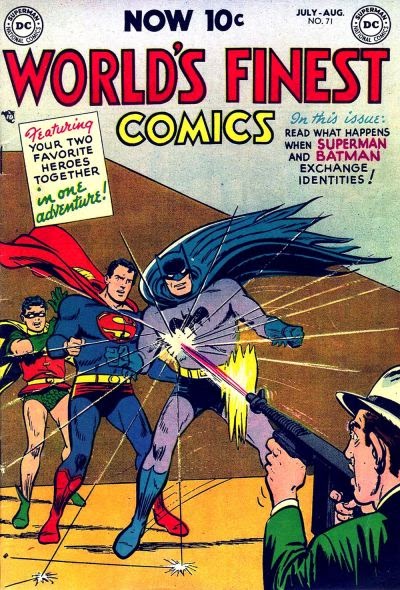 World’s Finest Comics was the home of Superman/Batman team-ups from #71 to #323 (issues #2-70, while having Superman and Batman in action together on the cover, did not feature any stories with them together on the inside!).  Issue #71 (July-August 1954) simply had the duo working together, as natural as can be (and, it was really a trio, as Robin was frequently involved in these pairings as well!

Working with Superman had quite the effect on Dick Grayson, as he had taken his name for his future super-self, Nightwing, from Superman….as Superman had become Nightwing, a non-powered crimefighter, when he fought crime in the city of Kandor with Jimmy Olsen being the Kandorian Nightwing’s partner as Flamebird). 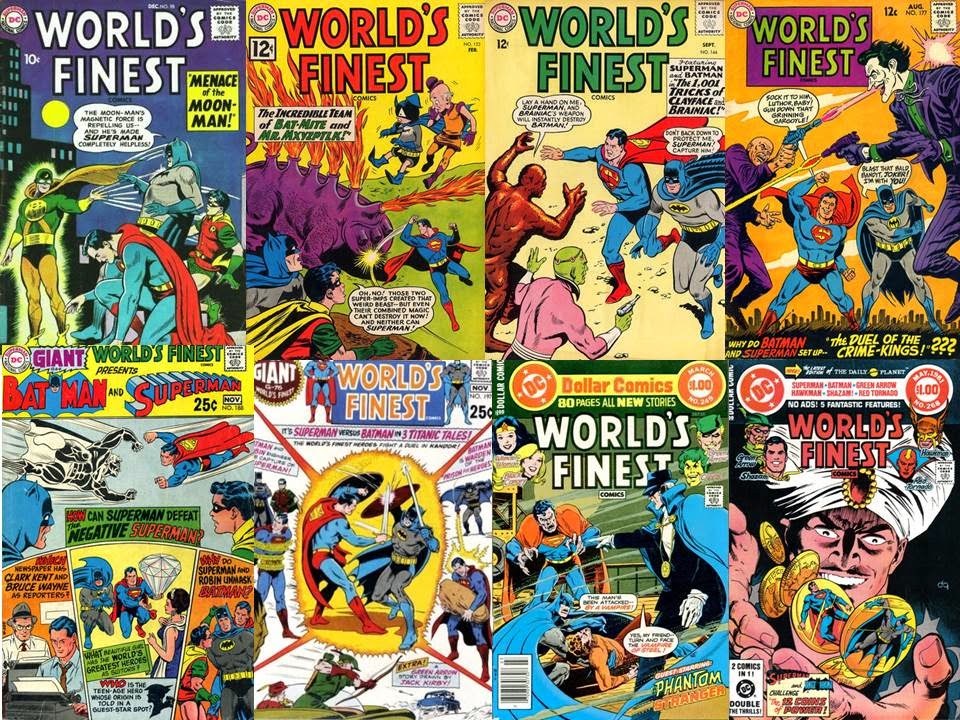 Superman and Batman even faced foes that only the two of them could handle, such as the Moon Man, the Composite Superman, Dr. Zodiac, the Weapons Master, the Pantheon and Null and Void. 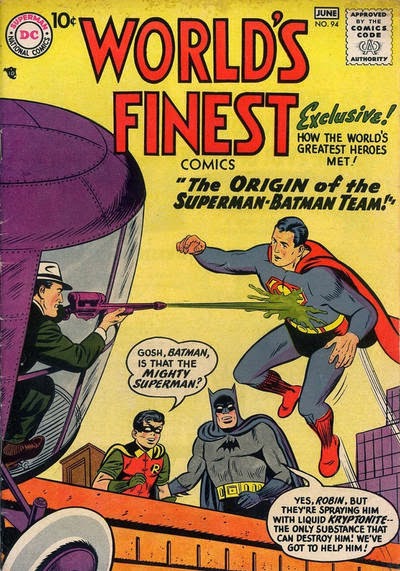 It is in World’s Finest Comics #94 (May-June 1958 by Edmond Hamilton and Dick Sprang) that we see “The Origin of the Superman-Batman Team!”.


To save Superman from a kryptonite trap, Batman and Robin work against the Man of Steel, yet on his side, by keeping him away from thugs who have the one substance that could kill him...

...nice to see heroes caring about each others welfare. This ends up being a reoccurring theme in Superman/Batman meetings for many a year, and quite a lot of the history of Superman/Batman gatherings was covered in World’s Finest Comics #271 (September 1981, by Roy Thomas and Rich Buckler), where more than a few of the Earth-1 meetings were covered in one story (and the radio meeting of Superman and Batman was presented as the first meeting of the original Superman and Batman of Earth-2…but, not unlike many of the footnotes in this story – which were wrong -the radio play first meeting of the caped Kryptonian and Metropolis Marvel just was not a really good fit for the comics, but at least it was a novel attempt to explain some of the contradictions of the first meetings of DC’s two major stars). 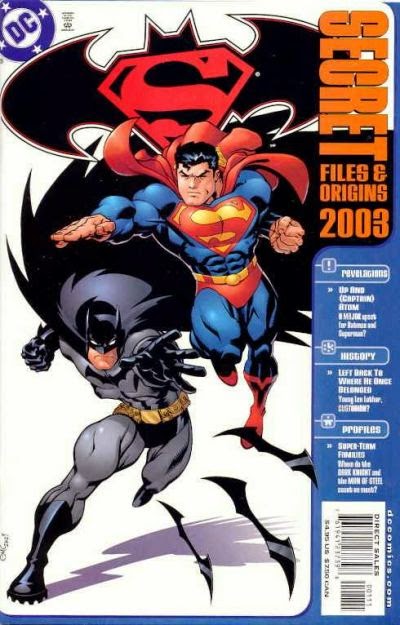 The more recent Superman/Batman series (that lasted 87 issues and 5 Annuals), really didn’t deal with first meetings between Superman and Batman (other than the first annual), but a recent issue of Superman (#710, June 2011) did once have young Clark Kent and Bruce Wayne meet up and face Vandal Savage before establishing their super-identities, and an even younger Bruce Wayne saw a younger Clark Kent playing in a field in Smallville as he was driven through the town in a story in the Superman/Batman Secret Files 2003 by Jeph Loebs and Tim Sale.

In the cartoons, Superman and Batman were just partners (along with Wonder Woman, Aquaman and Robin) in the Super Friends without any first meetings ever being presented.  But, in the Superman: Animated Series, on October 4, 1997, is when those characters first met as Batman came to Metropolis to stop the Joker from selling Luthor a kryptonite statue in the episode, “World’s Finest”, written by Alan Burnett and Paul Dini. 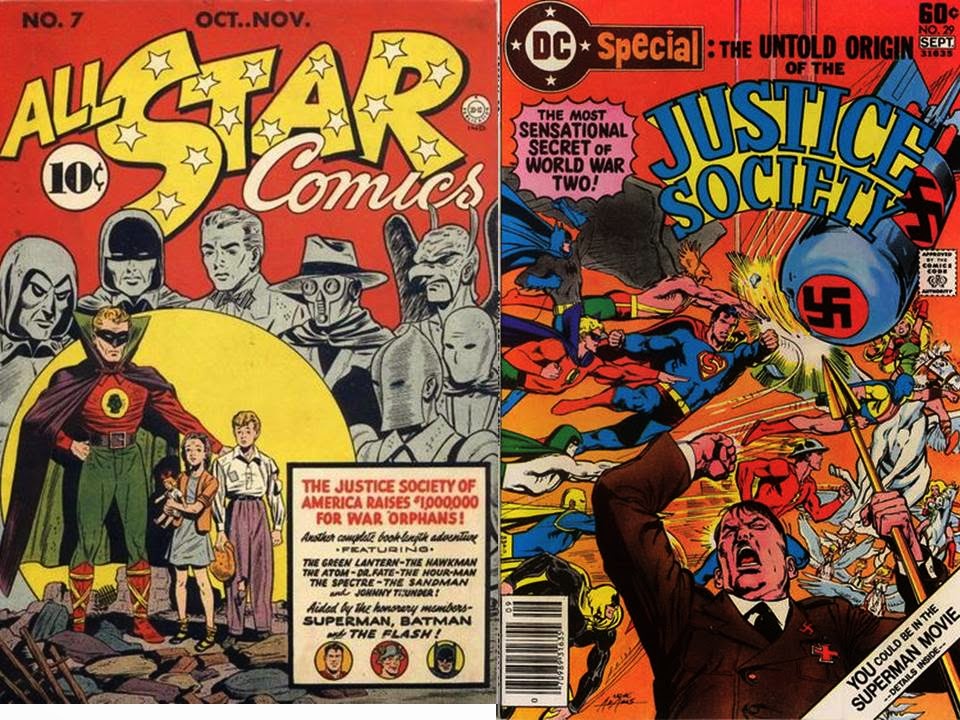 But, if you want to know the first comic Superman and Batman were in together…it was All-Star Comics #7 (October-November 1941 by Gardner Fox and a team of artists including Everett Hibbard, Martin Nodell, Bernard Baily, Ben Flinton, Stanley Asch, Sheldon Moldoff and Cliff Young, both as honorary JSA members, and the first meeting of the originals – read that more as Earth-2 versions –  happened in a continuity implant in DC Special #29, from August-September 1977, with the origin of the Justice Society of America by Paul Levitz and Joe Staton). 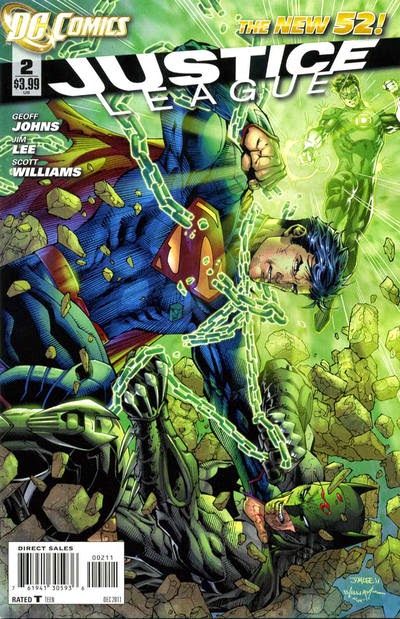 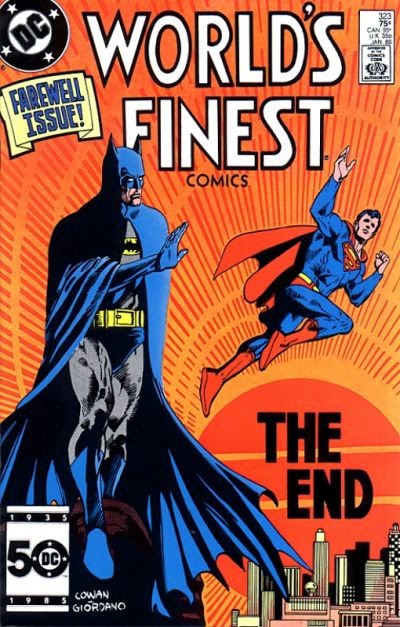