Batman Meets Himself In Brave and the Bold 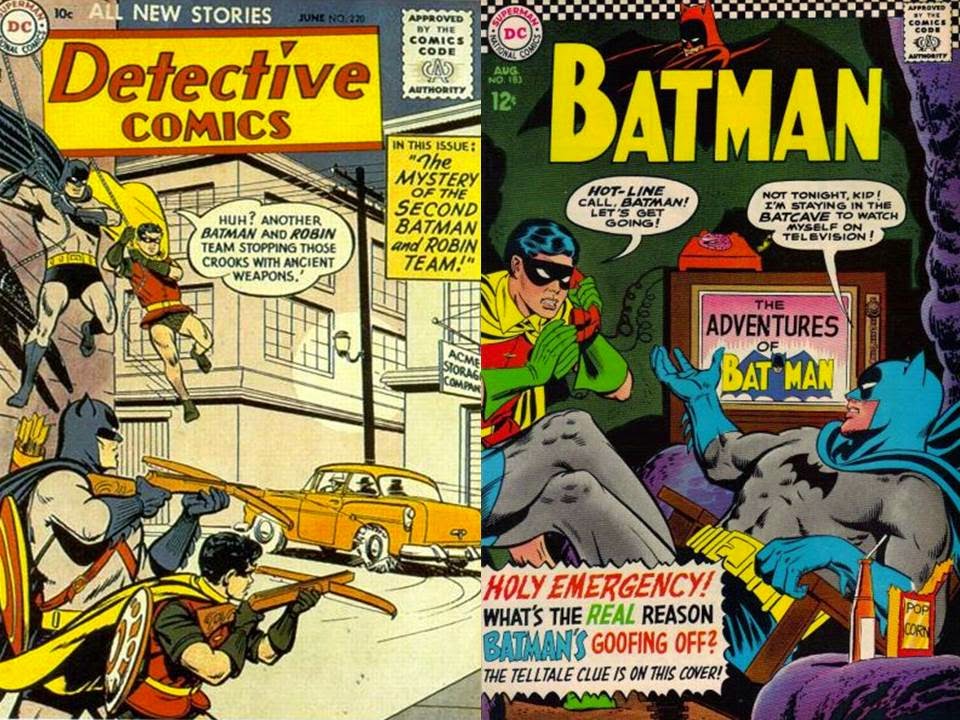 After over 75 years in the comic industry, Batman has changed a little bit over the years since Detective Comics #27 (May, 1939)...

...and here's a few stories that help show those changes as the Silver Age (or Earth-1) Batman meets a few Golden Age (or Earth-2) members of the Batman family! 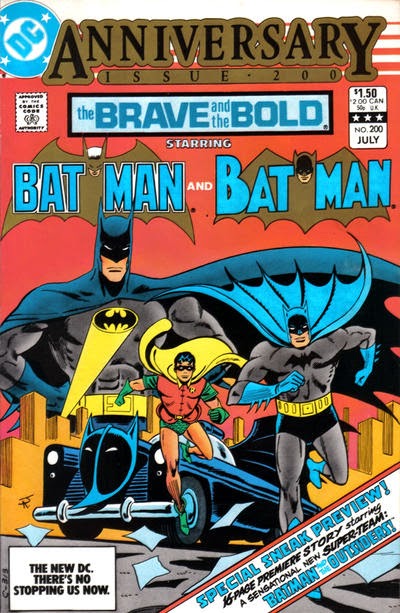 In Brave and the Bold #200 (July, 1983), writer Mike W. Barr, with artist Dave Gibbons (and all under a stunning cover by premiere Batman artist, Jim Aparo), tells a tale late in the original Batman's career, where he faced Brimstone (a villain with a devilish theme, good enough to make it into 1950s comics, or even the 1966 Batman TV show)... 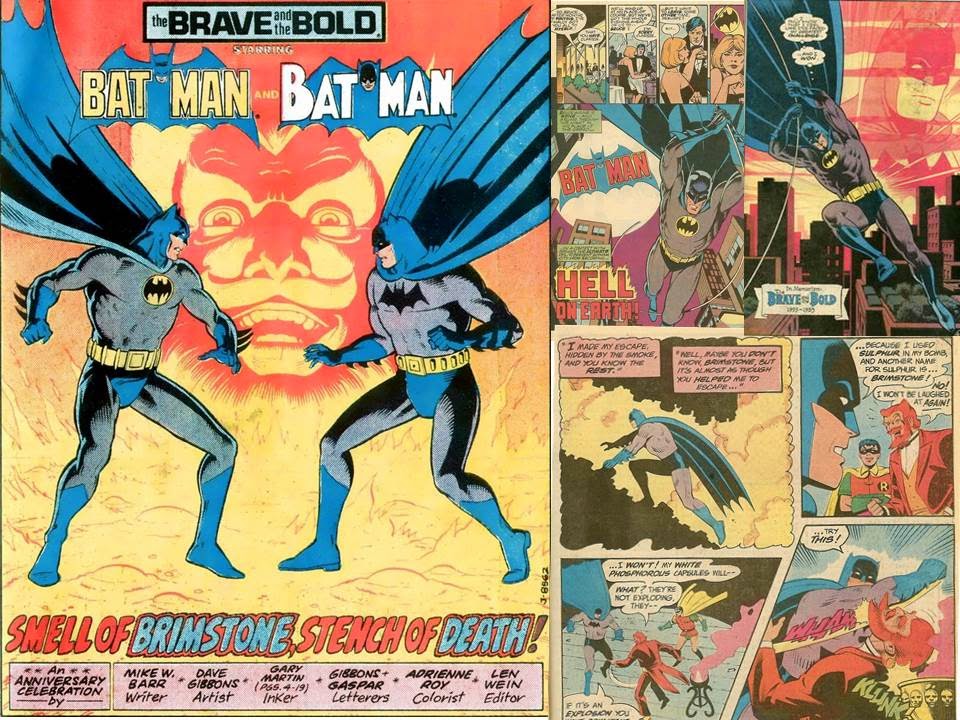 A few decades later, and Brimstone wanted to revenge himself on the original Batman, but is unable to due to the passing of Earth-2's Batman, so Brimstone takes over the body of his Earth-1 counterpart and menaces the (at the time) current version of Batman.

A fun little story even if the two Batmen don't meet, and the issue contains the first appearance of Batman and the Outsiders as well!

One of the biggest differences at the time (besides the yellow oval) was that 1950s Batman still had Robin as a partner.... 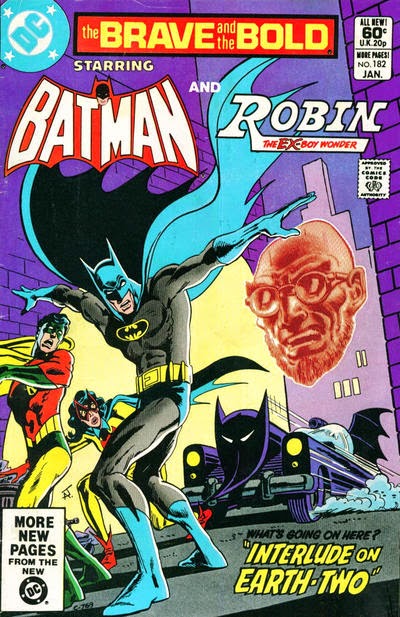 Now with Brave and the Bold #182 (January, 1982), the modern Batman was given an "Interlude On Earth-Two" thanks to writer Alan Brennert and artist Jim Aparo, where he met with the original Batman's now grown-up partner of Robin!

The Batman of Earth-1 also met two people he considered to be ghosts, Batwoman and Hugo Strange (both who had just passed on Earth-1, but were still alive on Earth-2).  Seems the original Batman's foes were all ready to kill Batman, and not that happy that they couldn't... 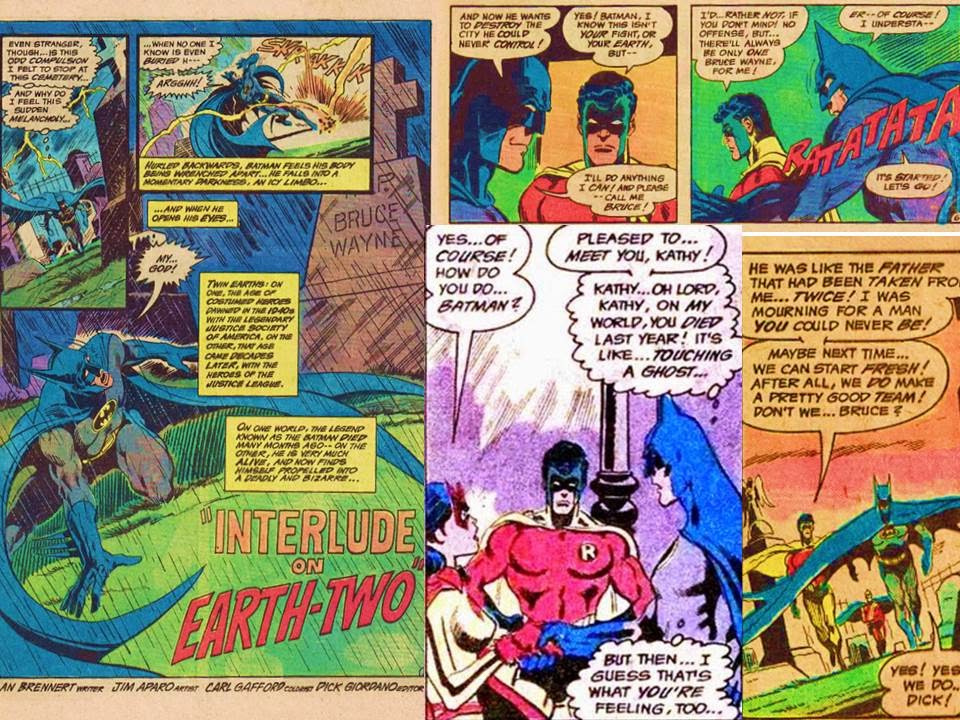 This story established that some of Batman's later 1950s stories must also have happened in the lives of both Batmen, and it was a touching tale of how to deal with loss.

This story was reprinted in the Secrets of the Batcave tradepaperback as well...

...and more history of the original Robin has been covered here too! 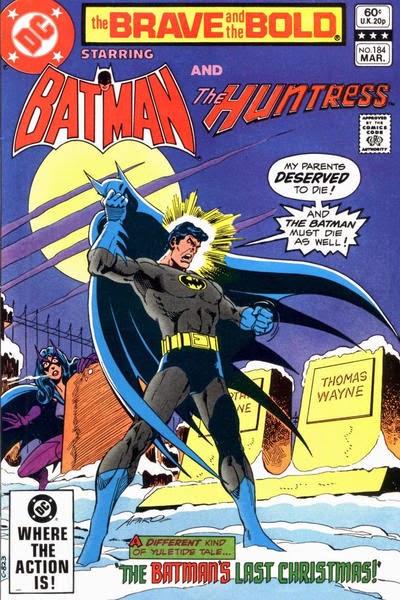 Earth-2 must have been on Mike W. Barr's mind as well, as he gave us a Christmas take on cross-Earth Bat-family meetings (along with artist Jim Aparo) with Brave and the Bold #184 (March, 1982) and "The Batman's Last Christmas".

Batman discovers that his father, Thomas Wayne, may have been involved in the Gotham crime scene...as a criminal!

Luckily for the Earth-1 Batman, his "niece" from Earth-2, the daughter of the original Batman, Helena Wayne, a.k.a. Huntress, came over for a visit..

...and the two of them worked it out, as well as dealing with the loneliness the holidays can bring! 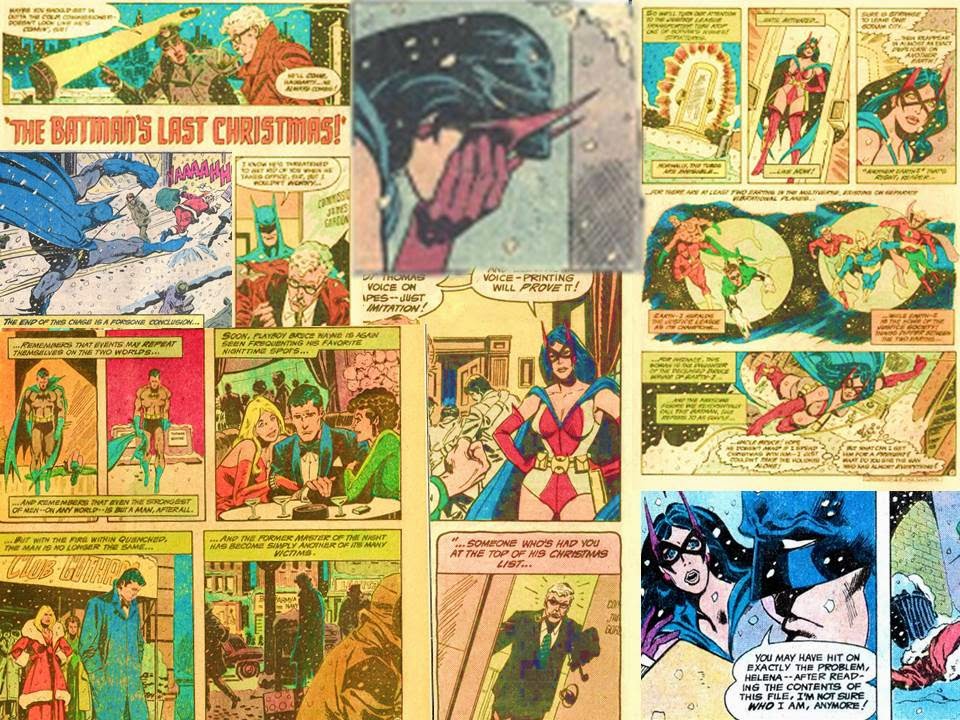 This story made it into the Greatest Batman Stories Ever Told Volume 2 tradepaperback of 2007, and the Huntress had the majority of her earliest solo appearances including her first appearance and origin in DC Super-Stars #17 (November-December, 1977, by Paul Levitz, Joe Staton and Bob Layton) gathered in the Huntress: Darknight Daughter tradepaperback of that year as well (and this was the Huntress that was the inspiration for the Huntress of the Birds of Prey TV series as well!). 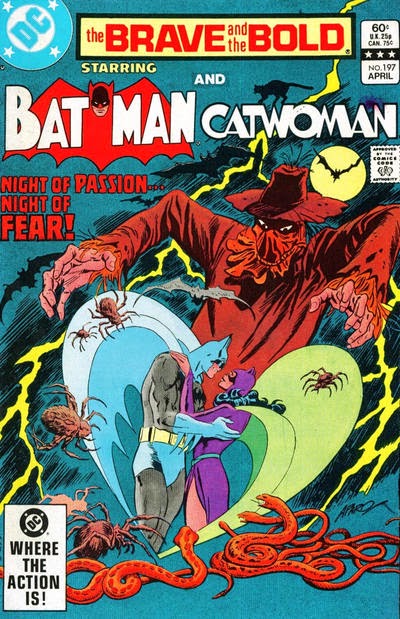 With all of this, you might wonder who the Huntress' mother was, and she was a foe of the original Batman, Catwoman!

Her part in Huntress' origin was covered pretty well in Huntress' origin in DC Super-Stars #17, but there was still a little more of the tale to be told, and that was told in Brave and the Bold #197 (April, 1983), by Alan Brennert and Joe Staton (and cover by Jim Aparo).

This issue also dealt with a lonely Batman, but this time it was the original, Golden Age, Earth-2 Batman, and his fear was made that much worse by the master of fear, the Scarecrow! 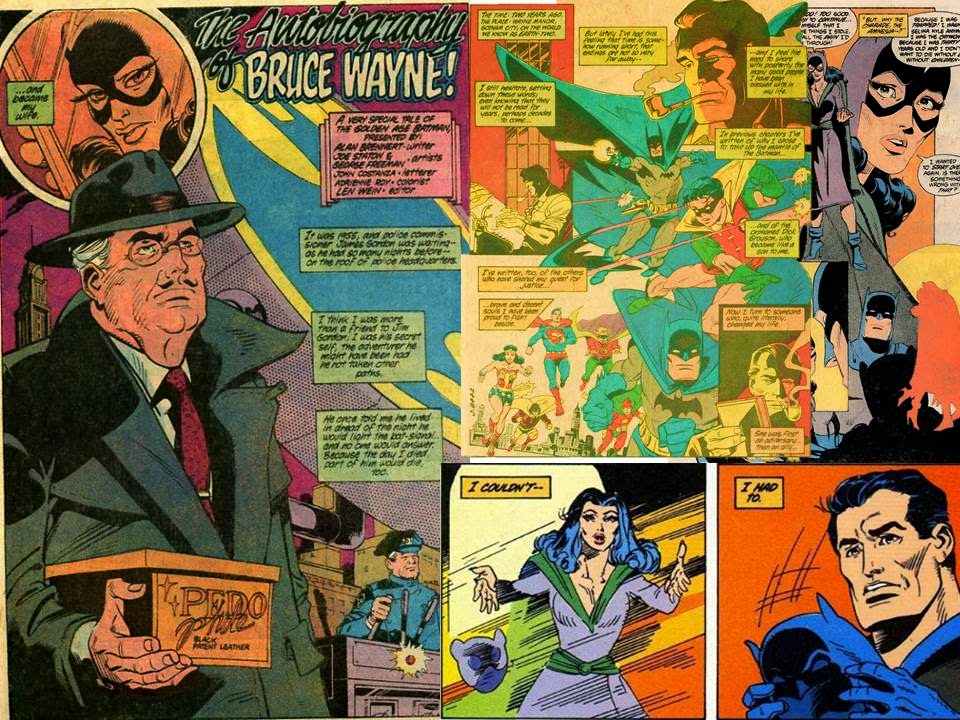 This could be considered a "zero issue" for the Huntress, as it detailed how Bruce Wayne and Selina Kyle were finally able to reveal their feelings for each other, and put the masks behind.

A truly touching tale, reprinted in the original Greatest Batman Stories Ever Told hardcover of 1988 and the tradepaperback of 1989.

All of this shows how much Alan Brennert, Mike W. Barr, Jim Aparo and Joe Staton have given to the legend of Gotham and it's hero, the Batman...and their work is appreciated!  It also shows that Brave and the Bold helped Batman's mythology as well, expanding and exploring the Batman family and finding the man behind the mask!