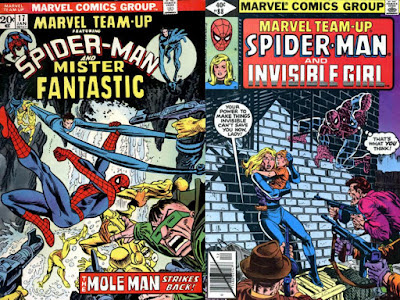 With the return of Reed and Sue Richards this week as a part of the Fantastic Four, now's a good enough time to see how Mr. Fantastic and the Invisible Girl (as she was at the time, only more recently being the Invisible Woman) met up with New York's favorite wall-crawler, the amazing and spectacular Spider-Man! 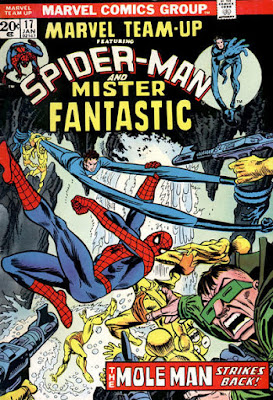 First up is Mr. Fantastic, who worked solo with Spider-Man first in Marvel Team-Up #17 (January, 1974) with "Chaos At The Earth's Core" by Len Wein, Gil Kane and "Everybody" (inkers Sal Trapani, Frank Giacoia and Mike Esposito).

Due to events of the previous issue, Spidey headed to the Baxter Building for help, finding a lonely Mr. Fantastic there (the team had recently split up in the FF's own title).  Spidey relays to Reed his problem....that he was fighting a villain called the Basilisk, and the original Captain Marvel got trapped within the Omega-Stone and disappeared.  Spidey hoped Reed would help him find Cap and the stone, which he does, locating them in the center of the Earth.  The two take a Fantasti-Car there, where they are captured by Mole Man's Moloids.  Taken to their leader, Mole Man explains his plan to use the power of the Omega Stone to crack the Earth....but the heroes break free, fight Mole Man, and then the Basilisk as well (who followed the heroes looking for the stone).  Within the stone, Captain Marvel finally touches his nega-bands, which switches his body with that of Rick Jones, and without Cap's Kree energies powering it, the stone shrinks in size and frees Rick.  The Mole Man/Basilisk battle unleashes a lava flow, one taking the Basilisk away with the stone, the other trapping Mole Man, and Spidey, Reed and Rick leave in the Fantasti-Car, with Rick explaining his situation outside the mine shaft, turning into Captain Marvel, who flies away. 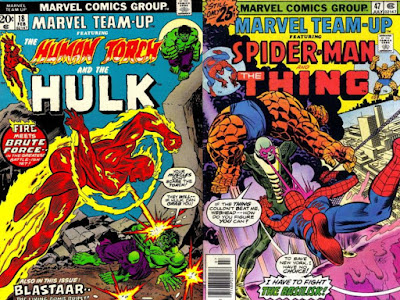 The Human Torch appears in the next issue (meeting the Hulk, one of Johnny's many non-Spider-Man team-ups), while Sue and the Thing's time while the Fantastic Four are split is covered in Fantastic Four #142 (and some THING tells me that the Basilisk will return sometime later as well...). 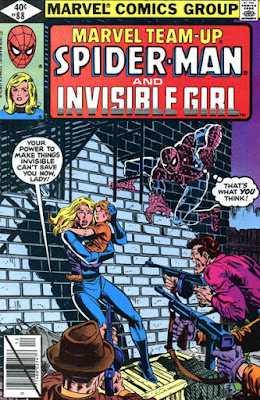 While the Thing and Human Torch have a few team-ups with Spidey, finally the Invisible Girl gets a solo shot in Marvel Team-Up #88 (December, 1979) when "A Child Is Waiting" by Chris Claremont, Sal Buscema and Eduardo Barreto.

Covering a society luncheon as photographer Peter Parker, Spidey sees Hank "Yellowjacket" Pym, Janet "Wasp" Van Dyne and Sue Richards, the Invisible Girl.  Sue gets distracted by a phone call, which Peter overhears, finding out the call was from Alicia Masters (the Thing's girlfriend), and that a group of thugs had kidnapped Sue's son, Franklin, from Alicia.  Sue heads to Alicia's, where the thugs call, informing Sue how to steal from the crime family Maggia, so that she can pay to get her son back.  Spidey follows, coming up with a plan to thwart the kidnappers.

The Invisible Girl still takes the money from the Maggia, then follows the kidnappers instructions to go to Yankee Stadium during a double header, where she keeps Spider-Man invisibly next to her, so that he can trail the pick-up man.  He does this, and follows the man out of the stadium, changing to Peter Parker as Sue can only keep him invisible for so long.  Peter follows him to near their headquarters (with Sue following him via one of his trackers), changing back to Spider-Man after he thinks he lost him (but Sue saw where he went).  The two work together to save Franklin from the kidnappers, then the Maggia thugs who came to retrieve their money, with Spidey being able to turn them all over to the police as Sue and Franklin disappear. 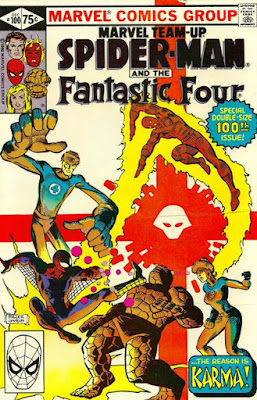 Next up, Spidey works with the whole Fantastic Four and then some in Marvel Team-Up #100 (December, 1980) by Chris Claremont, Frank Miller and Bob Wiacek, "And Introducing - Karma! She Possess People".

This tale introduces Karma, Vietnamese mutant Xi'an Coy Manh, who uses her power to possess people first on Spider-Man, to try to free her brothers and sister from captivity....then, after finding out he was not such a menace as he battles the Fantastic Four, regrets her action, but ends up helping Spider-Man against her brother, Tran, who has the same powers, and uses the Fantastic Four against them.  Karma eventually defeats her brother, and frees her other siblings, with the Fantastic Four turning them over to Professor X of the X-Men, so he can help the young mutant.

This issue also has a second story, wherein Black Panther meets Storm (both now, and in a flashback to when they were young in a story by Chris Claremont, John Byrne and Bob McLeod. 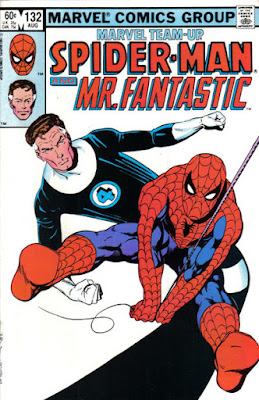 Captain America foe, Everyman, attacked his uncle, Reed Richards, in the Baxter Building, having had his powers restored in the mental hospital he was staying in by the doctor who was treating him.  Everyman steals Mr. Fantastic's intellect.  Spider-Man shows up after Everyman starts stealing the lifeforce of people around the Baxter Building, going inside to help Reed.  The two battle Everyman, with Reed eventually regaining his intellect as they make Everyman realize he was killing everyone in the crowd to battle them.  Everyman escapes, and Reed promises to find who had been influencing his nephew, Larry Ekler. 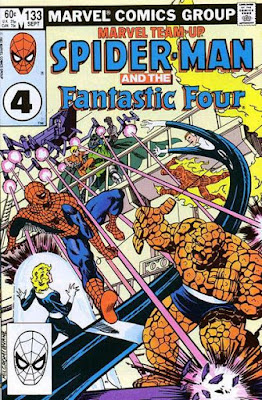 This team-up continues in Marvel Team-Up #133 (September, 1983) with "The World According To...Faustus!" by J. M. DeMatteis, Sal Buscema and Mike Esposito.

Mr. Fantastic wants to find whoever was hurting Larry "Everyman" Ekler, but declines Spider-Man's help.  Spidey leaves, promising Reed that he'd gladly be there if he needs him.  Reed tracks down where Larry was being treated, and takes the Fantasti-Car to the institute, which is being run by Dr. Faustus (a foe of Captain America, who is working for the Secret Empire, and relating to his mother his plan to defeat the Fantastic Four....but is a little upset that only Mr. Fantastic has come).  Reed uses his stretching abilities to save Spider-Man, who seemed to come to help, attaching himself to the Fantasti-Car, but falling as they arrived.  Reed is also suffering from headaches, which he thinks is a side effect of Everyman's attack.  The heroes encounter the Human Torch, who says he just escaped the institute, and that the doctor his holding Ben, Sue and Franklin as well.  This puts Reed in a panic, when he and Spidey go inside, and find the Thing shackled, who says Sue and Franklin are further in.  Reed leaves Spidey to care for Johnny and Ben, and goes to look for his family. 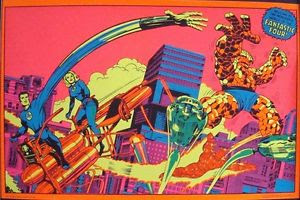 The other three quickly join, no matter their depleted condition, and find the Invisible Girl in shock, where Reed tries to find out where Franklin is.  Then, Doctor Doom appears with Franklin, mocking Mr. Fantastic, and taking off his mask...to reveal he is Reed Richards!  The villain then has the rest of the FF killed, traumatizing Reed, who goes to console Franklin, who pulls a gun and shoots his father, who falls unconscious!

How...bizarre.  Except that this is when Dr. Faustus reveals himself, as he tells Reed and his mom of his plan, to introduce these androids to confuse Mr. Fantastic, and, with this "Spider-Man" being one of Faustus' henchmen (who was really on the grounds, not on the Fantasti-Car).  Dr. Faustus touts his victory to his mom, but Mr. Fantastic was only feigning unconsciousness, as he had figured out the plan, and defeats Faustus, looking up to where he was talking too, but....finding no one there (as Faustus had likely only imagined his mom there, showing the doctor had a need to heal himself). 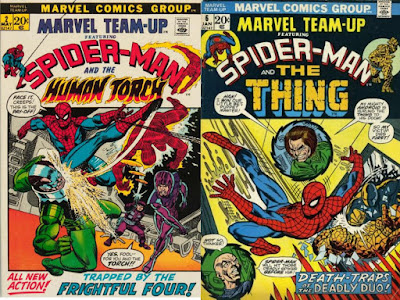 Of course, Spider-Man also had individual team-ups with the Human Torch and the Thing, but "Four" now, those fantastic tales are something we can look back at in the future.
Posted by Dave's Not Here Comic Blog at 4:44 AM