Spider-Man Teams With The X-Men 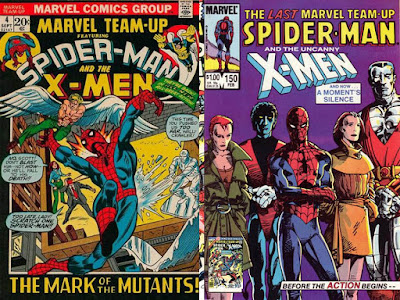 Spider-Man was certainly amazing on his own, but...

...what happened when he worked with those uncanny mutants....

Here are the three tales of Marvel Team-Up where Spider-Man worked with the whole X-Men team. 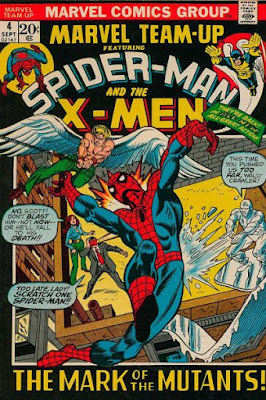 First up is Marvel Team-Up #4 (September, 1972), with Spider-Man "And Then -- The X-Men!", in a story by Gerry Conway, penciled by Gil Kane, and inks by Steve Mitchell for most of the story, and Frank Giacoia and John Romita for the flashbacks (and Gil and Frank on the cover), with the X-Men replacing the Human Torch (who had teamed up with Spidey for the first three issues).

This was mostly the original team of X-Men (Professor X, Cyclops, Marvel Girl, Iceman and Angel), with the Beast popping up to explain that he was busy (because at the time, he was the only one with a title....the X-Men were homeless, and the Beast had solo adventures in Amazing Adventures!).

Continuing the story from the previous issue (with a Human Torch team-up), Spidey deals with a sickness and the living vampire of Morbius, who kidnaps a friend of Charles Xavier's...which leads Spider-Man into his team up with the band of merry mutants, who help the wall-crawler in civilian clothes, not their usual costumes (or even training uniforms, as seen in the Angel inset on the cover). 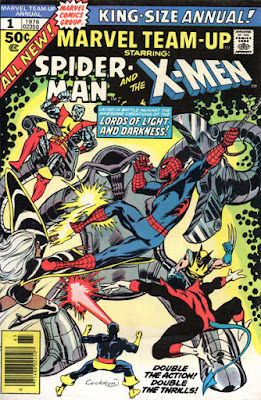 Marvel Team-Up Annual #1 (1976) with a cover by Dave Cockrum, and plot by Chris Claremont, Bonnie Wilford and script by Bill Mantlo, and art by Sal Buscema and Mike Esposito, with Spider-Man meeting with the second incarnation of the X-Men to face "The Lords Of Light And Darkness!".

This was a chance for the X-Men to shine outside of their own title, and they did!  The X-Men (consisting of Professor X, Cyclops, Banshee, Wolverine, Colossus, Storm, Nightcrawler and the Phoenix) end up facing off against the Lords of Light and Darkness (who were a group of scientists transformed by a lab accident in Nevada.  Peter Parker was on a plane bound for Arizona and a conference on mutation (which also had Professor Charles Xavier and his students aboard), when that plane flew through a cloud and was attacked by the robots that use to guard the Nevada facility (causing the X-Men to go into action, and Peter, recognizing Cyclops, to change into Spider-Man).  The heroes confront the robot, and head to a source of radiation in the desert (getting an "anti-radiation spray" to keep them safe).  Once they end up at the Nest (the home of the mutated scientists), the heroes are taken down, and the Phoenix is isolated (as she was the one they were looking for).  The scientists, now calling themselves the Lords of Light and Darkness (with individual names taken from Hindu Gods), want to continue evolving and need to release more radiation to help that process (and want Phoenix to join them, as her mutant powers make her the only one on Earth that would survive the process).  Spidey convinces them to go into space to evolve, and not destroy the Earth (or take Phoenix along), and the X-Men help them get there.  Professor X helps wipe the minds of the other plane passengers to keep Spidey's identity a secret, and the team and Spidey then show up briefly in Marvel Team-Up #53 (January, 1977), the start of a two-issue team-up of Spider-Man and the Hulk. 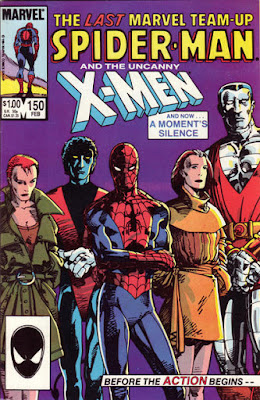 Spidey's last X-Men team-up was in the last issue of MTU, Marvel Team-Up #150 (February, 1985) under a cover by Barry Windsor-Smith, and the story "Tis Better To Give!" written by Louise Simonson, penciled by Greg LaRocque and inked by Mike Esposito.

This time around, Spidey and the merry mutants of Rachel Summers, Nightcrawler, Rogue and Colossus, with Peter Parker dealing with his usual financial woes, and the X-Men dealing with the Juggernaut (who has just given the Ruby of Cyttorak to his friend, Black Tom Cassidy, which gave Juggernaut his power, and it has the same effect on Tom).  The two villains are battling in New York, with Spider-Man and the X-Men fighting to stop them (with Rogue at times absorbing powers from the villains, and turning on the heroes). Pictures of the fight don't help Peter's money troubles, but a lucky accident does! 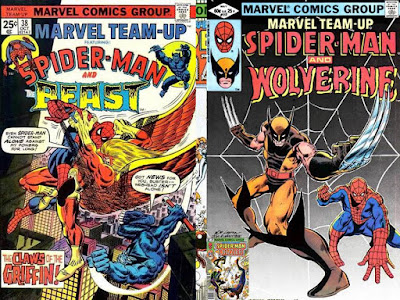 That issue ended Spider-Man's Marvel Team-Up run, but there were more individual X-Men team ups, but we'll save those for a future date!
Posted by Dave's Not Here Comic Blog at 3:50 AM