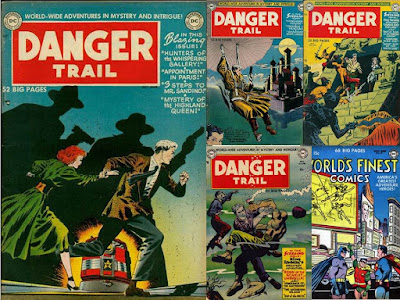 Looking back at comics in the early 1950s, one of the more collectible series was that of Danger Trail, the first four issues of which featured King Faraday, a counter-intelligence spy who was a former soldier, and named King by his dad as a joke ("king for a day"), King faced off against secret agents in exotic locations across the world....

King Faraday had five stories in the early 1950s, and most of them have been reprinted.... 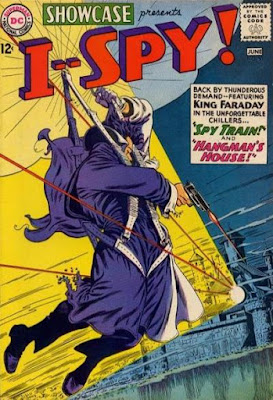 Showcase #50 (May-June, 1964) contained the first of the King Faraday reprints, with "Spy Train" from World's Finest Comics #64 (May-June, 1953) by Robert Kanigher, Carmine Infantino and Sy Barry...the last of the original King Faraday stories (originally meant for the never-published Danger Trail #6; the title was cancelled with Danger Trail #5, which didn't feature King).  This story has King playing spy games on the Orient Express, with the help of photographer Alonzo P. Davis (or is he helping?).  This story is also reprinted in the Greatest 1950s Stories Ever Told hardcover of 1990, and tradepaperback of 1992.

The other reprint in Showcase #50 is from Danger Trail #2 (September-October, 1950), which was the basis for this issue's cover, with the story of the "Hangman's House" by Robert Kanigher, Carmine Infantino and Joe Giella, with King breaking into a foreign government's stronghold to rescue a professor held hostage. 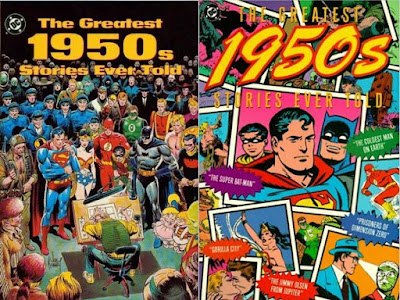 Best of all, Showcase #50 had a new 4-page sequence by Robert Kanigher, Carmine Infantino and Murphy Anderson that led into these stories, and tied the phrase "I -- Spy" to King Faraday (who next appeared in Showcase #100 in May, 1978, along with a good portion of the DC Universe, including the Flash and the Teen Titans, both of whom King later worked with....and took King into the DCU, as well as beyond the 1950s!). 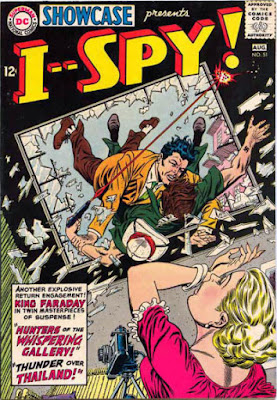 The first was "Hunters Of The Whispering Gallery" from Danger Trail #1 (July-August, 1950) by Robert Kanigher, Carmine Infantino and Joe Giella, with King overhearing a murder plot while getting on a train, and the hero working to save the pretty red-haired woman, Julie Stevens, who was the target of the murderers, and, after a few attempts by these men and others, finds that Julie had been photographed with Nazi war criminal on the run Martin Vormann, to prevent her from identifying him.  King saves the girl and catches the criminal.

The second story was from Danger Trail #3 (November-December, 1950) with "Thunder Over Thailand", by Robert Kanigher, Carmine Infantino and Joe Giella, with King tracking down ex-Nazi scientist, Colonel Nego, who had been killing other agents and leaving toy elephants with the murdered men.  King finds the fiend, destroys his headquarters, and the Colonel dies, crushed by an elephant statue!

Sadly, the story from Danger Trail #4 (January-February, 1951) with "The Reign Of The Scarlet Umbrella" by Kanigher/Infantino/Giella has not been reprinted, with King going into action after his friend, Police Inspector Raoul Dore, is killed by followers of tribal chief Ranavilo. 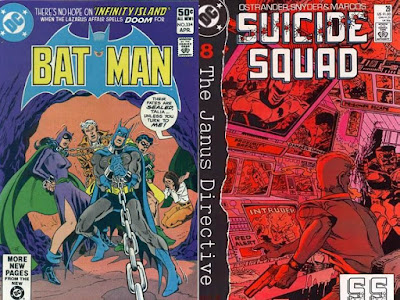 King survived all this action, and though he didn't spin off directly from his two Showcase appearances, did help Batman against Two-Face (in Batman #314 and #315), informed Flash about Saber-Tooth in Flash #290, worked with Batman, Robin, Catwoman and Talia against Ra's Al Ghul in Batman #333 to #335, helped the Dial H For Hero kids (Chris King and Vicki Grant) against the Wildebeest in Adventure Comics #483, before becoming the Central Bureau of Intelligence's contact to the New Teen Titans (starting with the third appearance of Deathstroke the Terminator in New Teen Titans #10 in 1981), and even liaison to Checkmate! and the Suicide Squad (and working with Amanda Waller and Sarge Steel) for a time, starting during the Janus Directive in Suicide Squad #29 in 1989. 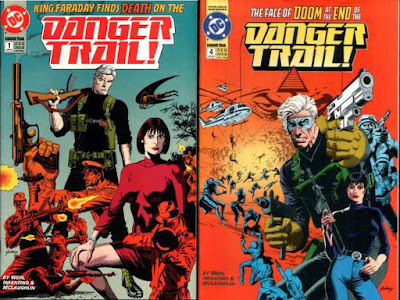 King Faraday even got a Danger Trail 4-issue mini-series from April to July, 1993, by Len Wein, Carmine Infantino and Frank McLaughlin, with covers by Paul Gulacy, facing off against the worldwide danger of fanatical cult leader, Kobra (which is why this was "The Serpent In The Garden File"), before continuing on working with Checkmate!

Posted by Dave's Not Here Comic Blog at 3:34 AM