Spider-Man Teams With Vision And The Scarlet Witch 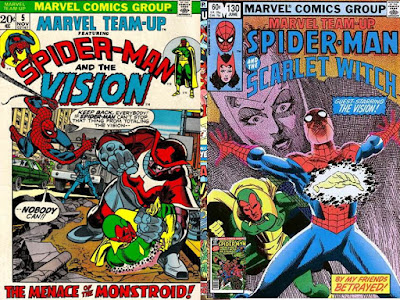 He's a density-altering synthezoid (synthetic android) created by Ultron, she's a reality-altering mutant who worked for Magneto in the Brotherhood of Evil Mutants...but, the Vision and the Scarlet Witch put aside their criminal pasts, and both went to work for the Avengers...

Better still, each of them teamed up with the friendly neighborhood Spider-Man!

A Vision Of Trouble 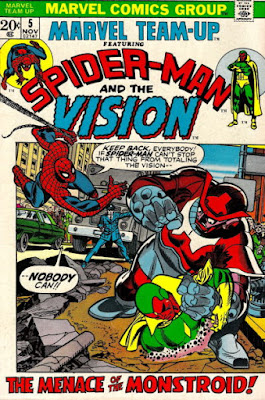 Marvel Team-Up #5 (November, 1972) gave us a whole new Vision....well, not really, but it was a chance for the character to shine away from the Avengers, facing off against the Monstroid code-named Ballox (a Skrull robot, left over from the Kree-Skrull War) in the tale "A Passion Of The Mind" by writer Gerry Conway, penciller Gil Kane and inker Mike Esposito.

Vision was passing out on the street, and thankfully, Spidey was there to lend a hand....and found it was the Puppet Master (foe of the Fantastic Four and father of Alicia Masters) who was controlling the Monstroid (which was causing the problems the Vision was having).  Vision went and phased through the Puppet Master, ending his control of Ballox, and Vision left Spider-Man to deal with Puppet Master in the next issue (with some Thing helping him, and the Monstroid ending up in the hands of S.H.I.E.L.D.), as the Vision went to rejoin the Avengers. 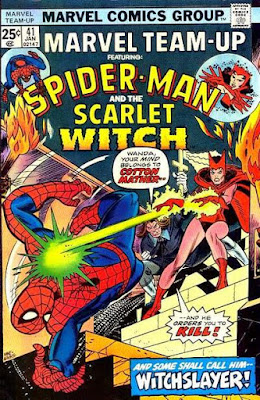 Spidey met up with Scarlet Witch in Marvel Team-Up #41 (January, 1976), but she wasn't quite herself then in the tale of "A Witch In Time!" by writer Bill Mantlo, penciller Sal Buscema and inkers Mike Esposito and Dave Hunt.

Cotton Mather took control of Scarlet Witch and had her come to Dr. Doom's castle in upstate New York (injuring Vision as she took a Quinjet from the Avengers to get there).  Wanda had enough of her own mind left to summon help, in the form of Spider-Man, but Spidey was no match for the Salem witch-hunter and his thrall...who used Dr. Doom's time machine to go back to his home in the 17th Century, with Spider-Man soon following to go rescue the Scarlet Witch from the time of the Salem witch trials (though not having much luck)....and soon a Vision appears (who also used the time machine)....leading into the next issue..... 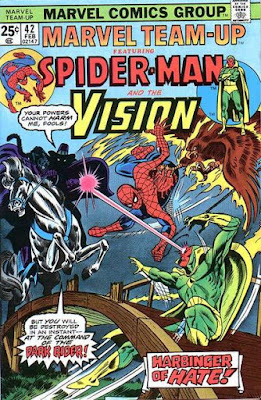 With Marvel Team-Up #42 (February, 1976), readers get "A Vision Of Hate" as writer Bill Mantlo, penciller Sal Buscema and inkers Mike Esposito and Dave Hunt continue their story, with Vision working with Spider-Man to free the Scarlet Witch from the Salem witch trials, and facing off against Cotton Mather.

The heroes get separated, and Spidey ends up in prison, where he finds out more of the trials, and how Cotton Mather stirred up the controversy to use witches for his own ends.  Vision soon joins, and the two heroes go looking for Cotton Mather, finding out he is working for a sorcerous being calling itself the Dark Rider, who was powering Cotton to lure beings so that he may get more power...and while relating his plans, Vision attacks. 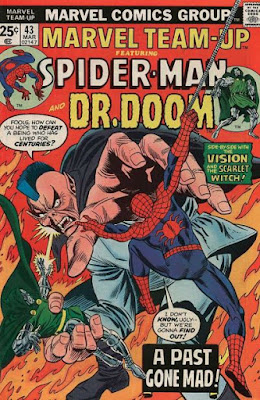 This leads into the next issue, Marvel Team-Up #43 (March, 1976) with "A Past Gone Mad" by writer Bill Mantlo, penciller Sal Buscema and inkers Mike Esposito and Dave Hunt, and it was Dr. Doom who was mad (because all these people kept breaking into his castle and using his time machine!).

Sadly, this worked in the Dark Rider's favor, as he battled Dr. Doom, the Dark Rider also drew power from Doom, and the heroes (taking Dr. Doom along) had to continue the battle...

...with the Dark Rider eventually winning, or so it would seem.... 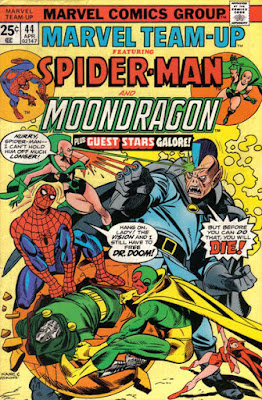 At least until Marvel Team-Up #44 (April, 1976), with Moondragon (an Avenger with mental powers) who was having visions of the last three issues, walks away from Iron Man and gets pulled into 1692 by the Scarlet Witch to help in "Death In The Year Before Yesterday" by writer Bill Mantlo, penciller Sal Buscema and inkers Mike Esposito and Dave Hunt.

With the help of Moondragon, Vision, Scarlet Witch and Dr. Doom, Dark Rider is defeated and Cotton Mather has his mind broken.  Dr. Doom is nice enough to let the heroes use his time machine to get home, but Spidey lingers (sadly, not being able to save those accused of being witches from hanging....).

I Found The Snake 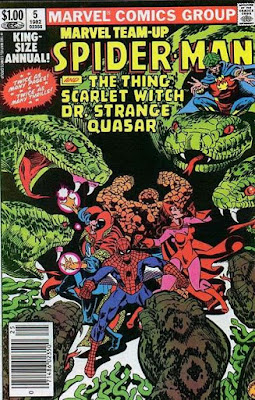 All that time travel makes you want a simple story...but Marvel Team-Up Annual #5 (1982) isn't quite as simple as it seems, with Spider-Man not only working with the Scarlet Witch, but also the Thing, Dr. Strange and even former agent of S.H.I.E.L.D., Quasar...all dealing with the Serpent Crown in "Serpent Rising" by writer Mark Gruenwald, who also provided the pencils...and inked by Jim Mooney and Al Milgrom.

This was a chance to review the long history of the Serpent Crown as it passed through the ancient hands of Conan and Kull as they fought the Serpent Men, to more modern times with Namor the Sub-Mariner, his foe Krang, the Serpent Squad and even as Hellcat got her powers and faced the Squadron Supreme, as the Elder God Set tried to use the crown's power to take over the world by first taking control of Quasar at Project: PEGASUS (where it had been kept for safekeeping).  Thankfully, this awakening stirred Spider-Man, Dr. Strange, the Thing and the Scarlet Witch (who had all faced the Serpent Crown before) to prevent Set's plans of making everyone his serpent slaves! 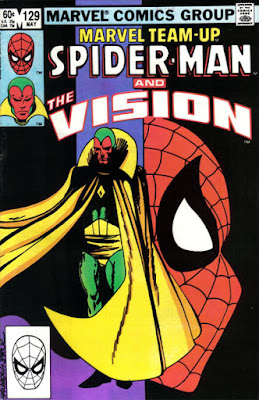 Time for a tale that focused on only Vision and Spider-Man, and that is in Marvel Team-Up #129 (May, 1983), with Vision going to New Hampshire on his own, "And Much To Ponder Before The Dawn" by writer J. M. DeMatteis, penciller Kerry Gammill and inker Mike Esposito.

In New Hampshire, Vision encounters androids in the small town of Rain, but these androids seem familiar, as they look like famous authors like Mark Twain, Albert Einstein, William Shakespeare and Fiodor Dostoyevsky (all left behind by Fantastic Four foe, the Mad Thinker after a battle with Captain America and Team America in Captain America #269).  Peter Parker ends up in Rain as well, taking photos for the Daily Bugle with reporter Andrew Pauncholito, following up on a murder case where the murder looked like Fiodor Dostoyevsky.  Soon, the police arrive, and begin shooting the androids, until they are protected by their new enforcer and protector...the android, Alpha, who was bested by Vision and Spider-Man. 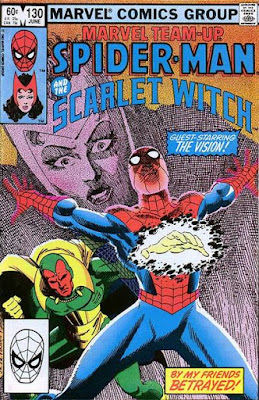 With Vision occupied, the Defenders' magical foe, Necrodamus, takes advantage, capturing the Scarlet Witch while disguised as Vision in Marvel Team-Up #130 (June, 1983) in "Till Death Do Us Part" by writer J. M. DeMatteis, penciller Sal Buscema and inker Mike Esposito.

The dispossessed spirit that is now Necrodamus wants the Vision's android body for his own, and promises to free Vision's wife if Vision lets the spirit in.  Meanwhile, Andrew Pauncholito has figured out Peter Parker is Spider-Man....and threatens to expose him to further his own career.  Vision gives up his body to save his wife, and Spidey and Scarlet Witch team up to exorcise Necrodamus, and eventually do...teaching Andrew a thing about humanity (inspiring him not to reveal Spidey's secret identity to the world...knowing what trouble that would cause the hero). 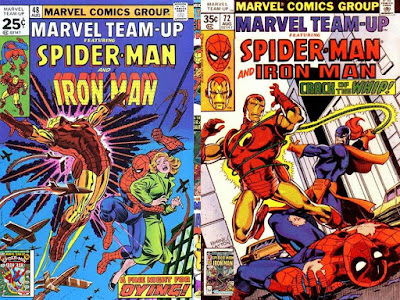 Sadly, Spidey's identity was later outed during Marvel's  Civil War (for a time), thanks to Iron Man.

As alluded to, Iron Man had many team-ups with Spider-Man, and they follow soon!

Posted by Dave's Not Here Comic Blog at 3:41 AM