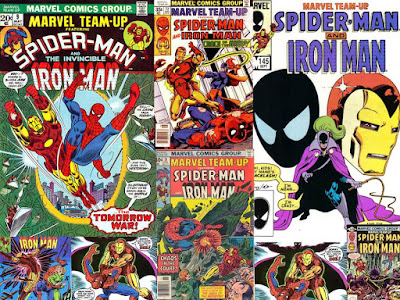 Back in the day, Spider-Man and Iron Man got along, and they teamed up quite a bit!

Iron Man's earliest adventures with Spider-Man in Marvel Team-Up were quite involved, pulling in people from all over the Marvel Universe, Avengers and more!

Time to take a look back at what Tony Stark and Peter Parker's alter egos did together.... 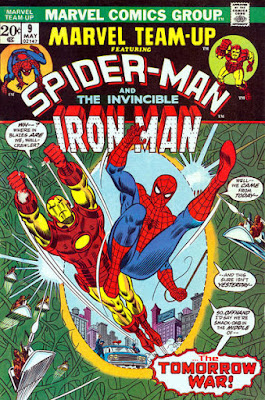 The first time Spider-Man and Iron Man worked together in MTU was in Marvel Team-Up #9 (May, 1973) with the start of "The Tomorrow War" by writer Gerry Conway, penciller Ross Andru and inker Frank Bolle.

This time, Spider-Man comes to the aid of the Avengers, whose mansion is surrounded by a force field, with Iron Man and Spider-Man trying to break through, but instead, they end up in the 23rd Century, where the duo meet Zarrko, the Tomorrow Man (an old time-traveling foe of Thor's from the future).  The pair search around for their captive friends, finding them....

....held captive by Kang the Conqueror (a time traveling foe of the Avengers!). 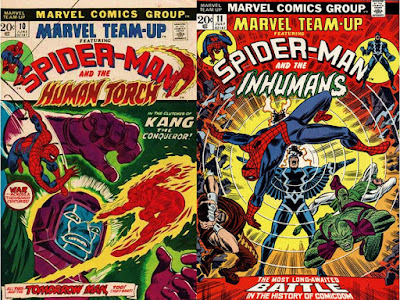 ...but that is for the next couple of issues (where Iron Man is not as involved, but instead, Spidey gets help from the Human Torch, and then, the Inhumans!).

Human Torch had his own team-ups in MTU, and the Inhumans were without Medusa and Crystal.... 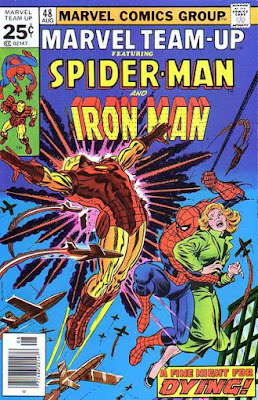 Spidey had just returned from a battle with the Basilisk with the Thing (and before that, a time travel adventure that started with the Scarlet Witch and Vision, and ended in the alternate futures of Killraven and Deathlok), where Spidey is knocked off his swing by an explosion at Stark Industries, and saved by Iron Man.  While conferring with police detective Jean DeWolff (introduced in this issue), the heroes are the focus of a model plane attack (with bomb!) in her office, with Spidey headed to stop the villain who launched the plane....

...the Wraith (who also debuts in this issue!). 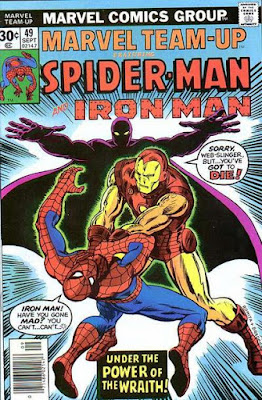 Iron Man and Spidey's battle against the Wraith continues into Marvel Team-Up #49 (September, 1976) with "Madness Is All In The Mind!" by writer Bill Mantlo, penciller Sal Buscema and inkers Mike Esposito and Dave Hunt.

Spidey is taken prisoner by the Wraith, who reveals he has mind-control powers as well, so Spider-Man, Iron Man and Jean DeWolff have troubles battling the villain, but do cause the Wraith to flee.  Back in Jean's office, she shows the heroes a letter from the Wraith, but it appears in the handwriting of her brother Brian, an officer supposedly killed in the line of duty.

Spidey thinks they may be dealing with the supernatural, a realm out of reach for Spider-Man and Iron Man, but not for a master of the mystic arts like Dr. Strange.... 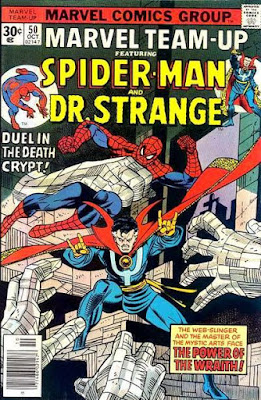 Iron Man takes a little back seat in this issue, as Spidey hooks up with Dr. Strange in Marvel Team-Up #50 (October, 1976) as they explore "The Mystery Of The Wraith!" by Bill Mantlo, Sal Buscema, Mike Esposito and Dave Hunt.

Dr. Strange and Spider-Man find out that Brian was not killed in the shootout as everyone thought, and Iron Man does find Phillp DeWolff's fingerprints on the handwritten letter from the Wraith (Phillip being Brian and Jean's father).  After Jean is captured by the Wraith, she discovers that Brian is the Wraith, that he was wounded in the shoot out with a bullet in his brain, and taken by their father, who performed experiments on his son, linking their minds (allowing Phillip control, but Brian having mental powers).  Iron Man arrives trying to stop the Wraith with a special helmet, taking out the Wraith for a time. 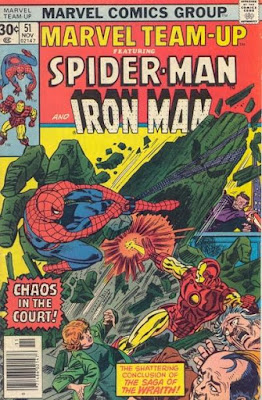 Peter Parker gets assigned to cover the case against the Wraith (both Phillip and Brian DeWolff), but gets in an argument with his boss J. Jonah Jameson, thus being able to leave and attend as Spider-Man, even as expert witnesses on mind control like the X-Men's Professor X and the Avengers' Moondragon are called, and S.H.I.E.L.D. agents unsuccessfully prevent the defendants use of their mind powers.  Phillip reasserts control of the Wraith, at least until Dr. Strange lives up to his surgeon credit, using his mystic powers and medical knowledge to take the bullet from the brain of Brian as Spider-Man and Iron Man fight the menaces that Phillip is causing Brian to make up.  The court finds Phillip guilty, but Brian innocent (and the judges were secretly telepaths and telekinetics as well?)

All the while, the Hulk jumps around in New Mexico (though his team-ups would have to wait an issue, as Spidey worked with Captain America in the next issue, and then went to Marvel Team-Up's first annual to work with the X-Men.....), and the Wraith would appear again in issues of Iron Man, as well as the Amazing Spider-Man, Morbius the Living Vampire and the Punisher. 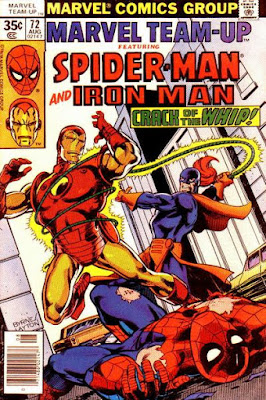 After their lengthy battle with the Wraith, Spidey and Iron Man might have longed for a simpler time, like in Marvel Team-Up #72 (August, 1978) with a "Crack Of The Whip!" by writer Bill Mantlo, and art by Jim Mooney (and a cover by John Byrne and Bob Layton).

At least it seemed like a simple case, with Spidey trying to stop warehouse thieves, before Maggia enforcer and Iron Man foe, Whiplash, stopped him.  The crooks fled (though Spidey got a tracer on them), and Spidey, along with Jean DeWolff and Iron Man, prepare to go and face off against Whiplash.  Meanwhile, Whiplash arrives at the Maggia's base, where we find out that the Wraith is in control, heading up this Maggia's branch.  The heroes soon show up, with Iron Man fighting Whiplash's whips, and Spidey dealing with the Wraith's mind-projected illusions, until Jean stops her brother, causing Whiplash to turn on the Wraith, and the Wraith to defeat Whiplash.  The Wraith goes off with Jean as the police take Whiplash away. 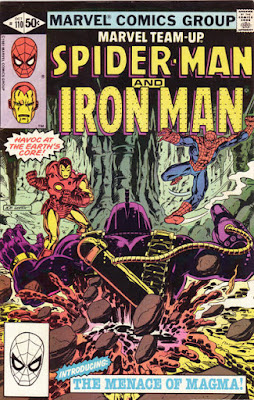 As Spidey is headed toward the Daily Bugle, he saves a falling window washer, who had been shaken loose from his perch by an earthquake in New York!  When Spidey goes into the Daily Bugle as Peter Parker, he gets an assignment to photograph the news conference that Tony Stark has called about how he plans to deal with New York's new earthquake problem.  This conference is interrupted by an earthquake, with Peter and Tony secretly changing into their alter egos to deal with it.  When Stark's tracking device pinpoints the area that started the trouble, the two heroes go to investigate, and find armed thugs there, under the leadership of Magma, a mining engineer who lost his company and his wife to environmentalists, and was to take revenge with his new armored suit and weapons, but his earthquake threat is stopped by Spider-Man and Iron Man (though Magma escapes, to cause Tony Stark trouble later....and ends up being the first foe that James Rhodes faces when he wears the Iron Man armor for a time! 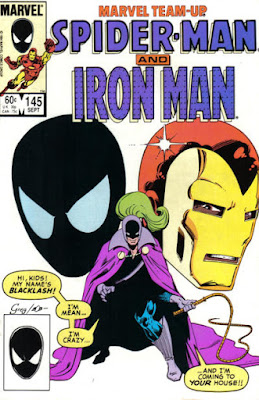 It's new hero meetings with Marvel Team-Up #145 (September, 1984) and the story "Hometown Boy" by writer Tony Isabella, penciller Greg LaRocque and inker Mike Esposito (under a cover by Greg LaRocque and Bob Layton).

Spidey's in his symbiote suit he got during the Secret Wars, James Rhodes is still acting as Iron Man and wearing the armor, and even Whiplash has a new look and name, now calling himself Blacklash.  They all meet at an electronics convention in Cleveland, with the newer Iron Man having trouble dealing with this improved Iron Man foe, but thankfully, Spidey is there to help defeat Blacklash....and the heroes head home, while Blacklash ends up in jail.

James, of course, later gets his own armor and becomes War Machine, after Tony takes back the Iron Man mantle. 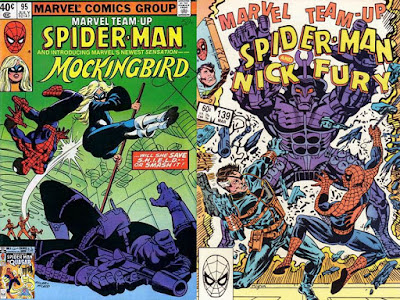 Still, Spidey had plenty of team-ups to chronicle, and maybe it's time to look at the tech on those team-ups, and deal with some agents of S.H.I.E.L.D.!

Posted by Dave's Not Here Comic Blog at 4:03 AM