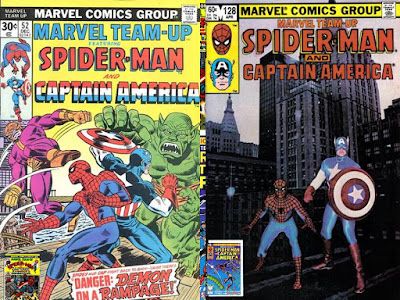 Back in the day, Spider-Man was a friendly, neighborhood guy, and teamed up with various Marvel heroes over 150 issues (and 7 Annuals) from 1972 to 1985 in the title Marvel Team-Up.

Spidey met many Avengers there (though he usually met them before MTU as Spidey was always out and about in the Marvel Universe), and some had repeated visits.

So, let's take a look back at the times that Captain America visited Marvel Team-Up as a star.... 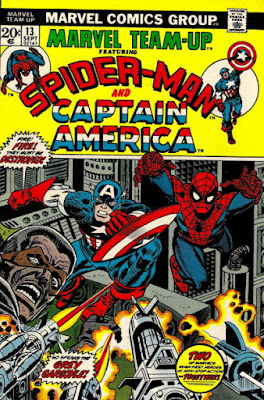 The star-spangled Avenger first appeared in MTU in Marvel Team-Up #13 (September, 1973), with "The Granite Sky!", in a story by writer Len Wein, penciller Gil Kane and inkers Frank Giacoia and David Hunt...


...when Cap was helping out Nick Fury and his agents of S.H.I.E.L.D. by taking on the Grey Gargoyle (a Thor foe who had the power to turn people into stone, who also faced Iron Man as well, and Cap just recently in Captain America #142, where Steve faced him with his partner, the Falcon, though Falcon only appears here in flashback) and the agents of A.I.M. (scientists with evil plans who are the foes of S.H.I.E.L.D.).  Cap and Spidey chase down the stony foe, though Peter was a little off his game, dealing with the death of Gwen Stacy at this time.


A Kick In The Head 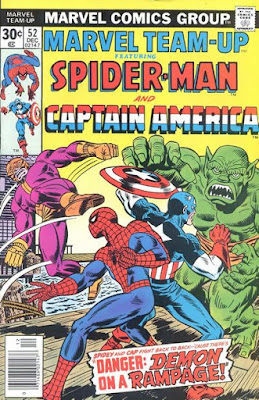 Next up for Spidey and Cap is Marvel Team-Up #52 (December, 1976) with "Danger: Demon On A Rampage" by writer Gerry Conway, penciller Sal Buscema on breakdowns, with Mike Esposito on finished art on the figures and Dave Hunt on backgrounds as well as inking.

This time around, Cap and his friends including Falcon, Texas Jack, Leila Taylor and the Night People come back from the Dark Dimension (and Captain America #203), though the two heroes don't speak much at this point and go about their lives.  Meanwhile, Cap's foe, Batroc The Leaper, heads out as well, and finds one of the creatures from the Dark Dimension, and attempts to befriend it to use to steal uranium from S.H.I.E.L.D., but Cap and Spidey happen to show up, and defeat Batroc, with the irradiated creature wandering off, with Cap later killing it to save Spider-Man.  Peter Parker later sees Cap, thinking how good the American hero has it, knowing nothing of Cap's moral dilemnas.

Dropped From The Sky 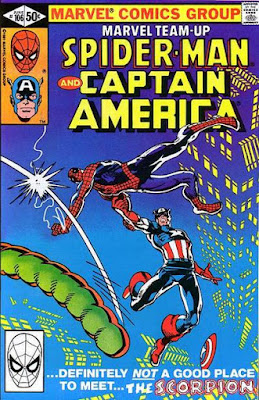 Slightly less serious was the next meeting of these heroes in Marvel Team-Up #106 (June, 1981) with "A Savage Sting Has -- The Scorpion" which has old Spider-Man (and occasionally Captain America) foe, the Scorpion, return in this tale by writer Tom DeFalco, penciller Herb Trimpe and inker Mike Esposito.

This time around, Scorpion was losing his mind at a mental hospital, until the well meaning doctors give him his costume back (allowing mental patient Mac Gargan) access to his powers and to escape, to track down J. Jonah Jameson (who originally had Mac experimented on, to make a man to bring down Spider-Man).  Scorpion puts into play an attack against the Daily Bugle, which succeeds in driving business away from the newspaper, but not people seeking employment, as artist (and secretly Captain America) Steve Rogers comes in looking for work, and meets Peter Parker.  Later, the two heroes face the Scorpion again (who shows off his new tail-blaster weapon) and they save J. Jonah Jameson from the foe (though, Spidey does it under protest, as JJJ has increased his headline attacks against the wall-crawling hero!). 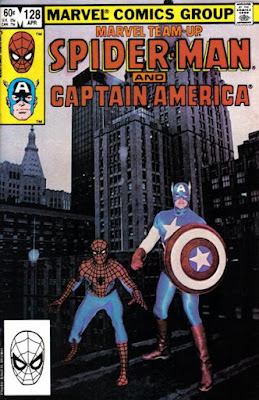 Last but not least from the days of MTU, is Marvel Team-Up #128 (April, 1983) with "Sweet Temptation" by writer J.M. DeMatteis, penciller Kerry Gammill and inker Mike Esposito.

This time, Peter encounters Steve Rogers on a date with his girlfriend, Bernie Rosenthal, at a carnival...but the good times are interrupted as the venomous Vermin (a rat like being who has faced Cap before) shows up to send the crowds into a panic, and the heroes into action, eventually tracking down the villain and still making amends to their friends in the process.

Cooler still was this early photo cover by Eliot R. Brown, and there's even a small essay and some unused shots in the issue...with letter John Morelli as Spider-Man and artist Joe Jusko as Captain America (ironic, as Steve Rogers himself was making a living as an artist at the time!). 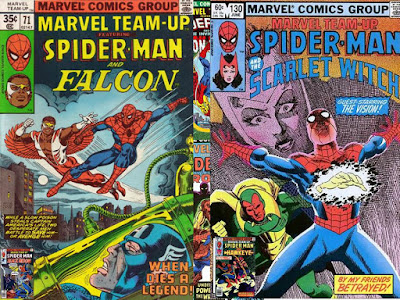 Check back for more coverage of Spidey meeting with various Avengers in Marvel Team-Up all this month!
Posted by Dave's Not Here Comic Blog at 3:42 AM