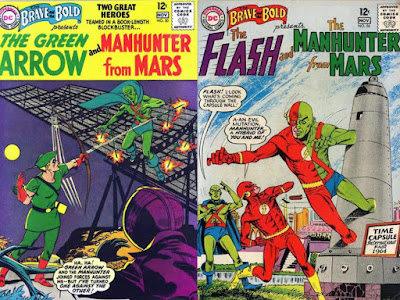 Martian Manhunter was once a rising star at DC Comics.  A charter member of the Justice League of America, J'onn J'onzz was also one of two characters who was picked to start a new team-up magazine feature in Brave and the Bold, and he was the first of those two characters to return to the title....

...so, let's take a look at those two appearances!

Brave and the Bold 50 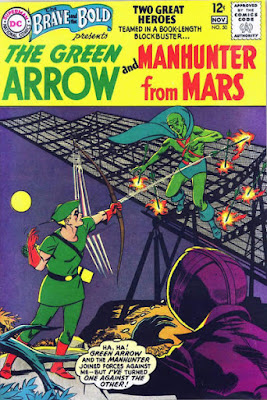 First up is Brave and the Bold #50 (October-November, 1963), where the Martian Manhunter worked with Green Arrow (and his partner, Speedy), in "Wanted -- The Capsule Master" by Bob Haney and George Roussos.

Brave and the Bold 56 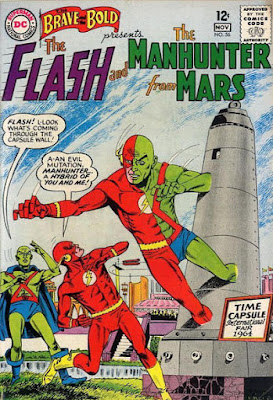 The second (and last) of Martian Manhunter's appearances in B&B was in Brave and the Bold #56 (October-November, 1964) where J'onn and the Flash have to deal with the "Raid Of The Mutant Marauders" (by Bob Haney and Bernard Baily).

Flash and the Martian Manhunter are attending a fair with an exhibit on the Justice League, when they have to face an alien mutant android that manifests the powers of the Justice League members two at a time.  Even worse, the alien turned its rocket into a bomb, that was going to explode, and destroy the Earth.  J'onn flies to Argon, the home of the creature, to learn of its history, and that the planet was ruled by Tatania.  To attempt to fool the creature into leaving Earth, J'onn calls on Hawkgirl (who's husband, Hawkman, just joined the JLA) to disguise herself as Tatania, to convince the menace to leave Earth.  Only problem is the creature sees through the disguise, and almost detonates the bomb, before the real queen arrives, wherein the android destroys himself on command, saving Earth from the bomb. 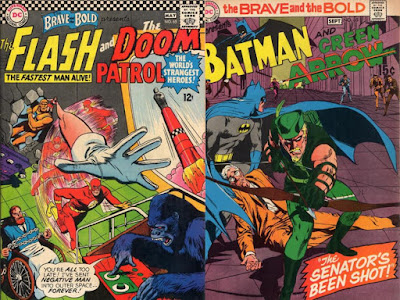 Now, Green Arrow would return time and time again to team-up with Batman (being his partner in B&B most often; though Flash tried to give Green Arrow a run for his money).  Flash had the uniqueness of being the second most used host of B&B after Batman....but, sadly, the Martian Manhunter never returned to meet Batman in B&B, though J'onn did meet with Superman solo, once in World's Finest Comics, and once in DC Comics Presents.