Batman Vs. The Batmobile 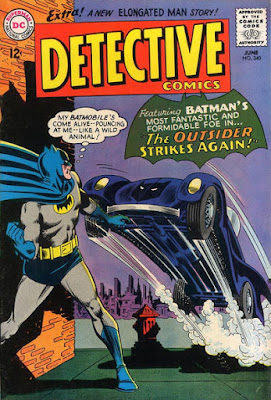 Usually, a man can count on his car, but not so for Batman in this very odd issue of Detective Comics, where Batman faced off against the Batmobile!

What's worse, is that it wasn't only the Batmobile, but all of Batman's crime-fighting weapons he was facing, as Batman and Robin had to deal with the time that "The Outsider Strikes Again" in Detective Comics #340 (June, 1965) by Gardner Fox, Sheldon Moldoff and Joe Giella.

The Outsider was a villain of Batman's who seemed to have many mind over matter powers, turning all of Batman and Robin's weapons like their Batarangs and Bat-ropes against them, then the weapon would turn to dust after facing the Dynamic Duo.  Luckily, Batman realized that dust could stop the Outsider's control, so had dust bombs ready to counter the Outsider's attacks. 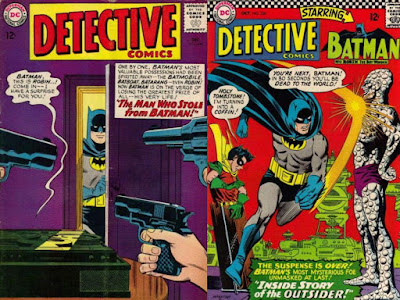 The Outsider was a serialized villain of the Batman's during his "new look" era, running on and off (and mostly off panel) from Detective Comics #334 (December, 1964) to Detective Comics #356 (October, 1966), with his identity being a mystery, but being someone close to Batman.

Check back, same Bat-time, same Bat-channel, and the mystery of the Outsider may be revealed!