Spider-Man Teams With Black Panther and the Falcon 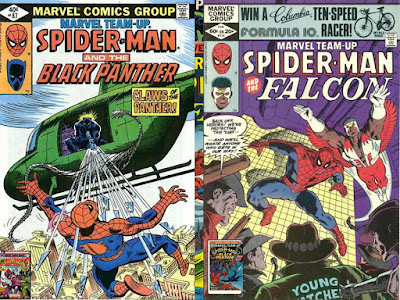 Spidey has met plenty of Avengers over the years, but some of them, he met when they were not part of the team.

Let's take a look at these high-flying team-ups! 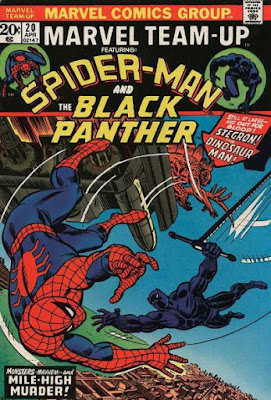 How do dinosaurs end up on Broadway?  Well, that question is answered in Marvel Team-Up #20 (April, 1974) with "Dinosaurs On Broadway" by writer Len Wein, penciller Sal Buscema and inkers Frank Giacoia and Mike Esposito.

Picking up from the previous issue, where Spider-Man and Ka-Zar fought the new villain, Stergon the Dinosaur Man, Spidey hitched a ride from the Savage Land aboard Stergon's flying ship full of dinosaurs!  Black Panther gets involved thanks to the Avengers' butler, Jarvis, and has to help Spidey with this new menace to Manhattan.  Interesting that Marvel Team-Up could have stories over multiple issues, but not carry the guest star over (but Ka-Zar had his own new mag to get back to, with Shanna the She-Devil!).  Even more interesting is how Spider-Man and Black Panther handled all these dinosaurs on their own (and then T'Challa could spend his time in his book, Jungle Action!). 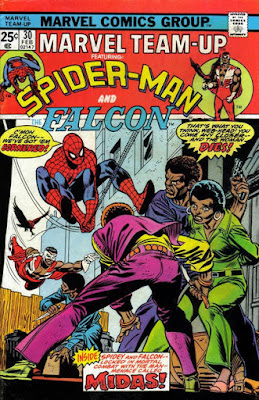 "All That Glitters Is Not Gold" is the lesson of Marvel Team-Up #30 (February, 1975) by writer Gerry Conway, penciller Jim Mooney and inker Vince Colletta, with Spidey coming to the rescue of fellow Daily Bugle worker, Glory Grant, and her cousin, who has now joined a gang (but seems to be under mind control).  Spidey checks it out, while Glory calls on Sam Wilson (Falcon's alter ego) for help (Falcon had a little free time, as his usual partner, Steve Rogers, had briefly given up being Captain America and was in action as Nomad at this time).


The two heroes end up meeting, and then facing the menace of the man called Midas (it says so right on the cover blurb!).  Spider-Man and the Falcon were able to uncover his identity and put an end to his drug trafficking.... 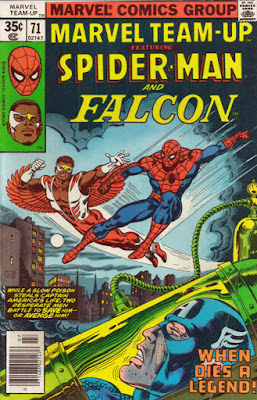 Falcon comes to help Captain America when he calls, only to find his partner dying from a poison orchid in "Deathgarden" in Marvel Team-Up #71 (July, 1978) by writer Bill Kunkel, penciller Al Wenzel and inker Dan Green.  Nick Fury and the agents of S.H.I.E.L.D. were able to take Cap to a S.H.I.E.L.D. medical facility, but Falcon takes the lead to track down the poison and save Captain America!  Spider-Man happens to be stopping a robbery at a government facility that Falcon is checking out, and the two heroes end up battling for a bit, then team up, finding out that if it was a plant that was killing Cap, the likely villain behind it was the Plant-Man!


Falcon and Spider-Man work together to stop the villain (with Falcon using new moves like using his wings as a shield), and bring the cure to save Captain America (though Falcon and Captain America would soon give up their regular partnership, though Falcon meets up with the Defenders soon after this, then briefly joins the Avengers soon after that), with Nick Fury privately thanking Spidey for his help in this case. 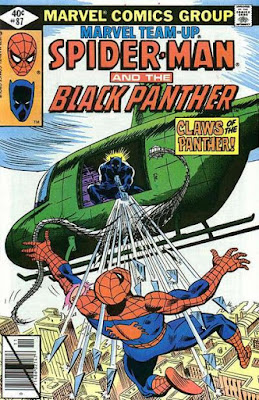 Peter Parker is on assignment for the Daily Bugle, covering businessman Thomas Agar's preliminary hearing (for his company taking over half a million from the country of Wakanda), when Black Panther attacks in Marvel Team-Up #87 (November, 1979) in "The Razor's Edge!" by writer Steven Grant, penciller Gene Colan and inker Frank Springer.


Very quickly it is discovered that it wasn't Black Panther on the rampage, but a villain called Hellrazor, all a part of a plot to make T'Challa look evil and get access to the Wakandan vibranium (a special metal that is only found in the African country that Black Panther rules) for the evil Roxxon Corporation.  Spidey and Black Panther team-up to defeat Hellrazor, never quite getting a full hint of Roxxon's involvement in this case, with Spidey going back to his normal life, and Black Panther enjoying his visit with the Avengers after being reunited with them thanks to the Collector's plans to thwart Korvac.


It All Comes Together 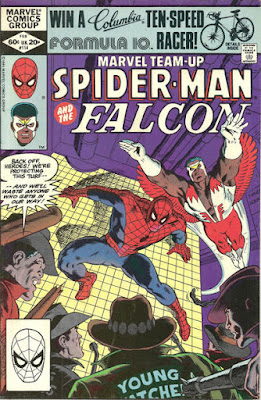 Spidey tries to enjoy some time off as Peter Parker, but Aunt May ends up a victim of crime, pulled off by the Young Watchers, a vigilante group that supposedly protects people in Marvel Team-Up #114 (February, 1982) in "The Heat In Harlem!" by writer J.M. DeMatteis, penciller (and co-plotter) Herb Trimpe, and inker Mike Esposito. 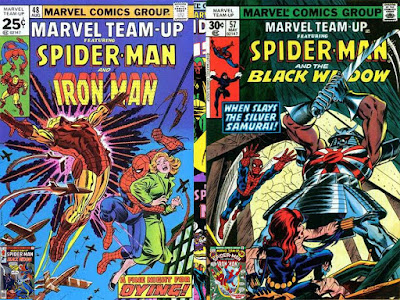 That concludes our business of looking at Spider-Man's team-ups with these two Avengers, but there are more to come!
Posted by Dave's Not Here Comic Blog at 3:16 AM