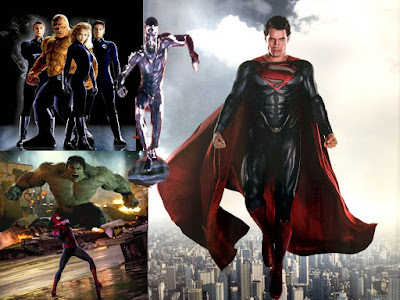 Superman has made quite a splash in the movies lately, working with Batman and Wonder Woman....

...but, being a great guy, Superman also worked with various Marvel heroes back in the day.

Here's a look at a few of those intercompany crossovers between DC Comics and Marvel! 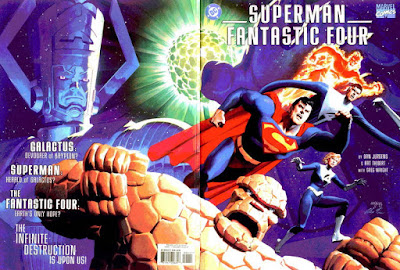 First up, is the tale from  Superman / Fantastic Four #1 from April of 1999 by writer/artist Dan Jurgens and inker Art Thibert with "The Infinite Destruction".

A meeting of the first super-hero and the first family of comics should be large....and this one was indeed, with a throwback to tabloid size no less.  It also started with a large concept....what if Galactus caused the destruction of Krypton?  No Elseworlds here, as Superman found an old computer message from Jor-El stating so, but it did send Superman in search of the world-eater, even resulting him Superman becoming a herald of Galactus, no less, and giving the Fantastic Four and the Cyborg Superman (himself with origins tied to the Fantastic Four) a bit to content with.  A bit odd, as it was hard to match Superman with all four members (the Thing, Mr. Fantastic, Human Torch and the Invisible Girl) of the team, but still a galaxy full of fun reading.

Gamma Back In Time 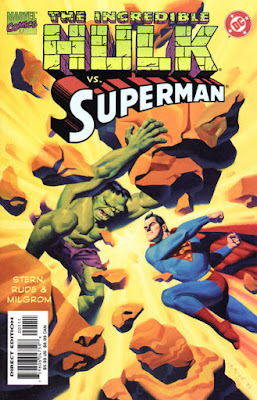 Next, going back to a simpler time for both members of the team-up, is writer Roger Stern, penciller Steve Rude and inker Al Milgrom for July of 1999's Incredible Hulk vs. Superman #1 and "Double Lives".

This was a story told in flashback, with Superman thinking back to the early days of his (and Hulk's) career....with Lex Luthor being contracted to build a Gamma Ray device by  General Thunderbolt Ross of the U.S. Army to stop the Hulk (though Clark Kent knows he'll use Bruce Banner's device to stop Superman).  Cooler still was a little encounter between Rick Jones and Lois Lane....  A tale that looks back at a simpler time in comics, sadly in a more regular sized comic instead of a larger one, but still it has a good time showing readers a different view on super-hero intercompany crossovers, and should leave most readers satisfied as well. 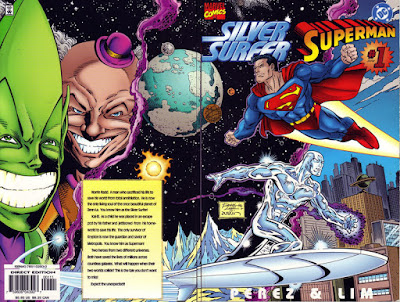 It's a battle in space and across dimensions with "Pop" for Silver Surfer/Superman #1 (November, 1996) by writer George Perez, penciller Ron Lim and inker Terry Austin.

The story says it's a team-up of Superman and the Silver Surfer, but the best part of the issue is that it is a battle of Fantastic Four foe, the Impossible Man, and Superman's 5th dimensional menace, Mr. Mxyzptlk.  The two cause quite a bit of trouble by switching the heroes in time and space, and this is truly a chance to sit back and enjoy the shenanigans that these two tricksters get up to.  Odder still is how easily Superman fits in the world of the Fantastic Four, as both Silver Surfer and Impossible Man both got their start in Marvel's first family title.... 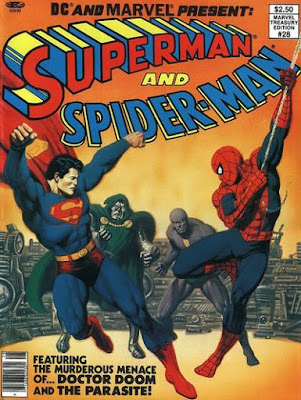 Quite the collection of the Marvel Bullpen here....though quite a few of these folks would go on to have success at DC Comics as well! 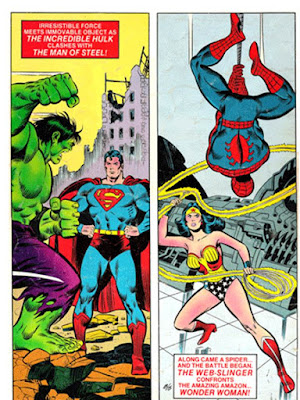 This was the second team-up of Superman and Spider-Man, this time around facing off against Superman foe, the power-draining Parasite, and sometime Spidey foe but better known for facing the Fantastic Four, Latverian monarch, Dr. Doom.  Better still, this tale also included a few other characters from Marvel and DC Comics, giving us the treat of seeing Superman face the Hulk for the first time, as well as seeing your friendly neighborhood Spider-Man encounter Wonder Woman....

....and you can see that on the back cover by John Buscema and Joe Sinnott.  A little leaning towards Marvel with this team-up (as Parasite was more of a stooge, manipulated by Dr. Doom), but seeing DC heroes dealing with these problems still made for a great read. 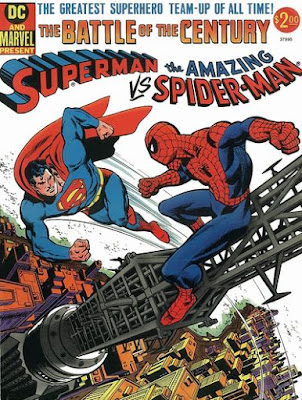 The start of it all, the tabloid sized Superman vs. the Amazing Spider-Man #1 of 1976 with "The Battle Of The Century!" by writer Gerry Conway, penciller Ross Andru and inker Dick Giordano (with Neal Adams touching up some Superman images, John Romita Sr. doing the same for Peter Parker, and Terry Austin inking the backgrounds...with Carmine Infantino doing a rough design on the cover, and it being finished by Ross Andru, and inked by Dick Giordano and Superman being touched up by Neal Adams, and Terry Austin inking the backgrounds as well).

With all that, you'd think the book would be nothing but credits....but, there was a story there as well. 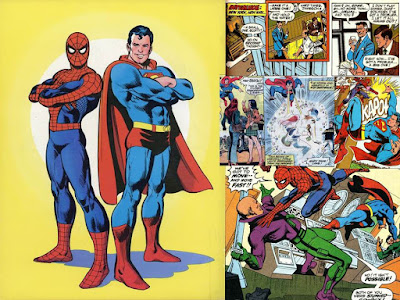 Superman puts Lex Luthor in prison, while Spider-Man does the same with his foe, Doctor Octopus...just so happens, it is the same prison and the two escape together, and end up working together, just as WGBS/Daily Planet and the Daily Bugle are working together (which results in Clark Kent meeting Peter Parker, as well as Morgan Edge and J. Jonah Jameson), as well as putting both Lois Lane and Mary Jane Watson together....to be kidnapped by what looks to be Superman.  It was really Luthor in disguise, but that brings out the real Superman, as well as Spider-Man, and after a brief brawl (where Luthor helps Spider-Man with a dose of red sun radiation to make him closer a match for the man of steel....), the two heroes realize who the real villains are, and team-up to take them down (and save their ladies) at the orbiting HQ of the Injustice Gang.  All in all, exactly how a big team-up should go down, all the way through to the back cover by Ross Andru (with Neal Adams redrawing Superman), and inked by Dick Giordano. 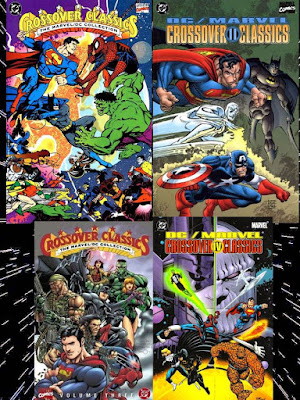 Best of all, these stories were all reprinted in 4 volumes of DC/Marvel Crossover Classics from 1991 to 2003, along with a few other crossover tales as well.

Most of those stories involve Batman meeting various Marvel heroes, like Spider-Man, Daredevil, the Punisher, Captain America and the Hulk, but there are a few more, with Green Lantern meeting Silver Surfer, Darkseid meeting Galactus, and even the New Teen Titans working with the X-Men.

More details on Batman's various team-ups are here, and likely we'll cover the rest sometime soon.  It seems Batman and Superman are enough to worry the rest of the Marvel universe on most days.... 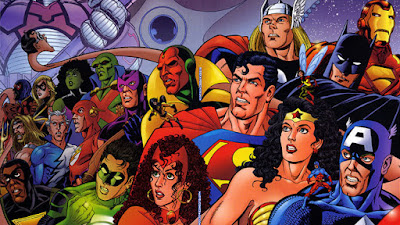 Of course, there was a meeting of the JLA and the Avengers as well, but that also deserves a looking into all on it's own, as this team up had history long before it happened in 2003.