Spider-Man Teams With The Black Widow 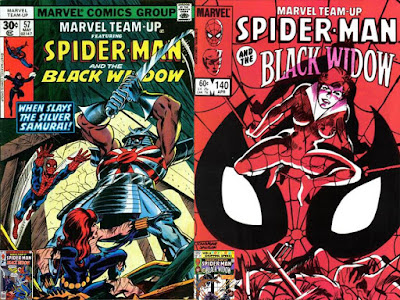 Seems a natural, Spider-Man teaming up with the Black Widow.  After all, when she was giving up being an Iron Man villain, she stopped by Spidey's title to get a costume change (to the costume she used in most of her appearances in Marvel Team-Up).


So, let's take a look at those team ups! 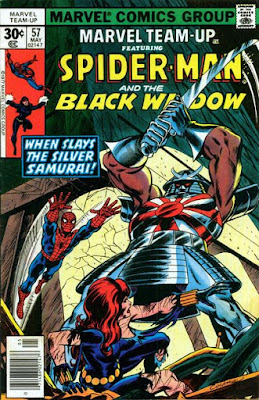 The stories in MTU were usually short, being one or two issue affairs, but Marvel Team-Up #57 (May, 1977) laid the foundation for future tales, with "When Slays The Silver Samurai", and a meeting of Spider-Man and Black Widow by writer Chris Claremont, penciller Sal Buscema and inker Dave Hunt (and under a Dave Cockrum cover).

This was the second appearance of the Silver Samurai (looking more the part than his first appearance in Daredevil #111), with him facing Spider-Man, as Spidey tries to stop some would-be thieves.  Meanwhile, Black Widow is in New York (taking a break from the west coast Champions), trying to find Nick Fury, and warn S.H.I.E.L.D.  Being unsuccessful, Black Widow finds Spider-Man battling the Silver Samurai, and comes to Spidey's aid.  The two battle the warrior, eventually defeating the Silver Samurai, and they recover a small statue that he had stolen.

But, more would come of this simple encounter. 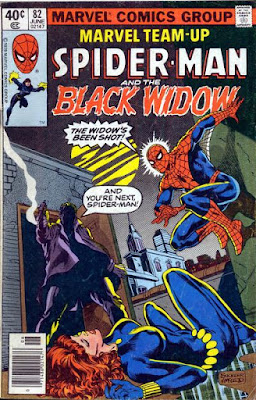 Spidey next encounters Black Widow in Marvel Team-Up #82 (June, 1979, by writer Chris Claremont, penciller Sal Buscema and inker Steve Leialoha, under a cover by Rich Buckler), except that the Widow thinks she's upstate school teacher, Nancy Rushman...and completely helpless against muggers attacking her (showing "No Way To Treat A Lady"), at least until Spider-Man stops them.  Trying to help her, she finds she has no memory other than the above, but, in looking for identification, they find the Widow's costume, which Spidey convinces her to put on (he says for warmth, but also hoping to jog her memory).  Then, the two are attacked by agents of S.H.I.E.L.D., with Spidey fighting them off, but getting injured, and "Nancy" displaying some combat abilities to save Spidey from the attacking agent, but not knowing how she knew how to fight.  The two are then confronted by Nick Fury, who shoots Black Widow, then Spidey...and asks the other S.H.I.E.L.D. agents to clean up the mess. 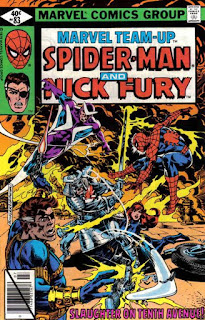 Spidey wakes up in Marvel Team-Up #83 (July, 1979), being happy there wasn't "A Slaughter On 10th Avenue", and proceeds to run down last issues events in this story by Claremont, Buscema and Leiahola.  It ends up being a team-up with Nick Fury, who had tranquilized Spidey (and the Widow), with Fury looking after the Black Widow at S.H.I.E.L.D. HQ (which Spidey finds, and takes Black Widow away from S.H.I.E.L.D).  Meanwhile, a mysterious woman gives Silver Samurai orders aboard the S.H.I.E.L.D Helicarrier, asking him to use his teleportation ring to bring Hulk's foe, the Boomerang, to them (Silver Samurai got that ring from John Belushi of Saturday Night Live in Marvel Team-Up #74 in October, 1978).  This leads to a confrontation between Spidey and Nick Fury (who was being followed by Boomerang and Silver Samurai), and Spidey, Fury and the still amnesiac Black Widow to team-up to find out the plans. 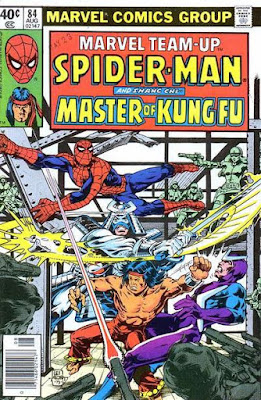 Those plans deepen in Marvel Team-Up #84 (August, 1979), where Shang-Chi (master of Kung Fu and son of Fu Manchu), shows up to help "Catch A Falling Hero" in the story by Claremont/Buscema/Leiahola, with the heroes finding out that it was Captain America foe, Madame Hydra (now calling herself the Viper) who was behind the brainwashing of S.H.I.E.L.D., and plans to use the Helicarrier to kill the President of the United States.  The heroes try to stop the assembled villains, and free the hypnotized crew, but the story ends with Spidey falling out of the flying Helicarrier... 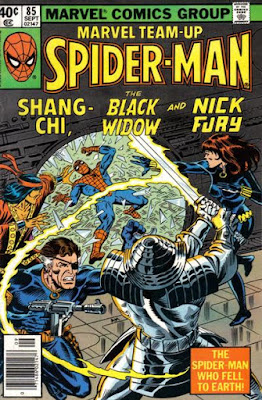 ...and into Marvel Team-Up #85 (September, 1979), dealing with his fall and "The Woman Who Never Was" in this story by Claremont/Buscema/Leialoha.  The combined heroes do battle with the villains, working to save the President and the hypnotized S.H.I.E.L.D. agents, and we learned Black Widow had been previously pursuing Viper, and learned of Viper's plans, but was unable to get to Nick Fury to warn him (and had to get to Nick, as Widow wasn't sure who she could trust).  Captured by Viper, Widow was able to escape, but the severe torture Black Widow endured regressed the heroine into an old cover identity she used when she originally began working for S.H.I.E.L.D.  The story ends with Nancy coming to terms with who she is, and planning to come back to being Natasha Romanoff. 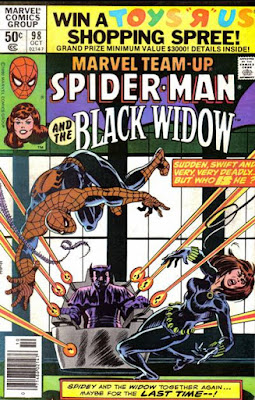 After that lengthy battle, it's time for a simpler team-up, and thankfully, Marvel Team-Up #98 (October, 1980), dealing with "The Fatal Attraction Of The Black Widow", in a story written by Marv Wolfman and Roger McKenzie, pencilled by Will Meugnoit and inked by Bruce Patterson, under a cover by Al Milgrom.

This time around, Spidey ends up working with the Black Widow and Simon Stroud (a C.I.A. agent, who faced monstrous Spider-Man foes, lycanthrope Man-Wolf and vampiric Morbius) to stop a smuggling ring...except that it was no average smuggling ring, instead, it was an operation run by Daredevil foe, the Owl, who had been injured in a battle with Spider-Man and Daredevil in Marvel Team-Up #73 (September, 1978), and is working the criminal mob of the  Maggia to plunge Manhattan into a blackout in return for the weaponized chair which now he needs for movement.  The heroes work against the Owl's henchmen, with Stroud taking down the Owl. 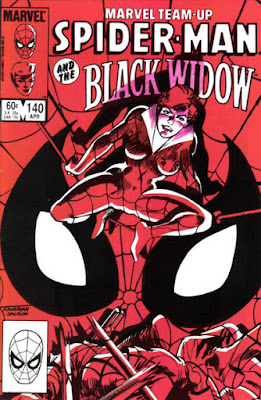 With their last team up, Spidey and the Black Widow get new looks.  True, Black Widow had just updated her costume in recent issues of Daredevil, and Spidey was still in the familiar red and blue for Marvel Team-Up #140 (April, 1984), the times were changing (though the title seems to hint at the fate planned for New York last time they met, with "Where Were You...When The Lights Went Out?", in this story written by Tom DeFalco and Bill Mantlo, pencilled by Ron Frenz and inked by Mike Esposito, under a cover by Ed Hannigan and Klaus Janson.

This time around, New York has rolling blackouts, with Spider-Man failing to stop a murder, yet the police think they have the murderer, but blind lawyer, Matt Murdock (secretly Daredevil), thinks the boy is innocent, and has Black Widow looking into the case, meeting up with Spider-Man...but, Spider-Man gets sucked into the Beyonder's teleportation device and heads into the Secret Wars! 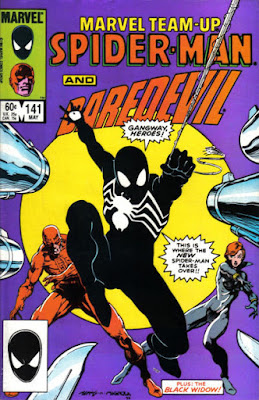 With Marvel Team-Up #141 (May, 1984), we see "Blind Justice" as Daredevil and Black Widow are dealing with the chaos brought about by the missing super-heroes...

...with Spider-Man returning to Earth in his new, black symbiote costume.  The heroes work together to find the real murder, with Daredevil making a deal with the Kingpin to find him in this tale by writers Tom DeFalco and Jim Owsley, pencilled by Greg Larocque and inked by Mike Esposito, under an Art Adams/Mike Mignola cover!

All this espionage can keep one busy.... 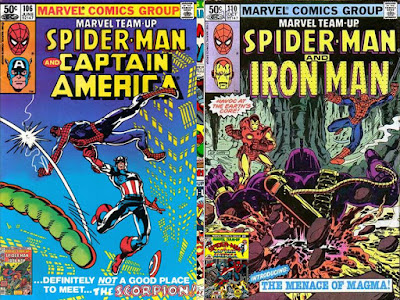 ....but looking forward to more straight forward team ups with Spidey and the Avengers soon!