Spider-Man Teams With Hawkeye And Ant-Man 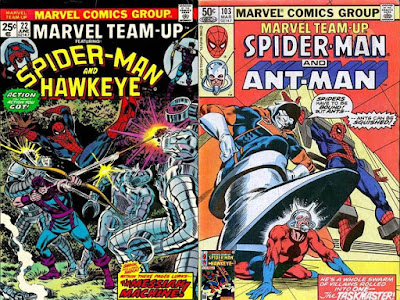 A little truth in advertising.  Spider-Man didn't team up with Hawkeye AND Ant-Man in any of the 150 issues of Marvel Team-Up, but he did team up with both heroes separately (and someone related to one of them)...

...so let's take a look back at those team ups, and let you decide how much you liked them.... 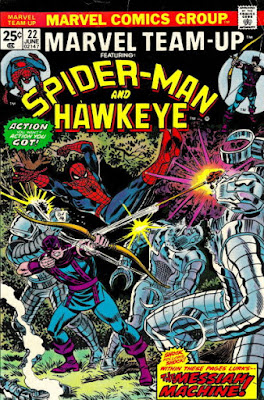 Spidey and Hawkeye had worked together before, but Hawkeye first showed up to work with Spider-Man in Marvel Team-Up #22 (June, 1974) where the two heroes faced off against "The Messiah Machine!" by writer Len Wein, penciller Sal Buscema and inkers Frank Giacoia and Dave Hunt.


Hawkeye had just left the Defenders (who he briefly worked for during the Avengers/Defenders War, having just left the Avengers before that), and called on Spidey for some help with a problem he had encountered, and following the thieves back to their HQ led the heroes to a confrontation with Fantastic Four/Silver Surfer foe, Quasimodo!  With a little of Hawkeye's archery daring-do, the heroes were able to stop the villain and go back to their normal lives. 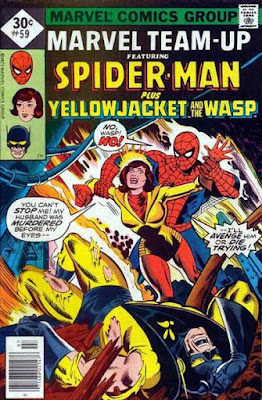 Spider-Man was expecting to encounter either the Human Torch or Iceman in Marvel Team Up #59 (July, 1977) by writer Chris Claremont, penciller John Byrne and inker Dave Hunt, as "Some Say Spidey Will Die By Fire...Some Say By Ice!".

Spider-Man thought he was attacked by the Human Torch and Iceman while swinging through the city (and was saved from drowning by Hank Pym, known then as Yellowjacket).  Hank took Spider-Man back to his apartment (with his wife, Janet Van Dyne, aka the Wasp, who was none to happy to have their romantic night ruined), but soon recounting the details, Spidey realizes it was the villain Equinox (whom the Torch and Iceman fought in an earlier issue of MTU), and the three heroes went in search of the villain, with potentially catastrophic results for Hank Pym to end the issue... 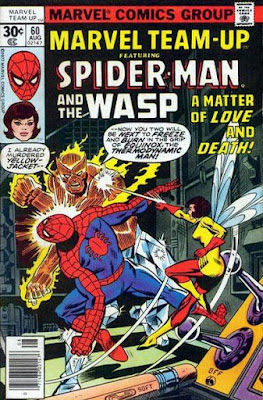 Thankfully, Marvel Team Up #60 (August, 1977) continued the tale of "A Matter of Love...and Death!" (also by Claremont, Byrne and Hunt), with Wasp a little upset that her husband was dead (and seemed to manifest new powers when she shrunk down).  As the heroes head to the Fantastic Four's Baxter Building (currently vacant, but able to access thanks to the Wasp's Avengers ID) with Margay Sorenson in tow (the scientist who created Equinox, and also his mother), and after defeating the Baxter Building's security, make a device to stop Equinox (and get a little help from Yellowjacket, who survived, and had not had a chance to tell his wife of improvements he made to her powers as Spidey's plight had interrupted them in the previous issue).  This also let into next issue's Spider-Man/Human Torch team-up...but that didn't involve the former Ant-Man or his wife....though it did involve someone else who could duplicate the Torch's powers! 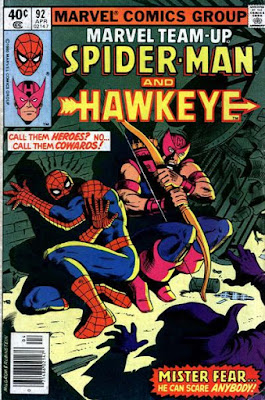 Marvel Team Up #92 (April, 1980) had Spidey and Hawkeye encounter "Fear"....well, Mr. Fear (a villain who had faced Daredevil before....and died a few times facing DD....yet someone new always picked up the mantle, as it happened in this story, written by Steven Grant, pencilled by Carmine Infantino and inked by Pablo Marcos).

This story starts out with Hawkeye attacking Spidey, not wanting to let Spidey hurt him.  After soon dealing with an unconscious, overworked Hawkeye, Spidey talks to the former Avenger, who was now working for Cross Technological Enterprises as security chief, he encountered thieves, including the new Mr. Fear, who dosed Hawkeye with his fear gas.  The two heroes face their fears and Mr. Fear, eventually defeating the villain after they realize that there are emotions more powerful than fear.... 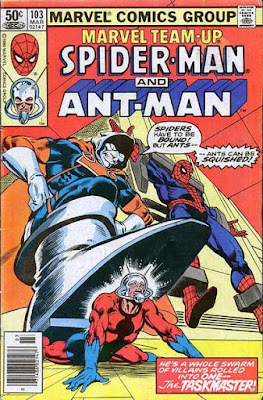 All this, and still no Ant-Man?  Well, new Ant-Man, Scott Lang, showed up to meet Spider-Man in Marvel Team Up #103 (March, 1981) where the two heroes faced off against the villain with the photographic reflexes, the Taskmaster, and his business, "The Assassin Academy!" by writer David Michelinie, penciller Jerry Bingham and inker Mike Esposito.

This time around, Ant-Man was busy fixing his daughter's ROM doll (but had to do it under cover, as Cassie didn't know her dad was Ant-Man), when he has an old friend of is approach him to help him find work (as someone recruits ex-cons to pull jobs, and pays for success or failure).  Since Scott gave up that life, he declines, but gets involved when he reads in the Daily Bugle his friend had died the night after approaching him.  Peter Parker is also snooping around, looking for photos to sell to J. Jonah Jameson...and the two heroes encounter the Taskmaster, and his newest scheme to train the criminal element.  Spidey and Ant-Man do defeat Taskmaster (who uses skills learned from watching Daredevil and Hawkeye against the two heroes), mostly by Ant-Man using his own powers in an unexpected way (that of enlarging an ant to attack), but while the heroes stopped the villain's plans, Taskmaster got away. 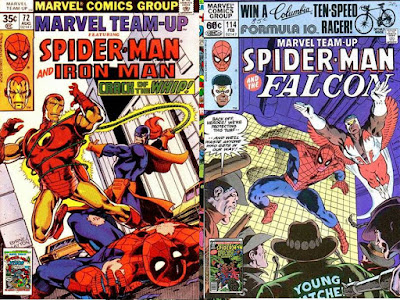 As Taskmaster duplicated Hawkeye, it was almost like having Spidey, Ant-Man and Hawkeye in an issue, and there are more related Spider-Man and Avenger member team-ups to come!