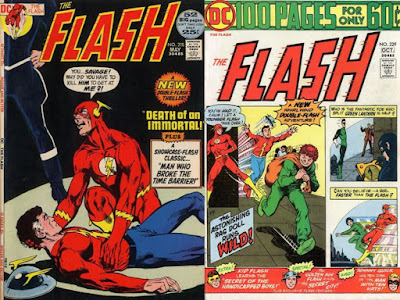 Flash had gotten away from his team-ups with his alternate Earth friend for a while, but that changed with a few tales....

A look at a couple of team-ups of Flashes Barry Allen (from Earth-1) and Jay Garrick (from Earth-2), featuring Golden Age villains like Vandal Savage and Rag Doll (plus one or so.....).

Death Of An Immortal 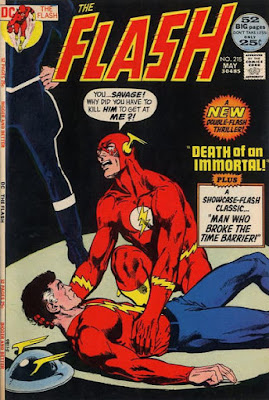 Barry and Jay have their first team up since the pair worked with their other similar named JLA/JSA members against Solomon Grundy, in Flash #215 (May, 1972) by Len Wein, Irv Novick, Frank McLaughlin and Dick Giordano, under an emotional cover by Neal Adams and Dick Giordano.


The team up does being with a little confusion... 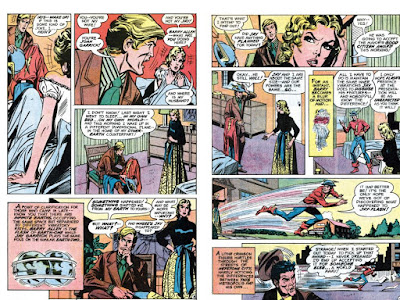 ...as Barry wakes up thinking that he is getting ready for a medal ceremony for the Flash in Central City (Earth-1), but finds he's really in Keystone City (Earth-2), as Jay's wife Joan gets to explain, much to both of their surprise as Barry has woken up in Jay's bedroom!


Nothing illicit going on, just a little multiple Earth confusion.  Jay was suppose to get an award as the Flash from Keystone City, but he's missing....so, Barry jumps in Jay's costume to take his place, hoping to spot someone that will be surprised that he is there.  That doesn't pan out, and on his way to his next idea, Barry saves an old man from an out of control truck...who surprises Barry by letting him know that he isn't the Flash (of Earth-2). 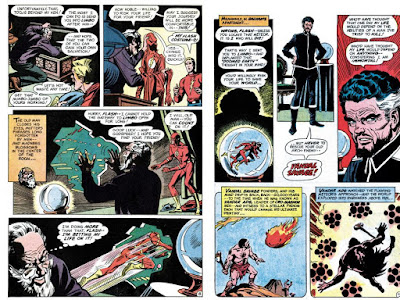 The old man, Dalvan, takes him to his fortune telling business, where he reveals to Barry that he knows Jay is trapped in limbo, and, giving Barry his own uniform, opens up a doorway to limbo for him.  In Limbo, Barry finds Jay, who says he is there to track down a meteor, which, if he doesn't find and return to Earth-2, his world will die.

But, what about the old man?  He wasn't what he appeared to be....he was Vandal Savage!  The immortal villain found out that he wasn't as immortal as he thought, and needed to be exposed to the meteor again to keep his life going, and sent Jay into Limbo to retrieve it, yet found the powers of one speedster wouldn't be enough, so came up with this plan to get it, using items he got from his fellow Injustice Society of the World members. 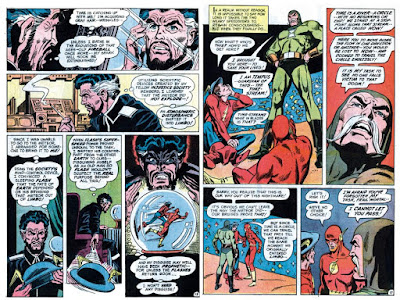 The Flashes found the meteor and used their super speed backdraft to send it where it is needed, but, nearly kill themselves, only to be saved when they encounter Tempus, the Guardian of the Time Stream.  Tempus blocks them from going back to the time when Limbo opened to let them in (as they figure that is also their way out).

They defeat Tempus, and work their way through other time hurdles to leave Limbo after passing through the End of Time, and back to where they entered (finding out of Vandal Savage's role as they go).  The meteor shows up and Vandal is there for it to strike him....and both disappear! 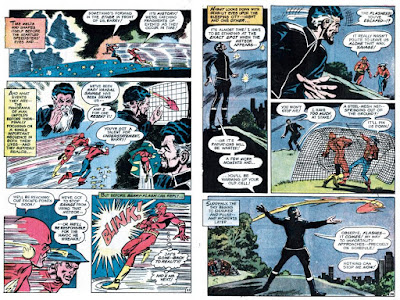 Did time catch up to Vandal Savage?

Jay returns next in the 11th JLA/JSA team-up, that introduces the Freedom Fighters, with his wife Joan having last appeared in a Jay Garrick solo tale in Flash #201 (November, 1970) and appearing next in the next Flash team-up...and villain Vandal Savage was last in the Flash team-up that revived the JSA, and appears next in an upcoming Flash team-up to be covered later. 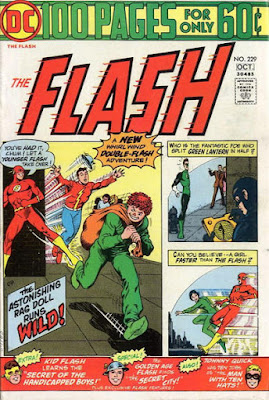 Before Vandal Savage returns, time to check in on another of Jay's old foes, Rag Doll, in Flash #229 (September-October, 1974) by Cary Bates, Irv Novick and Frank McLaughlin, all under a cover by Nick Cardy.


Barry Allen decides to have lunch with an old friend's wife...


Along the way, he stops a break in at the Central City Community Center (the place where Barry first went to Earth-2), quickly dispatching the Walton Gang, and heads off to the alternate Earth. 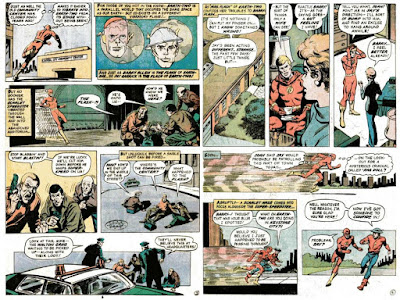 Joan confides in Barry that she has seen something wrong lately in Jay.  Barry goes off to find him, with Jay in action as the Flash, looking for an old foe of his, the Rag Doll, on a new crime spree, stealing old dolls.  Jay had trouble catching this old foe, and was concerned about it, as Rag Doll should have no additional tricks other than being a contortionist.  Jay is worried he is losing a step, so Barry helps out, and, with a little extra effort, Barry helps Jay beat Rag Doll. 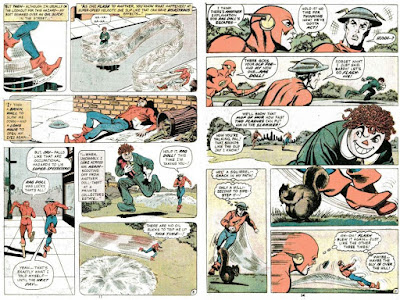 Barry sees an odd energy around both Rag Doll and Jay-Flash's head, and wonders what that means.  While interrogating Rag Doll at police headquarters, Rag Doll puts on his mask...and becomes a real rag doll?  How did he pull off that trick?   Jay and Barry call it a day, with Barry going back home...or did he?  Barry came back to find the Thinker, the mastermind who had manipulated Rag Doll's return, and Jay's mistakes, using his Thinking Cap. 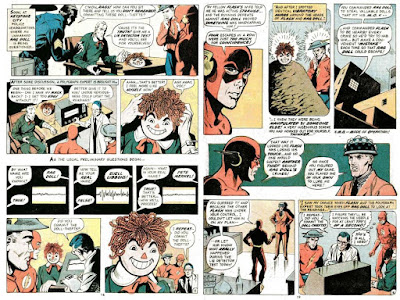 So, Barry came up with his own plan, switching out Peter Merkel for a real Rag Doll to confuse the Thinker, which worked, or would have had the Thinker not been able to shock Barry Allen.  Thankfully, Jay showed up to take on the Thinker, his confidence now better, and defeated the villain with a little helmet switch of his own.  Barry returned to his home, and explained to Iris that he faked being duped by the Thinker, so Jay could defeat him to get his confidence back! 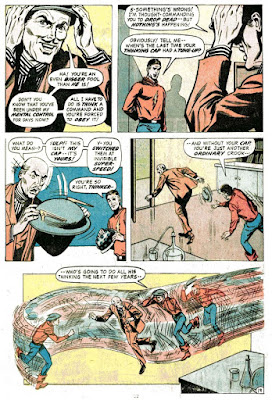 Jay was last in the 12th JLA/JSA team-up featuring Sandman and Sandy, Rag Doll makes only his second appearance here (after Flash Comics #36) to return with the Secret Society of Super-Villains in a later JLA/JSA battle, and the Thinker, without his snazzy purple costume he got fighting the two Atoms, returns with the Injustice Society of the World to face the JSA with Power Girl in their return in All-Star Comics in the mid-1970s.  The issue also has reprints, including some of the Golden Age Flash and Johnny Quick!

Something to think on over time....and more alternate Earth teams to follow in the future!