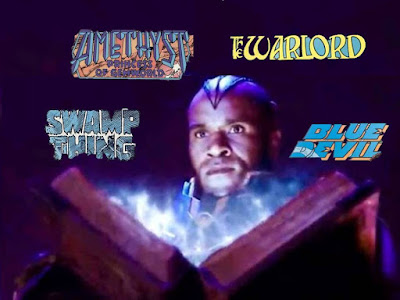 Taking a supernatural turn, the Monitor and Lyla continue their investigation of all things in the DC Universe, this time exploring the magic contained within the multiverse.....

....with a look far and wide, going from the Hollywood hijinks of the Blue Devil, to the swamps of Louisiana, to the far off realm of Gemworld, and even deep into the Earth and the hidden land of Skartaris. 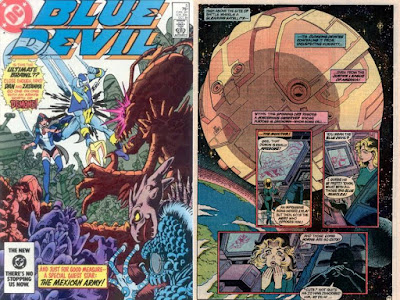 First up is Blue Devil #5 (October, 1984) by Gary Cohn, Dan Mishkin, Paris Cullins and Gary Martin.  Dan Cassidy, the stuntman who was bonded into his mechanical suit by magic, becoming the hero known as Blue Devil, was facing the forces of the demon, Nebiros, with help from the JLA's Zatanna, all as the Monitor and Lyla watched their progress.

A Halo Of Flies Next up, is Saga Of The Swamp Thing #30 (November, 1984) by Alan Moore, Steve Bissette and Alfredo Alcala, where Swamp Thing had ended a confrontation with old Atom foe, the Floronic Man/Jason Woodrue, as Jason was beginning to tap into the Green, the source of power for protector of the Bayou (with Monitor and the future Harbinger observing as even the Joker found these proceedings not worth a laugh).  The Monitor begins to show the depth of what he watches here....and the evil that was growing in Louisiana was getting worse, with Swamp Thing and Abby Arcane in the middle of it, with Matt Cable, or was he? 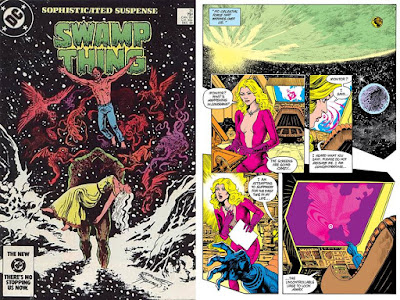 Continuing with Swamp Thing, from Saga Of The Swamp Thing #31 (December, 1984) by Alan Moore, Rick Veitch and John Totleben, wherein the Monitor and Lyla watch the returned Anton Arcane (mystic foe of Swamp Thing and uncle of Abby Arcane, Swamp Thing's love), and all the horror that is unleashed at this time.

Both Swamp Thing stories has seen many reprints, most recently in both hardcover and softcover, in volume 2 of the Saga Of the Swamp Thing collections. 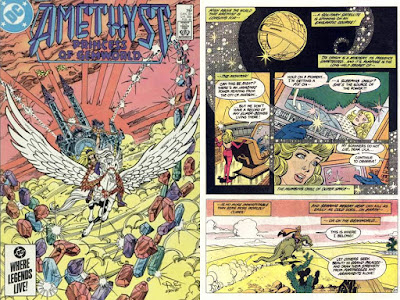 Taking a slightly different look, Monitor and Lyla peer into the doings of Amethyst, young Amy Winston who was really a princess of the other world known as Gemworld in Amethyst #2 (February, 1985) by Dan Mishkin, Gary Cohn, Ric Estrada and Romeo Tanghal, under a cover by Paris Cullins and Ernie Colon.


This story has only been reprinted in black and white in the Showcase Presents: Amethyst, Princess Of Gemworld.

Demons Of Days Past 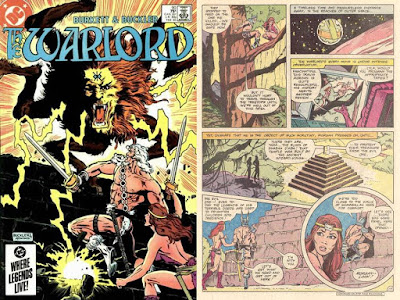 This time around, Monitor and Lyla looking into the lost world of Skartaris, in Warlord #90 (February, 1985) by Cary Burkett and Rich Buckler, with a cover by Rich Buckler and Dan Adkins.  They observe Travis Morgan, a USAF pilot who landed in this land in the center of the Earth, and a little of his battles with the primitive and sometimes supernatural forces that live there along with the woman he loves, native Tara.

This story establishes the Warlord as a part of the DC Universe, which Warlord creator Mike Grell would detest, even though later, Mike Grell did team Travis Morgan with Green Arrow in two issues of Green Arrow, after the Crisis On Infinite Earths. 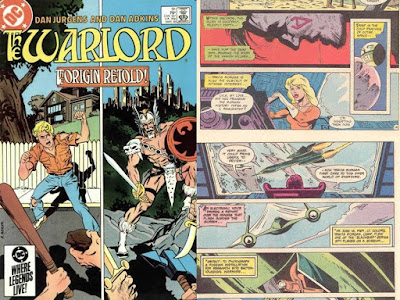 Last but not least this time around is Warlord #91 (March, 1985) by Cary Burkett, Dan Jurgens and Dan Adkins, with a cover by Rich Buckler.  The Monitor and Lyla look into the past of the Warlord and his daughter, Jennifer, as he prepares for a desperate battle.


Neither of the two Warlord tales have been reprinted. 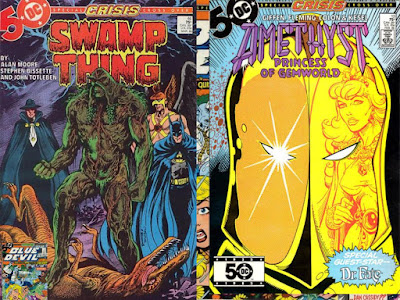 Still many lands and times to be explored in the DC Universe, as Monitor and Lyla will continue to serve as our guides for now (as they had already taken a look at Wonder Woman's Paradise Island)....taking us to see the Justice Society of America, as well as Jonah Hex, Superman, Batman and the Outsiders and more, all as these heroes were being prepared for the Crisis On Infinite Earths!