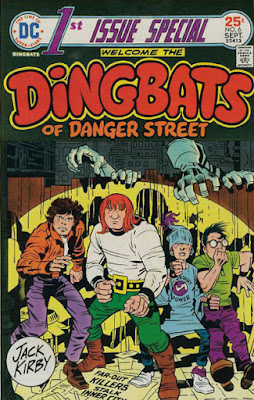 One of the last things that Jack Kirby created for DC Comics was the Dingbats of Danger Street, a variation of a kid gang (like his Boy Commandos and Newsboy Legion), this concept sat around for a bit, with the team's introduction making it into First Issue Special #6 (September, 1975)...

...with their leader, Good Looks; strongman Krunch; eager and hungry Non-Fat and oddball Bananas, these boys lived in a rundown neighborhood depending on each other to survive as adults had done them wrong.

In this appearance, the boys fought against Jumpin' Jack and the Gasser (two near super-villains), unintentionally helping Lt. Terry Mullins capture the crooks (who had kidnapped an executive), and like all First Issue Specials, promising at the end that if enough readers buy this and write in, more adventures will follow.... 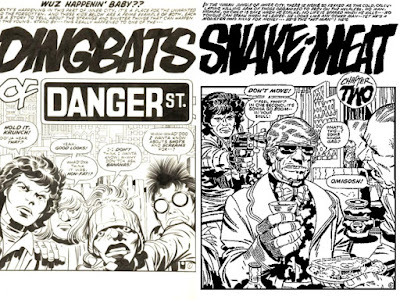 Unlikely that more adventures would follow, as at the time this was published, Jack Kirby was getting ready to move back to Marvel, Twomorrows' Jack Kirby Collector does confirm that there were two more issues of the Dingbats created by the King...likely only to see the light of day there, with a sample here. 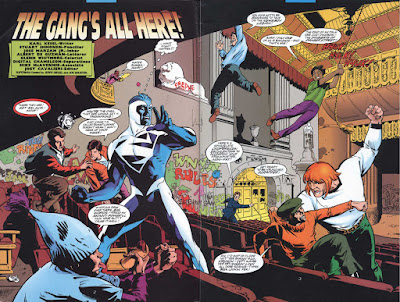 Still, nothing is totally forgotten, and the boys do have cameos in Hero Hotline #6 (September, 1989) and Adventures Of Superman #521 (March, 1995), before a return in Adventures Of Superman #549 (August, 1997, by Karl Kesel, Stuart Immonen and Jose Marzan Jr.), facing off against the electric blue Superman, as well as the Newsboy Legion (and finally finding a place to live, with a little help from another First Issue Special one-shot alumni, the Green Team,  yet another group of youths, who buy their mates a home!). 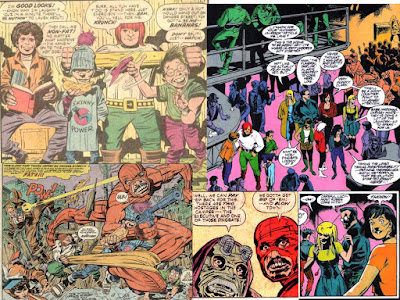 Best of all, the Dingbats first appearance can be found, reprinted in the Jack Kirby Omnibus #2 of May, 2013, along with the first appearance of Atlas and Manhunter from their First Issue Specials, the Sandman revival of the '70s Kobra and more!

Posted by Dave's Not Here Comic Blog at 4:35 AM