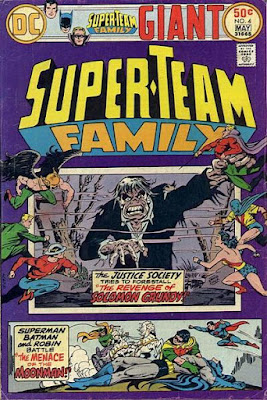 Looking back at the classic collection of stories in Super-Team Family #4 (April-May, 1976), with stories featuring the Justice Society of America and the World's Finest team of Superman, Batman and Robin....

...all under a cover by Ernie Chan, in a return to all reprints in the book (after issues #2 and #3 had new stories as well as reprints), with a new editor, E. Nelson Bridwell. 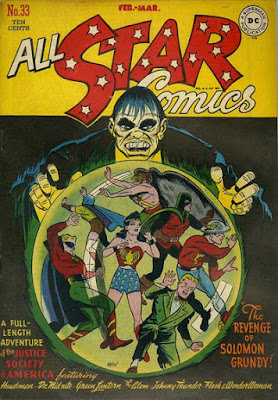 Grundy was an animated corpse (formerly the man known as Cyrus Gold), that came from Slaughter Swamp in Gotham City (and facing the Golden Age Green Lantern twice before this).  Freed from the power ring bubble Green Lantern had trapped him in, Solomon Grundy went to find the emerald gladiator.  The JSA went to their meeting house, finding Green Lantern missing, so went to find him...with Hawkman, Dr. Mid-Nite, Flash, and Atom facing Solomon Grundy (and Johnny Thunder meeting a phony Grundy, with Wonder Woman playing secretary, but likely able to take out Grundy herself), eventually reuniting to stop Grundy and saving Green Lantern, who then exiled Solomon Grundy to the moon... 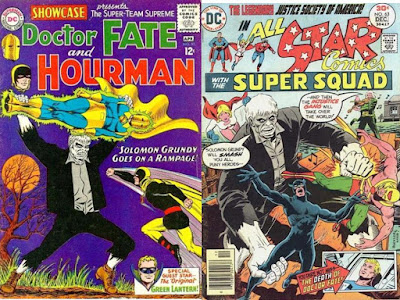 ....who returned one time after that in the Golden Age, in Comic Cavalcade, to face Green Lantern, before his Silver Age revival, facing Dr. Fate and Hourman along with Green Lantern), with the JSA being featured in a revival of All-Star Comics at this time (including a grown up Robin, the Star-Spangled Kid and Power Girl as members, and Grundy joining the Injustice Society of the World soon after this reprint appearance). 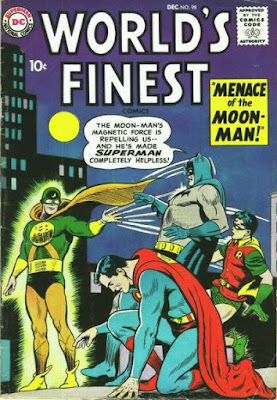 Since the Justice Society story was so large, there was only room for one more reprint, that of World's Finest Comics #98 (December, 1958) by Bill Finger, Dick Sprang and Stan Kaye, with "The Menace Of The Moonman".

The story focuses on an astronaut, Brice Rogers, who is exposed to the radiation of a green comet, that, when he returns to Earth, turns into the Moon Man under the moonlight.  Superman faces him (but that green radiation must have contained Kryptonite, as Superman is weakened), but the Moon Man reverts to Rogers, with criminals trying to use his new identity to their advantage, until Superman, Batman and Robin defeat them, and Rogers' Moon Man power fade away....but he does return, with a new person, Lady Lunar exhibiting those powers.
Posted by Dave's Not Here Comic Blog at 4:00 AM