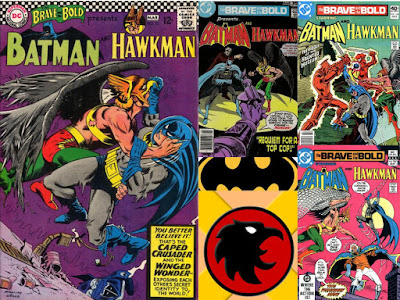 By the time of his team-ups in Brave and the Bold, Batman was tied more to Gotham and fighting human criminals, but, on the other hand, Hawkman was a Thanagarian police officer, observing Earth police habits with his partner (and wife, Hawkgirl)...


...so of course, these two characters would work together.... 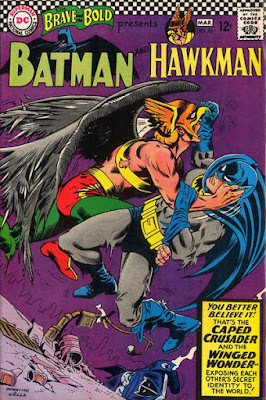 The first team up of these heroes happened in Brave and the Bold #70 (February-March, 1967) with "Cancelled: 2 Super-Heroes" by Bob Haney, Johnny Craig and Charles Cuidera, under a cover by Carmine Infantino and Joe Giella.

Batman had to stop millionaire collector, Balthazar T. Balthazar, from figuring out that he is really Bruce Wayne, so he recruited Hawkman to help throw him off the trail (but, along the way, the collector things Carter Hall is Batman, with the two heroes battling, then eventually defeating their foe....and giving him other identities for him to believe in other than their real ones).

Sadly, this issue has only been reprinted in black and white, in Showcase Presents (both in Batman Team-Ups and Hawkman's volumes). 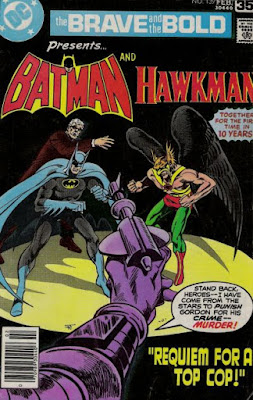 Next up is Brave and the Bold #139 (January-February, 1978) by Bob Haney and Jim Aparo, where Hawkman gets to meet Commissioner James Gordon, in "Requiem For A Top Cop".

This time around, Hawkman has to help protect Jim Gordon from an alien bounty hunter, Vorgon,  who is after Gordon for a crime he committed as a young police officer in Gotham, that of killing an alien named Lan who landed on Earth!  Batman and Hawkman aren't able to stop the hunter, but Gordon is, with the truth of the accident that lead to the alien's death.


This story was reprinted in glorious color in Legends of the Dark Knight: Jim Aparo Volume 2 hardcover of 2013. 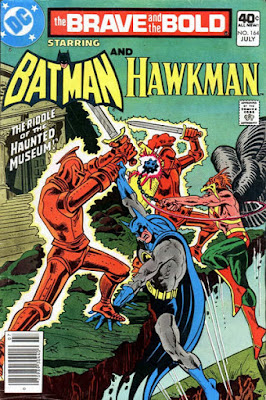 "The Mystery Of The Mobile Museum" is the next solo Batman/Hawkman team-up in Brave and the Bold #164 (July, 1980), by J.M. DeMatties, Jose Luis Garcia-Lopez and Steve Mitchell, with a cover by Jim Aparo.

Carter and Shiera Hall had a lot to deal with being Thanagarian policemen, JLA members and curators of the Midway Museum....but being curators of the museum got a lot harder when the museum decided it didn't want to be on land anymore, and tried to fly away.  Batman and Hawkman had to stop the Ma-Prusha, who were making this happen (as well as animating armor and other items to stop the heroes from stopping them).

This tale was reprinted along with a series from Batman: Confidential featuring King Tut, in the Batman: King Tut's Tomb collection of 2010. 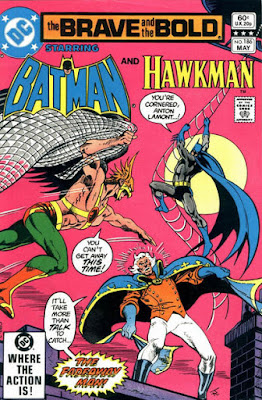 Last, but not least, is Brave and the Bold #186 (May, 1982), where Batman and Hawkman have to deal with "The Treasure Of The Hawk-God's Tomb" by Dan Mishkin, Gary Cohn and Jim Aparo.

Batman and Hawkman try to recover a stolen Horus sarcophagus, searching Gotham City, and finding Hawkman's foe, the Fadeaway Man (Anton Lamont, who uses the Cloak of Cagliostro to teleport, become invisible or intangible in his pursuit of items to steal), being the one responsible for its theft....after first dealing with the Gotham underworld (whom the villain tried to sell a fake to), then capturing the thief on a second try (and recovering the real booty, along with the villain).

Sadly, this tale has yet to be reprinted.

But these tales do prove that Batman and Hawkman can work together!
Posted by Dave's Not Here Comic Blog at 4:33 AM