Kobra One Plus One 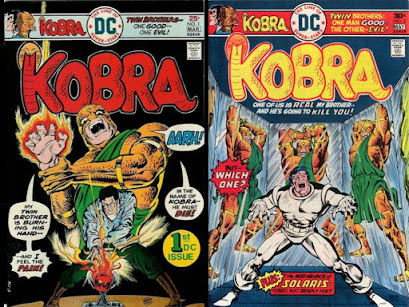 As Jack Kirby left DC in the 1970s, he left them a little present with an inventory story (co-plotted by Steve Sherman)....which was modified by writer Marty Pasko (who put in his own words over Kirby's) and some art changes in the first issue by artist Pablo Marcos...that of Kobra (originally planned to be King Kobra, but don't want to put on airs!).
Here's a look at the first two issues of the Kobra series....

Fangs Of The Kobra 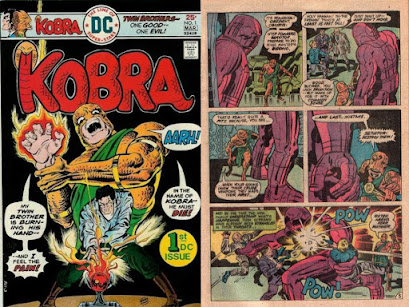 The saga begins in Kobra #1 (February-March, 1976, with cover by Ernie Chan, story by Pasko, plot and pencils by Kirby with Sherman plot assist, inks by D. Bruce Berry, and modifications and additional inks by Marcos), with hitman Horst Buchner and associates descending into the lair of the Cobra Cult in the bowels of Manhattan, where they meet the cult leader, Kobra, where Kobra shows his wares, such as a shrunken Mastodon from Atlantis and a giant alien robot Servitor....which he uses to kill Buchner and his men for their treachery. 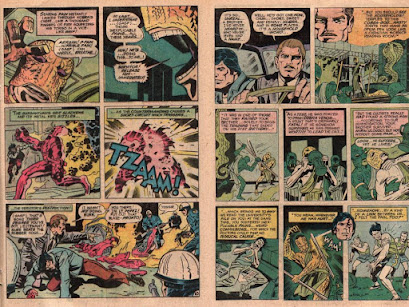 Instead of using Horst to kill Jason Burr, Kobra sends the Servitor after him.  Meanwhile, at the college cafeteria, Lt. Perez of a special NYPD task force is talking to 23 year old Jason Burr, informing Burr that he needs his help...as the Servitor attacks Burr,  but the pain his crushing grip causes Jason makes Kobra stop the attack (which, along with a shot from Perez) causes the robot to self-destruct.
Lt. Perez continues his plea with Jason...informing him that Kobra is Jason's twin brother (taken from the hospital where they born in New Delhi by the Cobra Cult, destined to become their leader). 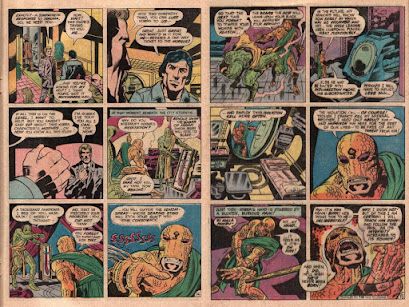 The Cult trained unnamed Burr over the years (with injuries gotten by one shared by the other via a sympathetic bond between the two which had them sharing feelings).    Kobra, now realizing he cannot kill Jason, plans to put him in an isolation room, as Jason forces a meeting between the two by burning his own hand....and, at the meeting, Perez and his men try to kill Kobra.  Kobra escapes via his flying Kobra Ark, and Jason deals with his new life. 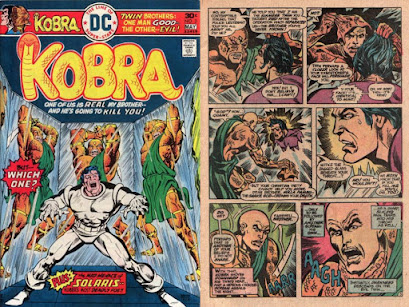 Kobra #2 (April-May, 1976) sports another Ernie Chan cover, with interiors by Martin Pasko, Chic Stone and Pablo Marcos.  The issue begins with a dream confrontation between Jason and Kobra, with Kobra killing Jason (and himself) in a mirrored combat room.  Awakening at Merrill Hall campus housing, Jason is comforted by his girlfriend, Melissa.
Kobra awakens in his Ark, having had the same dream as Jason, and feels the comfort Melissa is giving Jason (with Kobra having ties to her and a look-a-like named Natalie whom he loved, who had died). 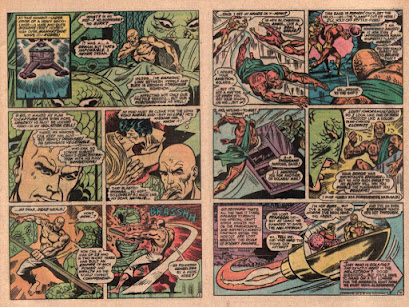 But, Kobra's reflection ends as he must deal with Solaris, a villain trying to steal the Heliotron from a lab at the New York Fairgrounds.  The Cobra Cult fights Solaris' men as Kobra faces Solaris, with Solaris getting away with the Heliotron due to an incompetent Cobra Cult member.  Meanwhile, Jason fills in Melissa about recent events (all from the last issue) as Lt. Perez arrives to enlist Jason's help.
Back at his Manhattan base, Kobra tortures his failing lackey in the isolation chamber.  Back at Jason's dorm, Perez apologizes for the attempt to kill Kobra, and explains that Kobra is after Solaris' Heliotron (Solaris having been a NASA engineer who created the Heliotron, a solar based devise that could advance age in a person). 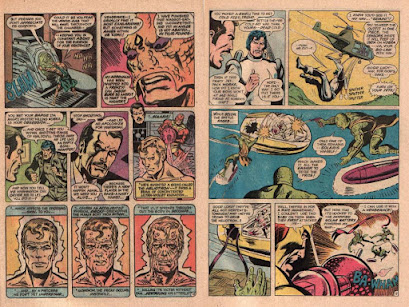 Solaris plans on using it to blackmail New York, threatening to unleash the device on Long Island, but Perez asks Jason to help, even giving him a super suit to help (though Jason doesn't take to the code name of Gemini).  As Solaris and Kobra battle in the skies over Long Island, Perez bring Jason to lure Kobra out of his Ark, which he does by going out in his flying super suit....right towards the beam of the Heliotron beam....which Kobra must save Jason from.  Kobra comes out of the ship to save Jason, but the beam strikes Jason's jet pack, and the two plummet to the ground.... 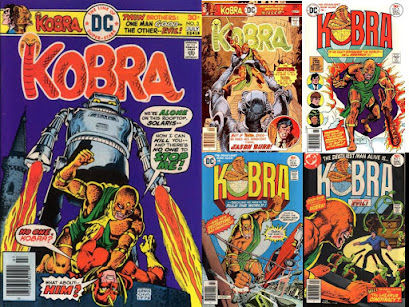 ....a heck of cliffhanger to end on, but perhaps there will be more Kobra "Koverage" coming in the future, as this seven issue series from Conway's Corner (having had a first issue planned to be in First Issue Special three times, but instead got its own title).
Posted by Dave's Not Here Comic Blog at 8:00 AM