Batman Vs The Atomic Man 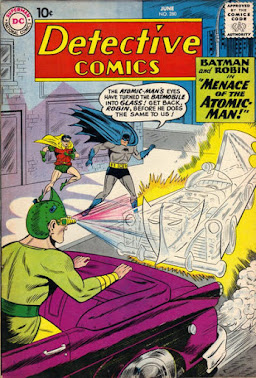 ...and, the Batman comics of the time reflected society's thoughts, but none moreso than an early 1960s issue of Detective Comics, wherein Batman faced the Atomic-Man!

The Menace Of The Atomic Man 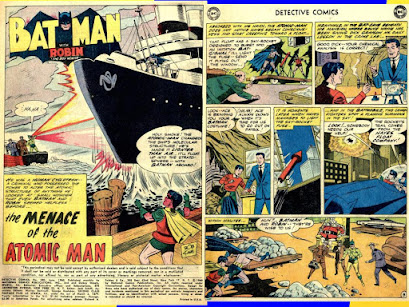 In Detective Comics #280 (June, 1960 with no identified writer, but art by Sheldon Moldoff and Charles Paris, and cover by Moldoff), The story begins with the Atomic-Man taking out the float business of Henry Hayes, who calls in Batman and Robin to help save him. 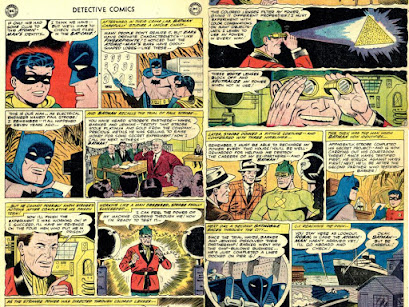 Batman, using the distinct features of Atomic-Man's ears, places him as Paul Strobe, an engineer Batman put in jail seven years ago as he defrauded Hayes, and his partners Barker and Jenkins.  Strobe vowed revenge, and invented his atomic goggles which allowed him to transmute items by staring at them (but his goggles only worked for two hours before needing recharging).

With this knowledge, Batman and Robin went to protect Barker's business (now a shipping mogul).  Sadly, that did not go well, with Batman having to make a daring escape from the now floating ship (that Atomic-Man had made lighter than air). 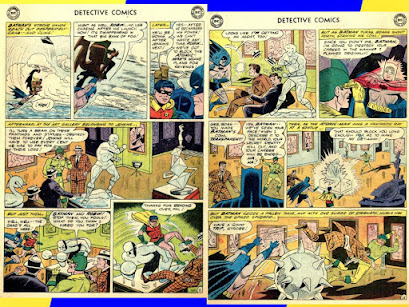 Still, trying again, Batman and Robin confronted Atomic-Man as he attempted to destroy the art of Jenkins, moving up Atomic-Man's timetable, turning Batman's cowl to glass to expose his identity.  Batman still stopped the Atomic-Man, and removed his helmet once its two hours of power was up.  Feeling he at least revealed Batman's identity, Batman corrected him, as Batman said he had seen Strobe turn other things to glass, so was wearing make up to hide his own identity! 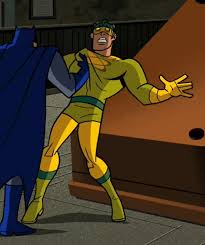 Usual story for that era of Batman
(filled with invasions and transformations, but, amazingly, Atomic-Man didn't make another regular comic appearance (unlike many of these obscure Batman villains, who at least made it to Batman's Lego Movie, though he did make it into Batman: The Brave and the Bold cartoon, in "A Bat Divided!").

Posted by Dave's Not Here Comic Blog at 1:00 PM