"I shall strike fear into men's hearts, using my image as a bat, striking in the night....at least after I've had my nap." 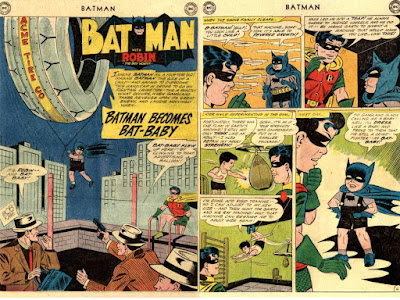 In a story by Bill Finger, Sheldon Moldoff and Charles Paris, Batman and Robin are recovering jewels from a heist by Nails Finney.  The Dynamic Duo bust into the deserted warehouse that the hoods are using, to find renegade scientist Garth there as well...who baths Batman in a strange energy beam, that reduces his age to that of a baby!  With the gang releasing a photo of Batman in this predicament, Batman trains to use his new stature as Bat-Baby to his advantage, tracking down Garth and the machine, and reversing the strange transformation. 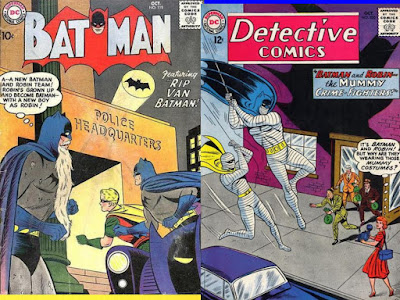 This early 1960s tale was a throwback to the 1950s, a time when Batman experienced a few odd transformations, like getting old, or being a mummy (though that last one was in the pre-New Look days too, as well as a few more, in both Batman and Detective Comics).