Strange Adventures Of The Astro Heads 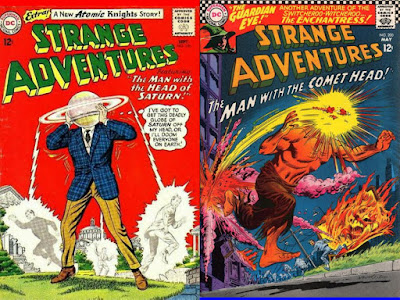 Ever had a day where you have a headache that makes your head feel larger than the moon?


Well, there were a few men in the pages of Strange Adventures who had even worse days than that!


The Man With The Head Of Saturn 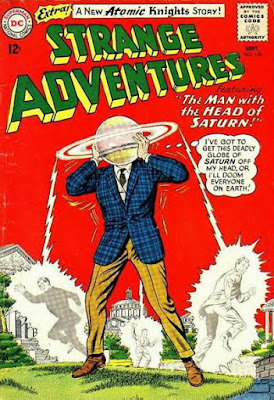 Bill Smathers was the man having a strange day in Strange Adventures #156 (September, 1963) under a cover by Murphy Anderson, with a story by Gardner Fox and Sid Greene.


A globe appeared on the head of a scientist, Professtor Bill Smithers, and then teleported him and some of his Korean War Veteran friends to Saturn, so that they could fight in an interplanetary war at the behest of Kandare Ohl, who came up with the device that brought them to the ringed planet.


Better still, the back up story in this issue was a tale of the Atomic Knights!

The Man With The Comet Head 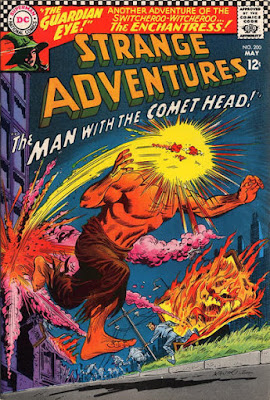 Alton Wright was the star of the cover story of Strange Adventures #200 (May, 1967), with that cover provided by Carmine Infantino and George Roussos, and story by Otto Binder and Jack Sparling.


This time it was an astronomer, Alton Wright, who was bombarded by strange rays from a comet from outer space that turned his head into a comet.


This issue also contained the third of three stories which featured the Enchantress (before she joined the Suicide Squad)!
Posted by Dave's Not Here Comic Blog at 4:00 AM