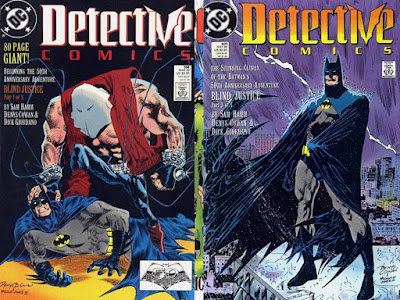 Continuing on, and starting to rack up numbers for the Darknight Detective, a look back at a few very special issues of Detective Comics.... 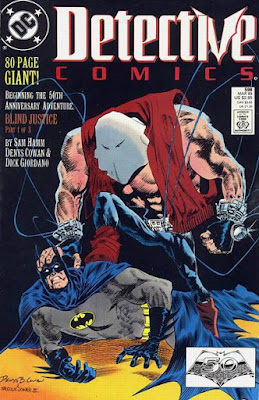 Starting up the run of three issues is Detective Comics #598 (March, 1989), with the first part of the story of "Blind Justice" by Sam Hamm, Denys Cowan, Dick Giordano and cover by Denys Cowan and Malcolm Jones III, which will lead up to #600!

Bruce Wayne finds himself deeply depressed about his mission as Batman, when he stops a villain that's a Bonecrusher (called such because of his use of sonic weapons that crush a person's bones inside of them) but that villain kills himself rather than be caught.  Meanwhile, Jeanne Bowen comes to Waynetech looking for her brother, Roy Kane, and is told by Director of Research Mitchell Riordan that Roy never worked there.  Jeanne gets in touch with Bruce, and the pair find that Roy did work there. 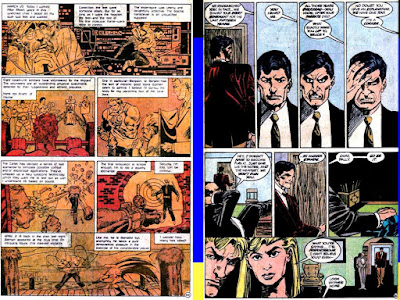 Batman then fights Bonecrusher, who again kills himself instead of being caught, while a homeless man acts out Bonecrusher's fight until caught.  Batman investigates to find out the homeless man is...Roy Kane, and reunites him with his sister (though Roy is amnesiac).  After another confrontation with another Bonecrusher (Alfred taking him out with a tranquilizer), Bruce goes to confront Riordan, who tells Bruce that he runs a secret empire within Waynetech, and a Dr. Kenneth Harbinger has been running the Bonecrusher bodies (via a mind switching device), with Bruce implicated in all the illegal activities (of experiments on homeless men, as well as what happen to Roy Kane).  Riordan also threatens Bruce about his secret, from all the traveling he did as a youth.  After Bruce doesn't stop, Riordan reveals Bruce's secret to the police...that Wayne is a Communist Spy! 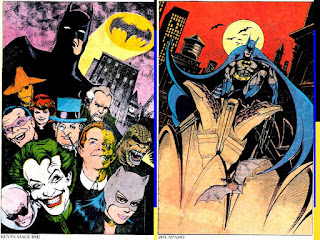 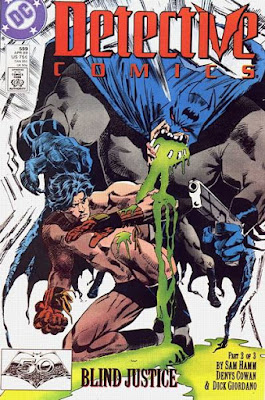 The second part of "Blind Justice", Detective Comics #599 (April, 1989, by Hamm, Cowan, Giordano and McLaughlin, and cover by Cowan and Jones III), is the only normal sized issue of the three, but it covers a lot of ground.

Bruce Wayne is dealing with the accusations of being a Communist spy (brought by Riordan and his secret cartel within Waynetech).  Really, Bruce was training to be Batman, but learned from nefarious types, like Chu Chin Li of the Chinese Mafia, Tsunetomo of the Yakuza and French assassin Henri Ducard.  Riordan tries to continue with the mind transfer process, but can't as Harbinger was found dead, Roy and Jeanne get use to life at Wayne Manor, and Harbinger, in a new body, begins to kill witnesses who might find him, including shooting Bruce Wayne! 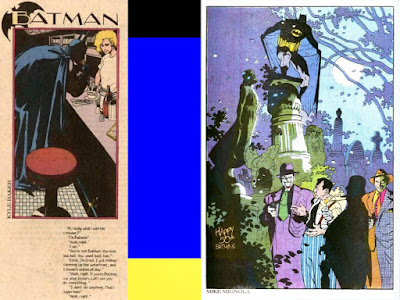 This issue has a few extras as well... 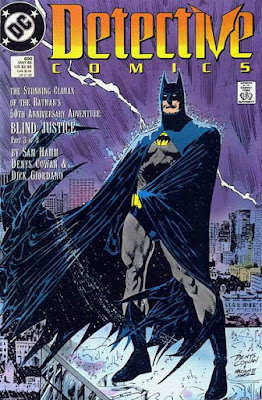 The third and final part of "Blind Justice", Detective Comics #600 (May, 1989 by Hamm, Cowan, Giordano and McLaughlin, and cover by Cowan and Jones III) has to wrap up all the craziness, and has extra pages to do it!

Bruce Wayne, now paralyzed and recovering from being shot, also has to deal with Ducard returning (now hired by Riordan to testify against Bruce in his upcoming trial).  Gordon keeps waiting for Batman.  Bruce, sent home to Wayne Manor, is still rattled, and Roy Kane finds him and Alfred in the Batcave, figuring out Bruce is Batman.  Kane wants to help, offering his body for Bruce to use (as he is set up on the body switching network of Harbinger's).  Bruce does this, convincing most of Gotham that Batman is back (but not Ducard, who is now more convinced Bruce is Batman). 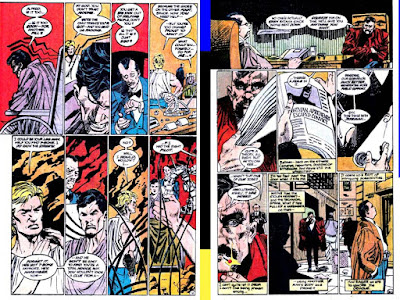 Riordan reunites with Harbinger (using a new body, along with a new power....that of strong suggestion, which only doesn't work on bodies with the Harbinger tech....like Roy Kane's).  Batman confronts Harbinger (who is now using a Bonecrusher body), fighting Batman (but Kane's body isn't Batman's, so he gets injured, then killed).  Bruce and Roy's sister, Jeanne, blame Bruce for Roy's death.  Harbinger also died, but had put Riordan under a suggestion to only tell the truth, so he reveals that all evidence against Bruce Wayne is false, making the cartel have Ducard eliminate him.  As Ducard leaves Gotham, he tells Bruce he knows his secret.  Bruce, having recovered from this ordeal, has Alfred destroy the body switching device, and comes to terms with the pain around him, knowing he has the ability to stop some of it. 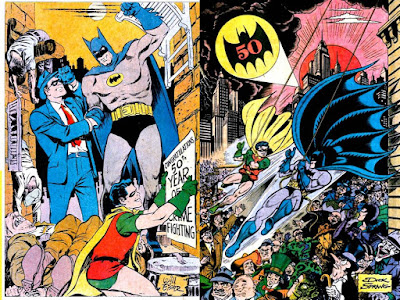 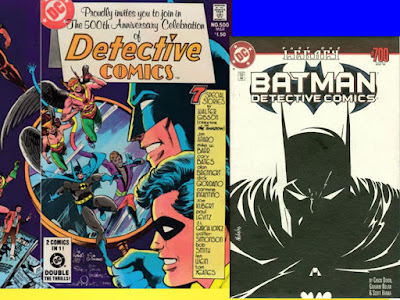 This 600th issue was celebrated over many issues, not like the previous 500, but wait until you get a load of the next spectacular in the 700th (and so many more issues).