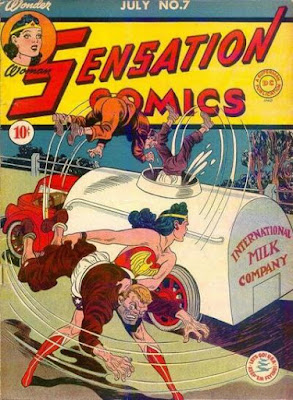 Today is Milk Day, and time to celebrate it with Wonder Woman.

Wonder Woman was involved in a little caper with milk all the way back in Sensation Comics #7 (July, 1942) in a story by William Marston and Harry Peter (with Peter also drawing the cover).

Diana finds out the International Milk Company run by Alphonso De Gyppo had bought all the nation's milk, and was running up the prices on consumers.  Investigating, she found this was a plot by her foe, Baroness Paula Von Gunther, who was not as dead as she had appeared in the previous issue.  The criminals dumped Diana in a milk vat to drown, but she escaped as Wonder Woman, putting an end to the villains' schemes, and restoring good fresh milk to kids at affordable prices!
Posted by Dave's Not Here Comic Blog at 4:45 AM