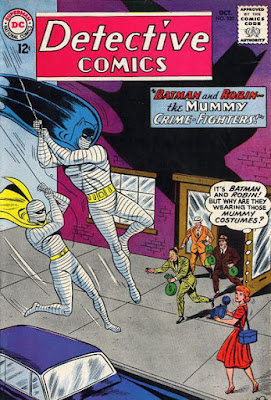 Seems like Batman and Robin got all wrapped up in the case they were involved in!

In Detective Comics #320 (October, 1963), it was "Batman and Robin -- The Mummy Crime-Fighters" in Gotham (by Dave Wood, Sheldon Moldoff and Charles Paris, with Moldoff providing the cover).

The dynamic duo weren't ancient Egyptians, but instead, Bruce Wayne and Dick Grayson were exposed to rays from an alien space capsule, turning their skin green, and to protect their secret identities (especially from prying reporter, Vicki Vale), they had to go into action covered from head to toe, so as not to lose their dual identities (claiming exposure to radiation caused their super-hero selves to be bandaged for a time).  This allowed them to capture the criminal, Eddie Crow.

Ah, for the simplistic time when this was the most logical solution to a problem!
Posted by Dave's Not Here Comic Blog at 3:39 AM