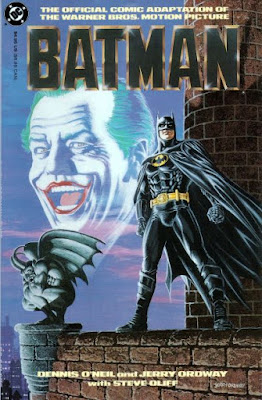 On June 19th, 1989, Batman the movie arrived at a special engagement for a theater, with Michael Keaton as Batman, Jack Nicholson as the Joker, Kim Basinger as Vicki Vale, Pat Hingle as Com. James Gordon and Michael Gough as Alfred Pennyworth directed by Tim Burton (with a general release on June 23rd).


DC produced two adaptations of the movie, one deluxe Baxter paper additions, both with covers by artist Jerry Ordway!


Inside the books were the story of Batman as told in this movie, adapted by writer Denny O'Neil and drawn by Jerry Ordway. 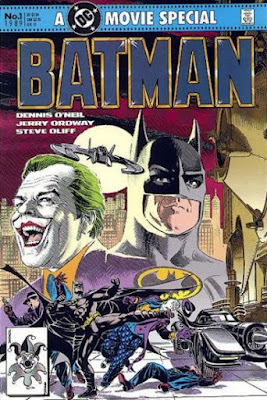 Always odd to see a story from comics, made into a movie, then turned back into a comic!  Still, a very interesting look at what movies can do....as well as what works well in a comic book!

Notable as well, for launching a Batman craze in the comics, with Batman taking a major position at DC (yet also remaining a little distant from the rest of the company's characters), and drawing from the very serious treatment of Batman from Alan Moore and Brian Bolland's The Killing Joke, as well as Frank Miller's work on The Dark Knight Returns with a larger than life Batman/Joker battle and a focus on the psychological ramifications of who created whom, as well as setting up a line of sequels, and ushering in a run of comic book based movies.

Posted by Dave's Not Here Comic Blog at 4:02 AM