Wonder Woman Versus The Mummy 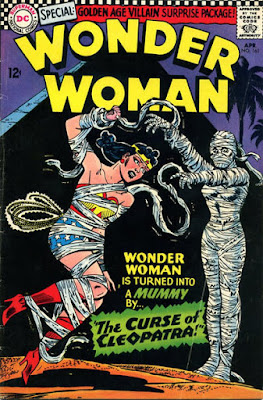 Think Wonder Woman would have trouble with a mummy?

Studio executive Magnum Magnus wanted Wonder Woman's help with his mummy movie, as his stars fell under the curse of the tomb, so Steve Trevor and Wonder Woman headed out to play Antony and Cleopatra!

While at the pyramid, it is found out that Countess Draska Nishki is really the mummy, and is defeated by Wonder Woman.

So, in a battle between Wonder Woman and a mummy, we'd know who would win!
Posted by Dave's Not Here Comic Blog at 3:00 AM