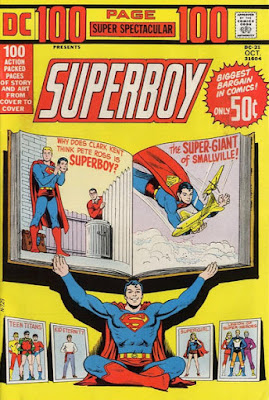 Technically, it is the 100 Page Super-Spectacular #DC-21 of October, 1973, with a cover by Nick Cardy, featuring Superboy as the larger than life lead, with friends like the Teen Titans, Kid Eternity, Supergirl and the Legion of Super-Heroes as features of the issue.

Here's a look at the special stories contained within the pages of this volume.... 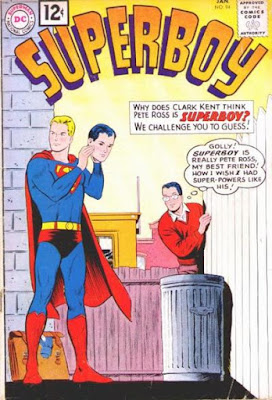 First up is the story of "The Superboy Revenge Squad" from Superboy #94 (January, 1962), which originally had a cover by Curt Swan and Stan Kaye, and original story by Robert Bernstein and George Papp.

Aliens planned on finding Superboy's home planet, so they can destroy it.  So, to protect Ma and Pa Kent (and all of Earth), Superboy hypnotized himself to forget his Superboy identity for 24 hours, living as just Clark Kent (so the aliens couldn't home in on him).  But, what of all the problems Superboy usually dealt with?  Well, Clark's friend, Pete Ross (who had secretly found out Clark's Kryptonian identity, but Clark doesn't know Pete knows), takes action, tricking Clark to accidentally use his powers to save people (but Clark then thinks Pete is Superboy while under the influence!).  The ploy worked, the aliens left, and Superboy's memories returned, none the wiser that of the help Pete performed! 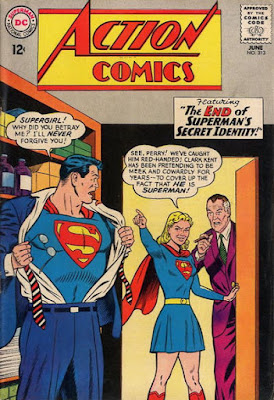 Next up is the Supergirl back up story from Action Comics #313 (June, 1964), with "Lena Thorul, Jungle Princess", by Leo Dorfman and Jim Mooney (though the cover is for the lead story of the issue, which is by Curt Swan and George Klein).

Lena Thorul was trying to join the FBI, with the government agency sending her to interview Lex Luthor (unknown to them and her, her brother).  With her ESP powers, she finally finds out the truth, which sends the girl into amnesia-like state, eventually wandering to Africa, where she uses her mental powers to work with animals, then returns to the USA when her memories start to come back.  Lex breaks out of jail to invent a formula to remove bad memories, exposes Lena to it so she can forget he is her brother, then is returned to jail by Supergirl. 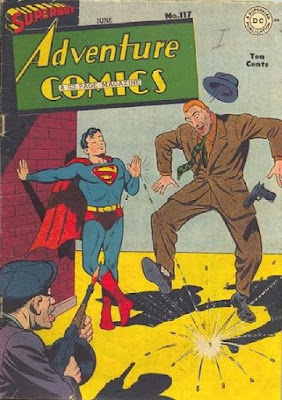 Time for an early tale of the young Superman, Superboy, from Adventure Comics #117 (June, 1947) called "The Miracle Plane" by Bill Finger, John Sikela and George Roussos, under a cover by Jack Burnley and George Roussos.


Superboy helps an inventor, who is also the father of Clark Kent's classmate, Gene Dekker, who has invented a VTOL aircraft (which Gene makes a model of and enters in a class contest).  Superboy stops thieves who try to steal the model, with Gene then winning the contest, and Superboy builds a full-size model of the plan, that also works, delighting both the boy and his dad! 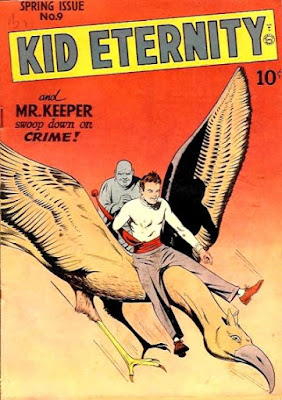 Next up is a lively story from Kid Eternity #9 (Spring, 1948) by William Woolfolk and Al Bryant, featuring Kid Eternity, hero called to heaven too soon and his pal, Mr. Keeper (who originally made the mistake, and now oversees him to help his heroic efforts).

Kid Eternity uses his powers to temporarily revive the dead to help a dying newspaper reporter make a story against local criminal, the Beagle, so that Joe Hodges has a chance to have his name remembered for cleaning up crime in his hometown.  The Kid calls on Mercury (how odd, as the god shouldn't be dead), reporter Richard Harding Davis, and even Cyrano de Bergerac to stop the Beagle (though the Beagle kills Hodges to stop the story, but the Kid revives him, allowing him to finish his last story). 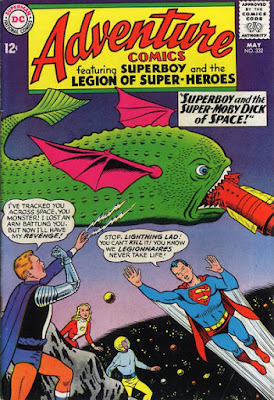 It's an epic adventure from Adventure Comics #332 (May, 1965) from Edmond Hamilton, John Forte and George Klein, all under a cover by Curt Swan and George Klein, where Superboy and his 30th Century friends, the Legion of Super-Heroes, face off against "The Super-Moby Dick Of Space". 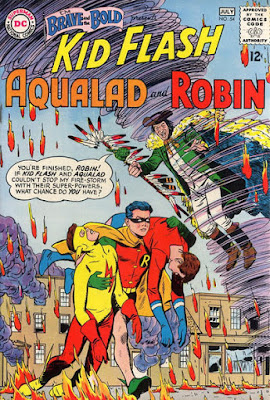 Technically called the first appearance of the Teen Titans, Brave and the Bold #54 (June-July, 1964) features Robin, Kid Flash and Aqualad in their first meeting, facing off against "The Thousand-and-one Dooms Of Mr. Twister" in a story by Bob Haney, Bruno Premiani and Sheldon Moldoff (with a cover by Bruno Premiani).

The sidekicks of Batman, Flash and Aquaman gathered together to help the kids of Hatton Corners, who are at odds with their parents, as Mr. Twister has kidnapped all the kids, and uses his mystic stick to control the weather, but the super-kids work together to stop the menacing man, with Robin delivering the villain's end, and the children are freed to reunite with their parents. 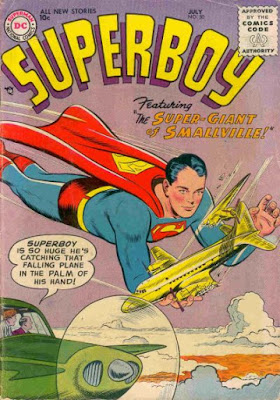 Superboy saves Professor Tinker, an odd scientist living near Smallville, who wants to test his Titanic Tonic formula on the Boy of Steel.  It doesn't work, but Superboy uses optical illusions and a giant puppet to fool the professor into thinking it did.  The supposed giant-sized Superboy still tries to rescue people as the professor tries to make a cure, but ends up causing more damage due to his "enlarged size".  Eventually, the professor comes up with an "antidote", and Superboy hides his giant tools, but was really using his giant self to show the professor that some of his inventions could be dangerous, and to concentrate on safer endeavors (would that other professors Superboy knows would follow his example!). 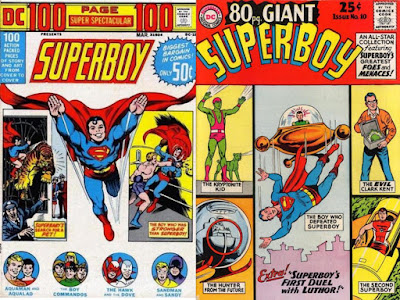 The back cover of the issue features a cover gallery of four of the stories above (the Adventure Comics, Kid Eternity and the Brave and the Bold), as well as a letters' page, which featured letters on a previous Superboy Super Spectacular (and, of course, Superboy also had an 80-Page Giant in the past, both of which will be looked at in the future!).
Posted by Dave's Not Here Comic Blog at 4:55 AM