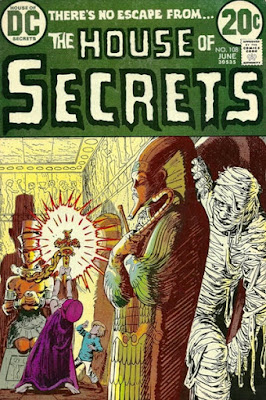 One of the stories of House of Secrets #108 (June, 1973) was the story host Abel told (with the help of Maxene Fabe and Rico Rival, with Jack Sparling on the cover) was that of "A New Kid On The Block", not a member of the boy band, but a young Egyptian man who was trying to impress his friends with an ancient dagger he has (that his uncle says is cursed).  The boy's friends convince him to sell it to a crooked pawn broker, but later a friend goes to take it back....finding a mummy attacking the pawn broker, enacting the curse by killing the pawn broker.  Taking the dagger while the mummy was otherwise occupied, the lad sees the mummy going to his Egyptian friend's house, and goes inside, killing the mummy to save his friend.  This starts the Egyptian boy crying...as his friend has killed his mommy (who was a mummy)!

This wraps up our mummy coverage!
Posted by Dave's Not Here Comic Blog at 4:00 AM