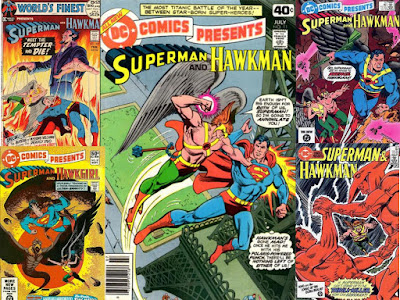 It's a meeting of aliens on Earth....Superman, the caped Kryptonian with Hawkman the Thanagarian police officer (at least, that's what he was when he was having semi-regular meetings with the Man of Steel).

What circumstances brought these two heroes together in the Bronze Age (other than the Justice League, of which they were both members?). 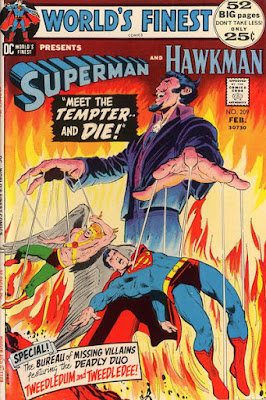 First up for the Superman/Hawkman team ups is World's Finest Comics #209 (February, 1972) when they would "Meet The Tempter -- And Die!", under a cover by Neal Adams and Dick Giordano, with story by Mike Friedich, Dick Dillin and Joe Giella.

Meet the Tempter, who appears to be a supernatural menace, that preys on people, to act on their worse instincts.  The Tempter gets Hawkman to act more savage (being more violent with criminals) and Superman to be more concerned about his failures (like failing to enlarge Kandor).  The Tempter even works on others, like Kro-Al of Kandor, to seek out Hawkman to use Thanagarian science to help enlarge Kandor, makes Hawkgirl want to return to Thanagar taking Hawkman with, and Lois Lane investigate Superman's failures while he is receiving an award in Hawkman's Midway City.  This all almost leads to the destruction of Midway City (which also would be the only spot on Earth to safely enlarge Kandor), if not for Hawkgirl and Lois getting a little more sense, and each calming their paramour into not giving into their basic instincts, stopping the Tempter (though none of them ever knew he was there). 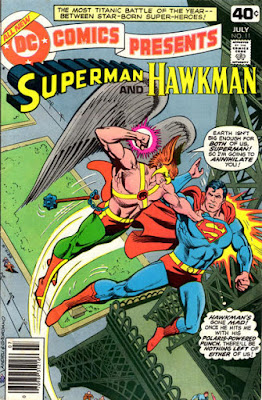 Next up was a story with a little punch, from DC Comics Presents #11 (July, 1979) by Cary Bates, Joe Staton and Frank Chiaramonte (under a Ross Andru/Dick Giordano cover), with a little "Murder By Starlight".

Superman, after nearly being killed by a bomb in a trophy he got in Paris (and a little side trip to 1944), returns to be attacked by Hawkman over Paris.  After a brief battle, Hawkman escapes, but Superman is now concerned.  A quick meeting with Hawkgirl reveals Katar Hol has been missing for over 2 days (as well as that he planted the bomb).  Following Hawkman's trail, leads to the observatory of Frank Rayles, a petty crook busted by Hawkman who inherited his brother's observatory, including the research into "Polaris Power", how to harness energy from the star Polaris (where Thanagar orbits) to control Hawkman (using a specially made mind control helmet), and enhance his power (so much, that Hawkman becomes a living bomb waiting for an invulnerable target to trigger it....like Superman).  Thankfully, Hawkman had gotten a message to a bluejay before Rayles took over his mind, and it eventually caught up with Superman, so Superman could "defuse" his friend, and the two capture Rayles. 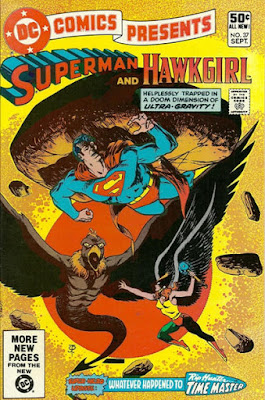 Now for something completely different....well, not really.  DC Comics Presents #37 (September, 1981)
featured a little team-up of Superman and Hawkgirl by Jim Starlin and Roy Thomas, under a Jim Starlin cover, with "The Stars, Like Moths...".

Hawkgirl, as Sheira Hall, got a call from a Dr. Irwin Wright, about a discovery of his, so, as Carter was busy in Cairo, she went to check it out, finding what appeared to be alien writing in an antechamber dating back to the 1800s.  Shayera recognized the writing as Kryptonian, so called in Superman, and the two investigated, finding out it led to a lab that was owned by Superman's great grandfather, Var-El.   Seems Var-El had perfected transport between planets, and kept a lab on Earth (where he also found he had super powers), so he could experiment further, working to find access to other dimensions.  After a brief battle with a Kryptonian security robot, Superman accidentally activated the dimensional portal, which drew him into a near orbit around a red sun (which diminished his powers), so that Hawkgirl need to rescue him.  Superman and Hawkgirl assumed that is what happened to Var-El, but.... 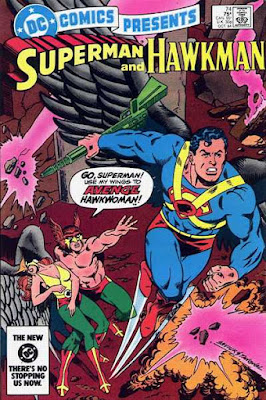 Hawkman and Hawkwoman (Hawkgirl upgraded her name between the last story and this) end up piloting their ship to save a space station and its mysterious inhabitant calling for Kal-El (Superman's Kryptonian name), as it is under attack by the Orgons (aliens who take others' technologies, whom Superman and Atom had faced, back in DC Comics Presents #51).  The aliens attack the Hawks, taking their Absorbacon (the device that allows Thanagarians to gain all knowledge).  Superman arrives to help save the Hawks, thanks to a vision of his great-grandfather, and is surprised to see him in the present (as Var-El learned to travel in time thanks to Professor Hyatt in DCCP #51). 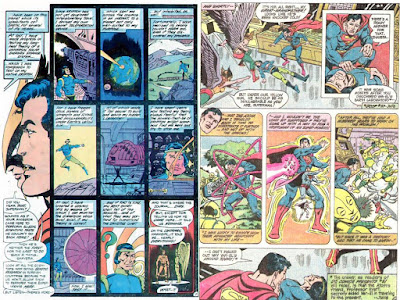 Superman and the Hawks went to stop the Orgon, who using the knowledge gained by the Absorbacon to create automated ships to attack Thanagar, but the Hawks got injured and Superman depowered by red sun rays (thus the need for him to borrow Hawkman's wings).  Still, even his invulnerable costume wouldn't protect him from the Orgons' menace, so Var-El took charged, facing the explosion that would have killed his great grandson, ending Var-El's trilogy of DC Comics Presents stories. 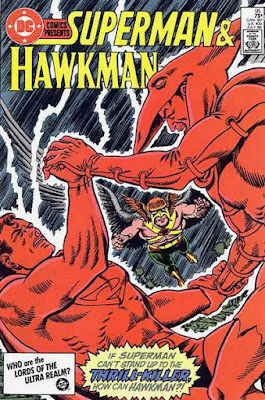 Kasta, a Thanagarian Thrill-Killer, absorbs the energy from a Black Hole.  Superman, brooding in his Fortress of Solitude about the Crisis on Infinite Earths, picks up the strange reading from the Black Hole, and assumes it is the manipulations of Mongul, so goes to investigate, demonstrating to Kasta (hidden behind a cloaked ship) his vulnerability to Black Hole energy (like he just absorbed).  On Earth, Hawkman cares for his sick wife, Shayera, the Gentleman Ghost lets Katar know that Kasta the Hunter is approaching Earth during Thanagar's Shadow War, with the idea of killing Superman.  Gentleman Ghost then vanishes, with Hawkman to go help Superman alone, knowing that, thanks to the Thanagarian possession of the Absorbacon, he cannot explain too much of Thanagar's involvement, so as to keep Earth's heroes safe.  The two send the villain packing, but the friendship between Superman and Hawkman is strained due to Hawkman hiding information from Superman (though, he would get filled in later). 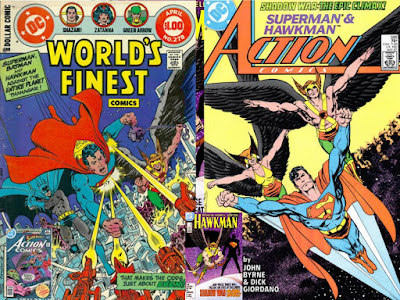 Of course, Superman and Hawkman worked together many times in the Justice League of America book since Hawkman joined, as well as a few times in Action Comics and World's Finest Comics (seems Superman was pretty helpful in freeing Thanagar from invaders, something Hawkman appreciated, to be sure, especially the second time, ending the Shadow War!).

These two heroes changed after the Crisis On Infinite Earths and Hawkworld, and a few times after that as well, but remain high flying friends, eventually.

Posted by Dave's Not Here Comic Blog at 4:44 AM