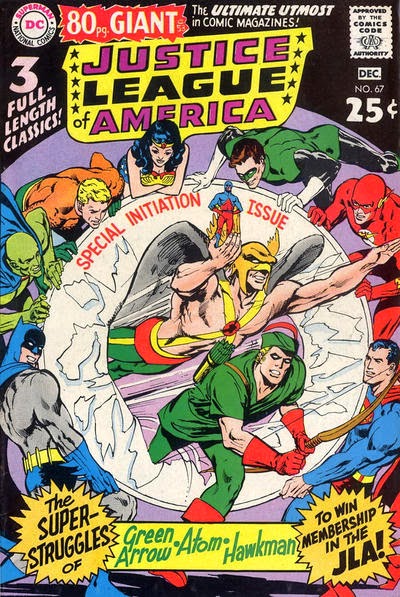 Sure, the Justice League of America was a pretty big group with its original 7 members, but...the team felt the need to add more members to their lineup!


Green Arrow, Atom and Hawkman were the first 3 heroes to join the JLA after it formed...

...and here's the facts on them and when these solo heroes became Leaguers as echoed by the stories under this classic cover of Justice League of America #67 by Neal Adams! 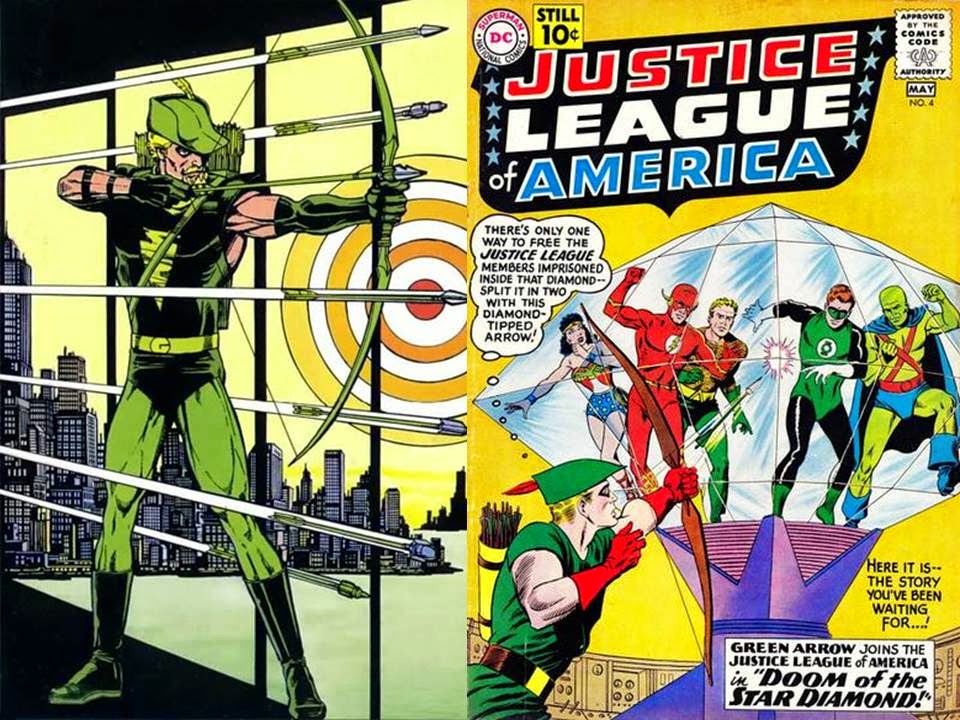 Green Arrow was the first hero to join the JLA (in Justice League of America #4, April-May, 1961), but he had been around longer than most, since More Fun Comics #73 (November, 1941, by Mort Weisinger and George Papp).  Well, not unlike Superman, Batman, Wonder Woman and Aquaman, that was the original, Earth-2 Green Arrow (who, along with his partner, Speedy, were members of the Seven Soldiers of Victory, back in the day)....as millionaire Oliver Queen by day, and masked hero with trick arrows and a boy partner by night... 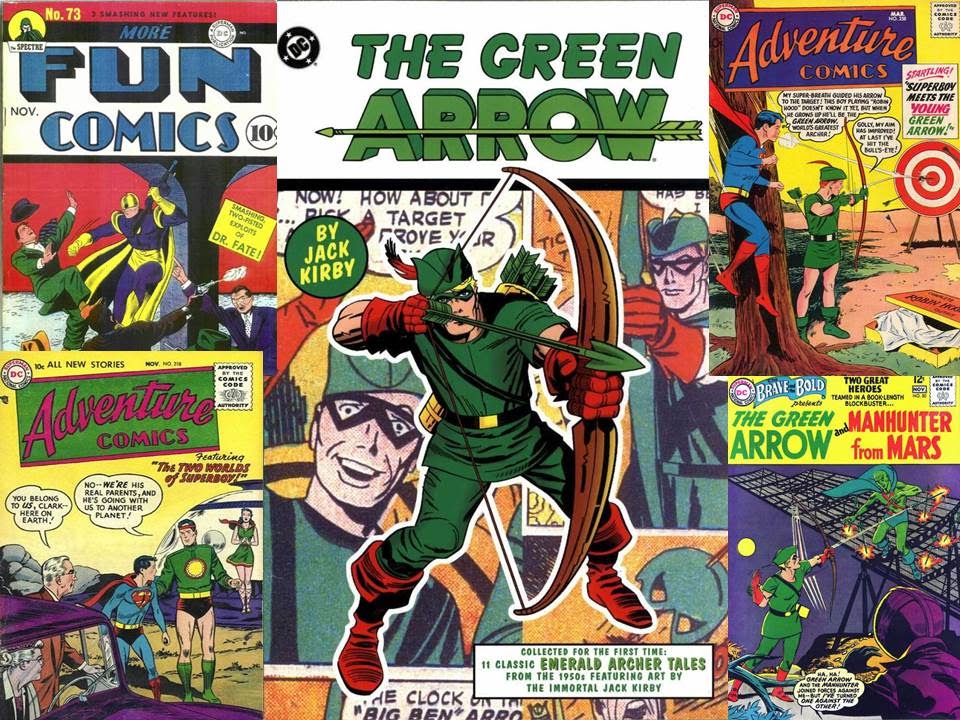 ...and the more modern Green Arrow (Earth-1's Oliver Queen) came to appear in Adventure Comics #218 (November, 1955)...or all the way up to Adventure Comics #246 (March, 1958) which had the first appearance of the Rainbow Archer (the earliest of Green Arrow's foes to make a return appearance in more modern times; unlike the archer himself, getting his early split from Earth to Earth isn't exact).  Back in those days, Green Arrow was little more than Batman with a bow, having an Arrowcar, Arrowplane, and Arrowcave (though Jack Kirby gave Green Arrow a new origin with him being stranded on an island with Adventure Comics #256 in January, 1959, ....and little in the way of personality; he couldn't even get a cover of Adventure Comics (unless he shared it with series star, Superboy like with #258)...and he was cursed with the same luck when he and Speedy (Roy Harper) moved over to World's Finest Comics (making a cover outside of the JLA only with Brave and the Bold #50, with the Martian Manhunter; he even had few foes coming to face him in the JLA, like Clock King). 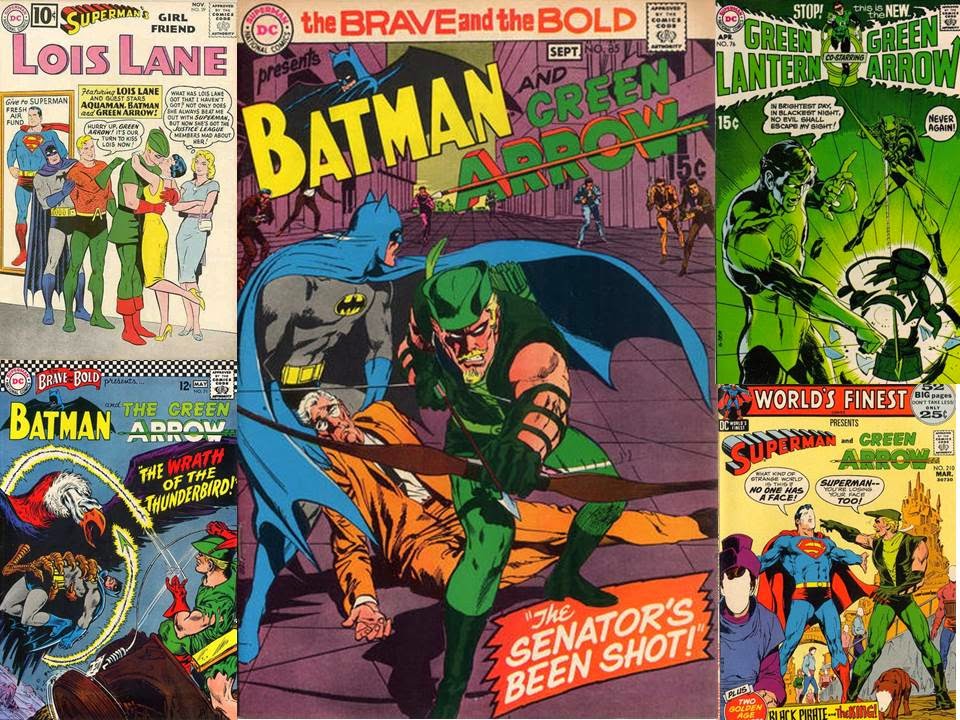 His solo stories came to an end with World's Finest Comics #140 (March, 1964), and Green Arrow was only appearing as a JLA member, until Brave and the Bold #85 (August/September, 1969) when Bob Haney and Neal Adams changed the character, giving him a new look (and, following Justice League of America #75 in November, 1969, losing his fortune and meeting Black Canary)...which let Green Arrow to become a hard-traveling hero with Green Lantern in a series of stories by Denny O'Neill and Neal Adams in Green Lantern #76-89 (1970s). 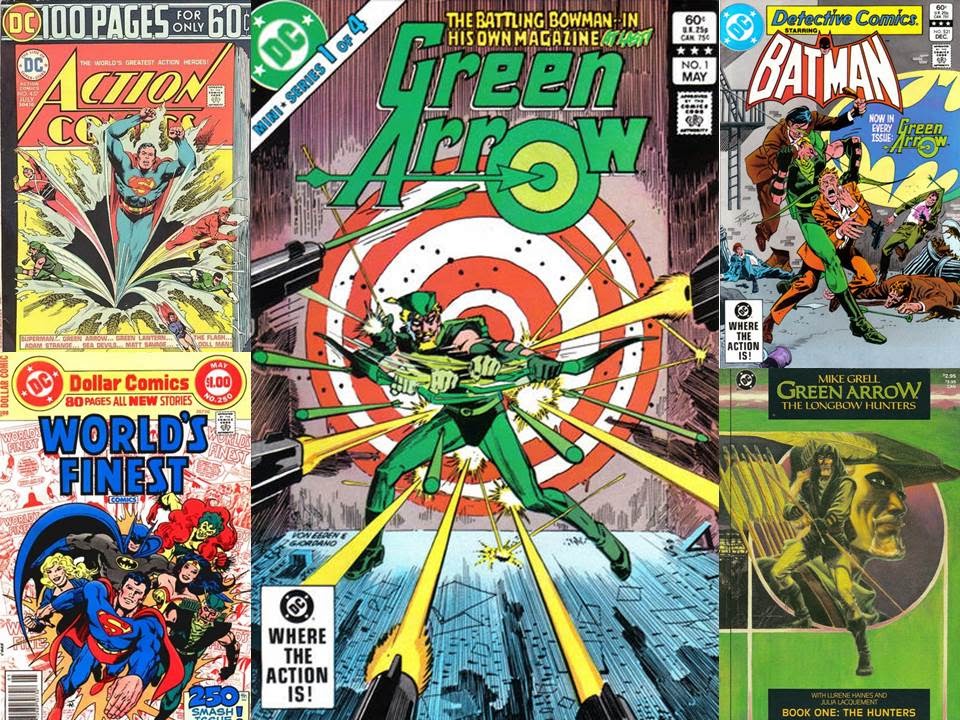 Along the way, Green Arrow picked up a few foes like Merlyn, a new back-up series in Action Comics, then World's Finest Comics (and a great 4 issue mini-series in 1983 by Mike W. Barr and Trevor Von Eeden), and plenty of team-ups with Batman in Brave and the Bold...all leading to Detective Comics where he was featured until the Crisis on Infinite Earths, finally losing that back-up in Detective Comics with #567 in October, 1986.  But, Green Arrow stayed on target, and with the Green Arrow: Longbow Hunters 3 issue mini-series by Mike Grell, he got on target his own long running series, and has been a regular all over DC Comics ever since! 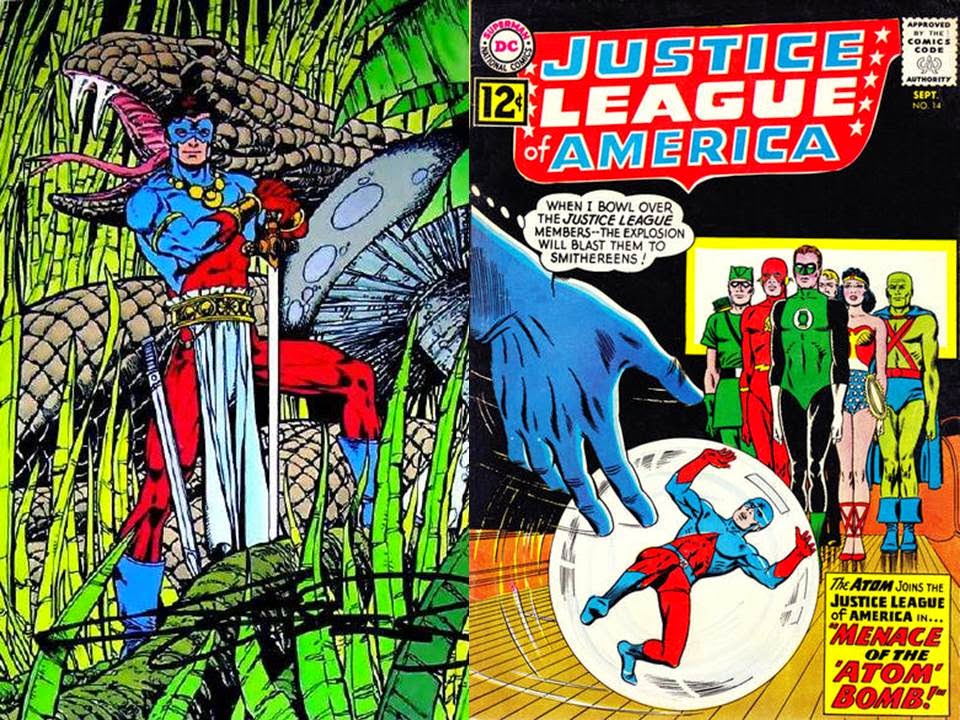 Atom got started with Showcase #34 (September-October, 1961, by Gardner Fox and Gil Kane), where physicist Ray Palmer was able to use white dwarf matter to win one for the little guy (and save his girlfriend, Jean Loring, and fellow students from a cave in).  Ray kept going as the new, scientific, shrinking hero, the Atom for two more issues of Showcase before getting his own series with The Atom #1 (June-July, 1962), and joined the JLA with Justice League of America #14 (September, 1962). 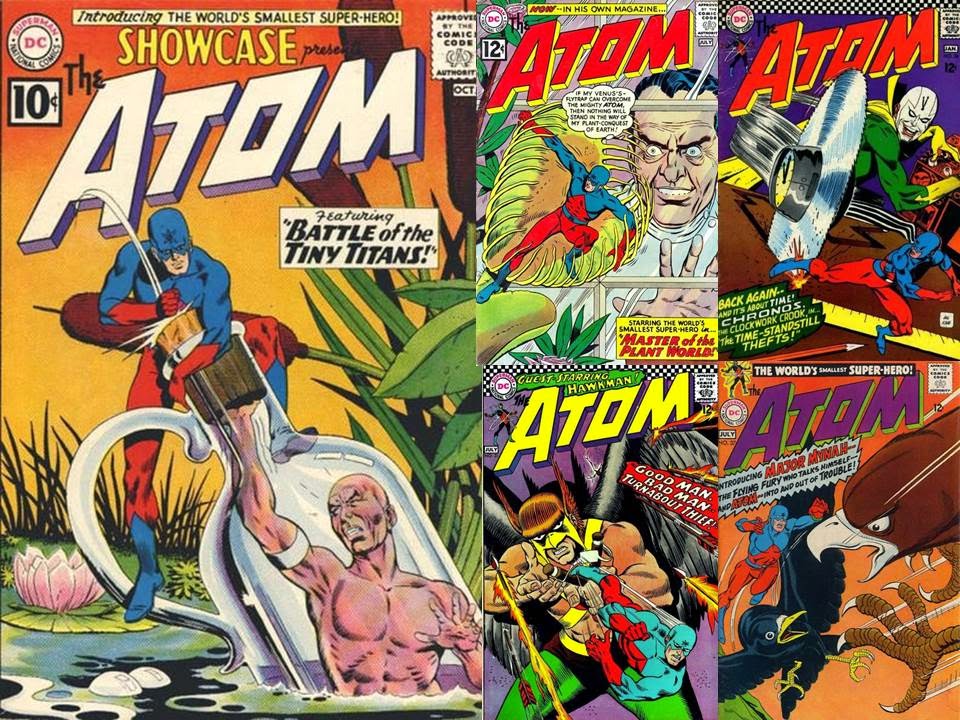 The little guy kept busy during the 1960s, facing foes like the Floronic Man, Chronos, the Highway Man, the Bat-Knights, the Bug-Eyed Bandit, the Panther Gang, Dr. Light, the Thinker as well as socializing with other heroes like the Earth-2 Atom, Zatanna and Hawkman and Hawkgirl, and even gaining a pet in Major Mynah, and traveling through time with Alpheus Hyatt's Time Pool!  All this was enough to keep the little man busy through 38 of his own issues (through August-September, 1968), then to a shared magazine with Hawkman (more on that later, but it picked up Atom's numbering, and Atom & Hawkman went to issue #45 in October-November, 1969, with the pair facing off against Jean Loring!). 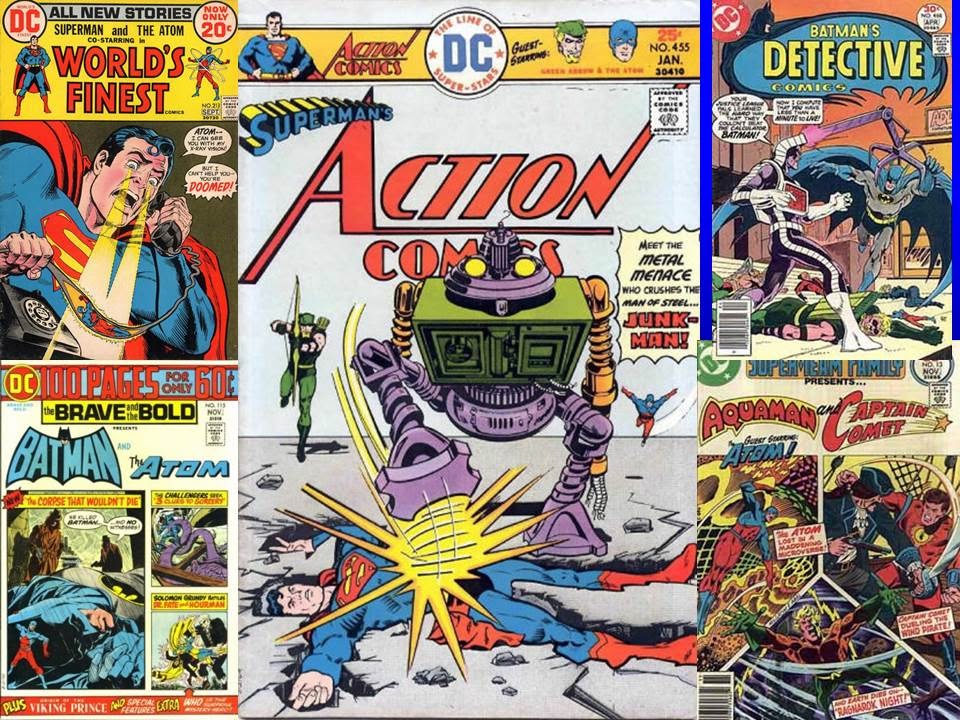 Atom kept going, being a JLAer, and popping up in Detective Comics with a solo story here and there (most importantly being the first to face the Calculator, along with Black Canary, Elongated Man, Green Arrow, Hawkman and Batman), teaming with Batman in Brave and the Bold, working with Superman in World's Finest Comics (and DC Comics Presents), as well as being a back-up many times in Action Comics, as well as being the featured player in Super-Team Family #11-14 (1977) which led to Ray finally marrying Jean Loring in Justice League of America #157 (August, 1978). 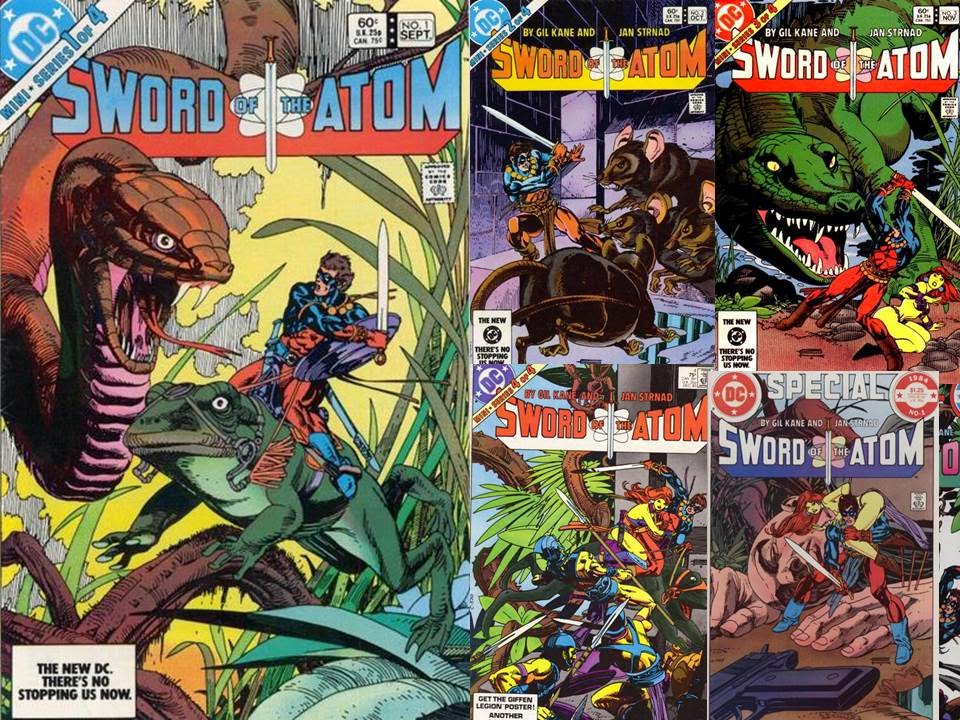 Sadly, the marriage wasn't perfect, and Ray caught Jean cheating on him, then ended up trapped in the jungle (and at six inch size) for the Sword of the Atom 4 issue mini-series in 1983 (by Jan Strnad and Gil Kane).  Though Ray got back and worked with the JLA for a time, he went back to the jungle for 3 Sword of the Atom Specials, and even helped out the JLA during the Crisis on Infinite Earths (though Atom's happy times in the jungle would not remain, as Ray came back to the world in Power of the Atom, and worked with the Suicide Squad and Teen Titans for a time after...and returning to the JLA). 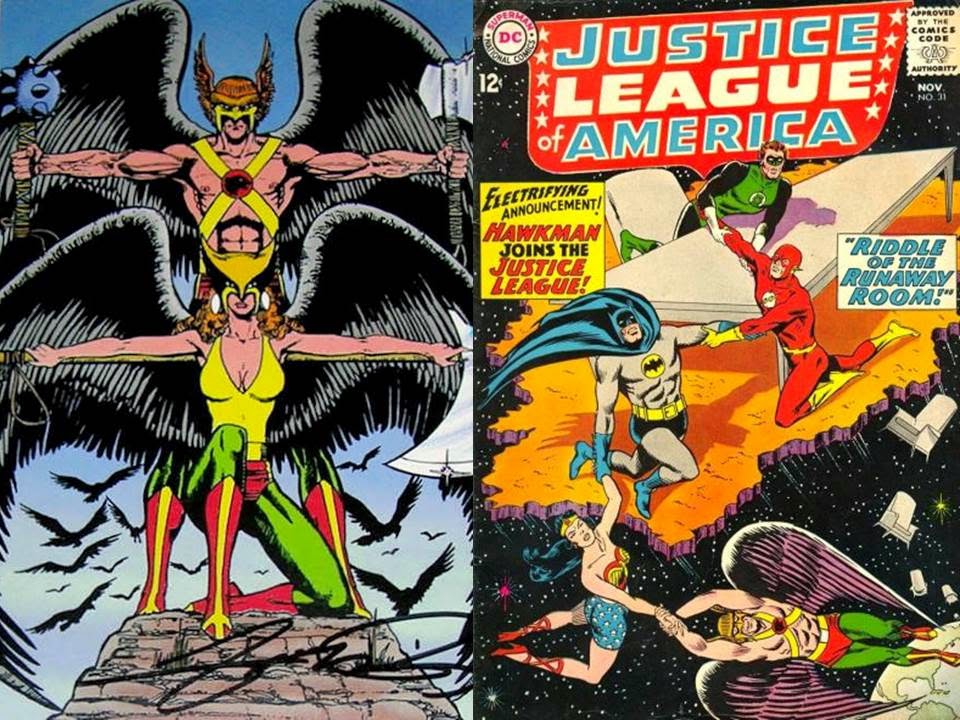 Hawkman came to Earth from Thanagar with his wife (and fellow police officer) in Brave and the Bold #34 (February-March, 1961 by Gardner Fox and Joe Kubert), looking to stop shape-shifting felon, Byth.  They were successful, and stayed on Earth (changing their names from Katar and Shayera Hol to Carter and Shiera Hall, and taking up jobs as curators of Midway City's museum, while being high flying super-heroes with anti-gravity belts and a penchant for ancient weapons, a Thangarian Absorbascon which allows them access to all Earth's knowledge,  including taking to birds at night). 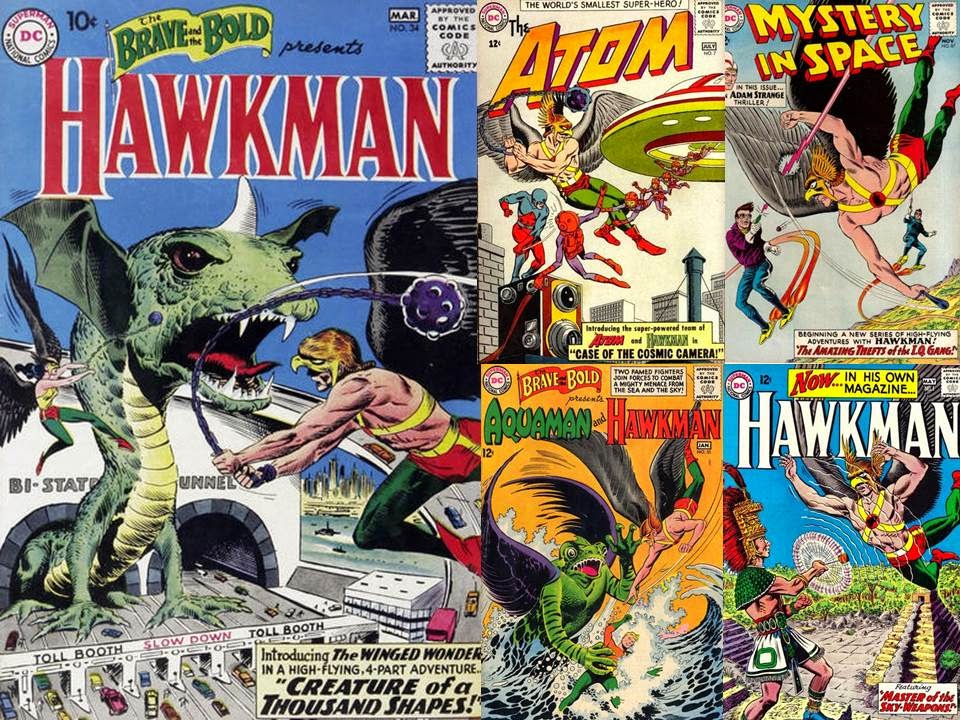 Hawkman seems to have it all going on...sci-fi hero, police detective, ancient weapon wielder, devoted husband, and he did! 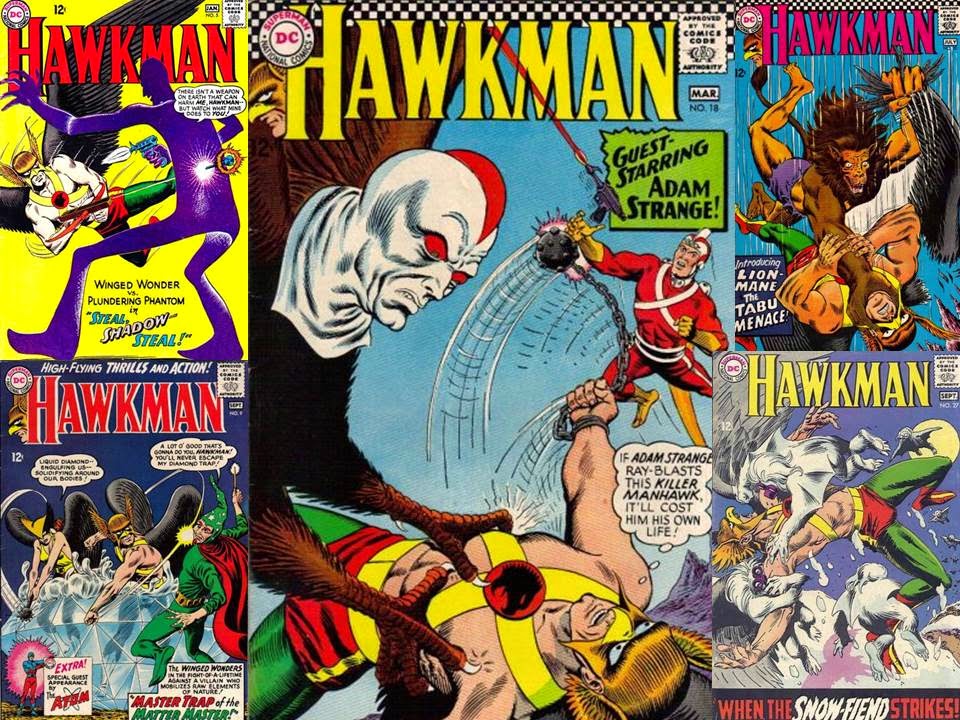 Hawkman faced menaces such as the Matter Master, the Shadow Thief, the Manhawks, I.Q., Chac, the agents of C.A.W., Fal Tal, the Shrike, the Wingors, the Raven, Lion-Mane and more (as well as introducing readers to Zatara's daughter, Zatanna) until his solo series ended with Hawkman #27 (August-September, 1968). 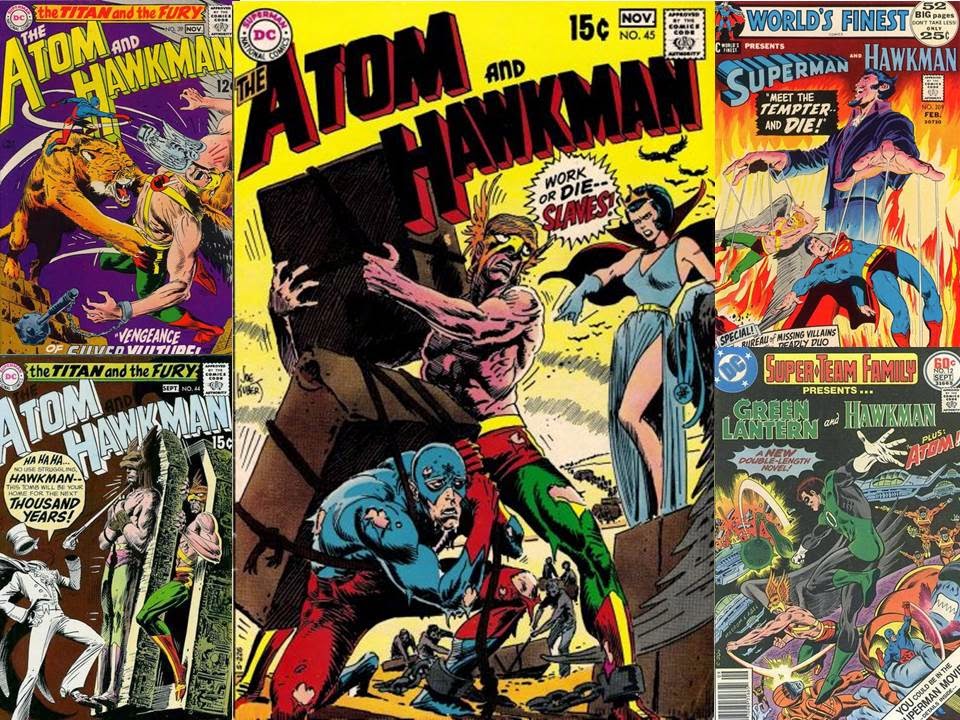 Thankfully, Carter's friend, the Atom, was looking to add on, and the Atom and Hawkman series started with issue #39 (October-November, 1968), introducing Hawkman to the Earth-2 Hawkman's foe, the Gentleman Ghost, before ending facing Atom's girlfriend, Jean Loring, in the last Atom and Hawkman (#45, October-November, 1969) a story that led into a pair of Justice League of America issues (#80-81). 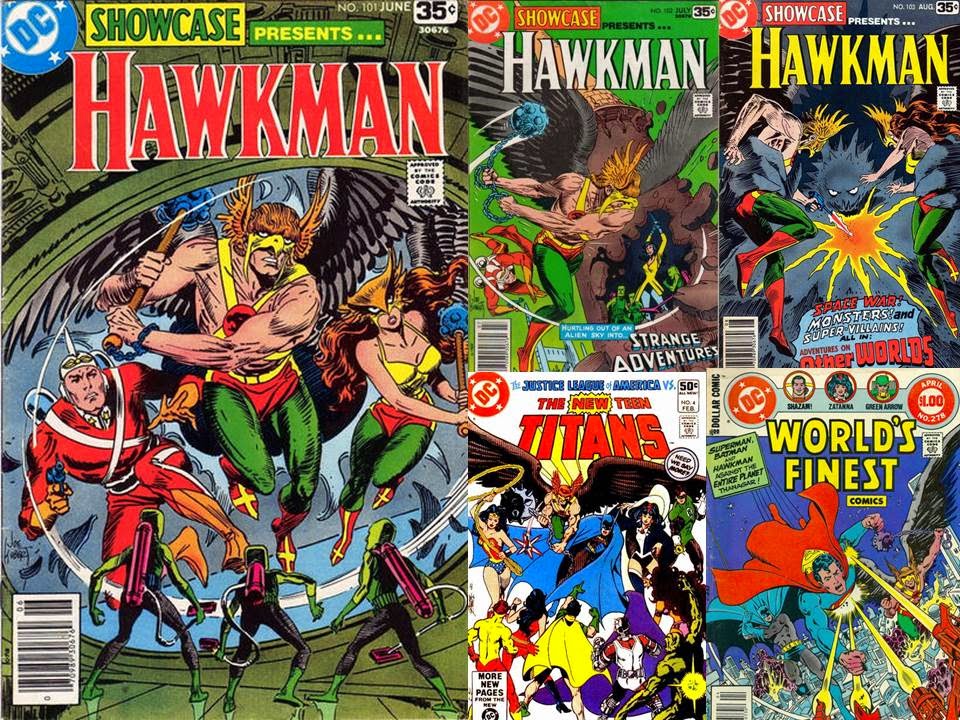 Hawkman continued flying along, working with the JLA, teaming with Batman in Brave and the Bold, Superman in World's Finest Comics and DC Comics Presents, and even as a back-up feature in Detective Comics (facing folks like Konrad Kaslak and the Fadeaway Man), leading to a conflict with his own people, and a run in Showcase (#101-103), along with Hawkgirl and Adam Strange (and almost causing Hawkman to miss Atom's wedding)..and as a back up in World's Finest Comics. 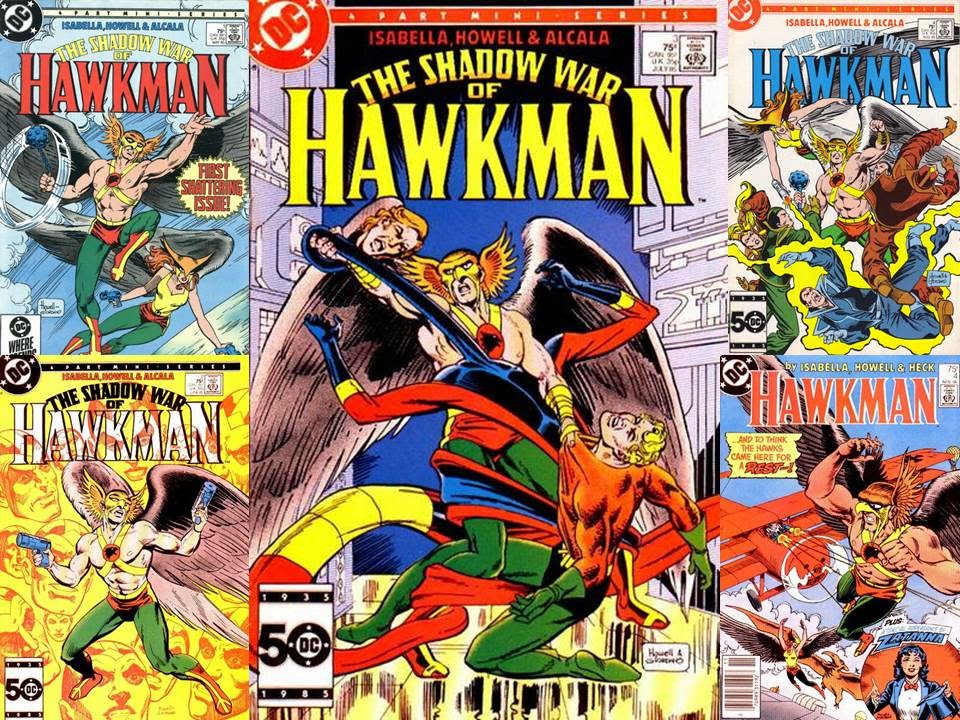 Even more conflict with his own race came later, as well as leading to the Shadow War of Hawkman 4 issue mini-series of 1985 by Tony Isabella and Richard Howell, which led to a Hawkman Special, then a regular series that lasted 17 issues, returning many old nemeses, as well as friends and a few new ones. 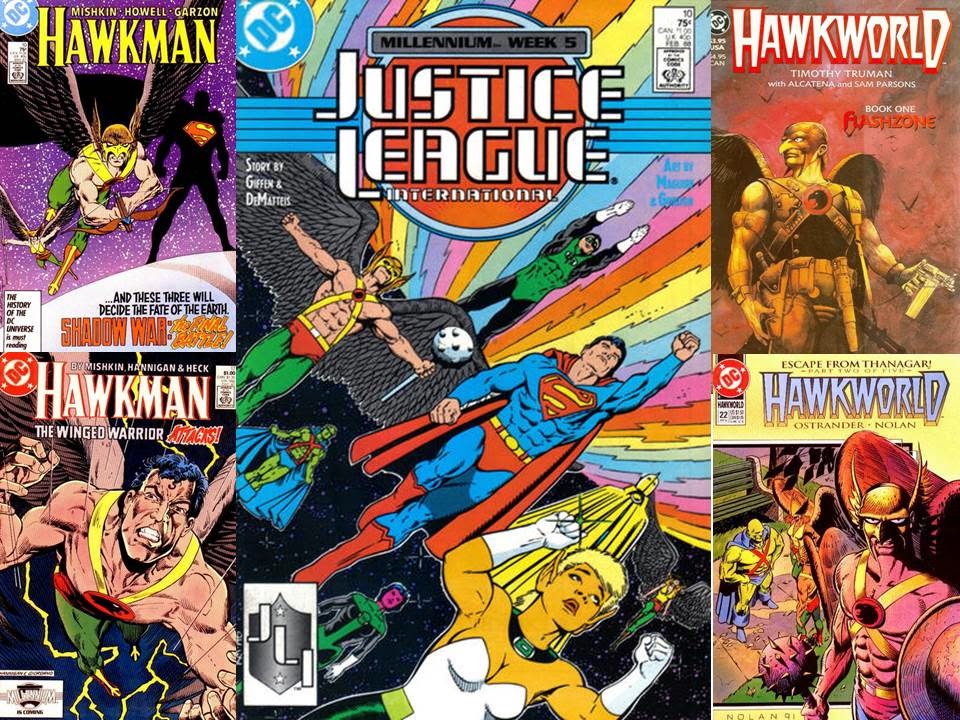 Oddly, while the Silver Age Hawkman survived the Crisis on Infinite Earths with most of his history intact, it was undone by Tim Truman's 1989 Hawkworld mini-series (not the series itself, but by it's success, though the series was originally meant to be a prequel to Hawkman's Brave and the Bold appearances; but the regular Hawkworld series brought the mini-series Hawkman and Hawkwoman to Earth right after Invasion!, making appearances in Millennium, Invasion!, Justice League International #24 and the first Hawk & Dove mini-series the last appearances of the Silver Age Hawkman and Hawkwoman; writer John Ostrander worked wonders with the Hawks in Hawkworld, but it did make a mess out of DC Comics post-Crisis continuity). 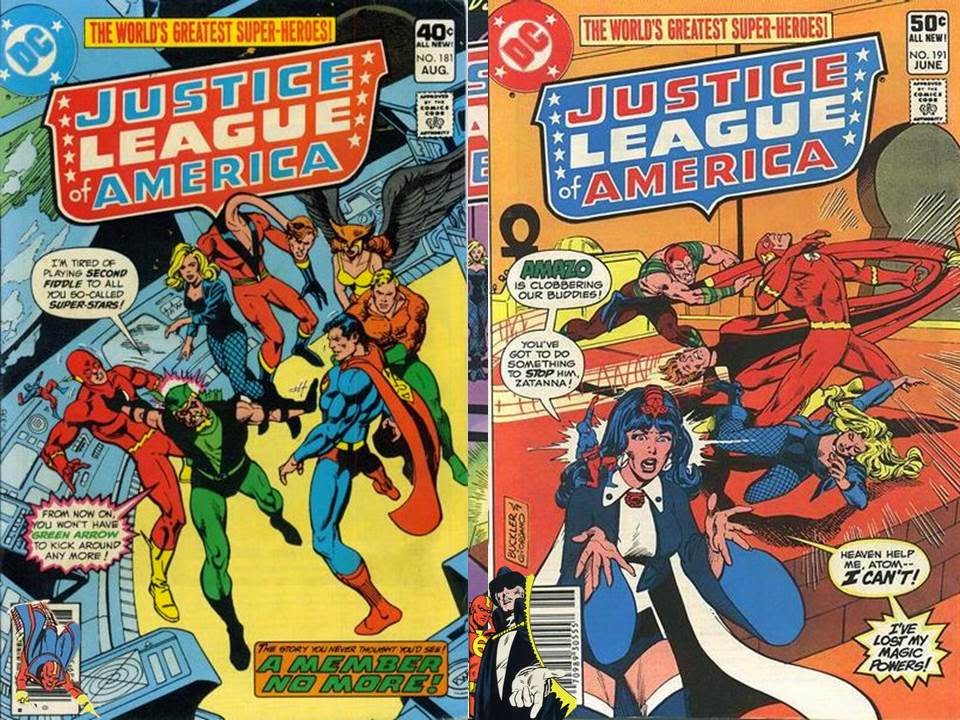 All this gives a nice overview of the earlier JLA joiners, and check back for more on the next batch, including Black Canary, Elongated Man, Red Tornado, Hawkgirl, Firestorm and more!