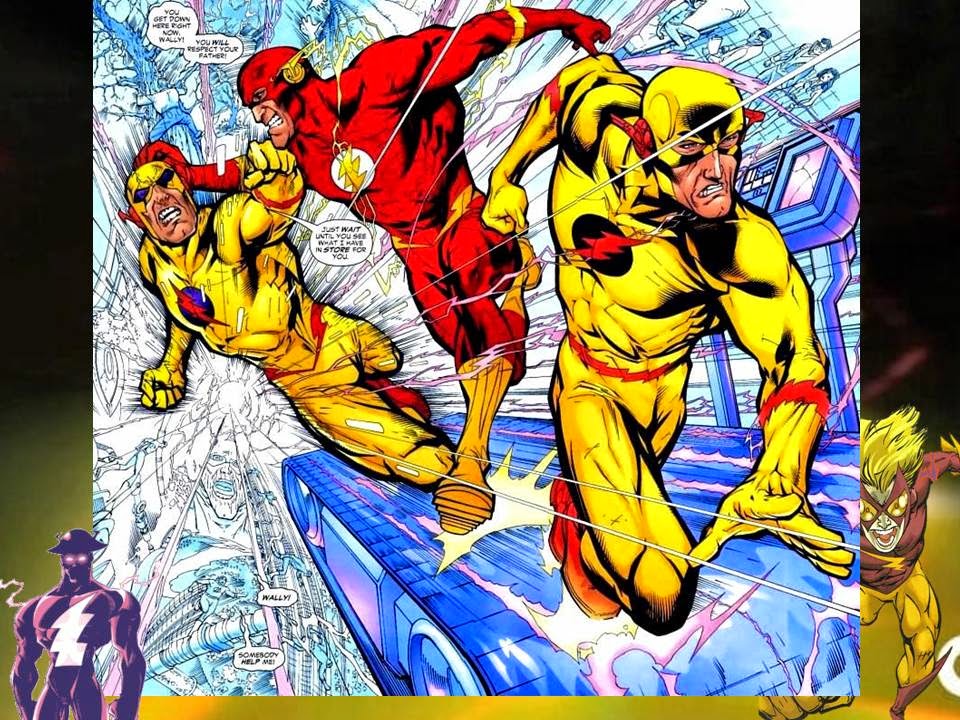 The Flash isn't the only speedster to have a legacy...it applies to the villainous speedsters as well. Here's a few facts on the folks that run the wrong way. 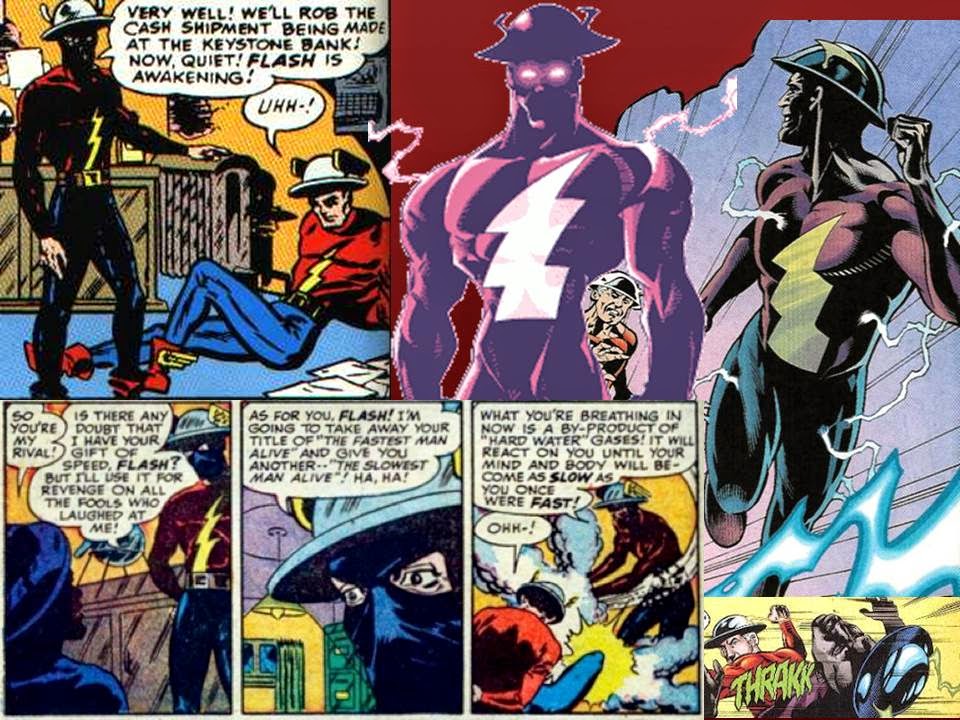 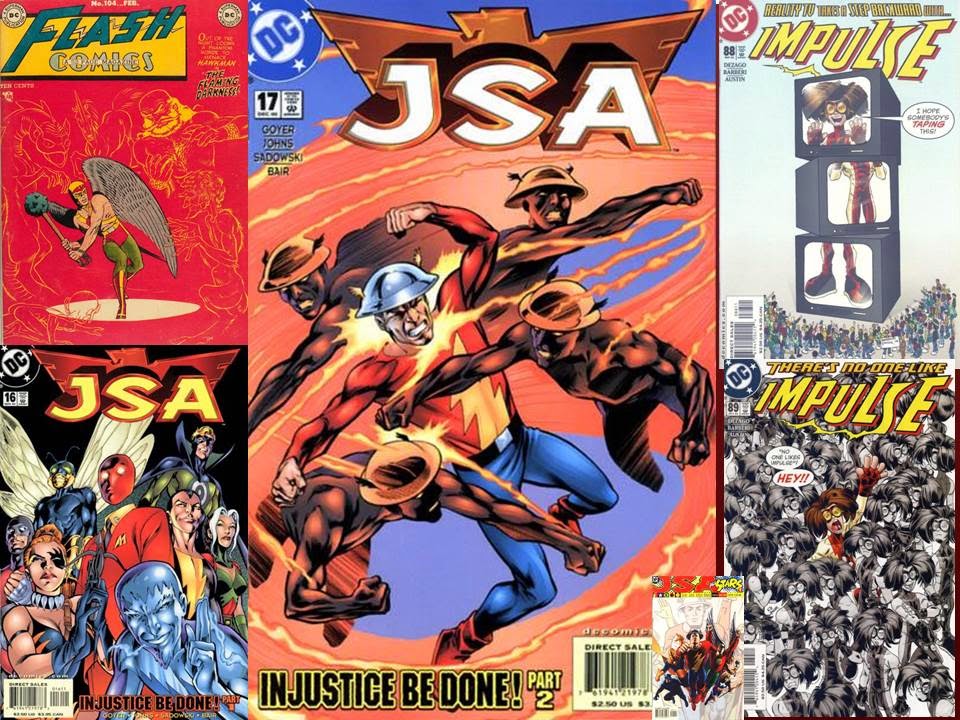 Edward Clariss was a chemist who duplicated the accident that gave Jay Garrick his speed...and became Jay's super-speed Rival in Flash Comics #104 (February, 1949).  Rival was successful in ending the Flash...that issue was the last of Jay's run.  Rival came back to face the Flash as a member of the Injustice Society under Johnny Sorrow for two issues of JSA (#16 and #17 in November/December, 2000, which gave Rival his only cover appearance!).  Rival returned again as Jay was mentoring Impulse, for the last two issues of Impulse's run (#88 and #89, September/October, 2002), wherein Rival ended up possessing Impulse's usual mentor, Max Mercury.  Jay and the rest of the Justice Society faced Rival and the Injustice Society again in JSA All-Stars #1 (July, 2003). 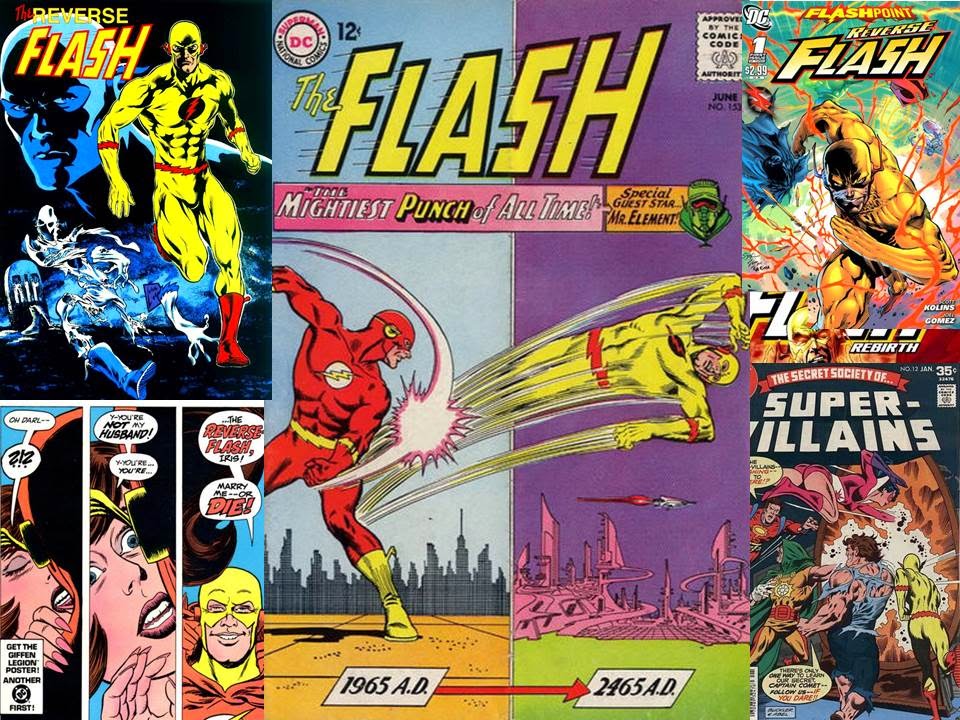 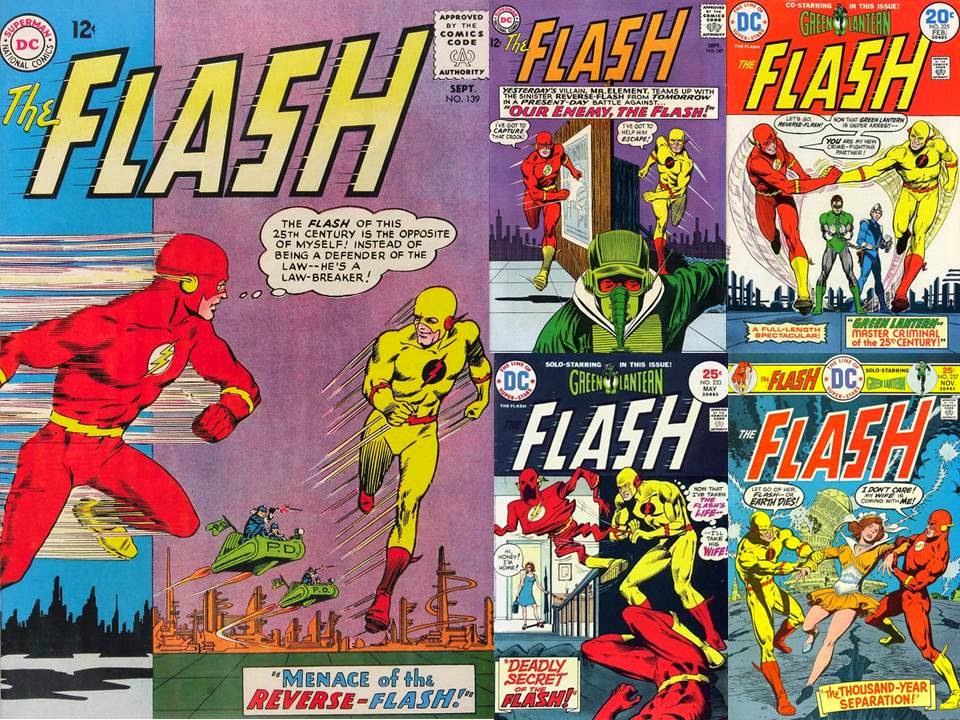 Eobard Thawne was from the 25th Century, and a fan of Flash (Barry Allen)...well, more or less.  Thawne found Barry's costume in a time capsule, and, being smart, treated it to allow him super-speed (and he reversed the colors since he planned to do evil with the costume).  Barry traveled to the 25th Century to retrieve the costume, and ended up defeating Professor Zoom (another name for the Reverse Flash).  Still, Thawne kept coming back, with more plots and plans...usually trying to become Barry Allen, or marry Iris West.  He even joined with other foes of Barry Allen, including the Secret Society of Super-Villains (most notably, Secret Society of Super-Villains #11-15 and Justice League of America #166-168), and was involved in a few of the early races between Superman and the Flash, no less! 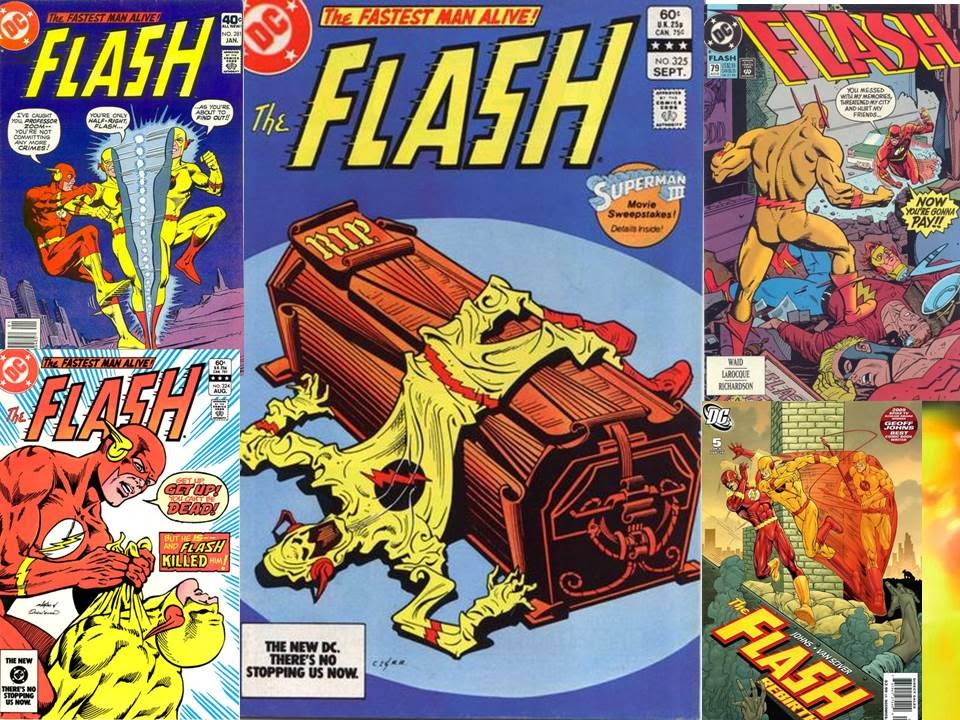 It was just another day at the races with Reverse Flash, at least until Thawne went too far, killing Iris and pushing Barry to the edge....and beyond.  Barry killed Thawne accidentally in Flash #323-325 (damaging the time stream, something hinted at right before the Crisis on Infinite Earths...and Barry's own disappearance for a time).

Still, a good villain will find a way to come back... 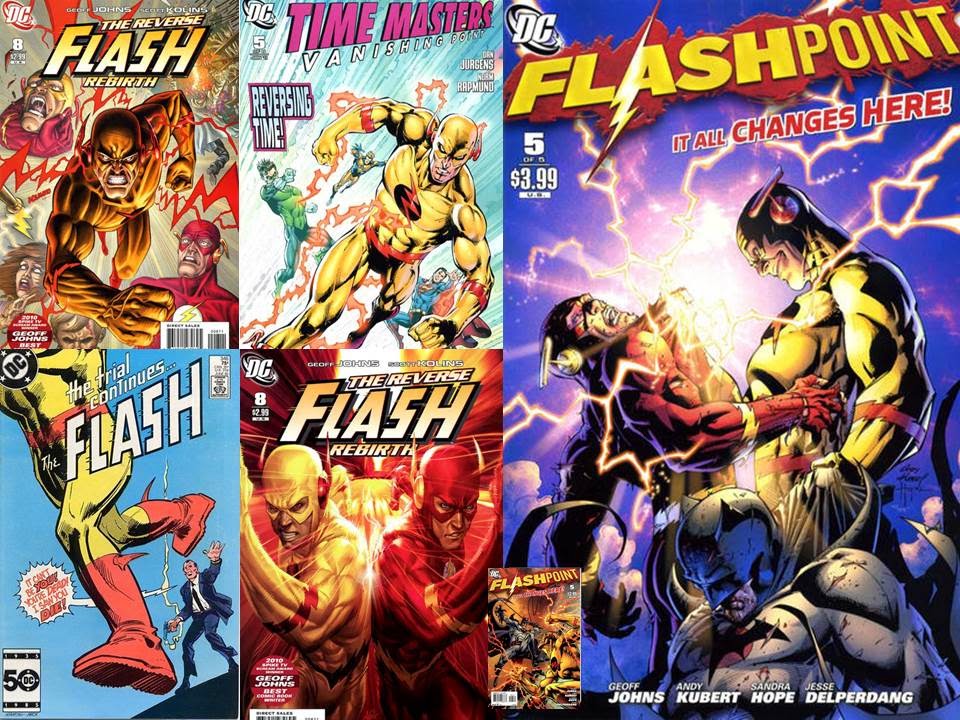 ...menacing Wally West during his time as the Flash (but before Thawne became the Reverse Flash and then again, working with another evil speedster as well), and then coming back during the Blackest Night event as an animated corpse...before being revived to life, and being a menace to Barry and the DC Universe as a whole.

The Reverse Flash had all the same speed abilities as the Flash did, but none of his moral restraint, so he messed with Barry Allen's life all along his time line, creating the Flashpoint event, then restarting the DC Universe with the New 52! 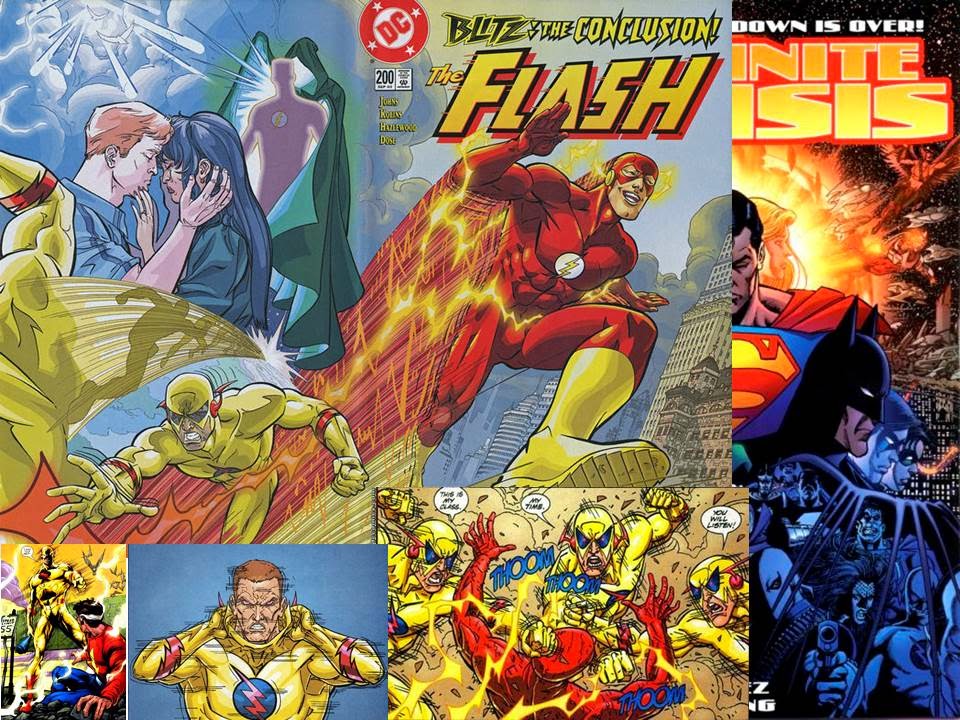 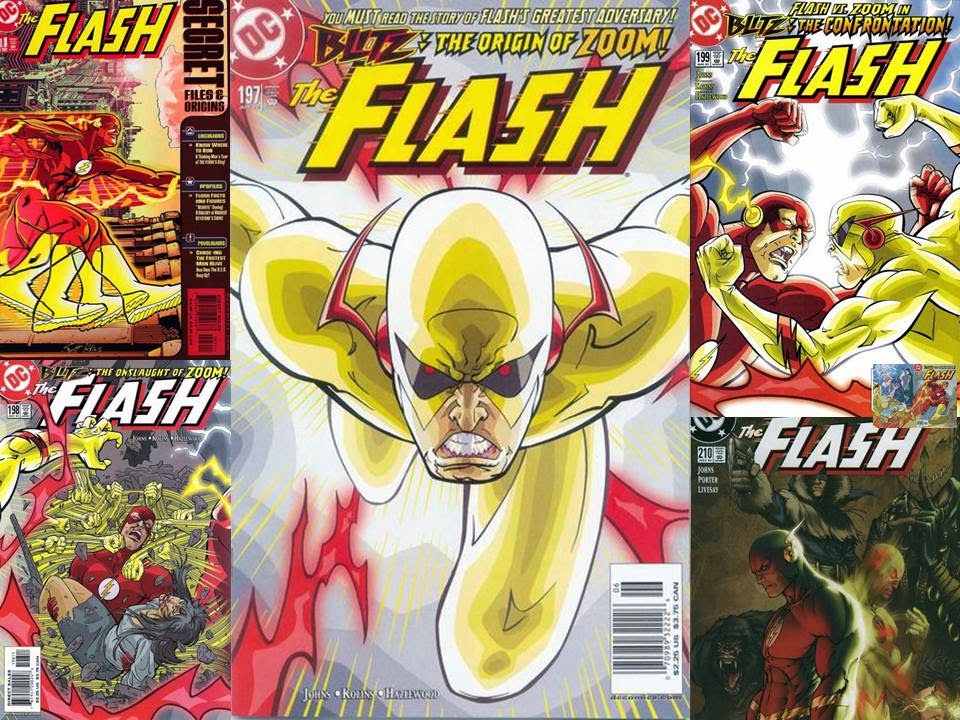 Hunter Zolomon did not have a good life, having parents who weren't particularly appreciative, and, worst still, a father who was a serial killer (who died, after killing his mother).  Hunter took this and tried to be better, working for the FBI as a psychologist, where he even found Ashley, the love of his life.  But, inaction on Hunter's part allowed a criminal to kill her father, and they split, and Hunter was injured as well, never being able to run again.  Hunter ended up at Keystone City's police department, working there, becoming friends with Wally West...at least until a savage attack by Gorilla Grodd paralyzed poor Hunter.  Hunter asked Wally to fix his lousy life by using the Cosmic Treadmill to travel in time...but Wally wouldn't.  Zolomon tried himself, and the resulting explosion shattered Zolomon's connection to time, and turned him into Zoom, fighting with Flash in Flash #197-200! 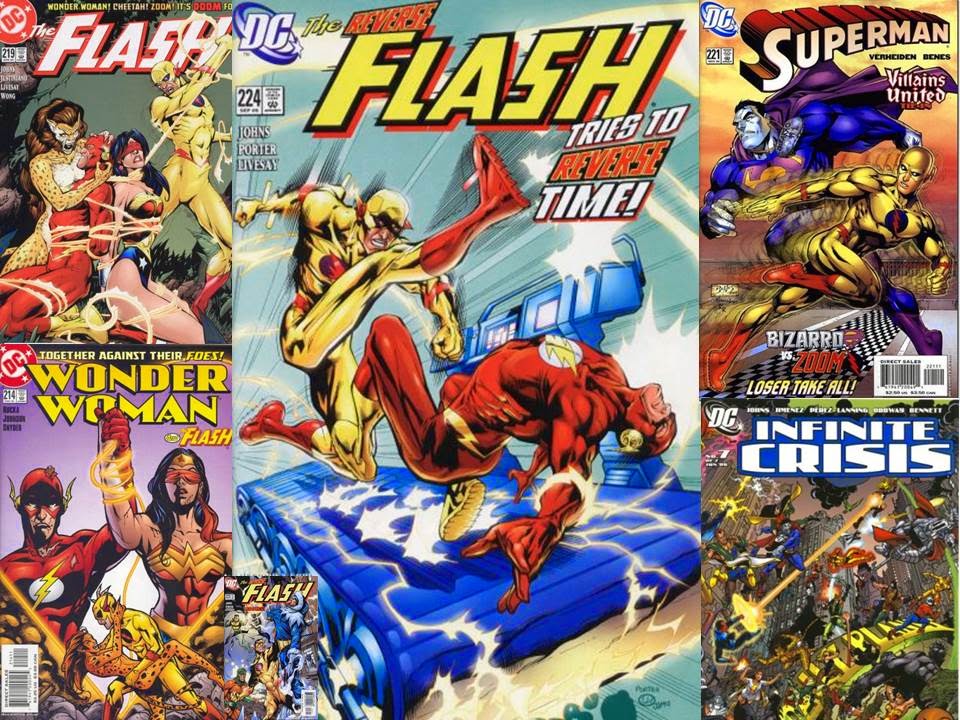 Zoom had a purpose, to make Wally West's life miserable, so that Wally would understand pain, and be willing to change time to make things better.  Along the way, Zoom works with the new Secret Society (including his recruiter, the Cheetah, and Superman's reversed clone, Bizarro), and continues his battle with Wally, including a massive battle through time, as Zoom messes with Wally's love, Linda Park, and also recruits Reverse Flash into the fight (as well as Jay Flash, Barry Flash, and Bart Allen who is Kid Flash at this time), and battles Flash's Rogue's as well, as evil speedsters are never Rogues!).

Wally stops Zoom by locking him in the moment that Ashley's father dies...and that keeps him away, at least until the Infinite Crisis (because Crises are never good for Flashes....). 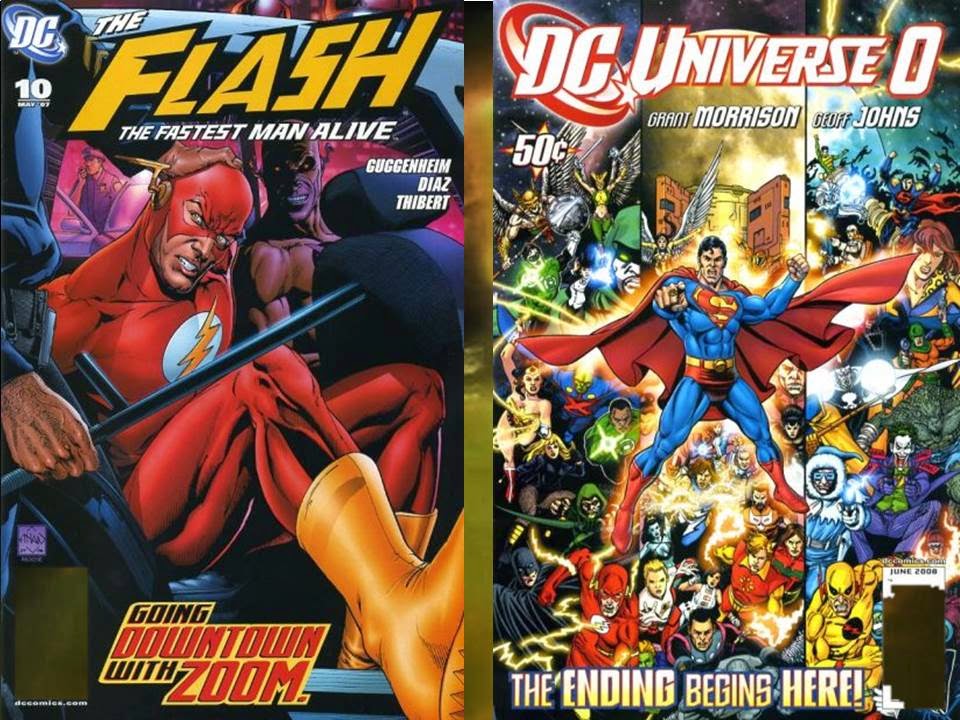 Zoom then frees the next generation of Flash (Inertia, more on him soon) from his prison while negotiating with Bart's grandma (Iris Allen) in Flash: The Fastest Man Alive #10-11, fights Damage (whom he had scarred in the opening of Infinite Crisis), joins with Libra and other villains during the Final Crisis, and then tries to change Inertia into Kid Zoom, who then changes Zoom back along his timeline into crippled Hunter Zolomon (all during Final Crisis: Rouge's Revenge).

Hunter is not deterred, and meets with Reverse Flash in prison, during Flash: Rebirth, going back to the idea he is helping Flashes, promising to make Reverse Flash better. 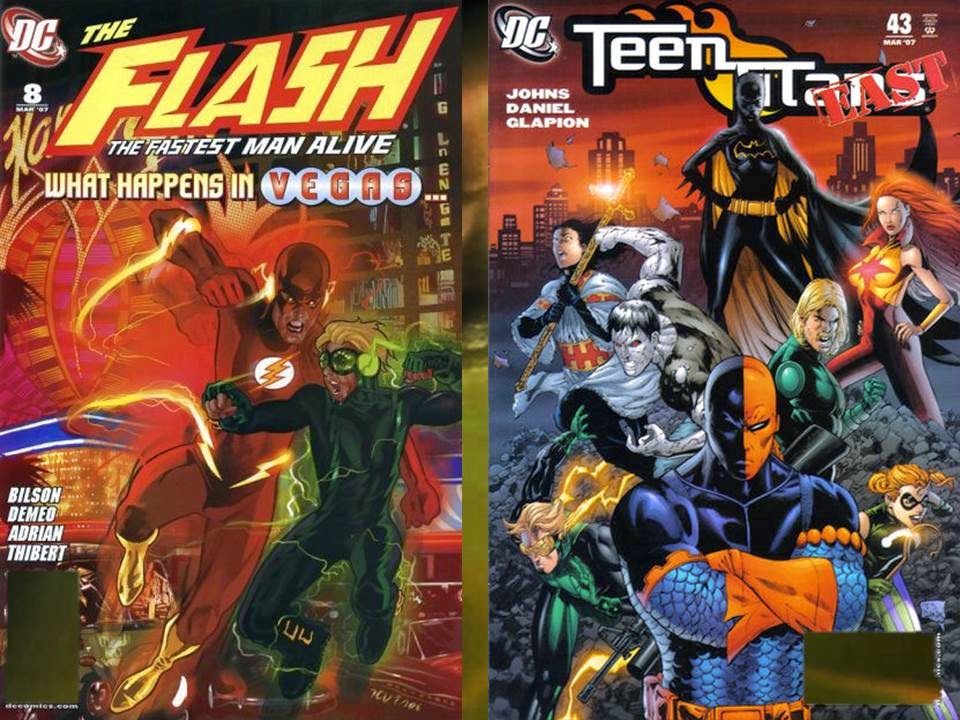 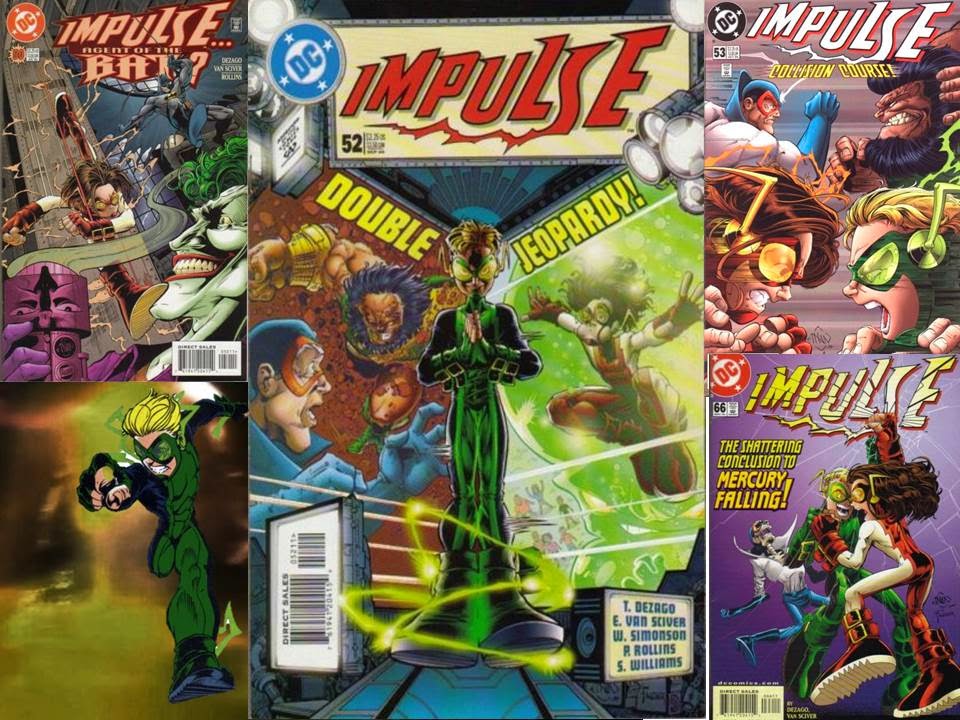 Thaddeus Thawne started life as a clone of Bart Allen (Impulse), created by President Thaddeus Thawne (a descendant of Reverse Flash) in the 30th Century, first facing Impulse (along with his mentor, Max Mercury) over the issues of Impulse #50-53 (1999), then returning for a rematch in #56, and in #63-67 (trying to be Impulse...must be a characteristic of the Thawnes to want to be Flashes!). 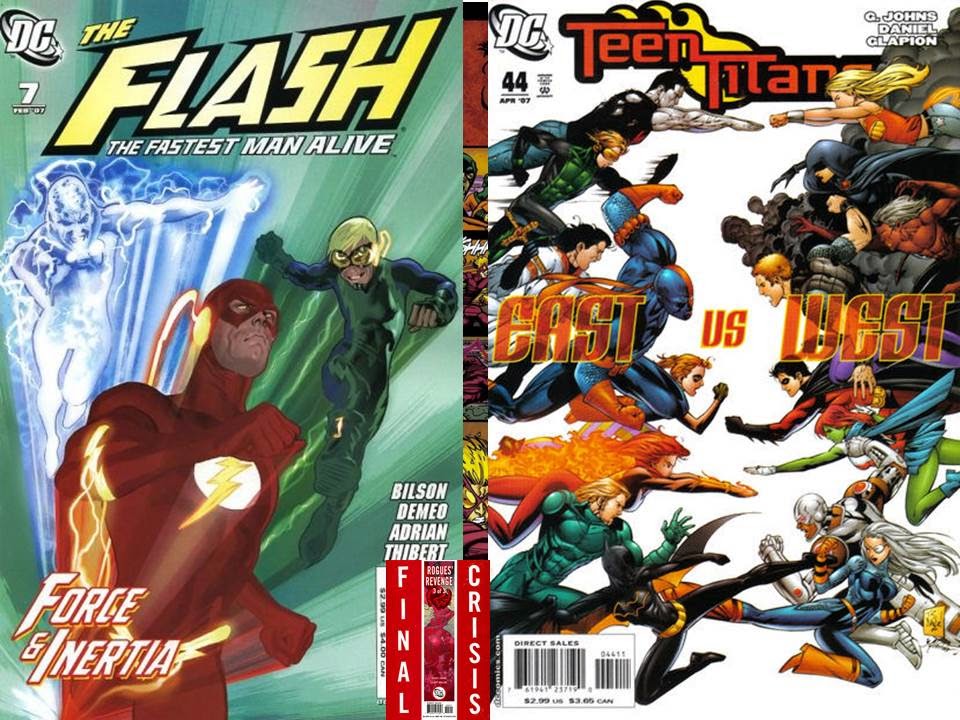 Inertia returned after Bart was artificially aged up and taking over the role of the Flash, finding himself without super-speed and having to take Velocity 9 to fight, facing off with Bart's Flash in Flash: The Fastest Man Alive #5-8, and then #10-13 (over 2007, stopping between to join Deathstroke's Titans East in Teen Titans #43-46), with, in Flash: The Fastest Man Alive #13, Inertia was able to do something no evil speedster was ever able before, to kill Bart's Flash (with Wally stopping Inertia quite literally in All-Flash #1).

Still, the angry little man was revived yet again, this time by Zoom during the course of Final Crisis: Rogue's Revenge, where Inertia took on the mantle of "Kid Zoom" and removed Zoom's powers...before the Rogue's got to Kid Zoom, ending his run. 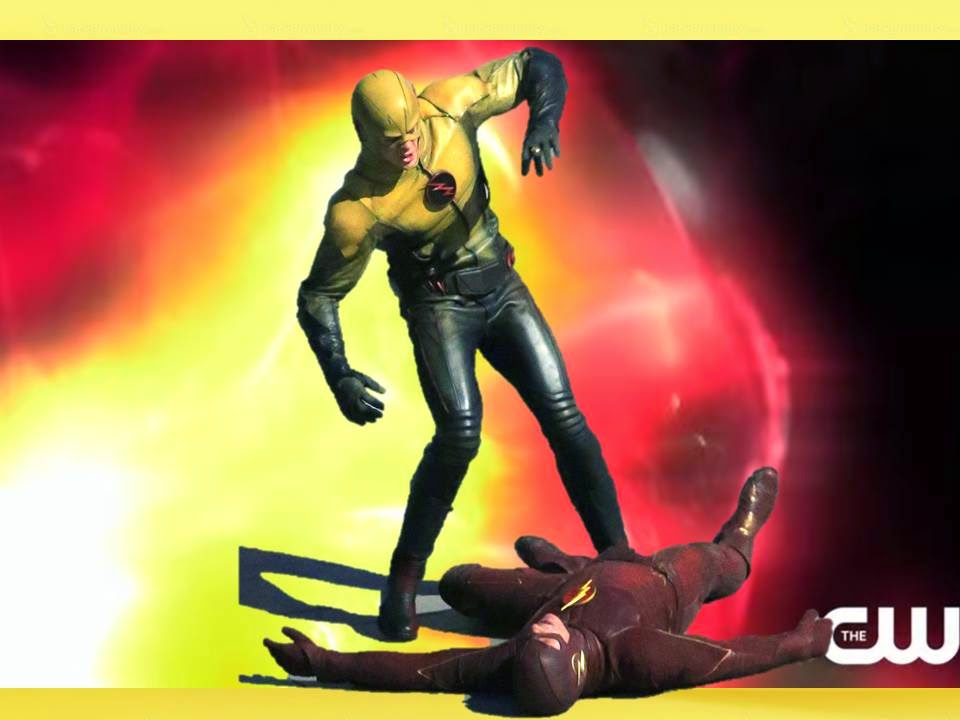 As long as there are Flashes, there will be rivals to those Flashes, running in reverse, even when the Flash transfers mediums to television like on the CW!