With the Hobbit: The Battle of Five Armies due at the theatres, figured it was time to talk about another hero on a quest. 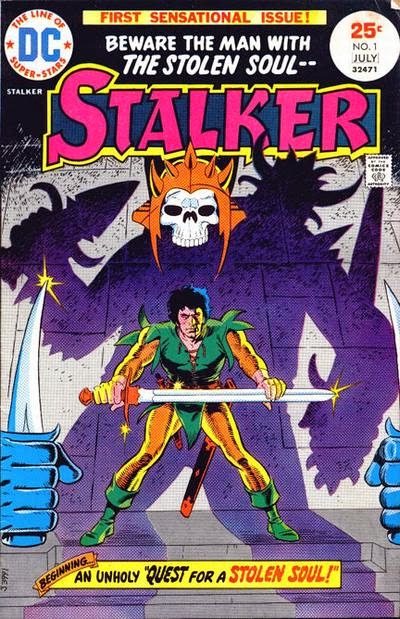 This hero was on a “Quest for his stolen soul!”. (It even says so on the cover, and is the title of the issue…talk about truth in advertising!). Sadly, this quest was due to be short…or not, depending on your point of view…it was certainly a long journey for Stalker, over many lands, and many times as well!

Stalker #1 was cover dated June-July, 1975, and featured as its hero, the Stalker, a peasant boy who wanted more out of life, but kept getting nothing. So, he made a deal with the demon lord, Dgrth, to become the ultimate warrior, able to handle any weapon…and all it cost the lad was his soul.

Stalker felt cheated by the deal, and while planning revenge on the queen who wronged him, went out to find Dgrth to reclaim his soul. The letter’s page even provided a map of the world of the Stalker. 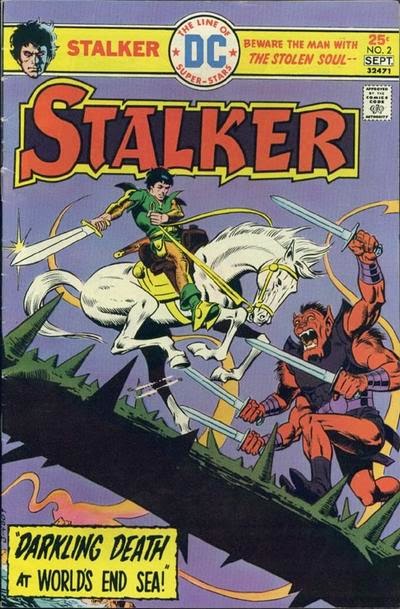 With his second issue (cover dated August-September, 1975), Stalker went looking for Dgrth and faced a “Darkling Death at the World’s End Sea!”.

Stalker confronted the priests of Dgrth, and freeing a slave maiden, though this didn’t turn out as planned for either side. It ended with the soulless one leaving behind his new companion, and heading out to the Burning Isle to find the passage to confront Dgrth in hell. 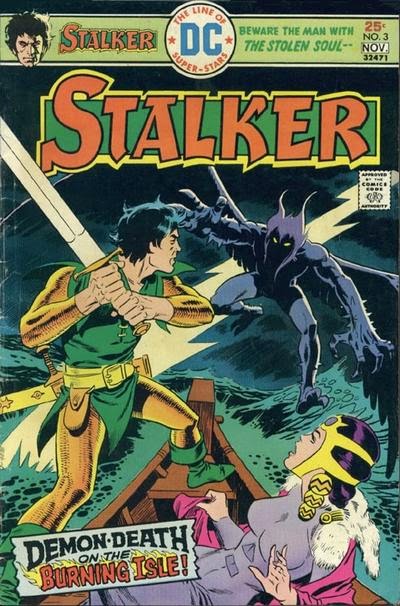 But, Stalker had to get to the island and survive the struggle there…and he did that in issue #3 (October-November, 1975), where he confronted the inhabitants of the island, including Srani (she who is on the cover).

Eventually, Stalker got past the trials of the isle, and was ready to confront the war god, Dgrth….

Here Stalker would “Invade The Inferno” that was Dgrth’s home, and face the evil being that had taken his soul. The story changed (slightly) from straight out sword and sorcery to adding a little science fiction, and definitely established this was not on Earth (though that was relatively obvious from the first issue on…). 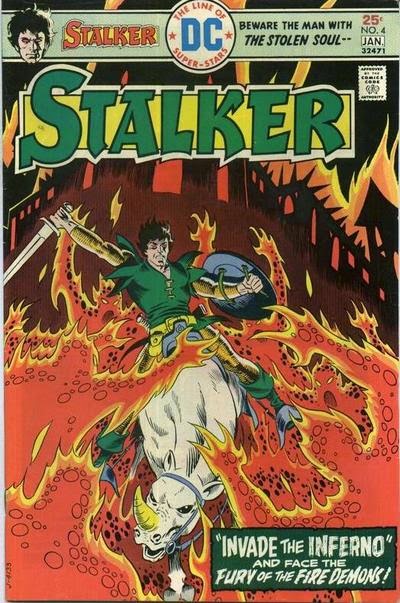 Here, Stalker’s quest changed a little, as he now worked to end Dgrth’s hold on the world….and, had the series continued we may have seen more of this new development.

Sadly, the fourth issue was Stalker’s final one. At least the series maintained one writer (Paul Levitz), and one artist (Steve Ditko) and one inker (Wally Wood). The combination of Ditko (known for his angular characters and hard faced heroes) and Wood (known for softer, curved art with beautiful women) helped to make this a unique series, and an artistic treat, as well as having a gripping story. The four issues were even reprinted in the first Steve Ditko Omnibus (along with Shade the Changing Man and a little more) in 2001. 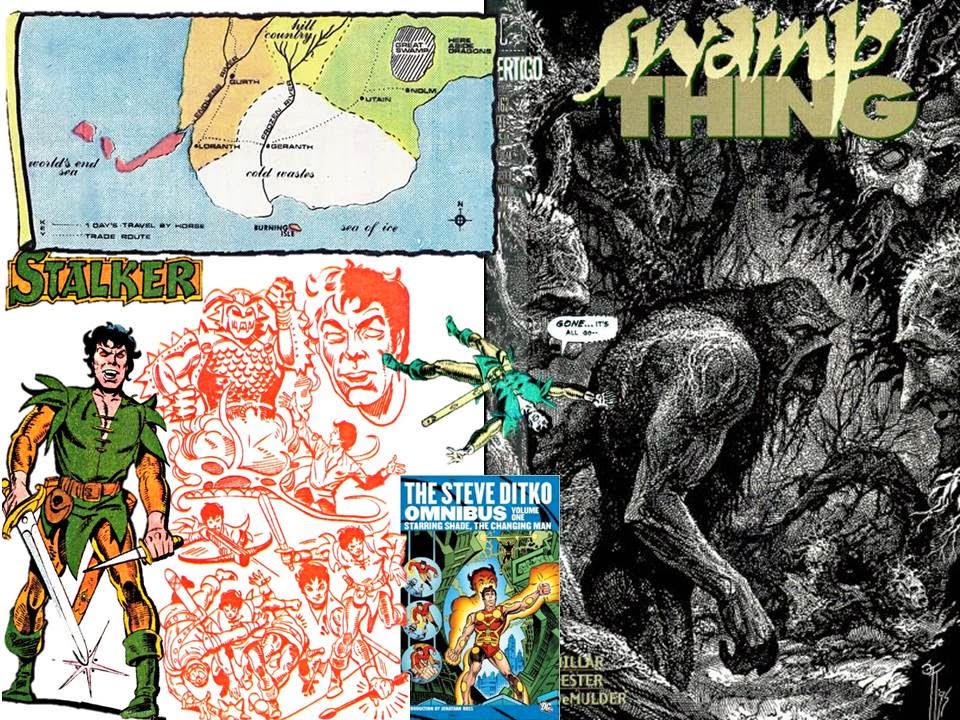 Still, even during the series, there were plans to take Stalker further across his world (issue #2‘s lettercol mentioned that Stalker should be headed to the swampland in “the Great Swamp” in the “never happened” issue #7). Ironic, as the next place Stalker appeared was in Swamp Thing #163 (February, 1996), though it was for barely a panel, along with the sword and science Starfire (herself having 8 issues in the 1970s, and pre-dating the New Teen Titans‘ Starfire), Claw the Unconquered (12 issues in the 1970s) and Nightmaster (who was in three issues of Showcase…and may have dreamed the whole thing). 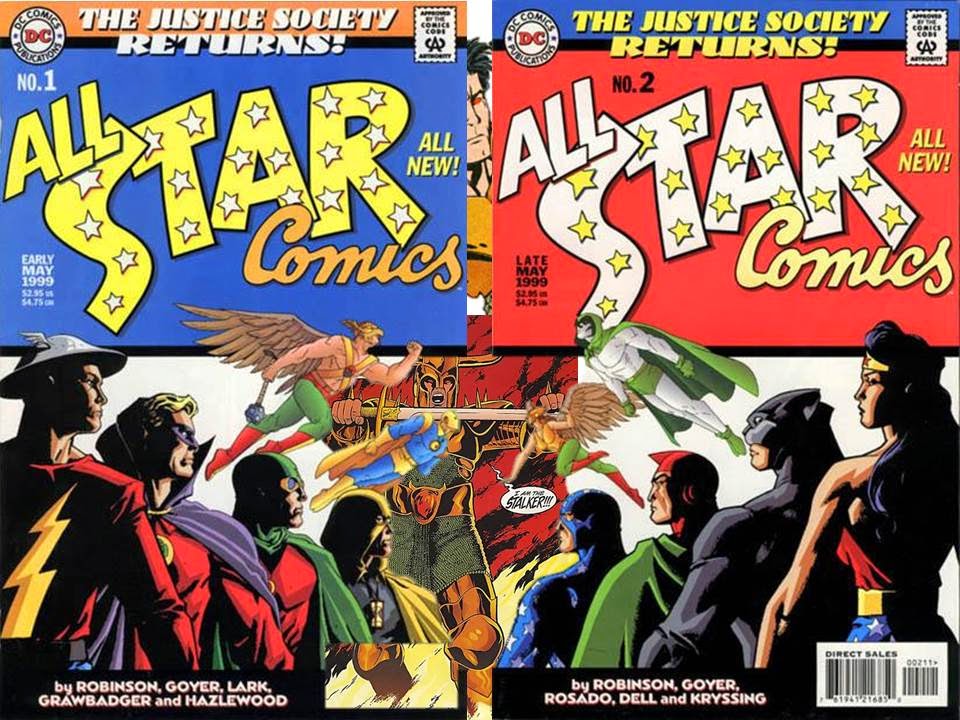 Stalker even came back again…towards the end of World War II, and faced the Justice Society of America when summoned by a cabal of Nazis who were looking for a magical force to fight the Americans (and got more than they bargained for, getting a Stalker who had given up his heroic pretense, and instead had decided the best way to end evil, was to end all life!

The JSA (and a few friends) barely got out of this one in All-Star Comics in May, 1999 written by James Robinson! Sadly, Stalker only appeared in the two main issues, and didn’t make the cover of either of the core issues (or the collected tradepaperback., the Justice Society Returns). 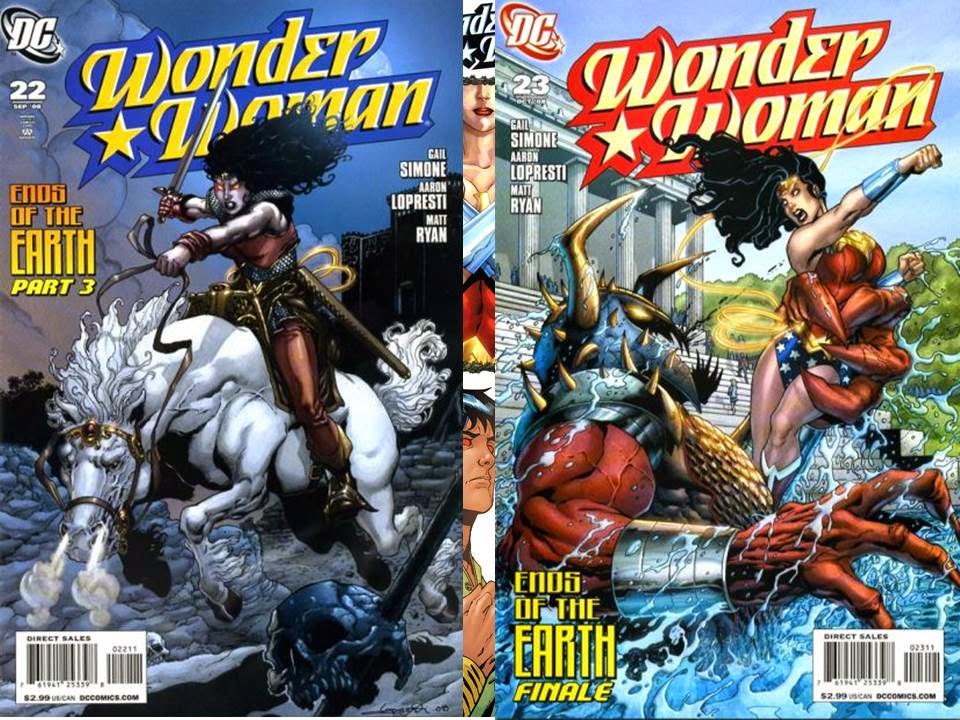 Stalker returned one more time, in four issues of Wonder Woman, #20-23 (2008, by Gail Simone and Aaron Lopresti), along with Claw the Unconquered and Beowulf (the ancient hero having 6 DC issues over 1975 and 1976 as well in DC’s fantasy explosion), to face an attempted invasion of Earth by D’Grth (giving D’Grth a cover, finally, fighting Diana on the last issue of the series, though Stalker never made the cover of the “Ends Of The Earth”; Dgrth had also gained an apostrophe in his name). Likely, this might have been a Stalker earlier in his life, as he still had hope, and worked with the other heroes (still lacking a soul, though…and these issues were collected in the Wonder Woman Tradepaperback, Ends of the Earth). Stalker left these heroes with a mad female oracle witch queen, still searching for a soul. 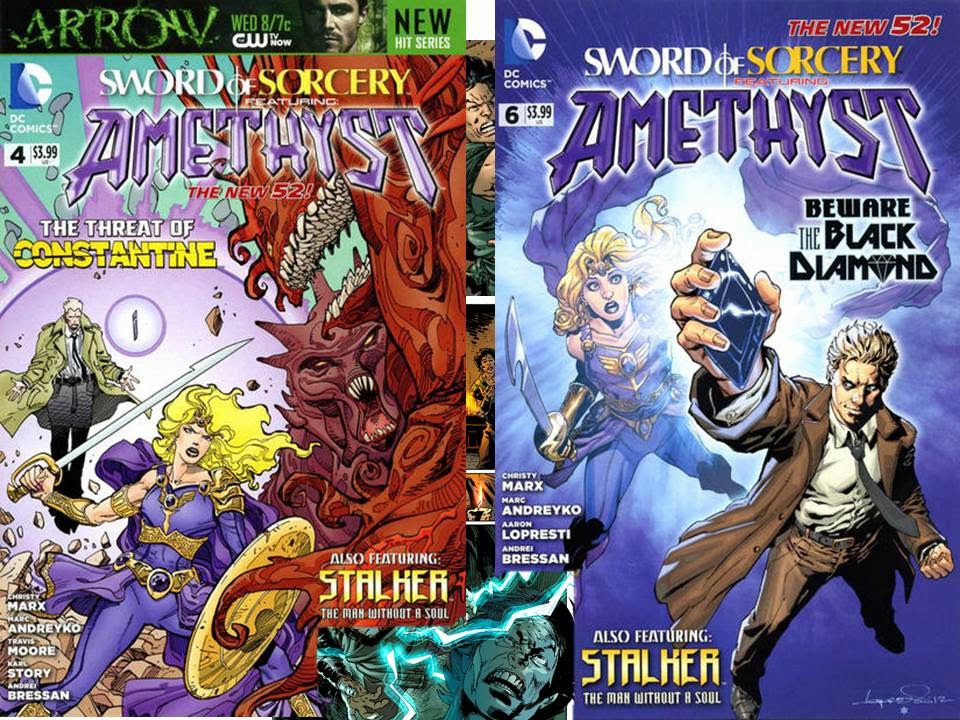 Stalker even returns in the New 52, getting a back-up feature in Sword and Sorcery, starting with the fourth issue, and ending in the 7th (still getting no covers, as they featured Ametyst and Constantine....in this small series by Marc Andreyko and Andrei Bressen).

Seems four is the number of the Stalker, and may give him more luck starting his quest this time (if not a soul to enjoy his return….).
Posted by Dave's Not Here Comic Blog at 6:00 AM