Taking a Shot at Christmas 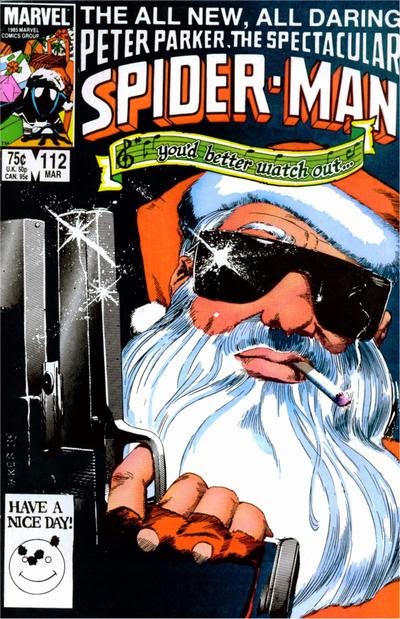 This ain’t your father’s Father Christmas.

Back in the later 1980s (and the 1990s), comics took a turn to the more violent.  The higher the body count, the better the book would sell.   Even the idea of “ultra-violence” would increase sales on a book (even when it was just a well-told, well-drawn story with nothing particularly nasty in it).  In 1985, Peter David and Mark Beachum presented us with Peter Parker the Spectacular Spider-Man #112.

Now, this story happens around the time of Secret Wars II crossovers, the Terminator movie and, of course, Christmas.  For the past few issues, Peter David had kids in Peter Parker‘s neighborhood seeing a mysterious figure in red around houses with bags full of goodies, and paid off that story thread here.   It was a thief, who had the idea of dressing as Santa Claus to confuse any kids who might see him wandering around at night, and during the course of his normal life, Peter Parker‘s alter ego, the Spectacular Spider-Man had to stop him.

NOTHING like the cover was actually in the issue (drawn by Kyle Baker), but it is a striking cover, isn’t it?  And, Santa got to participate in the violence of the time even more as time went by.  Ironic that some of the various parts of Santa‘s mythology lend themselves to a more violent genre?

“You Better Watch Out” indeed!
Posted by Dave's Not Here Comic Blog at 6:47 AM