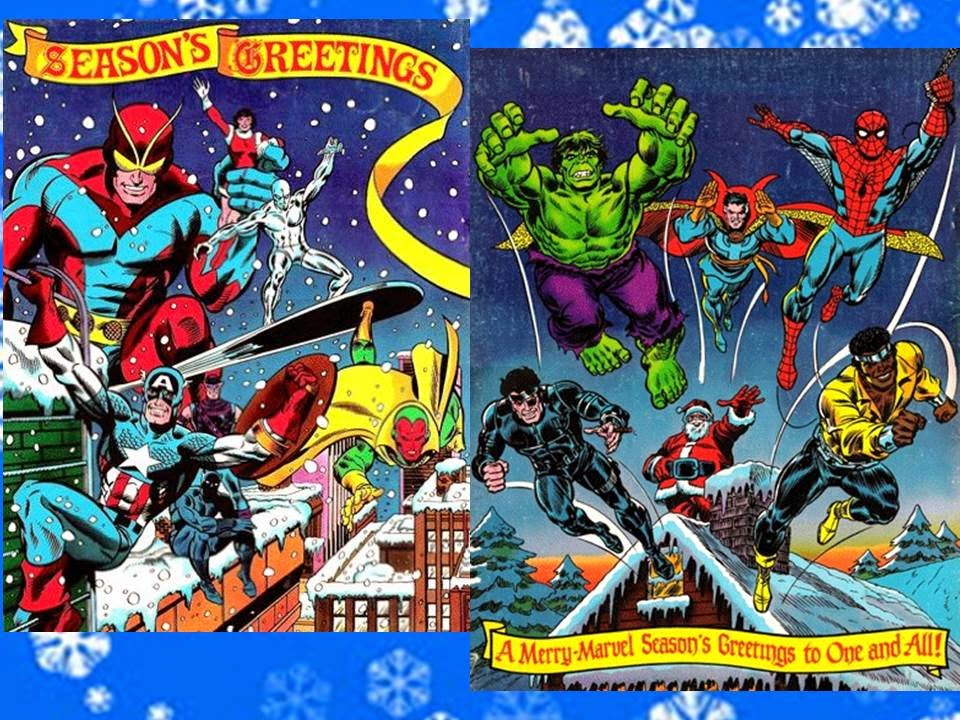 Back in the day, Marvel had over sized Treasury comics, having some new stories, but mostly reprints.

Marvel did three holiday themed collections, and here they are for your enjoyment! 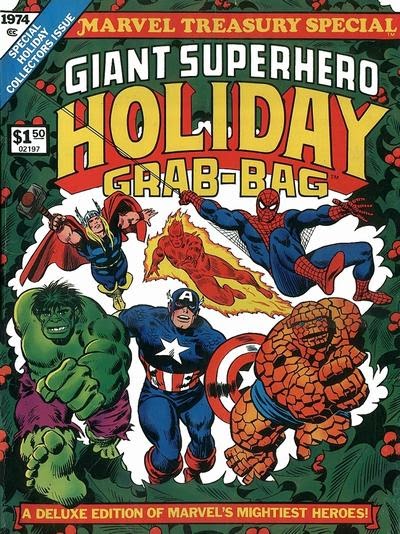 The first of Marvel's three Christmas specials was the Marvel Treasury Special, Giant Superhero Holiday Grab-Bag of 1974 and a cover by John Buscema and John Romita.

This collection contained Marvel Team-Up #1 (March, 1972) by Roy Thomas and Ross Andru, and had Spider-Man and the Human Torch facing the Sandman in "Have Yourself A Sandman Little Christmas!"; Daredevil gets a present of his new all-red suit and faces an angry Atlantean "In Mortal Combat With...The Sub-Mariner!" in a story by Stan Lee and Wally Wood from Daredevil #7 (April, 1965); 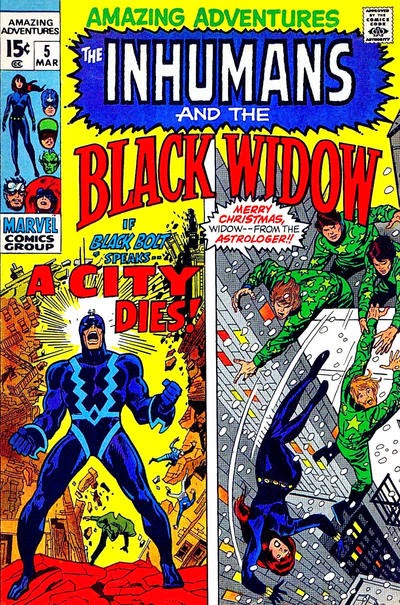 Black Widow faces off against the Astrologer in "...And To All A Good Night" by Roy Thomas and Gene Colan from Amazing Adventures #5 (March, 1971) and most of the Marvel Universe comes together for the Hulk to face the Thing (with the rest of the Avengers and Fantastic Four around), with Fantastic Four #25 and 26 from 1964 by Stan Lee and Jack Kirby, because nothing says "Merry Christmas" like a fist to the face (well, at least that's how it goes in the Mighty Marvel world!). 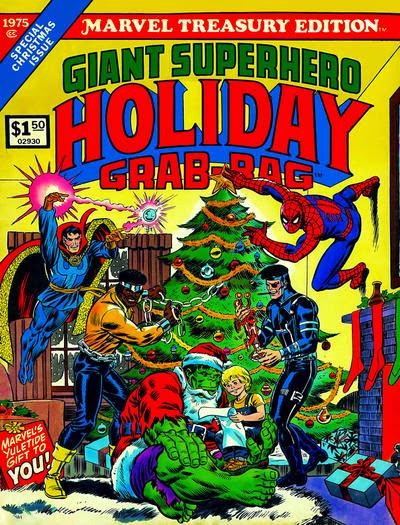 The second of Marvel's three Christmas specials was 1975's Marvel Treasury Edition #8 with a front cover by John Romita.

This collection contains the stories of "Twas The Night Before Christmas" from Nick Fury, Agent of SHIELD #10 (March, 1969) by Gary Friedrich and Frank Springer, with Nick Fury facing a grinch to his holiday fun in the form of the Hate-Monger; Spider-Man finds the holidays can make you crazy (though Mysterio might be helping) in "Spider-Man Goes Mad" from Amazing Spider-Man #24 (May, 1965) by Stan Lee and Steve Ditko; it's not a sweet Christmas for Luke Cage as he faces a mad bomber named Marley in "Jingle Bombs" from Hero For Hire #7 (March, 1973) by Steve Englehart and George Tuska; 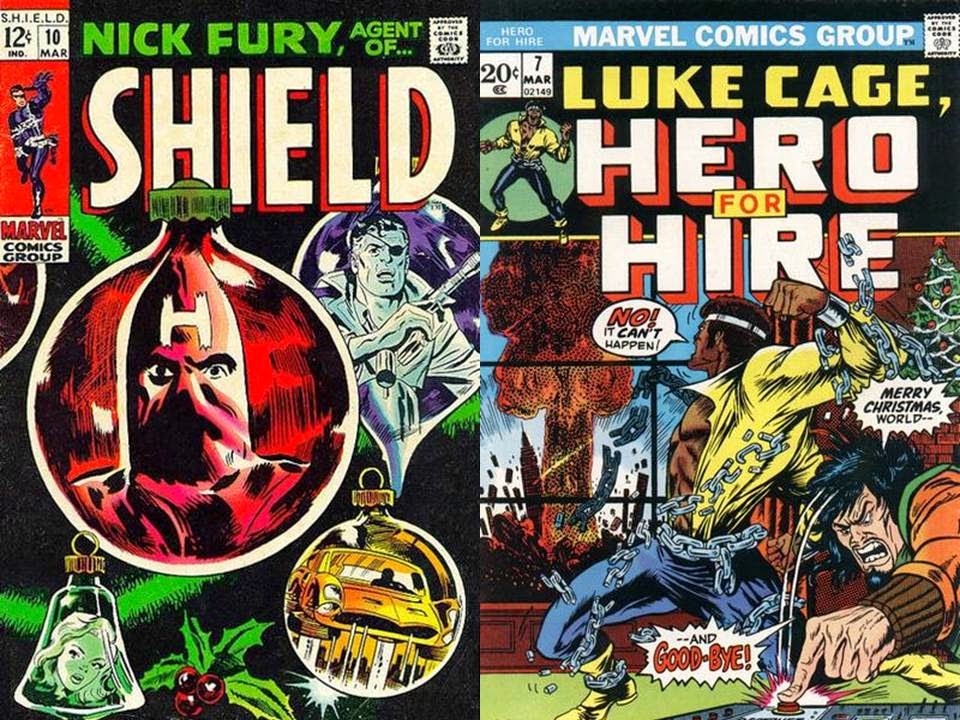 the Hulk finds out that "Heaven Is A Very Small Place!" in a story by Roy Thomas and and Herb Trimpe from the Incredible Hulk #147 (January, 1972), and Dr. Strange faces Eternity on New Year's Eve in the Roy Thomas/Gene Colan story from Doctor Strange #180 (May, 1969). 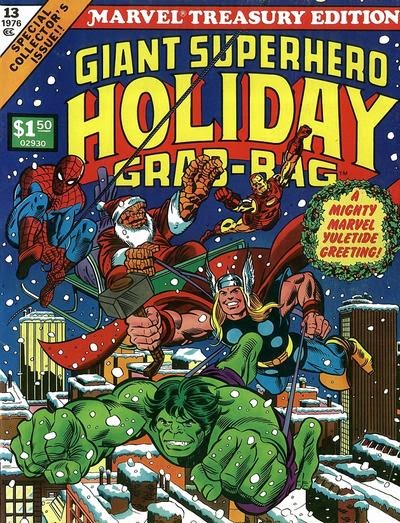 The third of Marvel's three Christmas specials was 1976's Marvel Treasury Edition #13, with a front cover by Gil Kane and Joe Sinnott.

Collected here for your yuletide enjoyment...are the stories by Gerry Conway and Gil Kane from Marvel Team-Up #8 (January, 1973) with the Spider-Man and the Thing getting involved in a battle between the Mad Thinker and the Puppet Master (as well as some of the family problems between Ben's blind girl friend, Alicia, and her father, who happens to be the Puppet Master) in "As Those Who Will Not See!"; seeing that "Even An Android Can Cry" in a story by Roy Thomas and John Buscema from Avengers #58 (November, 1968) because the Vision joined the Avengers; the Hulk and the Silver Surfer have a battle like in-laws in "He Who Strikes the Silver Surfer" from Tales To Astonish #93 (July, 1967) by Stan Lee and Marie Severin; Daredevil fights with the second Ox of the Enforcers in "Once Upon A Time...The Ox!" from Daredevil #86 (April, 1972) by Gerry Conway and Gene Colan; and all these stories are sandwiched between a new Fantastic Four/Avengers story (with a few extra guests like the Champions, Daredevil and the Defenders) by Roger Stern and George Tuska! 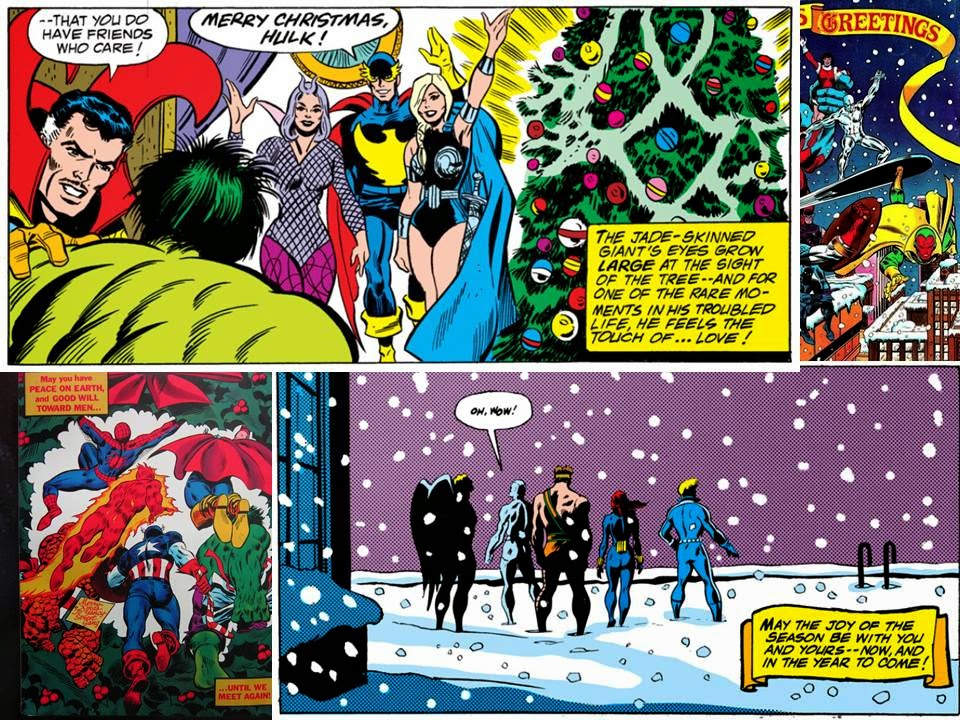 Makes all this better than holiday leftovers!  May you and yours have a Merry Christmas and a Happy New Year!