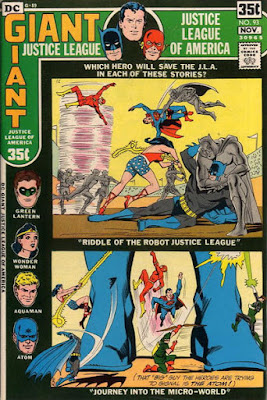 While Ross Andru and Dick Giordano did a good job on the cover (mostly recreating the original covers, but making sure Batman and Superman were a little more visible), still, it was a last gasp, with a giant that wasn't so giant after all.


But, let's take a look at the two reprints contained within....

...after all, they were exciting events in the history of the Justice League of America! 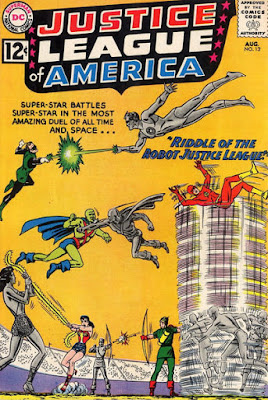 Murphy Anderson gave readers the original cover to Justice League of America #13 (August, 1962), for the story of "The Riddle Of The Robot Justice League" by Gardner Fox, Mike Sekowsky and Bernard Sachs.  What a story it was!

The individual Justice Leaguers are transported from their normal lives (surprising friends like Jimmy Olsen, Tom Kalmaku and Speedy), and end up on the planet Erislane, where they will be forced to fight to save the universe.  The scientists of the universe of Skarn would steal the life-force of another universe as theirs died out, after they had robot duplicates of that universe's heroes fight against their counterparts.  As Skarn had no water, no duplicate Aquaman was made, so he ended up as coach to the other JLAers, which, ended up saving the day...proving Aquaman's importance to the JLA (as one day, he might lead a group himself, with fellow teammates like Martian Manhunter, Elongated Man, Zatanna, Vixen, Vibe, Steel and Gypsy!).

This was also the last issue before the JLA added Atom as a member (as seen in the 4th JLA Giant)...and he proved to be the "big man" of the second story in this issue! 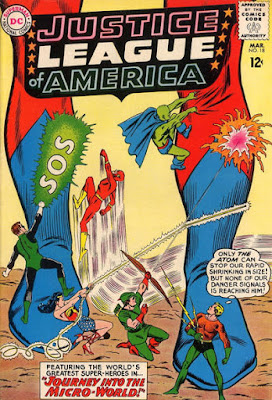 The second reprint in this issue is from Justice League of America #18 (March, 1963), with an original cover by Mike Sekowsky and Murphy Anderson, with newest member, the Atom, dominating the cover (though all we see are his feet), as the team takes a "Journey Into The Micro-World" as told by Gardner Fox, Mike Sekowsky and Bernard Sachs.

It was a JLA meeting like any other, until the JLA team (except honorary member Snapper Carr) started to shrink out of existence....ending up in the subatomic world of Starzl, where the inhabitants were being killed by radiation given off by their three android protectors of land, sea and air; Terrane, Ocana and Etheran.  The team had problems defeating their invincible foes, at least until they realized why, and summoned Snapper, without telling him of the menace he faced, which allowed him to defeat them (letting Snapper, not Atom, be the "big man" of this issue, no matter the cover). 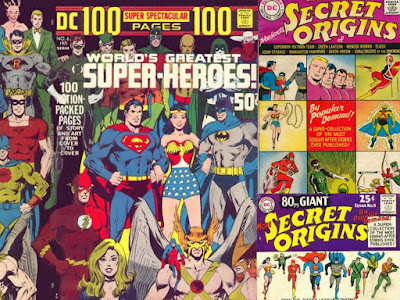 While this was the last of the giant reprints, where there were only reprints in the issue, the Justice League of America would have 100 page giants that contained new material as well as reprints, and there would be Super Spectaculars to reprint Justice League of America issues as well (and later, Treasuries, Digests, Archives, Omnibusi, Tradepaperbacks and more, all following the tradition stared by one little Secret Origins issue from 1961!).