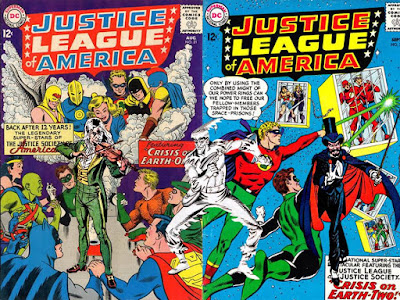 The villains known as the Crime Champions had beginnings on two Earths, and finished their first team up in Justice League of America #22 (September, 1963) with the "Crisis On Earth-Two" by Gardner Fox, Mike Sekowsky and Bernard Sachs. 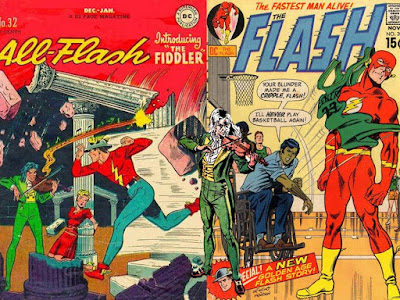 The Fiddler first appeared in All-Flash #32 (December-January, 1947/1948 by Robert Kanigher, Lee Elias and Moe Worthman), the last of the All-Flash comics of the Golden Age, using his magical musical talents against Jay Garrick, the Golden Age Flash, in "Duet Of Danger".  The Fiddler, also known as Isaac Bowen, would return for a couple of solo battles against the Flash in the Golden Age, as well as being a part of the Wizard's second Injustice Society of the World, before being one of three villains (the Thinker and the Shade) to face both Flashes (Jay and Barry Allen) in the Flash #123 (September, 1961), just before joining the Crime Champions.  After the first battle with the JLA and JSA, Fiddler returned first for a solo battle with Jay Garrick in Flash #201 (November, 1970), then was a part of the Injustice Society of the World (and its update, Injustice, Unlimited, to face Infinity, Inc.) for most of his returns after (though he did stop by to face the Teen Titans once), at least until meeting his final fate with the Secret Six. 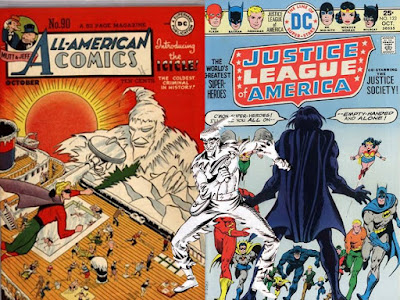 Joar Mahkent first appeared facing the Golden Age Green Lantern in All-American Comics #90 (October, 1947 by Robert Kanigher, Irwin Hasen and John Belfi) as "The Icicle".  The Icicle returned twice in the Golden Age (the second time in the Injustice Society of the World in All-Star Comics #41 of June-July, 1948, working with the Fiddler, the Wizard and the Sportsmaster and the Huntress as well), before throwing his cold gun in to help out the Crime Champions.  The Icicle was a loyal member of the ISW, making all his appearances after the meeting with the Crime Champions as a member of the ISW (starting with Justice League of America #123 of October, 1975, except when he worked with the Crime Champions again, or faced his end during the Crisis On Infinite Earths).  But, the Icicle legacy lived on with his son taking over the name (and he had ice powers of his own!). 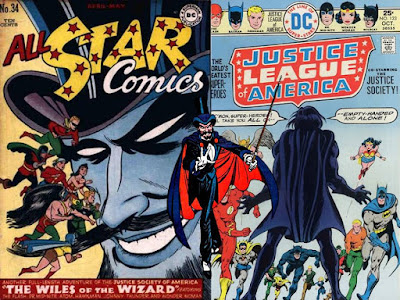 The Wizard premiered battling the entire Justice Society of America in All-Star Comics #34 (April-May, 1947 by Gardner Fox and the hosts of artists including Irwin Hasen, Joe Kubert, Frank Harry, Lee Elias, Harry Lampert and Paul Reinman), having the JSA face "The Wiles Of The Wizard", posing as W. I. Zard, to trick the JSA, offering them money to capture villains.  The Wizard returned twice during the Golden Age, working with the Injustice Society of the World in All-Star Comics #37 (and Vandal Savage and Per Degaton, among others), and #41, before joining the Crime Champions (though later historical inserts add the Wizard as the man who helped the Golden Age Superman marry Lois Lane, and who cursed the young Dinah Laurel Lance, giving her what became the "Canary Cry" when she became the second Black Canary).  After using his magical powers to work with the Crime Champions, Wizard also returned as a member of the Injustice Society of the World to face the JLA and JSA in Justice League of America #123 of October, 1975), but the Wizard had bigger aspirations, also working with the Secret Society of Super-Villains and later, Injustice, Unlimited, to continue to menace all generations of heroes. 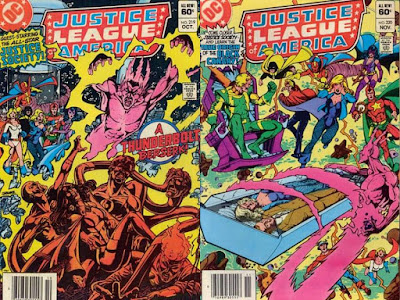 The Crime Champions never quite took hold (likely having too many bosses, as Chronos also led groups of villains over time), and only returned one more time, in Justice League of America #219 and #220 (October and November, 1983) where they worked with the evil Earth-1 version of Johnny Thunder (and learned of the history of the two Black Canaries), though it was with the second version of Dr. Alchemy.  Still, the Crime Champions were a building block of villainy, allowing for larger groups of villains to form in the future.
Posted by Dave's Not Here Comic Blog at 4:11 AM