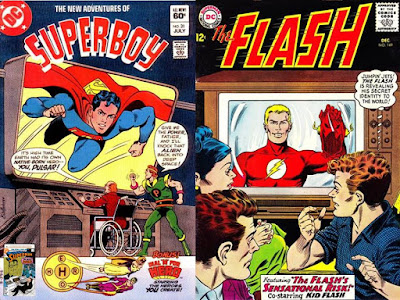 Continuing a look at various DC characters who have made the transition from comics to television screens....

....this time around, finishing off the major characters who made it to networks in the 20th Century, with Superboy, Flash and Lois Lane and Clark Kent! 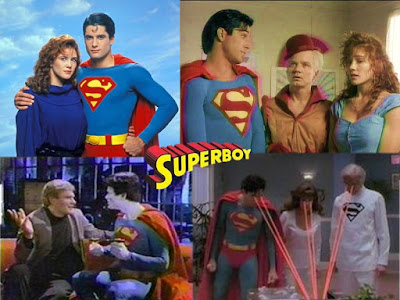 Superboy (also called the New Adventures of Superboy) came about due to syndication deals,with a little help from the Superman movies (though setting the stage a little earlier than that).  The first episode premiered on October 8th, 1988, with John Haymes Newton as Clark Kent/Superboy and Stacy Haiduk as Lana Lang, placing Clark and Lana at college (with Lex Luthor as a competing student).  This changed with the second season, with Gerard Christopher taking over as Clark/Superboy (but Stacy staying on as Lana) until the show ended in after its fourth season.  Along the way, they did revisit Krypton a little, and brought a few other villains to life, including Metallo, Bizarro and Mr. Mxyzptlk, as well as versions of Superboy foes Yellow Peri and the Kryptonite Kid (and even a few vampires, werewolves and magi along the way, as well as mad scientists, gangsters and a few losses of powers....including in the last of 100 half an hour episodes, with "Rites Of Passage, Part 2", which aired on May 17th, 1992. 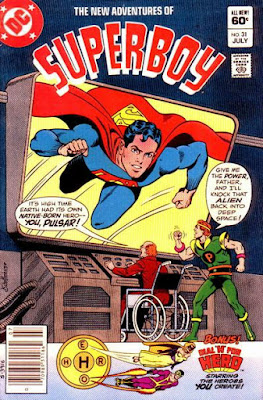 Superboy, in the comics, was phased out at the time (thanks to a change in his history thanks to the Crisis On Infinite Earths and the Man of Steel mini-series....a little more on this below), but just before the TV show, Superboy had been kicked out of his own title by the Legion of Super-Heroes, then got a title all his own, called The New Adventures of Superboy, which featured the adventures of the boy who would grow up to be Superman, in his town of Smallville, being a super-hero and keeping the world safe.  The New Adventures of Superboy #31 (July, 1982) was an average tale of that time, entitled "The Main Event: Smallville, U.S.A" by Gary Cohn, Dan Mishkin, Kurt Schaffenberger and Dave Hunt, with Superboy facing off against Pulsar, a super-villain created by his father, Robert Altus Sr., by stealing Superboy's power for his son, and Superboy fighting him to remain who he is. 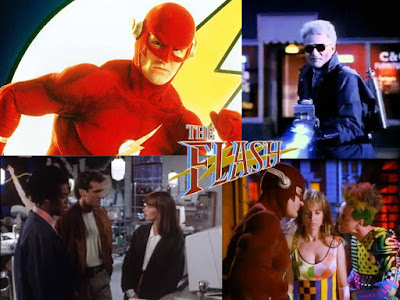 Flash was the first DC character that had his own live action show (who wasn't one of DC's trinity of Superman, Batman and Wonder Woman), that started with a two hour pilot on September 20th, 1990, with Barry Allen (played by John Wesley Shipp) being struck by lightning, and, with the help of S.T.A.R. Labs scientist, Tina McGee (played by Amanda Pays), becomes the Flash, using his speed to protect Central City from criminals and disasters.  The show eventually added super-villains (most notably Captain Cold, Mirror Master, and for two episodes, The Trickster), but sadly, it only lasted one season, ending with after an additional  21 one hour episodes, with "The Trial of The Trickster" (dealing with Mark Hamill's Trickster....and how Central City came to accept the Flash as its hero) on May 18th, 1991. 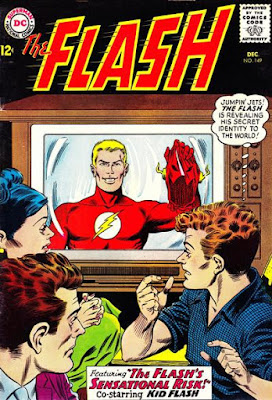 The Flash TV show did deal with Barry Allen as the Flash, but thanks to events that happened during the Crisis On Infinite Earths, Barry wasn't around in the comics at this time, with Wally West (who was Flash's sidekick, Kid Flash), taking over as the Flash (and, at least in the early issues of Wally's Flash series in the 1980s, working with Tina McGee of S.T.A.R. Labs to focus his speed).  Wally had been helping Barry for years before this, and Barry used a little bit of super-speed trickery in "The Flash's Sensational Risk" in Flash #149 (December, 1964, by John Broome, Carmine Infantino and Joe Giella), with Wally losing his memory and Barry pulling a fast one to help him remember (and defeat invading extra-dimensional invaders). 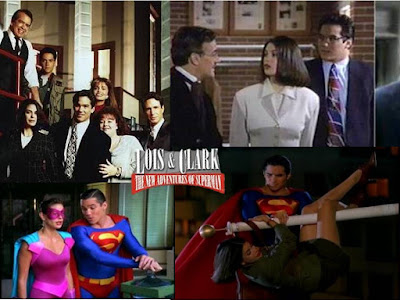 Superman came back to television on September 12th, 1993, with Lois and Clark: The New Adventures Of Superman, focusing on the relationship of Ms. Lane (Teri Hatcher) and Mr. Kent (Dean Cain)  and the staff of the Daily Planet (which included Perry White, Jimmy Olsen and Cat Grant) and Clark's still living Smallville parents, and corporate headhunter Lex Luthor, instead of entirely on super-heroics (though Clark did throw on the Superman clothes for a bit in the episodes).  Later seasons did have other foes, such as the Prankster, the Toyman, Metallo, Mr. Mxyzptlk, Ugly Mannheim (and Intergang), Deathstroke and even their own villain, time-travelling Tempus, as well as having Lois and Clark get married (which was reflected immediately in the comics).  The show ended with "The Family Hour", the last of its 87 one hour episodes on June 14, 1997 (dealing with the idea of giving the couple a child...). 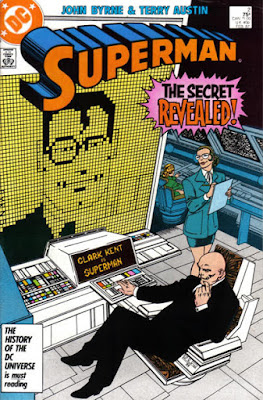 Superman was undergoing changes, taking him back to his basics (thanks to DC realigning its history during the Crisis On Infinite Earths), with the Man of Steel limited series defining Superman as the sole survivor of Krypton, Lois and Clark having the start of an office romance at the Daily Planet, and Luthor being an evil corporate businessman in society instead of an evil scientist on the run as been previously established.  Luthor used his Lexcorp corporate resources in Superman #2 (February, 1987, by John Byrne and Terry Austin), figuring out that Clark Kent was Superman in "The Secret Revealed"!  Yet, Luthor, being an ego-maniac couldn't believe someone with the powers of Superman would ever hide his powers behind another identity!


Hopefully, all this gives you an idea how the comics influence the television shows (and how the shows return their influence on the comics).  All these shows helped ready television audiences of the 21st Century to be ready for more shows, like Birds of Prey, Smallville, the Human Target, Constantine, Gotham, Arrow, the Flash, Supergirl and the Legends of Tomorrow!