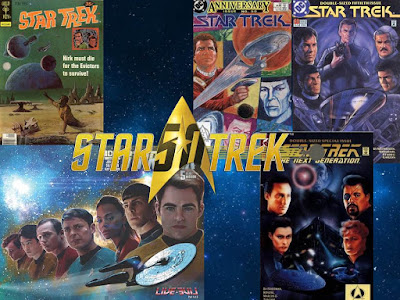 These are the voyages of the starship Enterprise.

Its five-year mission: to explore strange new worlds; to seek out new life and new civilizations;

...to boldly go where no man has gone before."

50 years ago, this started Gene Roddenberry's adventure....and it's continued on TV, in movies....and in comic books!

Let's boldly look back at the comic book history of Star Trek! 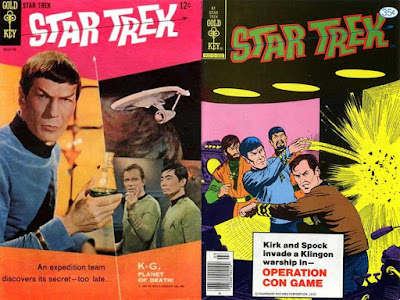 Gold Key was the first company to make Star Trek comics, based off of the only series that was available at the time, starting during the original series run with Star Trek #1 in July, 1967, and lasting 61 issues until March, 1979.

For a look at all the classic Star Trek Gold Key covers, and how they were once collected, try here! 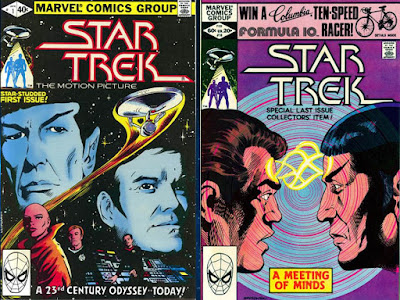 Star Trek returned in movie form in 1979, and Marvel had it's first Star Trek #1 in April, 1980, with an adaptation of Star Trek: The Motion Picture over its first 3 issues, then 15 issues of stories to follow, ending with Star Trek #18 (February, 1982).  One of the problems with this series was that Marvel only optioned the rights to the movie, so they were limited in characters and mythology of what they could present, and this series is covered here. 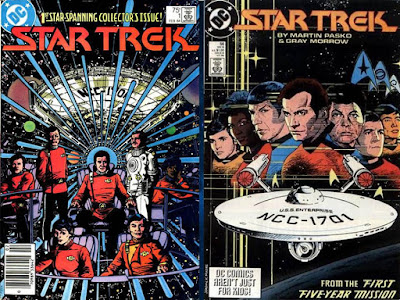 DC Comics boldly went into Star Trek, between Star Trek II: The Wrath of Khan and Star Trek III: The Search for Spock.   Better still, DC got the rights to all the Star Trek (TV, movies and animated characters even), so they were able to present the entirety of the Star Trek universe at the time (all 79 episodes, all the animated shows and the first two movies, as well as adapting Star Trek movies up to and including Star Trek: Generations, featuring the next generation of Star Trek, Star Trek: The Next Generation), starting with their Star Trek #1 in February, 1984.  The original DC run would last 56 issues (until November, 1988, and a look at a few of their special issues here), along with 3 Annuals, 2 issues of a Who's Who In Star Trek and adaptations of Star Trek III: The Search for Spock and Star Trek IV: The Voyage Home.

DC Comics: The Next Generation 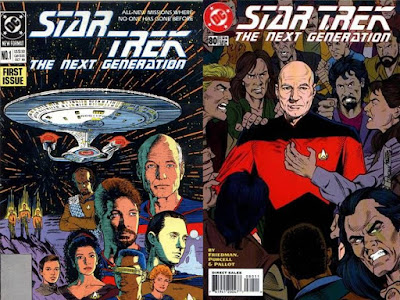 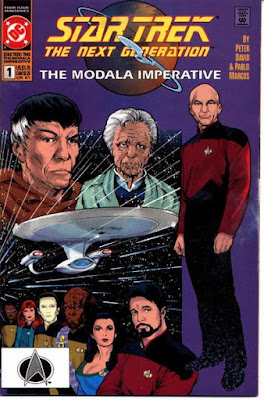 
Spock, Bones and even Scotty got checked again in later Next Generation era stories...

....as these characters survived well past the first five year mission, and kept boldly going in the Star Trek universe....and expanding beyond Gene Roddenberry's vision, even creating new series after Gene had passed away. 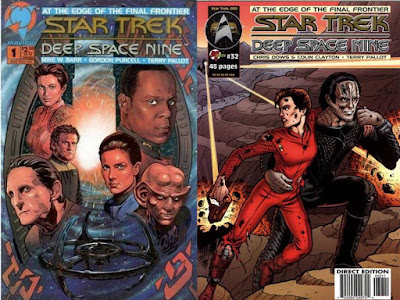 Star Trek: Deep Space Nine was that first post-Roddenberry series, and was set on a space station in the land of Bajor, and had it's first run at comic book newcomer company, Malibu, with 32 issues (and a large number of specials) starting in August, 1993, and ending with Star Trek: Deep Space Nine #32 in January, 1996 (Malibu was also fond of cover enhancements, at least for issue #1...). 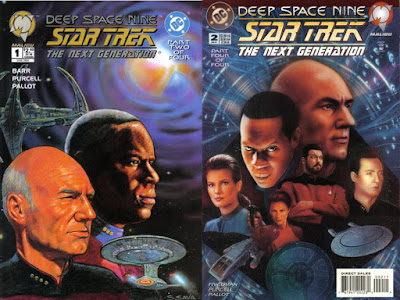 Even though the two series were at separate companies, a deal was worked out where both DC and Malibu would make 2 issues of a Next Generation/Deep Space Nine crossover, making a four issue mini-series where these two crews met and worked together....with DC putting out parts 1 and 4 cover dated December, 1994 and January, 1995, and Malibu putting out parts two and three cover dated October and November, 1994. 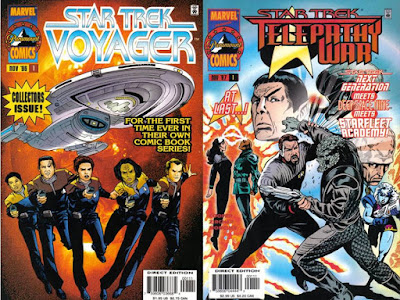 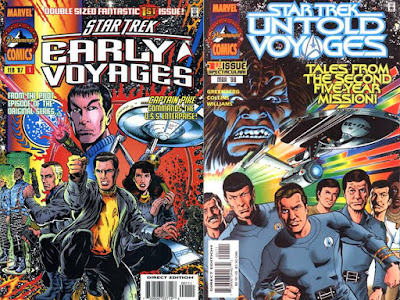 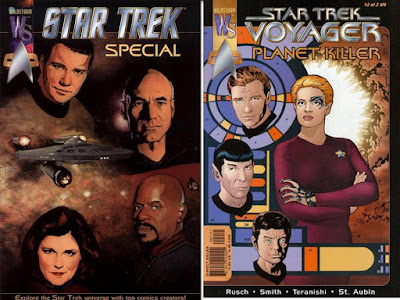 DC got Star Trek back into comic books briefly, from April, 2000 to September, 2002 to doing the work as mini-series and specials under its Wildstorm brand, and covered all four Star Trek properties of the time as well with a freedom not enjoyed in the comics for a while...but limited by only being short run series and one-shots, insuring there will be few issues with #50 on a Star Trek cover. 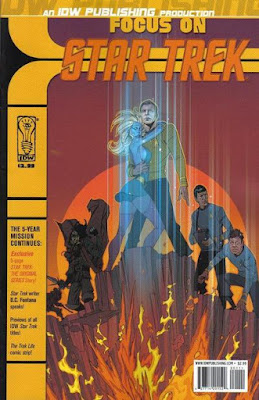 Star Trek has even had a few odd crossovers with other worlds, like Planet of the Apes during IDW's run on Star Trek.

IDW focuses on the original cast, but has gone beyond that, following characters from the original series in places readers hadn't seen before..

...as well as giving them depth and interest that was already there, just not being explored.... 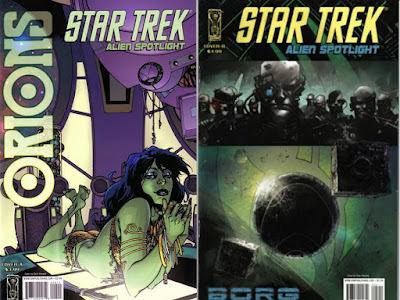 Some of those areas were explored in alien spotlights, looking at the world of Star Trek through the aliens that were encountered by the Enterprise during its original five year mission, and before, like the Orions, the Gorn, the Andorians, the Vulcans, the Klingons, the Borg and the Romulans, the Q, the Tribbles.... 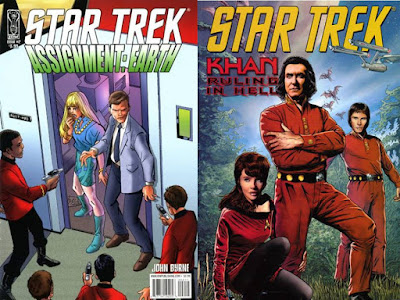 ...in other cases, readers were treated to continuing adventures of folks like Gary Seven in the 20th Century with Star Trek: Assignment Earth, or what happened to Khan after Kirk dropped him off with the contents of the Botany Bay in Star Trek: Khan Ruling In Hell.... 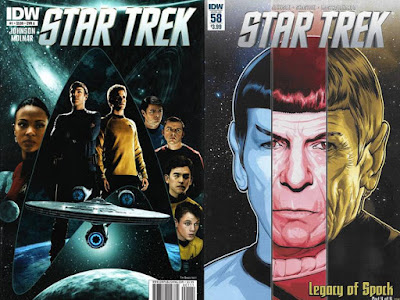 IDW even worked with a current series that was set in the time of the current movie universe, exploring Kirk, Spock, McCoy and the rest with their more modern look....starting with Star Trek #1 (September, 2011), including an encounter with Q and the Deep Space Nine crew, exploring the Legacy of Spock... 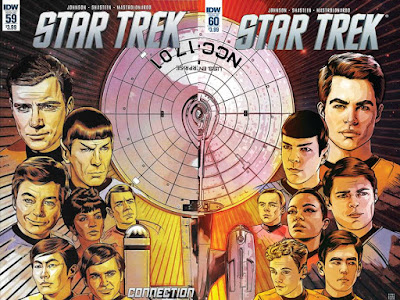 ...and ending its five year mission with meeting the original Star Trek crew in Altered Encounters with Star Trek #59  and #60 (July and August, 2016).  (But IDW has more exploring of the Star Trek universe planned......).

So much more than a five year mission for Star Trek, a very happy 50 years.....and discovery to come!
Posted by Dave's Not Here Comic Blog at 5:01 AM