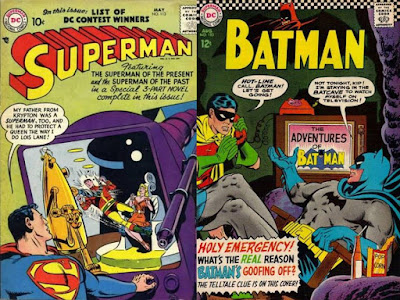 With a group of amazing heroes like they have at DC Comics, they seemed a natural fit for television audiences....


....here's a quick look at some of the earliest attempts to put Superman, Batman and Wonder Woman on your TV screens! 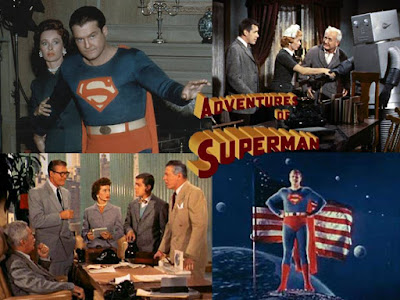 Superman was the first, starting a television series "Adventures Of Superman" on September 19, 1952 and the half an hour episode of "Superman On Earth", which summarized the destruction of Krypton, Clark Kent growing up, and coming to Metropolis to work at the Daily Planet.  After that, for the first two seasons in black and white, Superman had much more of a noir feel, fighting gangsters (and switching from season 1's Phyllis Coates to Noel Neill for the rest of the show), with George Reeves filling out the role of Superman (and Clark Kent, with a wink and a smile) through all 6 seasons.  As the show was in color starting with season three, there were more fantastic menaces, and threats were more accidents caused by professors than anything else, until the show ended with its 104th episode on April 28th, 1958, with "All That Glitters" (and Lois and Jimmy getting in on the super-powered fun!). 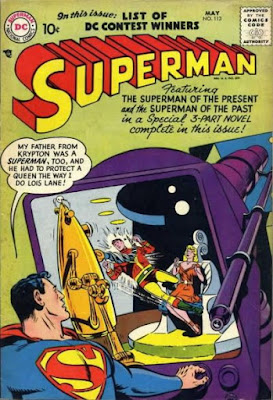 In Superman #113 (May, 1957), with "The Superman Of The Past" by Bill Finger, Wayne Boring and Stan Kaye (and the last two also providing the cover of this full length tale), Superman found his father was an adventurer on Krypton, saving the planet from the queen of the Vergoans, Latora, and her plans to destroy Krypton (Latora wasn't totally evil, as she chose Krypton because it was already doomed....so, after defeating her and her robot army, Jor-El was able to return home to warn his people, though that didn't do any good, unfortunately!). 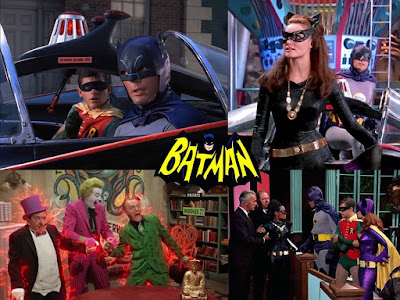 Batman was next on people's TV screens, with the series of "Batman", starting on January 12th, 1966 with the half-hour episode of "Hi Diddle Riddle" (followed by its conclusion the next day, "Smack In The Middle").  Batman and Robin pulled double duty their first two years, having two episodes a week, with the first usually involving a cliffhanger, to be resolved the next night (at the same Bat-time, same Bat-channel).  Adam West's Batman was a much lighter hero than Superman, and he had Burt Ward as Robin and Alan Napier as Alfred to confide in.  Batman also fought villains from the comics, including the Riddler, Penguin, Joker, Catwoman, Mr. Freeze and the Mad Hatter, as well as creating a few of it's own criminals like Egghead, King Tut, Shane, the Bookworm and more.  In it's third season, it was reduced down to one night a week, but added Batgirl (Yvonne Craig) to the mix, before the show ended its run with the episode of "Minerva, Mayhem And Millionaires" on March 14th, 1968, having 120 episodes (and one theatrically released movie in between seasons one and two). 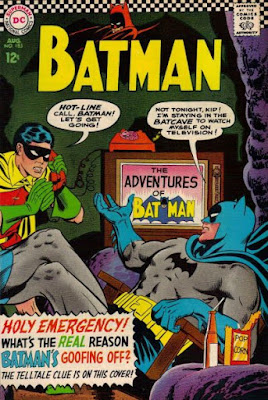 Batman comics at the time had a "new look" that had started in Detective Comics #327 (May, 1964), with a much more exciting art style by Carmine Infantino, replacing the Bob Kane look from earlier years (and adding a yellow circle around Batman's chest bat-emblem).

This proved important in the second story of Batman #183 (August, 1966) with "Batman's Baffling Turnabout" by Gardner Fox, Sheldon Moldoff and Sid Greene (under a cover by Carmine Infantino and Murphy Anderson), as a crook tried to take advantage of Robin to get into the Batcave by disguising himself as Batman, not knowing he was using the old costume design!   Holy costume malfunction, Batman! 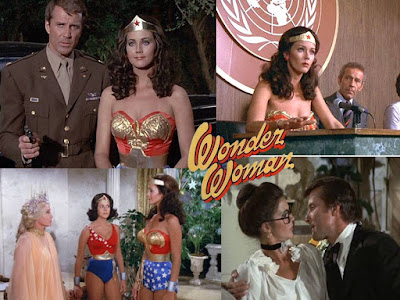 Wonder Woman arrived on TV with her original look on November 7th, 1975, as "The New, Original Wonder Woman" (differing itself from an earlier attempt with a blonde Wonder Woman earlier), and moved from telemovie to a series, with Lynda Carter as Wonder Woman, who saved World War II pilot, Major Steve Trevor (played by Lyle Waggoner, who was almost Batman in the 1960s series), and returned him to Man's World from her Paradise Island, taking on the persona of Wonder Woman to fight crime, Nazi spies and aliens (while working with Major Trevor as Yeoman Diana Prince), with a very comic book looking series (at least for the first season).  The series moved to a different network for its second and third season, with the immortal Wonder Woman returning to Man's World to help Steve Trevor Jr. (still played by Waggoner), with Diana and this Steve working for the IADC (Inter-Agency Defense Command), but still fighting leftover Nazis, criminals, aliens, and even a few mad scientists (though never any of the many foes Wonder Woman faced in the comics) to the end of her 60 one-hour episodes, ending with the "Phantom Of The Roller Coaster, Part 2" on September 11th, 1979. 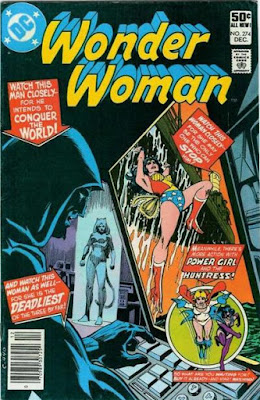 Wonder Woman had been renewed a few times in the comics even in the 1970s, and by the time of the 1980s, Wonder Woman had lost her powers, watched Steve Trevor die (twice), and had him returned to her twice (and regained her powers along the way).

With all this revamping of Wonder Woman, her foes needed a little help as well.  Kobra (a cult leader villain who briefly had his own title in the 1970s, and was more famous for having fought Batman, Aquaman and Superman before this), took Deborah Domaine, the niece of Priscilla Rich (the original Cheetah, who was dying), and transformed the girl into the new Cheetah, with a slightly new look and hoping she's be more than a match for Wonder Woman (but, it didn't work out that way) with "One Super-Villain: Made To Order" in Wonder Woman #274 (December, 1980) by Gerry Conway, Jose Delbo and Dave Hunt, under a cover by Ross Andru and Dick Giordano.

Comic book TV shows evolved, just as the comic books did over time...and more television shows followed, based on your favorite DC characters (and more looks in on them are coming soon!).

Posted by Dave's Not Here Comic Blog at 4:39 AM