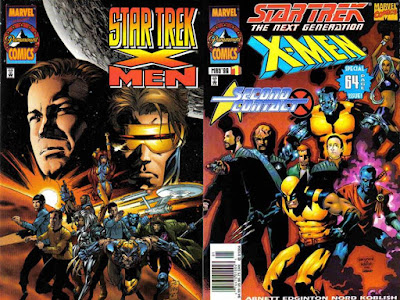 Oddly, though it might not have been a thought of many, it did happen, when Marvel got the rights back to Star Trek in the 1990s, and they had the idea of having the crew of the Enterprise meet with the students of Xavier's mansion to help kick of the line of Marvel Presents Paramount Comics! 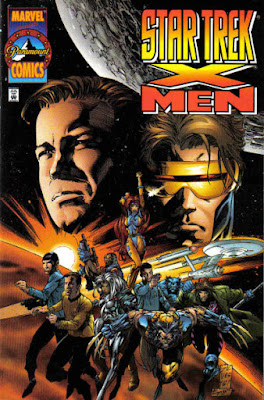 All those people to tell the tale of how Proteus (a reality warping mutant who needs human hosts to live) broke into the Star Trek universe, coming to the abandoned mining colony of Delta Vega, to find the body of Gary Mitchell, best friend of Captain James T. Kirk, whom Kirk had to kill when Gary mutated out of control, into a being who could warp reality by thought.  The Enterprise first encountered Deathbird and a few members of the Shi'Ar Imperial Guard (Marvel's version of the Legion of Super-Heroes), with the Shi'Ar ship destroying the X-Men's, and the X-Men coming aboard the Enterprise for help (especially with a wounded Gambit).  True, there was a funny meeting between Bones and the Beast (both Doctors McCoy), and Spock and Wolverine put the Vulcan Nerve Pinch against Mutant Healing Factory, and, thankfully, calmer heads prevailed, mostly with Jean Grey and Kirk working to get help from Gary Mitchell inside of Proteus....and Scotty working with Bishop to solve the problems.  Mostly, X-Men's Cyclops and Storm, and the Enterprise's Sulu, Chekov, Uhura and Chapel were window dressing as the crisis was averted, and everyone went home.  This issue was special, signifying a return to Marvel for Star Trek (with previews of their upcoming comics), as well as Star Trek's 30th Anniversary, but, super-heroes and Starfleet proved a uncomfortable mix. 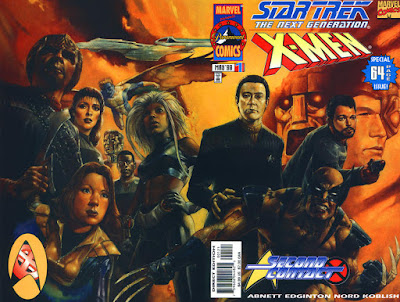 It took a little time for the next Star Trek/X-Men book....a whole generation in fact, with Star Trek/X-Men 2nd Contact #1 of May, 1998 by writers Dan Abnett and Ian Edginton, penciller Cary Nord and inker Scott Koblish, with one cover by Nord and Koblish, and a gatefold cover by Vince Evans.

This time around, it was the Enterprise-E, who ended up in the Marvel Universe just after the events of Star Trek: First Contact, meeting with the X-Men, (with Geordi facing Wolverine and Data facing Colossus, before the groups started to work together).  Kang the Conqueror (a time traveling Avengers villain) appeared, saying their histories were merging and teams had to be sent to stop it.  Picard, Troi, Colossus and Nightcrawler went to the X-Men's near future of "Days of Future Past", to stop Sentinels from killing Kitty Pryde before she could prevent this future (with Enterprise member Tasha Yar mysteriously alive here), and Worf, Data, Storm and Wolverine went to the battle of Wolf 359 against the Borg, and were aboard Sisko's ship, where deceased X-Men Thunderbird was helping the future commander of Deep Space Nine, and emissary of the Prophets).  Thing is, Wesley Crusher and the Traveller appeared to the rest of the crew and team who were waiting on the Enterprise-E...informing them that Kang lied to them, and the anomalies of living members of each team in each other's past were time's way of saving the two universes.  Riker and Banshee attacked Kang's time-ship with the Enterprise, and the crisis was averted, and supposedly everything returned to normal....except the story continued into a book instead.... 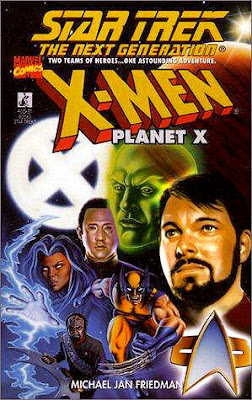 The above story continued, into a novel, the Star Trek: The Next Generation/X-Men novel of Planet X, by Michael Jan Friedman.  Continuing a comic book into a book might have seemed a novel idea, but...maybe not so much.

True, it didn't have the problems of likeness approval the comics had, but it was odd to switch from comic to book form.  This time, the Enterprise dealt with the inhabitants of the planet Xhaldia, where they were all mutating into something else, and the Enterprise crew, along with the X-Men, were there to help.  The most novel idea was that they created a holographic Professor Xavier to help (ironic, as Captain Picard was played by Patrick Stewart, who then played Charles Xavier in the X-Men movies!).  True, more of the crew and team interacted here, but it was a bit of a shift to deal with.... 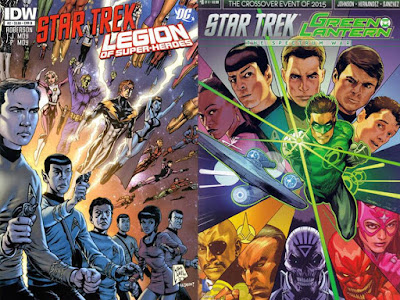 Marvel and Paramount split ways, and after a stint back at DC, Star Trek ended up back in comics at IDW, where they tried a few different team up with comic characters, this time from the DC Universe....the Legion of Super-Heroes (foreshadowed by the Enterprise crew meeting Marvel's Imperial Guard) and Green Lantern.
These put the crew and the teams on a little more equal footing, and both the Legion and Green Lantern were a little more set in space.  More on these tales....in the future!
Posted by Dave's Not Here Comic Blog at 4:32 AM