Must There Be A Superman? 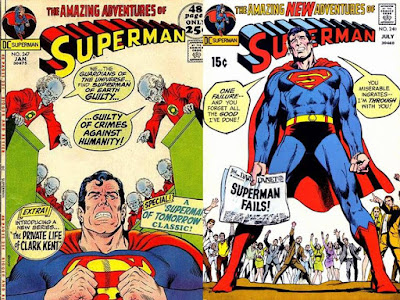 That is the question....must there be a Superman?


One has to wonder why Superman does what he does.  It doesn't seem to be appreciated by those around him....


....a look back at problems Superman had over the years. 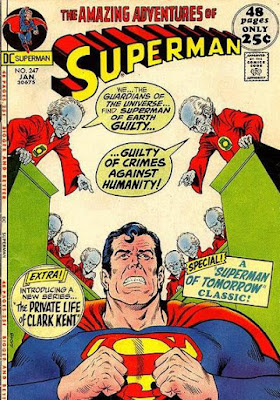 In "Must There Be A Superman?" in Superman #247 (January, 1972) by Eliot S! Maggin, Curt Swan and Murphy Anderson (under a cover of accusations by Swan and Anderson), the Green Lanterns' bosses, the Guardians of the Universe, find Superman guilty of crimes against humanity...that of holding back the progress of the human race, by doing everything for them.  This doesn't sit well with the man of steel, who then is helping out a group in a migrant camp (but then only helps them to a point, letting them find the rest of the way out of their trouble on their own). 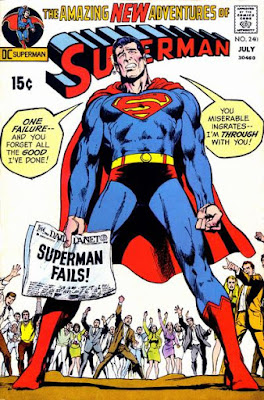 It would seem Superman isn't allowed to fail, but fail he did in Superman #240 (July, 1971) in "To Save A Superman" by Denny O'Neil, Curt Swan and Dick Giordano (under a stunning Neal Adams cover).  Due to a recent loss of power, Superman was unable to stop a building from collapsing, and the world turned against the Man of Steel for failing this one time.

This story was part of a larger arc running through the Superman titles of the day, trying to make Superman more relevant, running from Superman #233 to Superman #242, which involved Superman getting involved with people a little more, as well as losing Kryptonite as a weakness (because scientists made it inert on Earth...but they released the Quarrmer, also known as the "sand Superman", who weakened Superman....).  This story was collected in the DC Comics Classics Library: Superman: Kryptonite Nevermore of January, 2009. 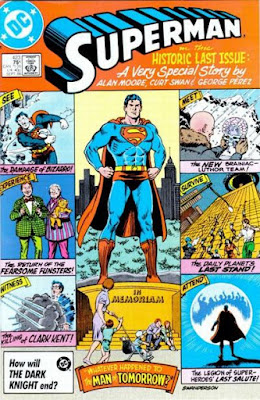 The ultimate end of Silver Age Superman came about with "Whatever Happened To The Man of Tomorrow?" in Superman #423 and Action Comics #583 (September, 1986) by Alan Moore, Curt Swan and inks by George Perez in Superman, and Kurt Schaffenberger and Murphy Anderson in Action Comics.  With a little introduction in each issue to summarize the publishing history of the titles, the adventures of Superman were coming to an end with these issues (really just getting a little face lift....being revamped after the Crisis on Infinite Earths and getting a new editor as Julie Schwartz was retiring after starting editing the Superman books with getting rid of Kryptonite attempting to make Superman relevant in Superman #233....and editing the above stories as well). 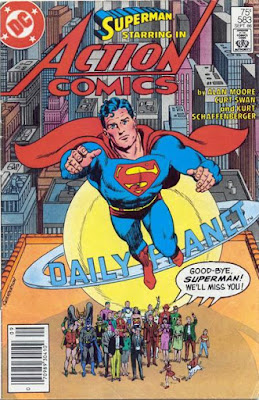 A somewhat haunting look through the last days of Superman and his friends and foes on Earth, with the majority of them not surviving the tale, with rather nasty endings for Luthor, Brainiac, Bizarro, Jimmy Olsen, Lana Lang and more...


...as Lois Lane related to another reporter as she settles in for the evening with her husband, Jordan Elliot, a quiet, unassuming man she found after Superman disappeared...nothing super about him at all, said with a wink (as the only way Superman and Lois could live happily ever after was if there was no more Superman....). 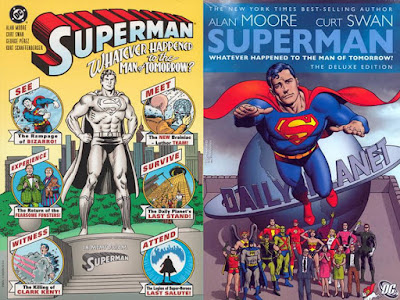