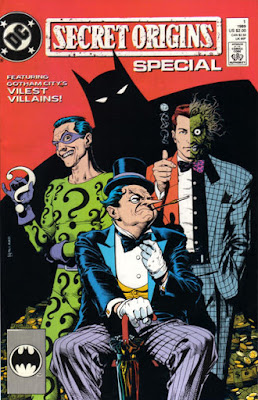 With the Secret Origins Special #1 (1989), under a cover by Brian Bolland (who had success with Joker in Batman: The Killing Joke), Batman tried to discourage documentary film maker Steve Jones from making a movie about Batman's villains (in the linking story of "Original Sins" by Neil Gaiman, Mike Hoffman and Kevin Nowlan)...and what follows was suppose to be 3 stories about the origins of Batman foes Penguin, Riddler and Two-Face (as well as why Batman warned off the filmmaker.....with a behind the scenes appearance of the Joker for extra emphasis, no less).

A little on the beginnings of these villains as presented in this issue (and a little more as well!). 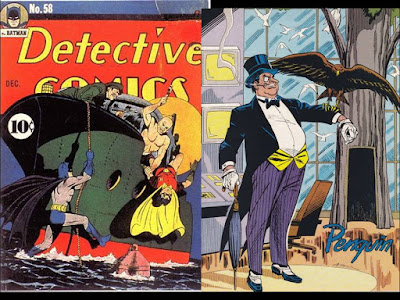 Oswald C. Cobblepot first appeared in Detective Comics #58 (December, 1941) by Bill Finger and Bob Kane, and was drawn in the DC Who's Who (packet 5 of the looseleaf version of 1990) by Jim Aparo.

In "The Killing Peck", Oswald was getting revenge on an old nemesis from earlier in his life, who tortured the boy who loved books and birds, making him eat fish and wear a suit, leading him down the route to becoming the Penguin in this story by Alan Grant and Sam Keith. 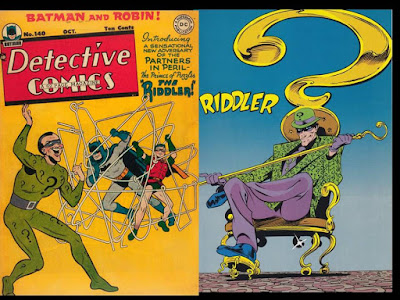 Edward Nigma came to be in Detective Comics #140 (October, 1948), by Bill Finger, Dick Sprang and Charles Paris, but didn't become a bigger Batman villain until the 1960s, with the DC Who's Who (packet 5 of the looseleaf version of 1990) by Kieron Dwyer and Dennis Janke).

When is an origin not an origin?  When it's "When Is A Door" by Neil Gaiman, Bernie Mireault and Matt Wagner, with the film crew following the Riddler through an old warehouse full of oversized novelties (once a feature of Batman comics in the 1950s), and the Riddler making odd commentary on it all, leaving his origins a question. 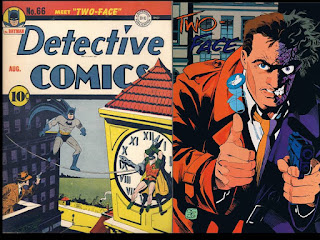 Harvey Dent flipped into Batman's life in Detective Comics #66 (August, 1942) by Bill Finger and Bob Kane  (though he was Harvey Kent back then), and was rendered in the the DC Who's Who (packet 11 of the looseleaf version of 1991) by Chris Sprouse and Dick Giordano.

Two-Face was almost portrayed as a hero in the untitled story in the Special, by Mark Verheiden, Pat Broderick and Dick Giordano (and he is only a coin flip away from being one, after all).  Still the district attorney who had acid thrown in his face by Boss Maroni, this story explored how Two-Face could be a hero, saving Grace (who was the one telling this Two-Face story to Steve Jones), and how he saved her from Dalton Perry (a criminal who was looking for revenge against Harvey, by kidnapping Grace). 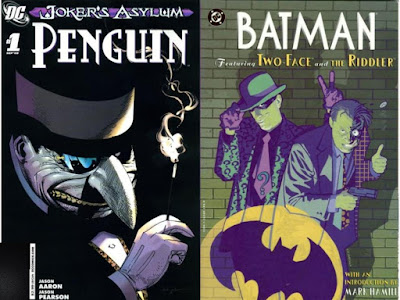 A nice collection of tales, featuring some of Gotham's greatest criminals, which, when they first appeared in the Golden Age, only had Batman in common, but this Special started a slight link between them....something that has been built on upon the years, and continues to this day!
Posted by Dave's Not Here Comic Blog at 3:29 AM