Star Trek: The Next Generation End And Begin 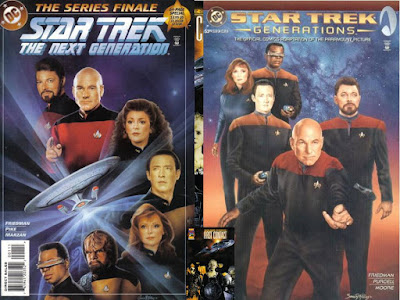 Gene Roddenberry's Star Trek, the original series, ended with little fanfare after its 79 episodes (counting "The Cage"), but it survived, growing into a movie franchise that became quite successful.  So successful, that the idea of Star Trek: The Next Generation happened, leading to 7 seasons of going where no one has gone before....then four movies involving that cast as well, and quite a few comic books as well.

Star Trek: The Next Generation also had a few adaptations, that of the two hour season finale of it's show, and of two of its movies....and here's a little more information on those! 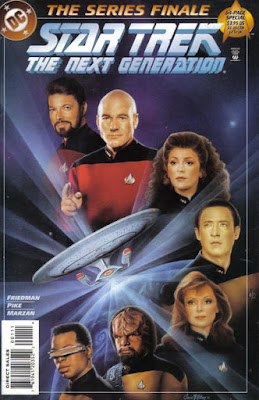 The last two episodes of Star Trek: The Next Generation written by Ronald D. Moore and Brannon Braga dealt with Picard being bounced through time by Q, to just before the first episode of The Next Generation ("Encounter At Farpoint"), the current time of the series and about 25 years in the future.

The comic adaptation came out in June, 1994, being written by the regular comic series writer of Michael Jan Friedman, with art by Star Trek newcomer of Jay Scott Pike (creator of Dolphin, so he was at least an experienced artist, but one who had given up on the monthly comic grind) and inker Jose Marzan Jr., and a beautiful cover by Sonia Hillios.  Sadly, the adaptation lacked a little depth, and was the only episode adapted into comic book form. 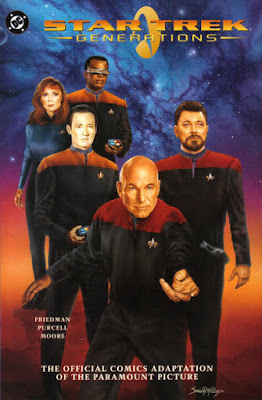 The Next Generation made their first foray into the movies with Star Trek: Generations by Rick Berman, Ronald D. Moore and Brannon Braga, this followed the crew of the Enterprise-D past the season finale, and also chronicled the last days of Captain James T. Kirk (both in the 23rd and 24th Centuries), including a battle against Soran (and the android, Data, getting emotions).

The comic adaptation came out at the time of cover dates of January, 1995, being written by Michael Jan Friedman, and art by Gordon Purcell, inks by Jerome K. Moore and Terry Pallot, and a cover by Sonia Hillios.  While looking more like the regular comics, the adaptation also suffered (most notably by the lack of Kirk on the cover.....as the only team-up of Kirk and Picard, one would have wanted to see that....then again, not the comics fault, as the Next Generation was being positioned to take over from the original cast; the comic followed the movie, and any faults in this book were more from the overworked Star Trek offices, who were producing all this too quickly).  There was a regular version of the comic, and a deluxe (pictured at left)... 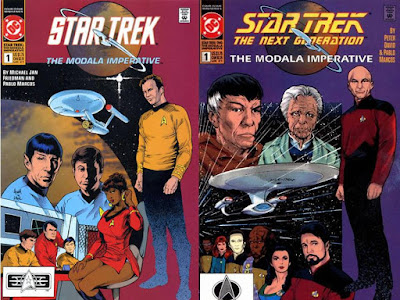 ....look for the deluxe, as it also includes cast information and a little on the difficulties of comic book adaptations!

This also makes one wish for adaptations of episodes "Unification" (with Spock), and "Relics" (with Scotty)....but, such has yet to happen (though the Modala Imperative did tease a little, with the original Star Trek cast facing an unknown menace in a four issue mini-series, to be followed by the Next Generation dealing with that menace in its time, with a little help from Spock and McCoy.....perhaps more of the original/Next Generation team up the fans would have liked to have seen!). 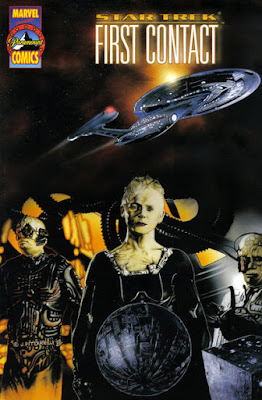 By the time of Star Trek: First Contact, Marvel had the rights to Star Trek comics (under the Paramount Comics banner), so they produced the last movie adaptation of Next Generation.  Star Trek: First Contact had all the elements popular to Star Trek....time travel, the Borg, Data, Picard, even tying into the original series with Zefram Cochrane and the early days setting up the Federation (with the first meeting of humans and Vulcans and Earth's first Warp flight), all written by Rick Berman, Brannon Braga and Ronald D. Moore (a little less under deadline doom than when making Generations).

The comic adaptation was written by John Vornholt, with art by Terry Pallot and Rod Whigham, inked by Phillip Moy, and a cover by Jeff Pittarelli and came out in November, 1996.  The only real problem with this issue, was that by this time, VCRs were quite popular, and the need for comic adaptations were lessening (as one could now bring the movie home easily... 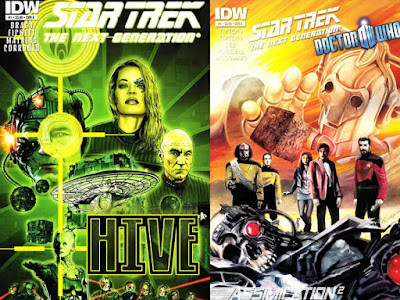 .....a process even made easier by DVDs, cable and digital downloads....and shown by a lack of adaptions for Star Trek: Insurrection and Star Trek: Nemesis, though to be fair, it may have been because of Star Trek comics jumping license at the time...perhaps IDW might go back to revisit these voyages of the Next Generation....or go....beyond!).

Posted by Dave's Not Here Comic Blog at 3:38 AM