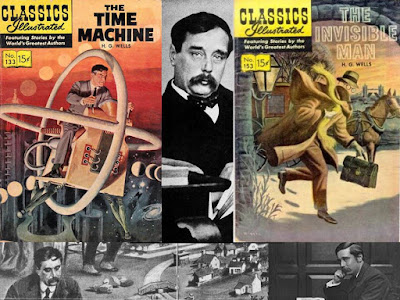 Author H.G. Wells (Herbert George Wells) was born September 21, 1866 (and passed on August 13, 1946)....and, among many other works, wrote The Invisible Man and The Time Machine (two concepts that have played out in comics time and time again...)

With these classic covers from Classics Illustrated, we remember H.G. Wells! 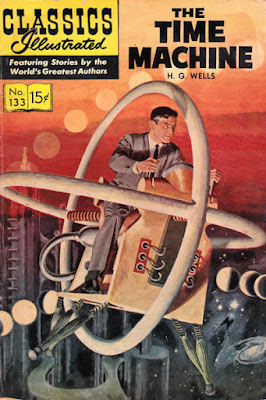 From Classics Illustrated #133 (July, 1956), comes the tale of the Time Machine, with a cover from George Wilson, Lorenz Graham handling the adaptation, and Lou Cameron working on the interior pencils and inks of this book...


...relating the tale of the author, his travels in time with a machine of his own invention, going forward into danger, and meeting with the Morlocks and the Eloi (as well as friendly native Eloi girl, Weena, whom the narrator of this tale grows quite fond of....) in the future... 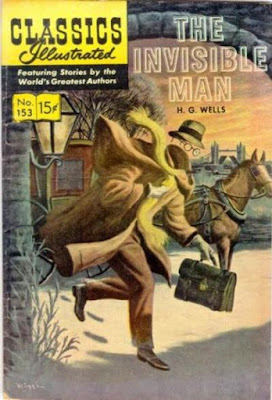 From Classics Illustrated #153 (November, 1959), there is the story of the Invisible Man, with a cover by Geoffrey Biggs, and interior art by Norman Nodel (though no one is listed as taking credit for the adaptation of the story, so whomever adapted this is an invisible man)...


...this story deals with a man named Griffin making himself invisible, then he terrorizes the countryside as the formula that made him invisible slowly drives him mad.