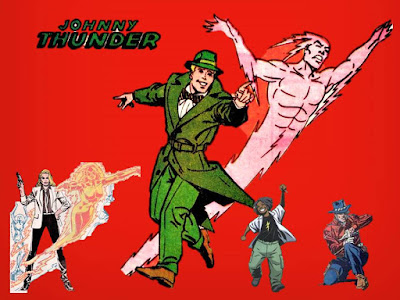 Say, you know today, July 7th, is the birthday of Johnny Thunder?

Johnny is a Golden Age superhero (or, as they were called back then, mystery man), who premiered in Flash Comics #1 (January, 1940) by John B. Wentworth and Stan Aschmeier.  Johnny was born in the Bronx, on the seventh day of the seventh month on a year that ended with seven (1917), but kidnapped by the High Priest of Aissor to be taken to the country of Badhnisia. 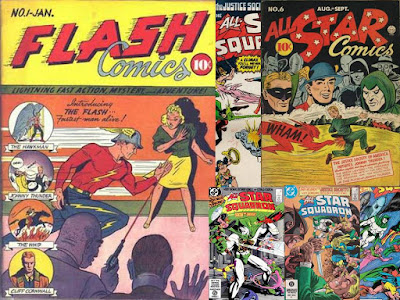 There, he was given power over the Thunderbolt called Yz with the phrase Cei-U (which, sounds like "say, you"), and Johnny could control when he uttered the T-Bolt's control phrase and command to do whatever Johnny could think of (but Johnny wasn't exactly a deep thinker).  Johnny joined both the Justice Society of America and wartime All-Star Squadron, and worked tirelessly for the good, surviving many a Crisis....and even appearing recently in DC Universe: Rebirth #1 (July, 2016), though you might not have recognized the old man without his Thunderbolt.

Johnny wasn't the only one to weld a Thunderbolt!  Here's a look at a few others.... 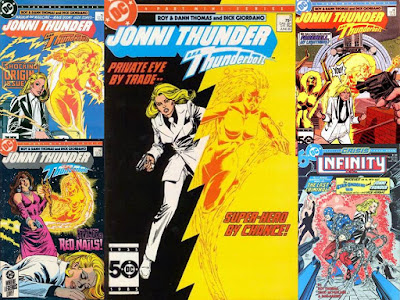 Jonni was a west coast detective who lived an ordinary life with her '57 Thunderbird...at least until a laser blast hit an old statue of her dad's....and Jonni was able to manifest as an energy being similar to lightning, with all its properties, while her body was unconscious. 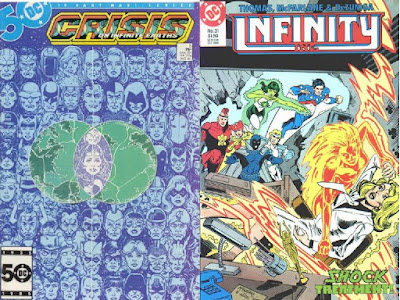 Still had to solve crimes, though her new ability with the Thunderbolt helped, and at least for the mini-series, lived without other super-heroes, though Jonni make it to the Monitor's satellite (and cover of Crisis On Infinite Earths #5, next to the Golden Age Flash and above Psycho-Pirate) and did participate at a detective's convention in Crisis On Infinite Earths along with Harvey Bullock and Christopher Chance (the Human Target), in a case involving Angle Man's Angler (and helping the Star-Spangled Kid fight original Green Lantern foe, Knodar, the last criminal, in Infinity, Inc. #24 from March, 1986, placing Jonni on Earth-2....for as long as Earth-2 lasted after Crisis). 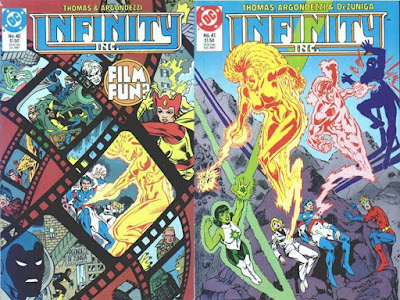 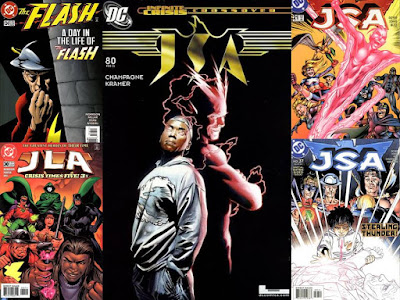 Jakeem Thunder or J.J. Thunder ended up being the alias for Jakeem Johnny Williams, who first appeared (though not named) in Flash #134 (February, 1998), as the Golden Age Flash was looking for the Thinker's Thinking Cap, and Johnny Thunder had turned it into a flower pot at the old age home he lived in.  Johnny also had his Thunderbolt in a pen, which J.J. took, which led to JLA #28 to #31 (April to July, 1999) by Grant Morrison and Howard Porter, where Jakeem helped against an invasion from the 5th dimension, that occupied the JLA and remainders of the JSA (Flash, Wildcat, Green Lantern, Wonder Woman/Hippolyta and the Spectre-force without Jim Corrigan), as well as Captain Marvel face Thunderbolt Lkz, with J.J. releasing Yz, eventually merging Lkz with Yz, giving Jakeem the ability to control the combined Thunderbolt with the phrase, "So Cool", and this Crisis Times Five also led into the reformation of the JSA during the Day of Judgment and the JSA's battle with Mordru. 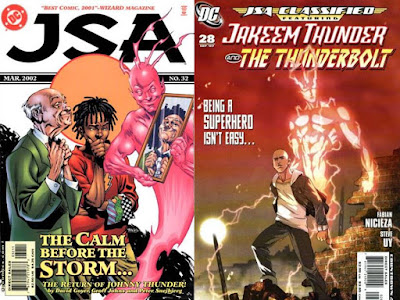 Jakeem's most important storyline ran from JSA #32 to #37 (March to August, 2002), where Earth was threatened by the Ultra-Humanite (secretly in control of Johnny Thunder's body), who uses the T-Bolt to change the world into one of his liking!  During the course of the battle to regain the world, Johnny Thunder suffers fatal wounds, yet merges with the Thunderbolt to become "Johnny Thunderbolt"....with J.J. Thunder now in charge of the combined Johnny and Yz!  Soon after this experience, Jakeem joins the JSA. 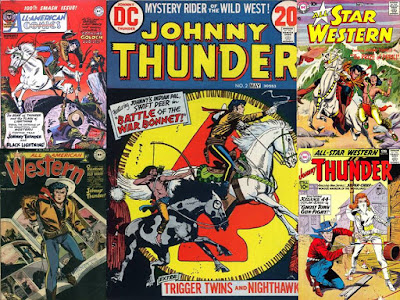 John Tane was the son of a sheriff and teacher, and wanted to honor them both, but his mother didn't want him participating in the violence western law required.  So, John came up with the identity of Johnny Thunder to fight evil, and did so with his horse, Black Lightning, starting with All-American Comics #100 (August, 1948) by Robert Kanigher and Alex Toth.  Johnny stayed with the title, even when it changed to All-American Western with #103 (November, 1948, losing super-heroes like the Golden Age Green Lantern), staying there until All-American Western #126 (June-July, 1952), where the title changed after to All-American Men of War, and Johnny's feature continued in All-Star Western with #67 (October-November, 1952), though the Trigger Twins (another western feature) kept most of the covers though, with Johnny getting a few, and all towards the end, with All-Star Western #119 (June-July, 1961), with adventures from the 1850s and 1860s. 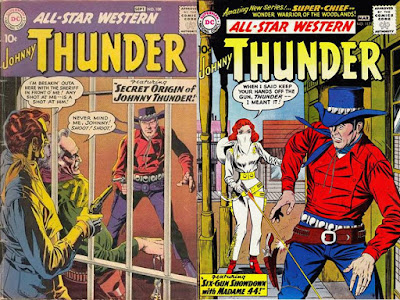 Johnny updated from his brown western duds to a red and blue outfit in All-Star Western #108 (August-September, 1959), met Madame .44 (Jeanne Walker) in All-Star Western #117 (February-March, 1961, coincidentally the same issue that the Super-Chief first appeared in a separate story, set in the 1490s).  Madame .44 fought with Johnny for his last three appearances, but ended up marrying him, and having kids, as revealed in DC Comics Presents #28 (December, 1980), and even appeared in the Crisis on Infinite Earths of 1985 (though it was 1885 from Johnny's point of view), where he worked with Jonah Hex, Scalphunter, Bat Lash and Nighthawk.  Johnny and Madame .44 also teamed up with Super-Chief, the western El Diablo and Jonah Hex, as well as Firehair and Hawk (son of Tomahawk)....the last two at the end of their careers, all to deal with Swamp Thing (at a time set between the flashback and main story of DC Comics Presents #28) in Swamp Thing #85 (April, 1989).  All of which shows that a western focused article should come on soon... 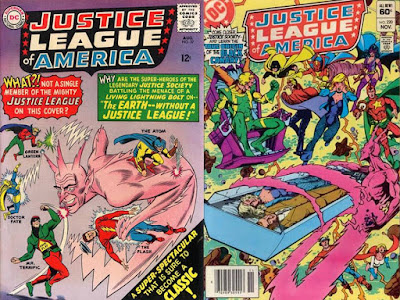 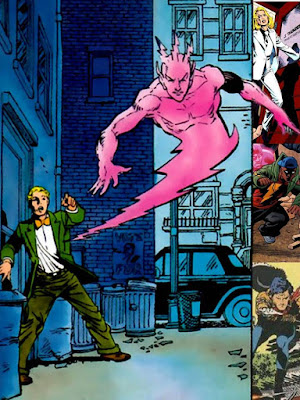 Johnny also had Bahdnesian Kiku Thunder, who was in the 10 issue Justice Society of America series of the early 1990s (with Jesse Quick), and Willpower (William Twotrees) who was revealed to be Johnny's son in issues of Primal Force, but these characters never really broke out of those series, so will likely get more coverage when those series are covered.


Say, you want to find out more about the original Johnny Thunder?  Read a little of his Justice Society history here, and where to find reprints of his individual Golden Age stories here!

Posted by Dave's Not Here Comic Blog at 4:07 AM