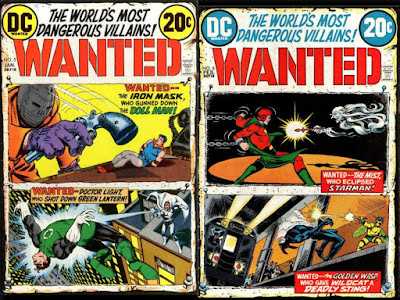 Even more of the E. Nelson Bridwell goodness that was the 1970s reprint magazine called Wanted The World's Most Dangerous Villains....

...here with the fifth and sixth issue of that series, mostly wonderful little treats from the Golden Age, with foes of Doll Man, Starman, Sargon and Wildcat, but it starts off with Green Lantern's battle against JLA foe Dr. Light....before going on with Iron Mask, Mist, Blue Lama and the Yellow Wasp!

Wizard Of The Light-Wave Weapons 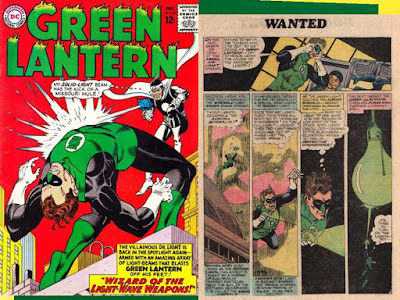 First up, from the first story reprinted in the fifth issue is Green Lantern #33 (December, 1964) by Gardner Fox, Gil Kane and Sid Greene (under an original cover by Gil Kane and Murphy Anderson), is the battle between Green Lantern and Doctor Light!

Hal Jordan, the alter ego of Green Lantern, starts the issue by facing himself over an award....but, that might be jumping ahead to much.  A little bit earlier, Hal and his pal, Thomas Kalmaku, were getting ready for the trophy presentation as Ferris Aircraft when Coast City was suddenly overcome by an Aurora Borealis, prompting Hal to investigate as Green Lantern. 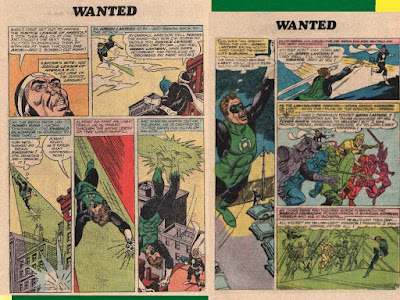 Over the city, Green Lantern found Doctor Light, who was trying out his new light weapon, the Lightolater, and sends Green Lantern crashing into the ground, unconscious.  Green Lantern's ring keeps him from hitting the ground, but when Hal revives, Dr. Light is gone.  So, back at Ferris Aircraft, Hal prepares for the gala again, as his ring is searching for Dr. Light. Sadly, it finds the doctor just as Hal is going to accept his award, so he power ring's Tom into a "Hal duplicate" to get the award, so Green Lantern can face Dr. Light.  Dr. Light uses his weapon to send a VIBGOYR army after Green Lantern (light constructs as warriors based on the seven colors of the spectrum).  Hal only has trouble with the yellow one, but successfully turns it against Dr. Light and defeats the villain.  Hal returns to the gala, finding Tom as Hal, turns him back to Tom, and they exchange how their respective evenings went (with Hal dropping a lot of knowledge on light phenomenon as well).

Dr. Light first premiered fighting the JLA, with that story being reprinted many time, including in a JLA Giant, and then faced the Atom, in a story that has been reprinted a few times (including in an Atom Archive) as well.


The Man In The Iron Mask 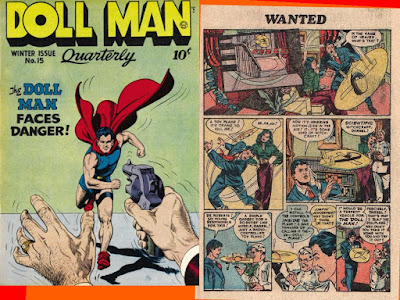 The second story of the fifth issue is from Doll Man #15 (Winter, 1947) by William Woolfolk and Alex Kotzky (under an original cover by Al Bryant), with the mighty miniature Quality hero of Doll Man fighting against the dangerous menace of the man in the Iron Mask!

Darrell Dane was being tormented by a model plane, but it was an invention of Dr. Roberts, the father of his girlfriend, Martha, who suggested that this could be a weapon in Doll Man's arsenal, being the Dollplane!  Darrell couldn't wait to try it out as Doll Man, and used it to stop mob boss Don Vittorio, who looked like he perished in a car crash off a bridge into a river.  But, Don survived, burned badly, to find a kindly hermit who helped nurse him back to health (and showed off his collection of metal masks with key locks). 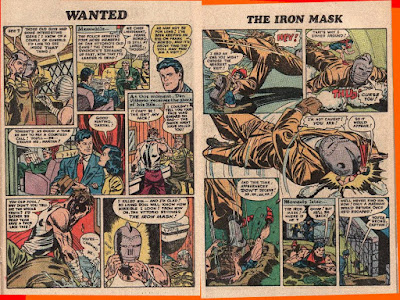 Taking off his bandages, Don saw he was burned, killed the old man and vowed to live under an Iron Mask.  Doll Man was going after Frank Morbo (who had taken over the Vittorio mob), but was beaten there by the Iron Mask, who killed his former lieutenant, and took control.  Doll Man showed up, but was beaten by a headbutt from the Iron Mask.  Iron Mask then left Doll Man to drown in a fish tank, but Doll Man escaped that trap.  Doll Man then faced Iron Mask at the home of a stamp collector, but Iron Mask escaped the ground, but Doll Man wouldn't follow.  Waiting, Iron Mask returned and Doll Man stopped him.  Iron Mask had lost the key to his mask, and had to return or he would have starved in his mask.

Doll Man had a few reprints of his Quality tales in the Super Spectaculars of the 1970s, with new stories as a part of the Freedom Fighters to follow soon. 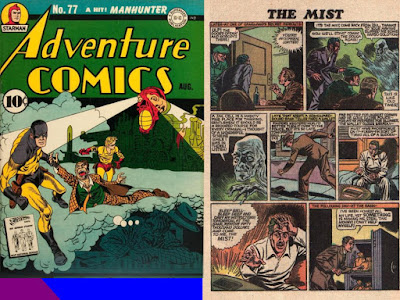 Starting the sixth issue off by shining bright with the Starman story from Adventure Comics #77 (August, 1942) by Gardner Fox and Jack Burnley (under a Sandman cover by Jack Kirby and Joe Simon), as astral avenger faces the return of his most tenacious foe, the Mist! 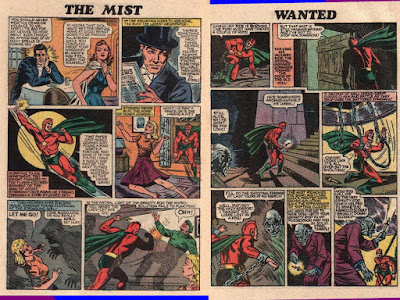 Starman's foe, the Mist, escaped from jail after one of his henchmen, Whitey, had slipped him some of his inviso solution, so the Mist turned his cell invisible and escaped in the confusion.  The Mist had a new plan, using items people would find to hypnotize them into stealing for him.  This plan was fouled by Honey Jenkins, who tried to return her item to the police.  Ted Knight heard of these odd thefts from his fiancee, Doris Lee, and went to check out Honey as Starman.  Good thing, as the Mist's men were trying to kidnap Honey, to prevent her from revealing the plan.  Starman went to the Mist's new windmill headquarters, where he faced a few traps, and even had his gravity rod taken from him by the Mist, but was able to beat his foe with some reflected light.

The Mist had previously faced Starman once, returned again as Starman teamed up with Black Canary, then the Mist represented himself as a Black Canary foe in a battle with the JLA and JSA as a member of the Secret Society of Super-Villains..

The Man Who Met Himself 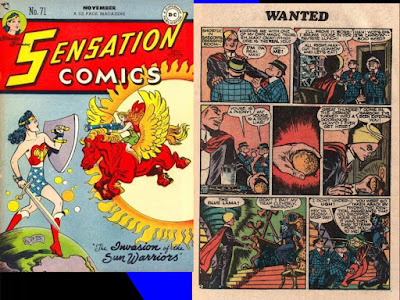 A nice surprise for the sixth issue, as this Sargon the Sorcerer tale from Sensation Comics #71 (November, 1947) by John Broome and Paul Reinman (under an original Wonder Woman cover by Harry G. Peter), facing off against his regular foe, the mysterious Blue Lama.


Sargon the Sorcerer was finishing his onstage magic show when he was met by two versions of his assistant, Maximillian O'Leary. 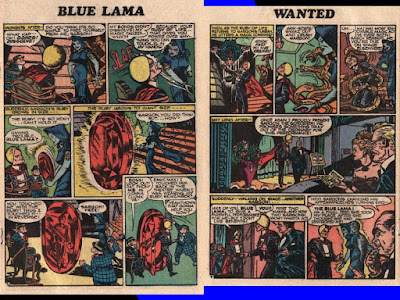 Taking the two backstage to solve the mystery, Sargon is thrown into the otherdimensional world of his foe, the Blue Lama.  She took advantage of Sargon's confusion to draw him into her world.  She had him tied, unable to use his Ruby of Life (as he couldn't touch his bonds to control them), but he could control his Ruby of Life as she tried to take it from him.  This allows him to get free, where he escapes the Blue Lama and the Max doppleganger to return to the stage.  There, he faces his own duplicate....the Blue Lama in disguise!  The two battle, and she retreats, to face Sargon again.

Sargon was a member of the All-Star Squadron, but mostly featured in Golden Age comics, with a few reprints in the 1970s, as well as appearing in the Flash as a villain, and helping out in a JLA/JSA adventure involving Black Canary. 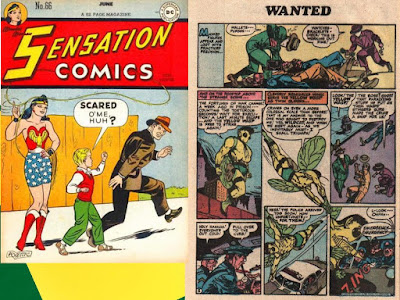 Last, but not least, taking a swing in the sixth issue, is a reprint of a  Wildcat story from Sensation Comics #66 (June, 1947) with no known writer and art by Joe Kubert (also under a Wonder Woman Peter cover), where he faces off against his old foe, the Yellow Wasp.


A crowd was attacked by giant wasps, and it was from an old foe of Wildcat's, the Yellow Wasp, who had escaped jail. 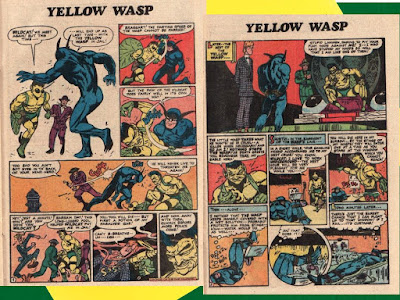 The Yellow Wasp challenged police, until a radio call hit the office of Stretch Skinner, detective pal of boxer Ted Grant, with Stretch going into action (allowing Ted to change into Wildcat, and pursue his foe as well).  Wildcat and Stretch were captured, with the Yellow Wasp planning to kill Wildcat by flooding a room he was in with water.  Wildcat remained calm and floated on the water until he could reach a roof skylight and escape.  Wildcat had to find the Yellow Wasp, who was to leave Stretch to die on a subway track, but Wildcat found and freed him, then defeated the Yellow Wasp, throwing him back in jail.

The cover of the Wanted issue had the villain listed as the Golden Wasp, which caused confusion for years, but a Golden Wasp, who was the protege of the Yellow Wasp, faced Wildcat as as member of the Injustice Society in the JSA's 2000 revival. 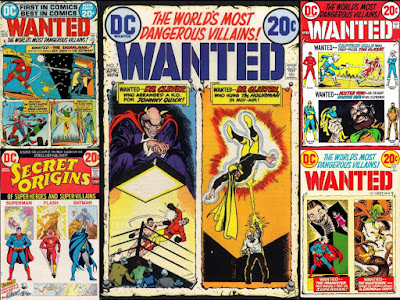 The letters' pages still teased the idea of new villain stories in Wanted (which never did happen), along with letters about the first two issues, Golden Age stories like in the third and fourth issue, and let readers know of a new series of Secret Origins due out soon, also edited by E. Nelson Bridwell, with a first issue that had a Hawkman story facing the Gentleman Ghost (who would appear in the next issue of Wanted).